Driving out of Lima we headed south following the coast and arrived at the town of Paracas around 10am. At a small jetty we were loaded into an already crowded boat for a trip out to the Ballestas Islands. I was sitting with Gavin, one of the new guys, near the front of the boat in amongst a group of Peruvian students while Keryn was with the rest of the Kumuka group at the back of the boat.

It took about ten minutes to reach a point offshore where we stopped to look at a pre-Inca carving visible on a sand dune. It was huge but I missed the significance as Gavin and I got the Spanish explanation. Once the explanations were done it was out to the offshore islands, a thirty minute ride. 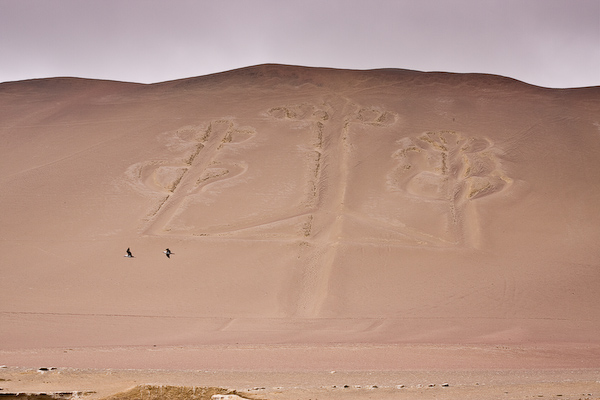 The pre-Inca carving on the dune

The Ballestas are called the poor mans Galapagos and we soon found out why. The islands were teeming with birdlife, tens of thousands of Peruvian boobies, cormorants, Inca Terns, Pelicans and other birds were roosting and flying about. This is also the only place to find penguins in Peru. Guano is harvested periodically from the islands and we saw many structures used in the loading of the excrement onto boats. There is always at least one person on the island and we waved to the man looking at us through his binoculars from a wooden hut. 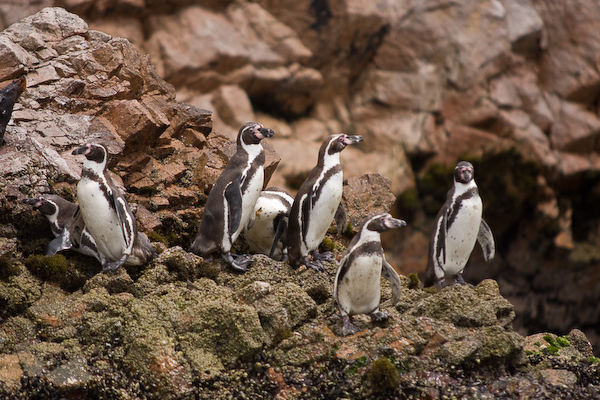 Penguins on the Ballestas Isles 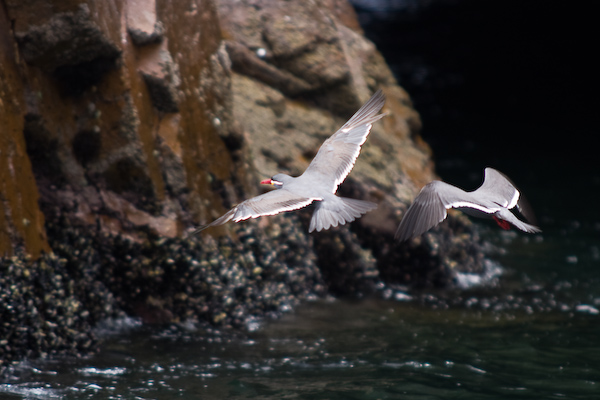 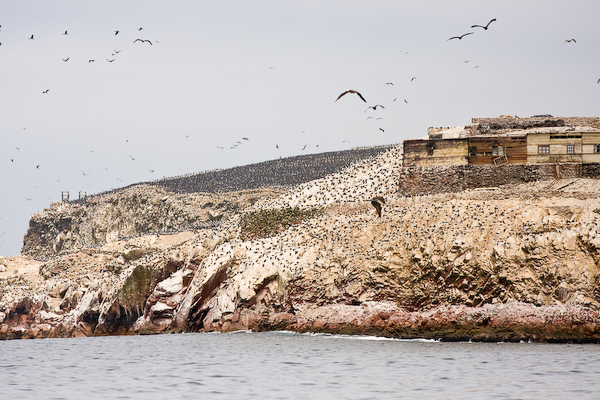 Lots and lots of birds

There are also many sea lions that call the islands home and we went past a beach that is the domain of young males that have not yet got their own harem. The inquisitive mammals were constantly popping up near the boat, checking us out and then diving under the swell. It was an interesting visit that turned sour when one of the engines overheated and stopped. The return to Paracas was painfully slow, most passengers hiding under what shade they could fashion out of the clothes we had with us. It was very much a poor version of our Galapagos trip. 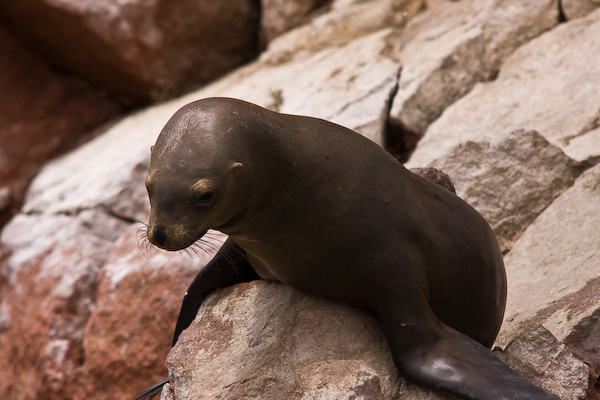 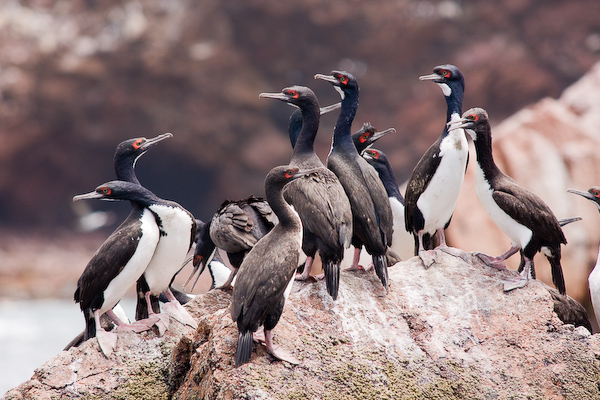 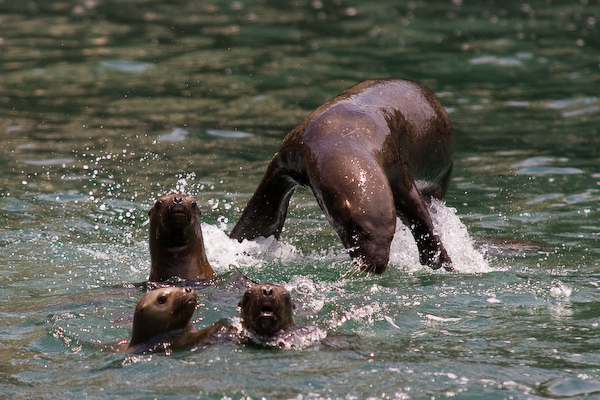 Sea lions checking out the boat

From Paracas we drove on to the desert oasis of Huacachina. In times past this was an exclusive resort town around the small lagoon hidden in amongst the huge surrounding sand dunes. It’s quieter now but still a pleasant place to visit. We unpacked into our hotel and got ready for a late afternoon sand buggy ride and sand boarding adventure. Most people relaxed around the pool and tried to talk to the resident parrots. 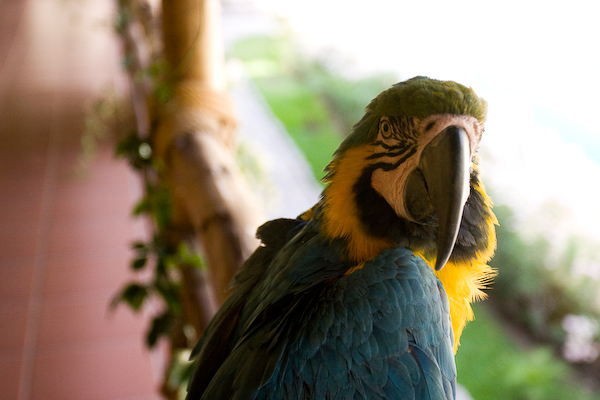 There were two buggies, each a supercharged monster of a vehicle that sounded like a drag racer once it got going. We set off and were taken into the dunes, charging through the sand up the sides and racing down the reveres slopes. Reaching one peak we stopped and this was where we had our introduction to sand boarding. We were each given a snowboard and shown how to lie down and hold on, steering and braking with our feet. Rhys went off first, running at the slope and diving onto his board to slide at great speed to the bottom. With varying levels of confidence we all followed suit and by the time we were all at the bottom we were all converts. The best bit was the buggies followed us down so we didn’t need to walk back up the dune. 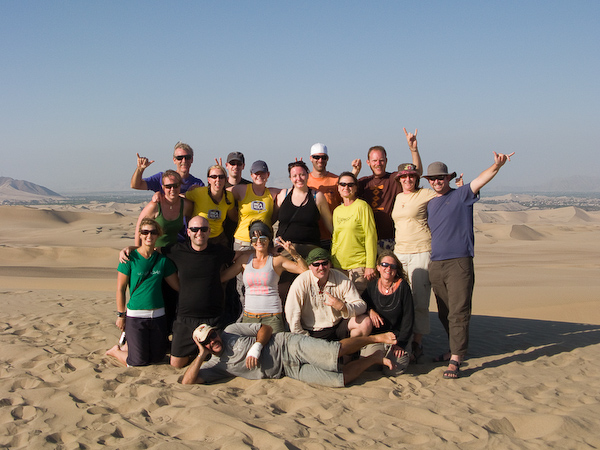 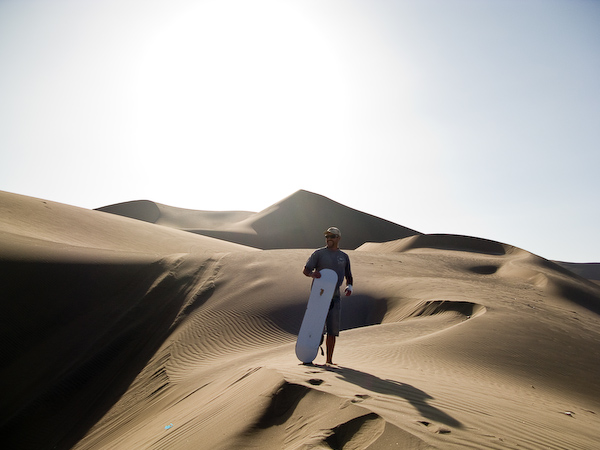 Rhys prepares to show us how it’s done

The buggies got faster and the dunes taller. One ride saw us starting on a small dune atop a larger one, sliding down and trying to get enough speed to take us over the second lip. Danny had a couple of spectacular falls. cart wheeling down the lower part of a dune in a tumble of sand and limbs. Thankfully he was OK, as were Kerry (almost as spectacular) and Keryn (not nearly as spectacular) when they also came off. There were a few sunglasses scratched and broken and Rhys did his best to lose a Zippo lighter we had given him the day before but thankfully I found it in the sand near where he had started his run down a large dune. 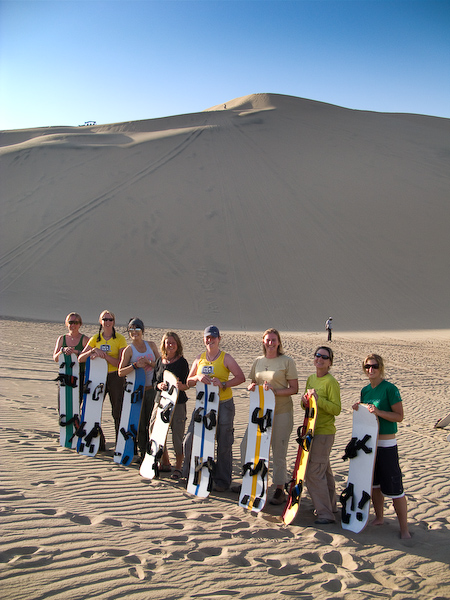 It had to end but not before our buggy squeezed in one last dune run, the other heading off to the sunset viewpoint. We raced along the sand in the buggy and were rewarded with an orange globe still hanging above the dunes on the horizon. We stood and then sat watching the sunrise, a great end to a day that hadn’t started off the best. 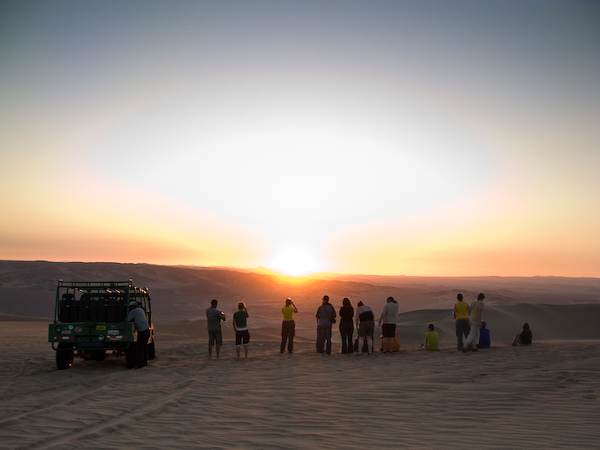 Sunset on the dunes

Back at the hotel Rhys and us Wallahs prepared a BBQ. We were very pleased with the heat being generated by the coals on the BBQ but made the mistake of leaving them too long before starting to cook. It was Angie who eventually pointed out that the meat would cook faster if we closed the lid on the BBQ. Dinner was served late but thankfully was tasty. 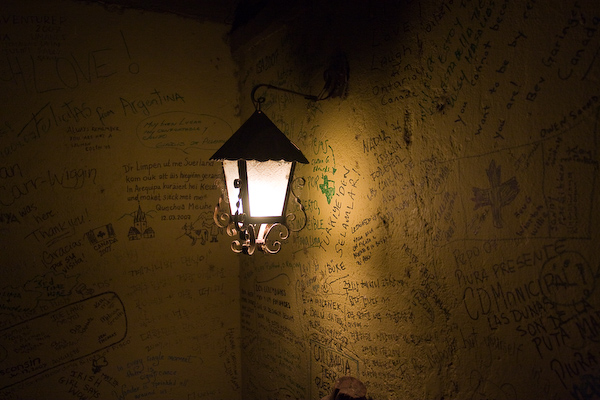 A graffiti covered wall at the Hotel 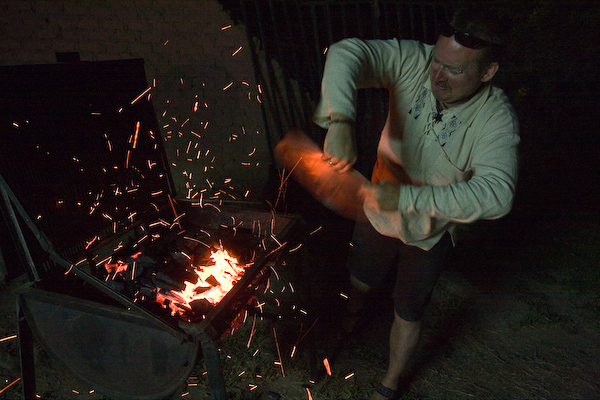