We had another hotel to move to today but we decided to have a sleep in before we moved the few blocks to the next place, the Alston Inn Hotel. When we got to the hotel the room wasn’t yet available so we left our bags behind reception and then sat down to decide what to do with our day. Shaun and Michelle were also in reception doing something similar and in the end we all decided to go together to the Quito old town. Before this we had breakfast.

We ate at the Magic Bean restaurant and breakfast was large and very good. Keryn and I both got pancakes, each receiving two giant pancakes on our plate, Keryn couldn’t finish hers. Shaun ate with us and Michelle came back to the restaurant after moving her bags and we were also joined by Karrie, one of the two Irish woman. The other Irish, Sophie, was also at the restaurant. She hadn’t yet had any sleep having been partying all night but seemed to be feeling OK.

Once we’d eaten we walked up a few streets to find a bus. At the bus stop we found out that the buses weren’t running in the direction we wanted so we got a taxi instead. I was lucky enough to have the front seat, the other four awkwardly piled up in the back seat. The drive wasn’t too long and we were soon pulling up beside our chosen first stop, the Basilica del Voto Nacional.

The Basilica is a large church mostly constructed out of concrete. The main doors, at various points of entry, were all bronze and had intricate decoration. We found our way inside and wandered around. Strangely many of the alcoves that would have normally held statues or other monuments were empty with just a couple of metal pegs sticking out of the ground. The whole place had a feel of being repaired, especially once we got upstairs. 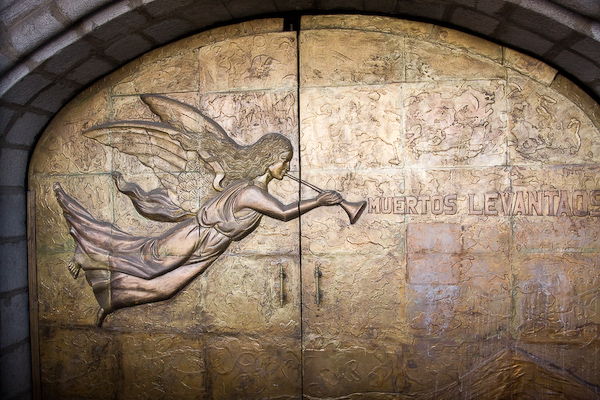 One of the bronze doors on the Basilica del Voto Nacional

I had read that it was possible to climb the two Church spires so we walked around until we found the stairs. We paid $2 each and then started walking up the wide concrete staircase. There were a number of levels, the first leading to a large balcony where it was possible to look down into the Basilica towards the altar. A large rosetta stained glass window was also on this level, a few of the panes missing. 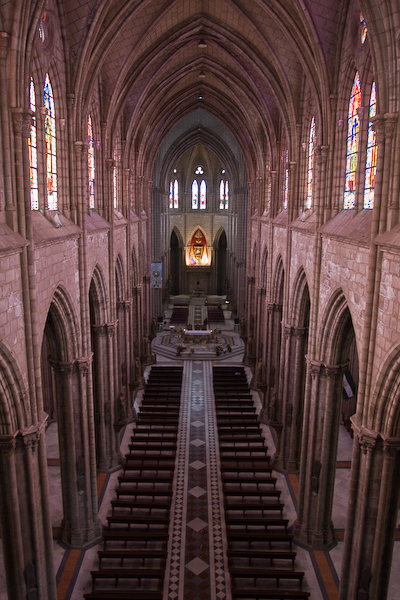 Looking down into the Basilica from the balcony 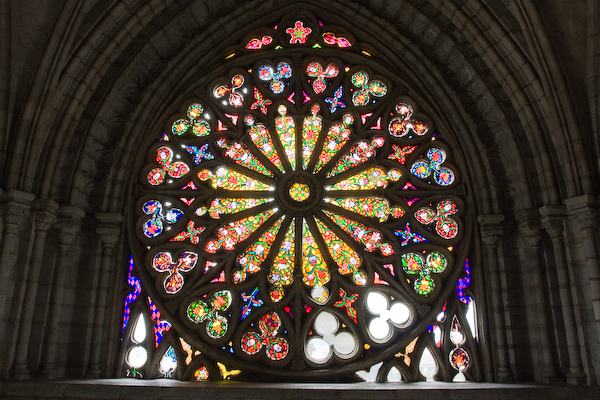 We kept moving up and found a gift shop and then cafe on different floors. The concrete stairs ended in an empty square room with peeling paint, glass windows on all sides and concrete columns supporting the floors above. To continue we had to change to a narrow metal spiral staircase that was found in one corner of the room. The next few levels contained the workings of a large clock and then some bells, the ropes for ringing the bells were tied together and obviously they were no longer used (though this didn’t stop some kids pulling the ropes for a few chimes later on). The spiral staircase ended and we now had to change to a metal ladder, the rungs just thin metal rounds welded to the two outside metal standards. Each room was now the inside of the tops of the spires, concrete crenulations making up the walls. These walls were mostly in a poor state of repair with bits broken off and pieces of metal sticking out where the concrete had fallen away, graffiti everywhere. 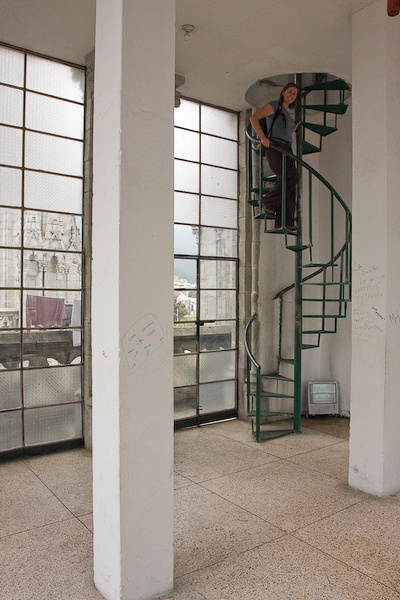 There were three floors reached by the metal ladders. The top floor, in the upper reaches of the spire, had only a metal mesh for flooring. An American couple were ahead of me and one of them nearly pushed a broken piece of concrete out of the little portal he was looking through; it would have fallen straight to the ground seventy meters below if he hadn’t of caught it just in time. I was first up and took photos, still doing so when the others arrived. We looked at what we could see of the view through the gaps in the concrete and then slowly made our way back downstairs. 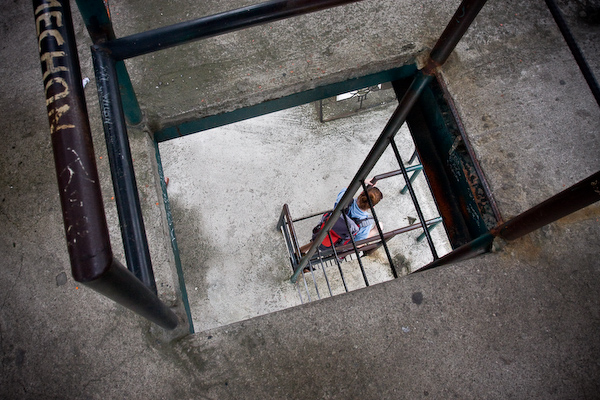 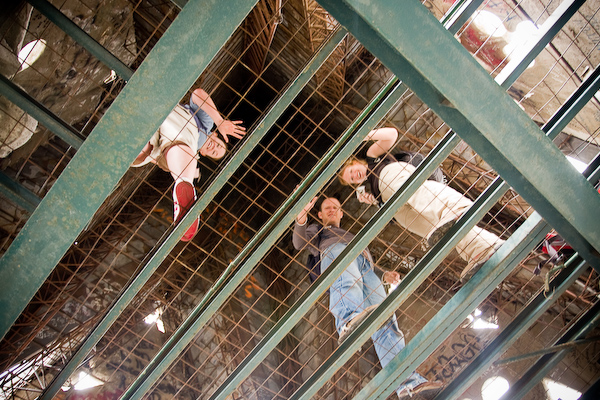 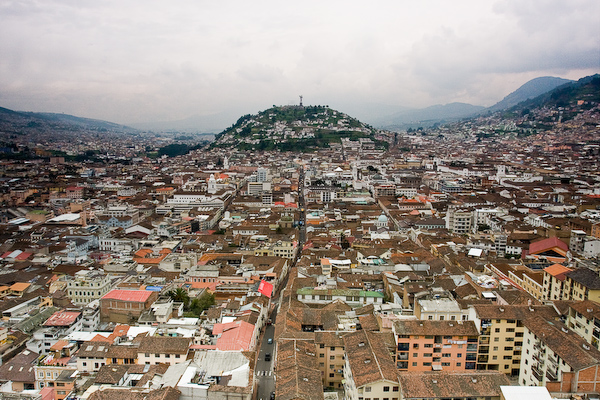 On the shop level the two spires were still joined by an intermediately room, a balcony giving a view outside and a covered walkway leading to a third spire above the center of the Basilica. The walkway was strange, a wooden passage over the large domes of the concrete ceiling of the church and above all of this an a-frame roof made of steel tiles. It looked like it was constructed more to allow repairs and reconstruction, the side benefit being tourists could now access the central spire. 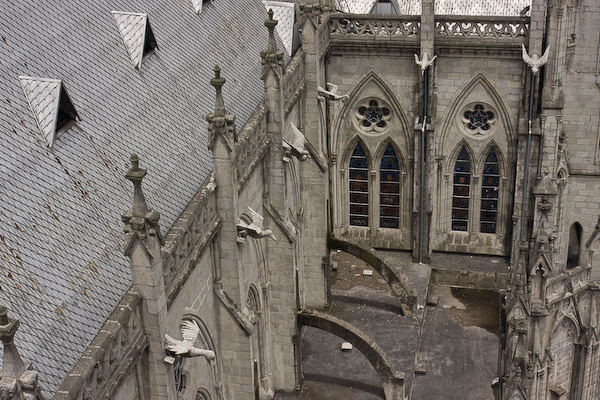 The Basilica gargoyles are Ecuadorian animals 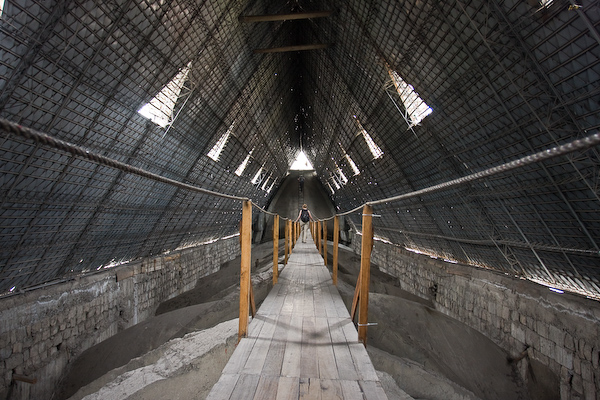 We made our way across the walkway and up the steep metal ladder at the end to find ourselves on a balcony circling the spire. On the far side of the spire was another set of ladders that led up to the top level of the spire. The ladders went from the balcony out over thin air to a buttress and then back from the buttress to the viewing platform above. This was one set of steps too much for me, I stayed on the balcony while the others slowly ascended. The views above were apparently good, at the end of the Basilica the Monumento a la Virgen de Quito, a large statue of an angel on a hilltop, could be seen framed between the two other spires. 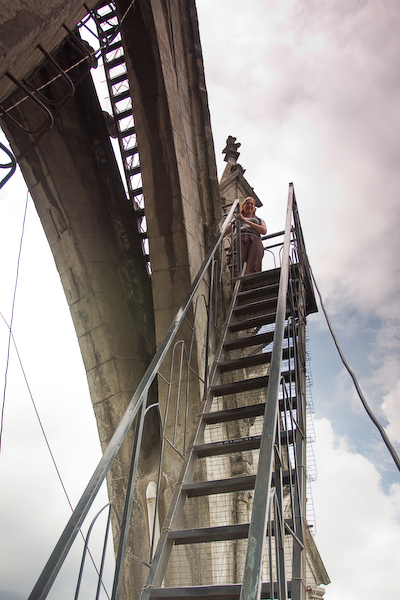 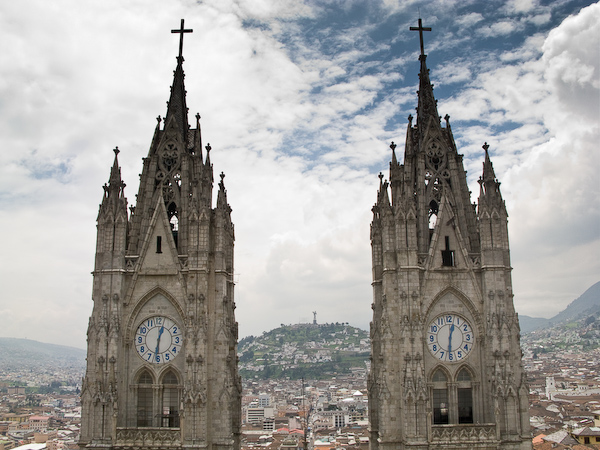 The view from the central spire

We met another person from our group as we were heading back towards the shop, I guess there aren’t that many sights to see in Quito when you only have a day so bumping into people we knew was inevitable. We were done at the Basilica so exited and started walking further into the old town of Quito.

Our walking bought us to the Plaza Grande o de la Independencia, the main square in the old town. There was some kind of protest underway, a group of people in from of what looked like the city hall. Various official looking people were coming out of the city hall past the two guards in ceremonial uniform standing to either side of the main entrance. On the street level there were police with riot shields. It looked like a peaceful protest, we didn’t see any commotion. We walked around the square taking in a war memorial at the center but then had to run for cover as the rain started coming down. We took shelter under the entrance to a church and the protesters disappeared. The rain didn’t look like it was stopping any time soon so we walked out and hurried around the corner to a different church, this one open so we could have a look around. 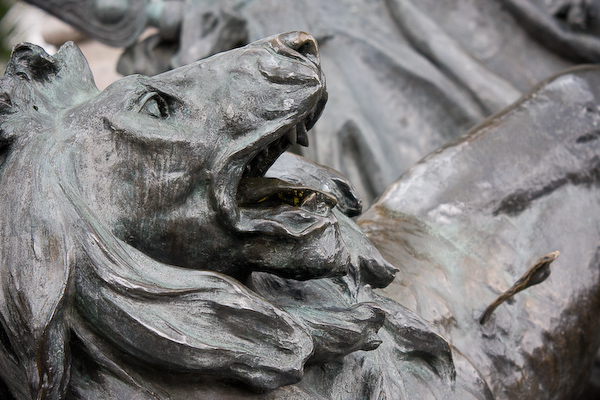 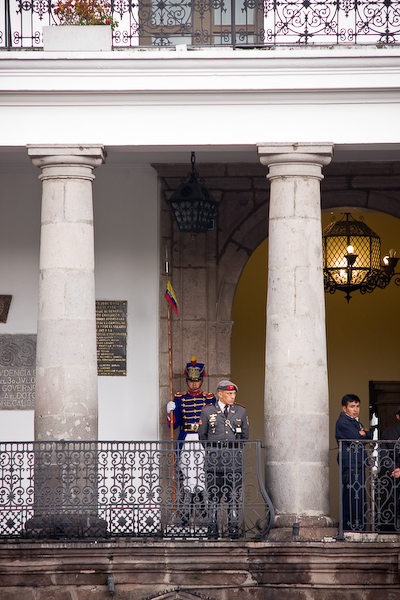 The church I wanted to see was a little bit further down the road but was closed, we could see inside from the road to the ornate golden decorations covering the walls but the gates were firmly shut. Keryn and I split off as we were leaving a small arcade, Keryn looking to buy some elastic and little domes to attach to the rain cover on her daypack. We met up with the others at the Plaza de San Francesco in a little cafe where we had lunch.

The others headed back to the hotel after lunch. Keryn and I walked a bit further, doing some more shopping and heading towards Calle La Rhonda, a nice looking little street we had seen on our tourist map. We found the street, actually coming out on a main road above it, and decided we’d had enough so found ourselves a taxi back to our hotel. 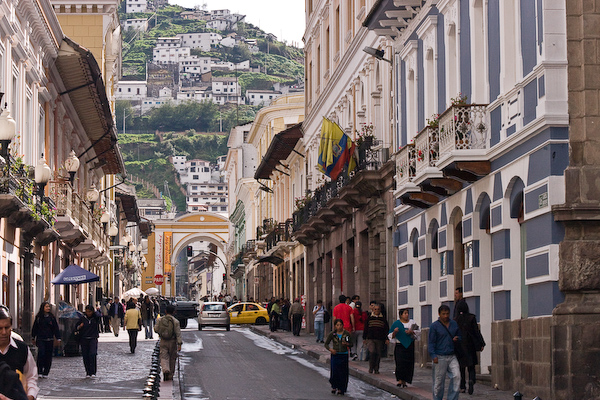 In the old town 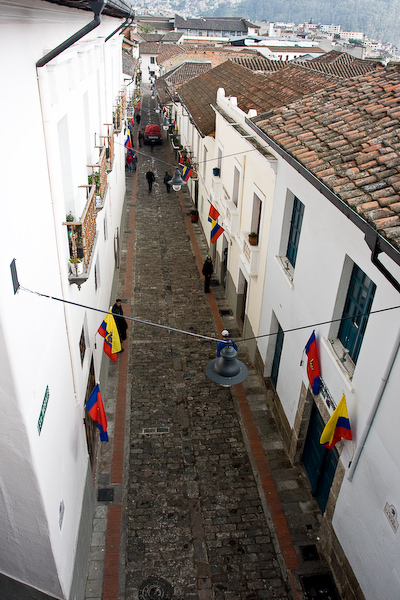 At the hotel there was a new guy behind the counter and he was having fun with us tourists, only giving out keys when we requested them in Spanish. He was good natured about it and everyone got to learn a few new words in the process. We relaxed for a while, going out only to buy some supplies such as water for storing on the truck. At 7:30pm we joined the rest of the group in reception and we all went out to an Argentinean Steak House for good cheap food. Getting back we tidied up our packs a little bit and then went to bed.