The early morning walk up to the Runkuracay pass (3850m) was steep and tiring. I stayed at the back and walked with Kelly for most of it, Kelly wasn’t feeling very good and was struggling a bit so needed encouragement and I was happy to take it slow and steady. Overnight it had snowed to a level a few hundred meters above where we had camped and in the morning light the views were again stunning so I was taking lots of photos. 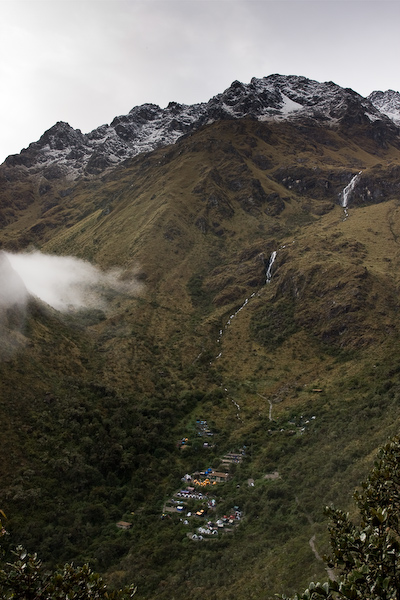 Our campsite dwarfed by the mountains 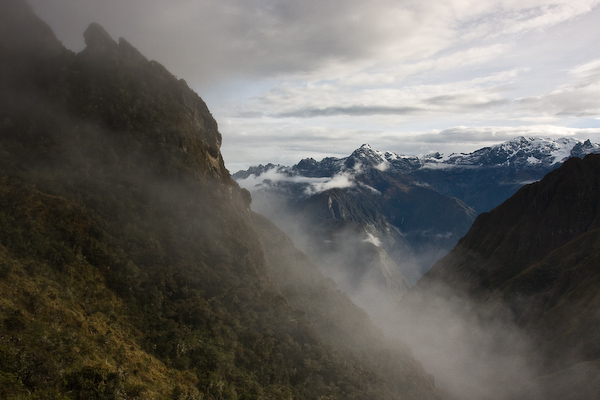 Mist in the valley leading to the distant peaks 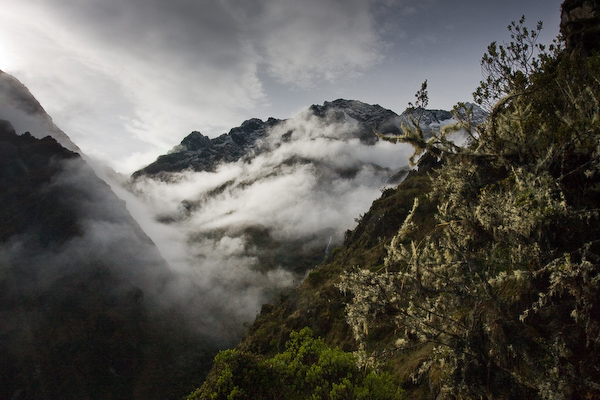 The sun begins to peak through

We stopped at the Runkuracay ruin half way up to the pass and had a good rest, moving on as more groups of walkers started arriving. Nearer the top there were a few moody tarns, black and looking cold. Thankfully the pass wasn’t as high as the previous day’s climb and once we were over things got easier. Well, for me they did, there were a lot of downward steps today and many found these tiring to navigate. 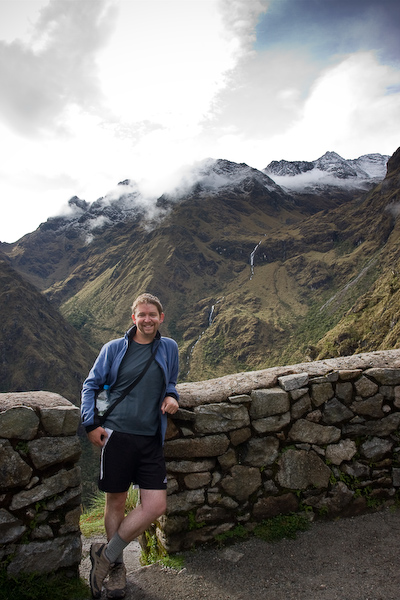 Resting at the Runkuracay ruin 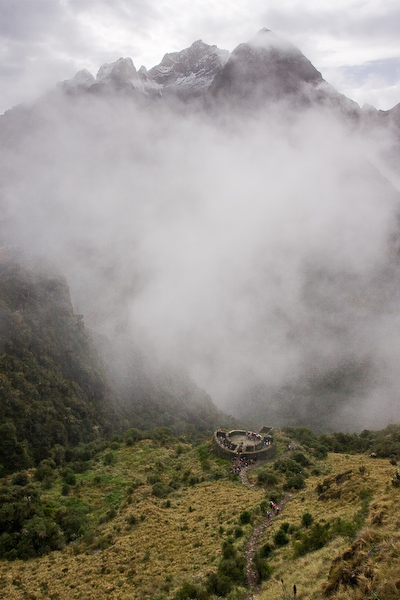 A beautiful place for a fort 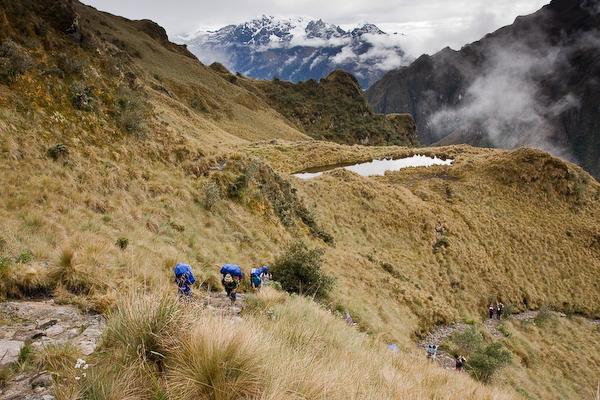 Near the top our chuskis pass one of the tarns

We visited another couple of ruins along the path; Sayacmarca and Phuyupatamarca. All the old Inca sites are interesting and most of the ones we saw were very impressive with their mountain settings, I’m amazed that more isn’t made of them when people talk about the Inca Trail. We had a snack shortly after leaving Sayacmarca and then followed the Inca flat path along a ridge top, passing through a tunnel carved out of the stone and eventually arriving at another pass. While waiting for others to catch up we watched two hawks flying around the hills before being swallowed up by a rolling mist that blanketed the view. Heading downhill we stopped again at the Phuyupatamarca ruin where we could see the back of the mountain where Machu Picchu lies, the end was nearly in site. 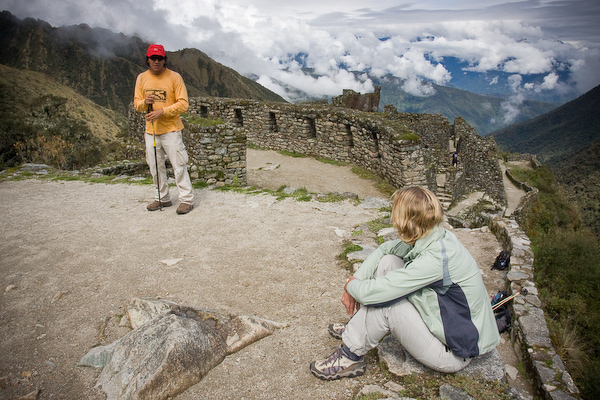 Listening to Saul at Sayacmarca 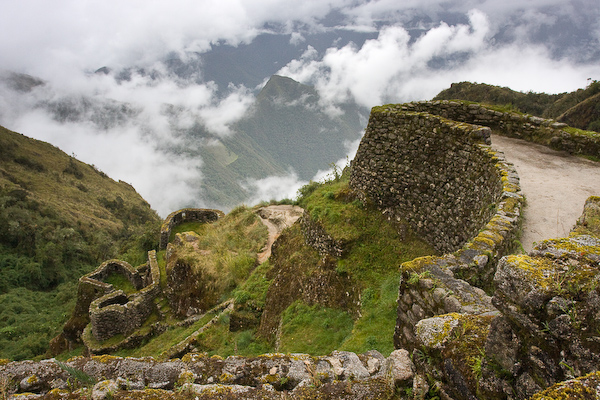 The view at Phuyupatamarca 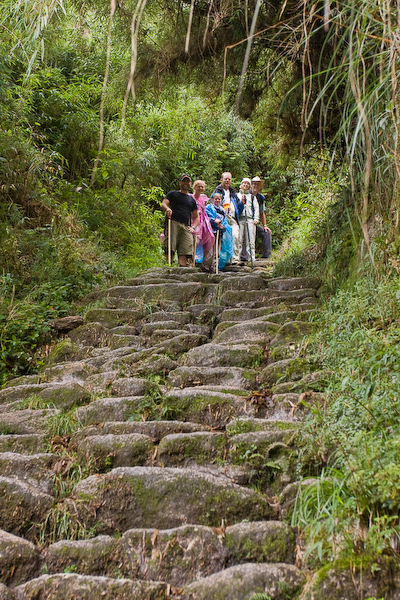 I think I mentioned lots of steps… 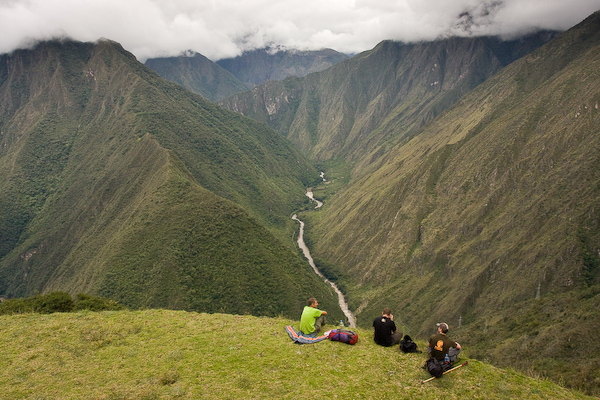 Sitting and admiring the view

The further we went down the warmer it got and we passed another ruin consisting of giant terraces climbing a hillside and walked a short way to the next campsite. There were shops here, a large dining room and best of all hot showers! We all had to queue up for a chance to get clean but it was more than worth a bit of a wait. After cleaning up and before it got dark Saul led us to a nearby ruin called Wiñay Wayna, the name means forever young. Wiñay Wayna was beautiful, like a small Machu Picchu nestled on a steeply sloped hill. Many people don’t visit Wiñay Wayna or even know it exists, if you’re doing the Inca Trail I recommend a visit. 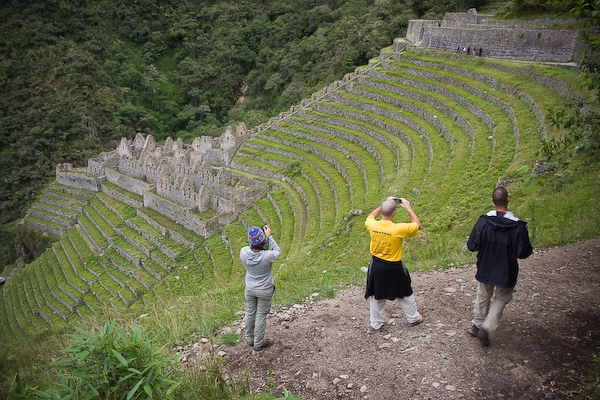 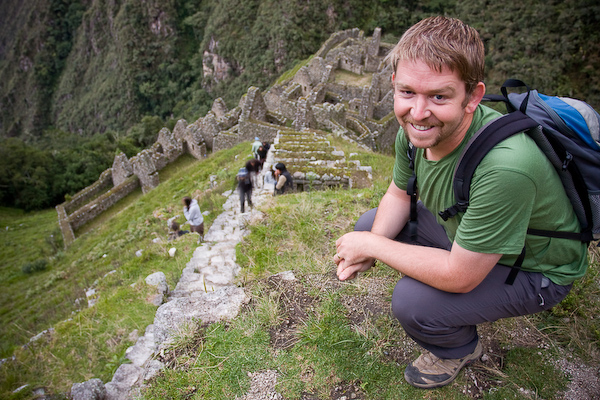 After dinner we had a get together where we thanked our chuskis for their hard work and gave over a tip. It was good to be able to express thanks to these men and we were all sad to see them go. We had another early start coming the next morning for our final dash to the Sun Gate and Machu Picchu so most didn’t stay up too late, though a few beers were consumed just because we could.