It was Danny’s birthday today but we didn’t celebrate much other than wishing him a happy day, the proper party would come later. He did get a few little gifts which was nice.

Things got harder today. I believe that is what is called understatement. From our campsite we would today be climbing up to Dead Woman’s Pass at 4200m and from there descending to our campsite. The whole trip would hopefully take around six hours.

The path moved up past the farmland we had camped on up through a forest and then out the other side to the low vegetation of the high pass. As on day one we had multiple stops and this time the group was more spread out, the slope and altitude taking their toll. It was very much a case of one step after the other with frequent little stops to catch breath and take in the next visible section of trail. We were very lucky with the weather, over the four days we had either sun or a cloudy sky with no rain while we were walking. We also were not walking in searing heat most of the time.

One step, another step, one more step, and stop. Have some water. Continue.

There were two main stopping points on the morning trail, both campsites. The second, called Llulluchapampa, was beautiful with views both up and down the valley and both llama and sheep grazing further up the valley. I was in the first few people to reach this point and wandered around taking in the view. Danny and I both bought a bottle of Gatorade to toast with when we reached the pass ahead. 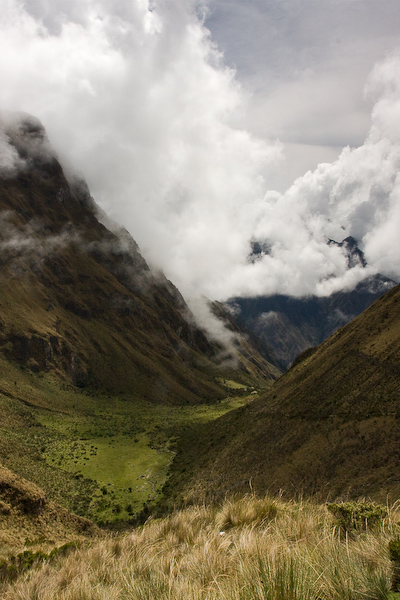 Looking back down the valley 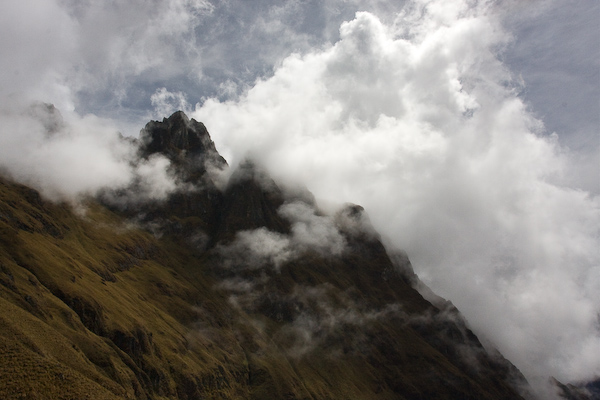 And also up to the peaks

The path from here was stony and with no more trees we could see most of the way to the top. We had set off quite early and had passed others still packing before starting their walk so were one of the first groups to head up to Dead Woman’s Pass. I walked most of the way with Vanessa and Janet with Albert way ahead proving that age has nothing to do with suitability for walking at altitude (though I think his long legs did help). Dean was not far behind Albert and Sean was nearby as well. 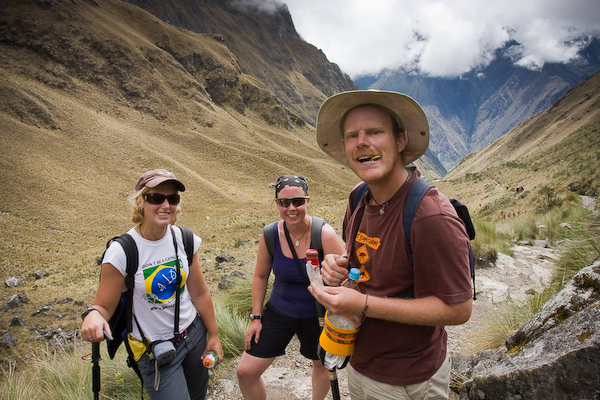 Taking a photo and a breather

Sucking in deep breaths we slowly ate up the meters, setting goals along the way; rest at the sign, the next corner, by that plant up there. Steady effort eventually bought us to the top and we had a well earned rest. Clouds and mist had been appearing and moving over the pass and surrounding mountains all morning and at the top we couldn’t see the valley on the other side, the view was white. The cloud cover and wind meant it was quite cold as we posed for a photo at the top and then we sat back and relaxed while we waited for the whole group to arrive. 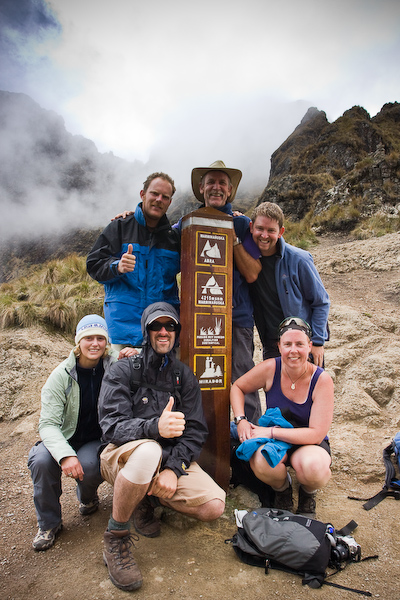 At the top of Dead Woman’s Pass

It was nearly an hour before we were all together once more (well, Dean and Albert had set off earlier as they were cold). The sun came out as we waited and I wandered around taking photos of people I recognised coming up the path and then climbing a bit higher to get photos of the clearing view. It had been quiet and peaceful when I had first arrived at the top but by the time the last person came in there were dozens of people, everyone calling out to those they knew and giving encouragement and congratulations. We had a group photo and then got ready to descend. 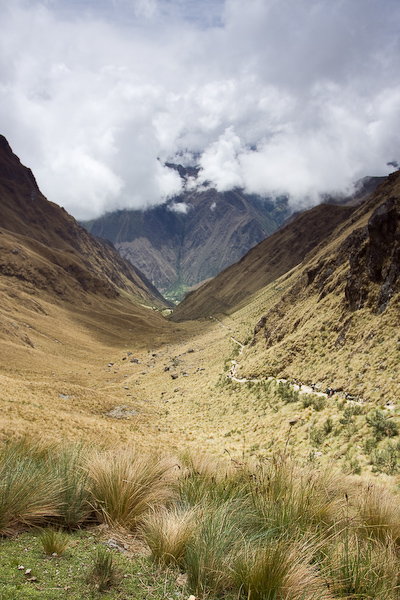 Looking back at the path travelled so far 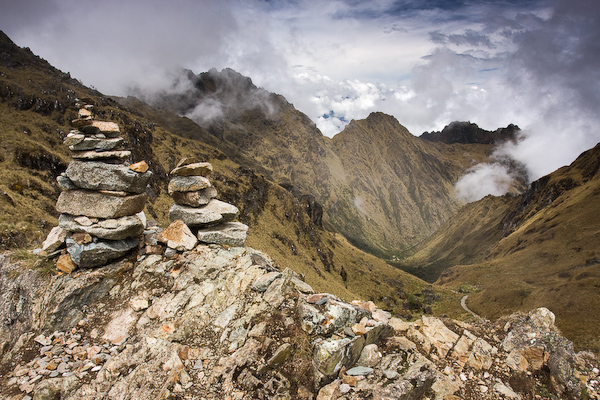 Looking towards the valley path ahead 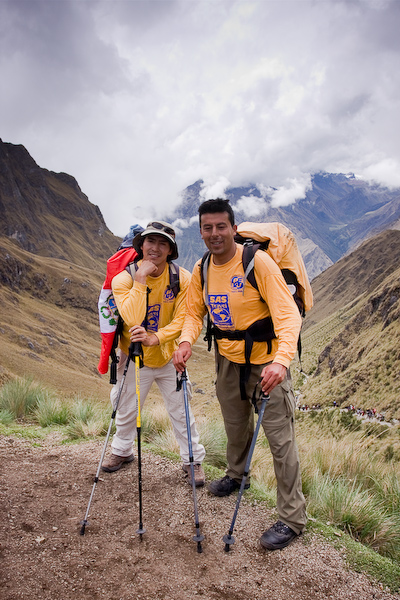 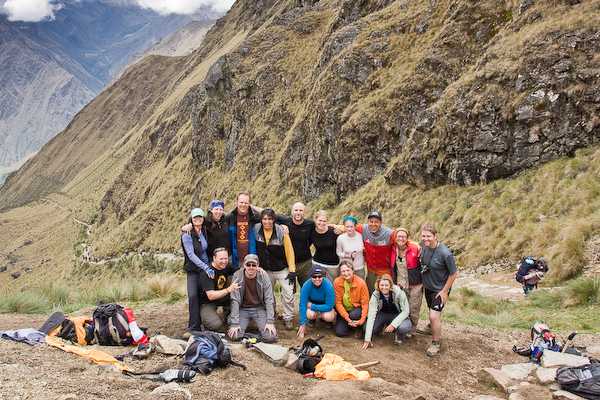 I walked with Danny and we were soon half running down the path of stone Inca steps. We had a good trip down and found ourselves in the campsite in under an hour. The campsite was next to a fast flowing stream in a valley with the path from Dead Woman’s Pass passing through and then up the other side of the valley into the mountains. Again the tents were all set up and everything was ready for us. It was still early afternoon when everyone was in camp and as such we spent a lot of time relaxing in between playing cards, sipping hot drinks, having snacks and otherwise waiting for dinner.

One game in particular kept us entertained for hours. Called Mafioso it involved us all sitting around the table in the dinner tent and picking cards. There were a set number of named cards which defined the characters of those taking part. One person would be the game master and called the shots. Two or three people would be Mafia, their task to try and eliminate people without being discovered. Another person would be the Police, trying to discover the Mafia and assist in their discovery. Everyone else would be innocent bystanders, trying to figure out who the Mafia people were.

Obviously someone had now been killed and this is the first clue towards discovering the Mafia. Everyone discusses who they suspect and a consensus is reached as to who should be accused of being in the Mafia. Here the Mafia are trying to persuade people they are not the guilty parties and are trying to get innocent people accused and therefore taken out of the game. The identity of the Mafia and Police stays secret until they are either found out or the Mafia win the game because there are more of them left than anyone else. The police person cannot flat out accuse someone they have discovered in a Mafia member, they simply have to try and persuade others with reasoning.

It makes more sense once you’re playing the game and was great fun, it definitely made the hours disappear. With another day of walking ahead it took no convincing for people to head to bed early. It rained overnight and a few people had come down with a bug during the day so some had an uncomfortable nights rest.