There was only to be one night in Puebla so Juan-Pablo had suggested that we leave early to ensure a full days visit. This meant leaving the hotel at 5am so the early morning found the group piling into three taxis for the short trip to the bus station. We weren’t expecting much from the transport on this tour so the reasonably spacious air-conditioned ADO bus was a nice surprise. The bus journey, no doubt helped by the early start and lack of traffic, was less than two hours and we were driven through a nice sunrise and interesting scenery. Rising to our left and right were the second and third largest volcanoes in Mexico, the sun rising over Ixaccá­huatl and illuminating Popocatápetl on the western horizon. 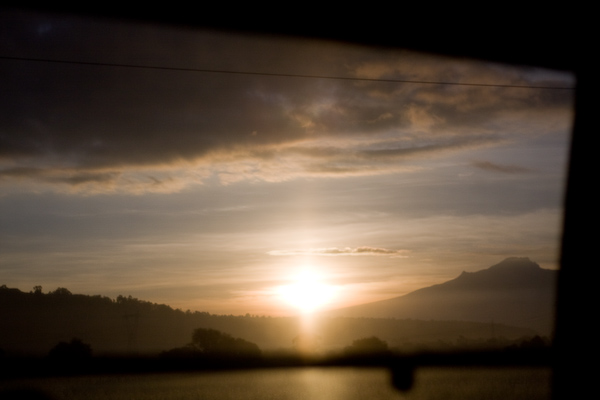 The morning sunrise from the bus

We arrived to a tidy bus station on the outskirts of Puebla in crisp blue skies and lined up for taxis to take us to our Hotel. The taxi ride through the run down streets of the suburbs was a little cramped, Keryn and I sharing with Pat and Miriam (the older Irish couple), but at least it was another short journey before arriving at the Hotel Teresita.

We were lucky to find our rooms available and dropped off our bags before regrouping to find breakfast. A few doors down from the Hotel there was a nice little restaurant and we all enjoyed good food and friendly, if a little slow, service. The options for the day were explained in a brief meeting and we were then left to do what we wished for the day. 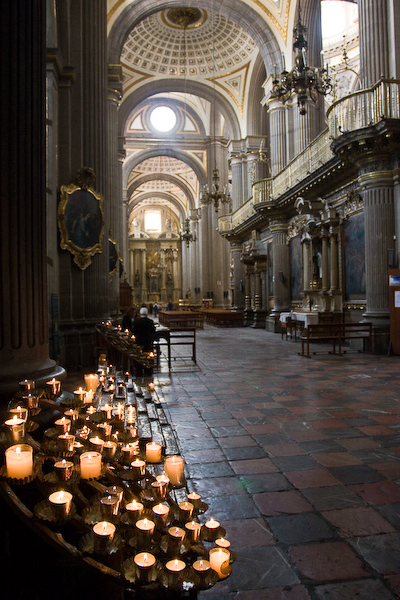 Inside the Puebla Cathedral

Keryn and I walked with Ben and Lisa to a bank where we changed down some of the large denomination pesos we had in our possession. Heading further down the road we came to the Zócalo, the lovely square at the center of the city. Adjacent was the city Cathedral and we said adios to Ben and Lisa to have a look inside. It was peaceful and there were not many people inside as we wandered around, looking at the grand architecture and holy relics. Looking at our map and reading the guide book we decided to head for the local information centre. Along the way we took a diversion into the Courts of Justice, a colonial building simply restored and a nice place to visit briefly. The Information Centre was a bit of a letdown; mainly it seemed to be for booking tours with a few pamphlets around for hotels. We were given a slightly better town map so this in hand we headed out. 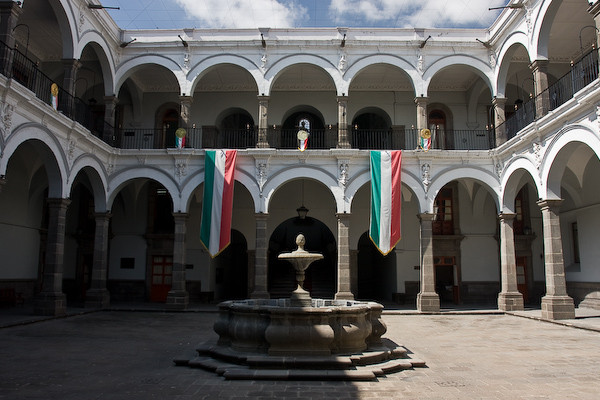 The courtyard of the Halls of Justice

I had read that one of the museums was free on a Monday so we took the short walk to the Museo Amparo. Heading inside we handed our bags to the friendly guards (who got their meaning across very effectively while not speaking a word of English), paid a small fee for the use of a camera and then we entered the museum. It was a nice little place with similar displays to the Anthropological Museum in Mexico City but on a smaller scale. The three different areas were separated by peaceful courtyards that had interesting pieces of modern art and sculpture on display. The displays had one advantage for us over the larger Museum we had visited earlier – English descriptions. There was a focus on the method behind the creation of the art and sculpture which made each room interesting. It didn’t take too long to go through all the areas, the last a few rooms dressed as in Colonial times. Back on the streets we headed for another interesting sounding Church. 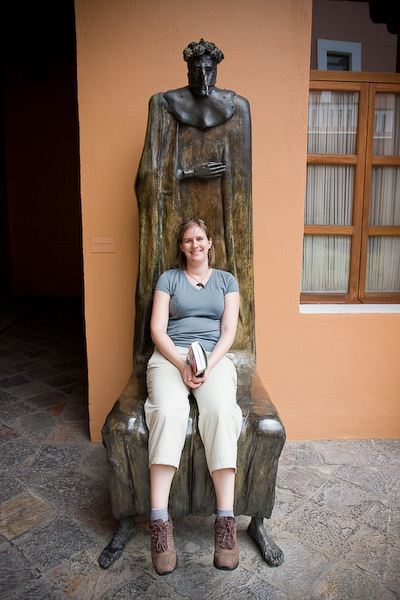 Keryn interacting with sculpture at the Museo Amparo 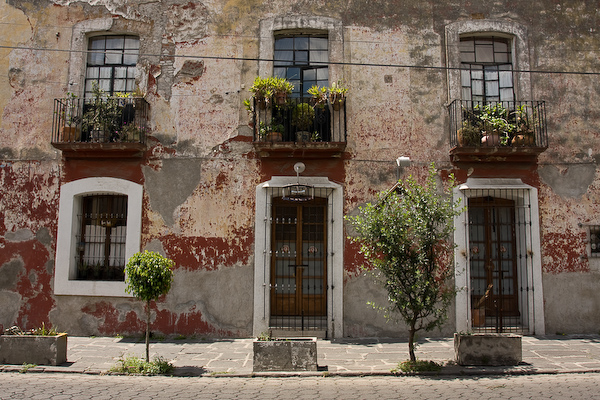 On the streets of Puebla

A building off the ZÃ³calo

Unfortunately the Church of Santo Domingo was closed for the lunch period so we wandered for another hour or so before heading back to the Hotel. We had a rest for a while and then headed into the Hotel reception to do some typing/writing as our room was windowless and a bit stuffy. In reception we meet Mark, the sole single guy in the group (another Australian) and he mentioned that he was heading out to the nearby town of Cholula with the German (Nina and Jessica) and Irish (Jenny and Claire) girls, so we decided to tag along as well.

To get to Cholula we needed to catch a local bus, Juan-Pablo having given us directions to the required station in the morning meeting. We walked the blocks and found the place just as a bus was about to head out to Cholula so we all got on board; Nina doing the talking to make sure it was the right bus and getting the fare, a measly six pesos each. Keryn got a seat but the rest of us had to stand for the 15km journey out of Puebla.

It wasn’t a new bus by any means but was sturdy; just as well given the way the bus driver threw the vehicle around corners. Once out of the city we raced along the main road making good time and we were soon discussing where to get off – the decision made as we caught sight of the Church of Nuestra Senora de los Remedios atop the hill that is the overgrown remains of the Pirámide Tepanapa, the Great Pyramid of Cholula. 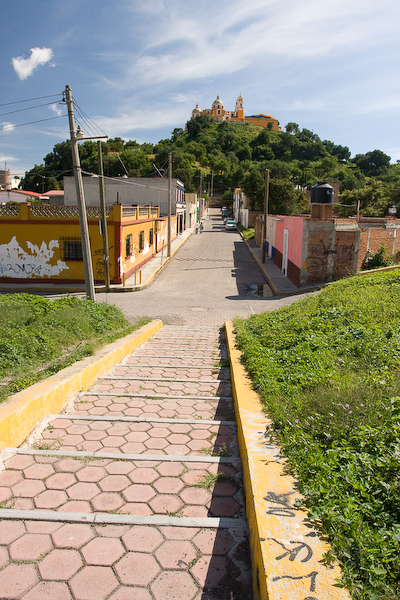 Mark grabbed an ice-cream and we walked along a dirt road heading towards the Church, stopping a few times to choose between different paths. At the foot of the hill we chose a direction and were soon following a paved path around and then up the hill, eventually arriving at the top and entering the grounds of the Church. We took in the view, looking out to Popocatepetl and over Puebla in the distance. There was some kind of ceremony/celebration taking place at the church and there was a brass band playing dramatic pieces of music underneath a large tarpaulin, next to a stage that had what looked like an altar and a number of religious statues in place. 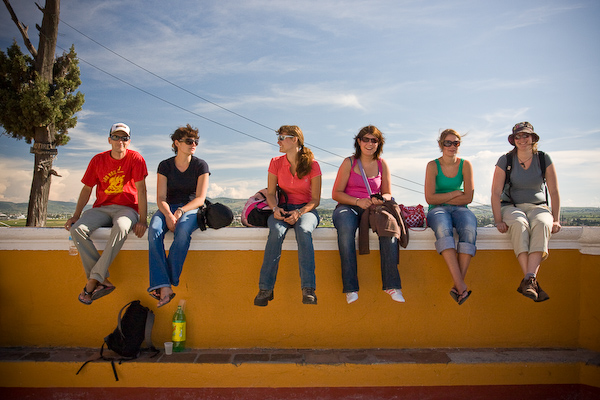 Atop the walls of the Church of Nuestra Senora de los Remedios: Mark, Nina, Jessica, Claire, Jenny and Keryn

Walking back to the base of the hill we had a relaxing sit-down over a beer next to what seemed to be the site of a fun fair, though there weren’t many people in attendance given the noise that was being made. We were waiting for the sun to get lower, our intention to watch the sunset from up at the Church. 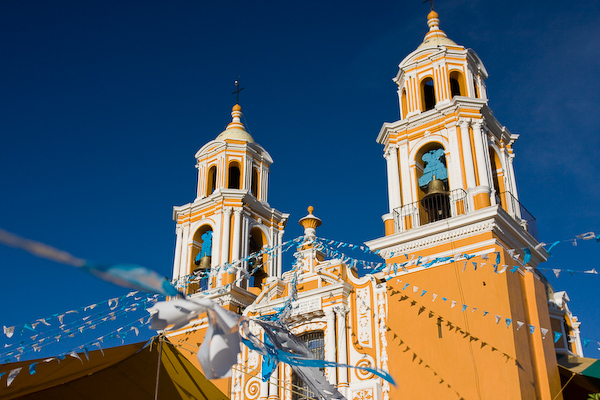 Back up at the top we all sat on the wall facing Popocatápetl and the slowly setting sun. About five minutes before the sun was going to dive behind the mountain we were kicked off the wall by an indignant local, sitting where we were was bad apparently. The sunset wasn’t much to talk about, no glow in the sky, just yellow in the clouds around the mountain and a muddy red orange on the opposite horizon clouds. We stayed for a while longer then headed back to the town to find the bus back to the Hotel. Thankfully we had Nina with us to ask the local police and others where to go and after a five minute walk we were soon on a bus back to Puebla. We even all got seats this time after standing for only a few minutes. 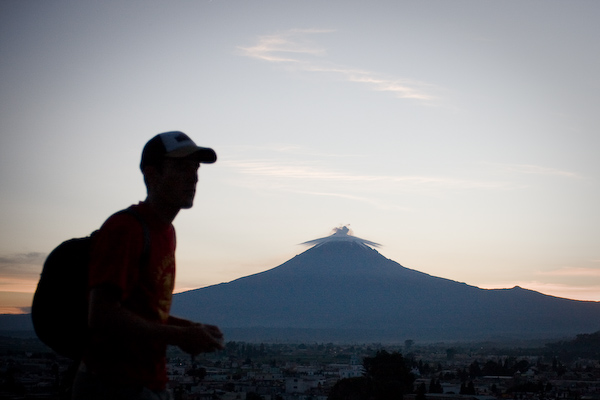 Heading down after sunset

We had all missed the evening meeting and arrived back at the Hotel around 9pm. Paul was in the lobby having returned from dinner at a restaurant at the Zócalo. He waited while we dropped off our bags and then went to the Zócalo to find ourselves some dinner and drink. We ate at a fancy restaurant; I had the Pueblo Mole, enchiladas in a dark chocolate and spice sauce. It was nice, not sweet, but the richness was a bit much in the end and I couldn’t finish it. We had a minor issue with change not appearing but had that soon sorted and then we retired back to the hotel for sleep after a long day.