We left Puebla today for Oaxaca, thankfully by the 10:45am bus so we had a bit of a sleep-in. Again it was an air-conditioned bus but the journey was longer, nearly five hours. I was able to type up the days so far, a novelty compared to past trips on more cramped or bumpier means of travel. The dubbed movies and my iPod provided entertainment when I wasn’t typing. The landscape was mountainous with sparse vegetation and the further we travelled the more cactus we saw, the view in the distance of green and brown hills with spikes of cactus punctuating the landscape. A smooth journey it felt over quickly and we found ourselves unloading at the Oaxaca bus terminal. Juan-Pablo organised taxis and we headed into the city for our accommodation at the Hotel Niut-Ja.

We went out into the city in a group heading for a restaurant for a late lunch. It was a nice restaurant with good cheap food, not a tourist haunt. During our walking we saw a small truck with a cage on the back parked at the corner of the Zócalo. In the cage were two black panthers (black jaguars in truth). We’re not sure why they were there but it may be because there is a circus in town. It was a all a bit sad to see these majestic animals in such a tiny enclosure. Afterwards we wandered around first to find a chocolate factory (very tasty) and then to find the parts for some tequila consumption back at the Hotel. 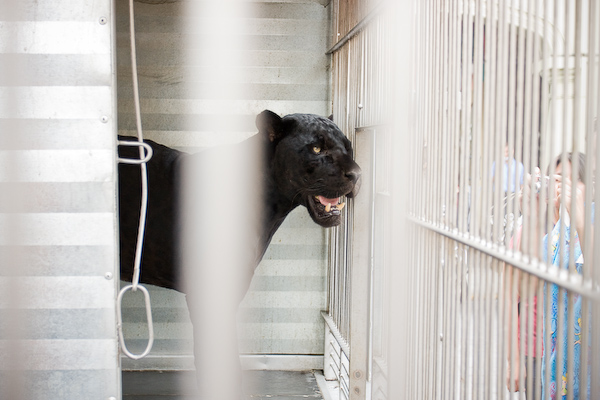 One of the captive black panthers 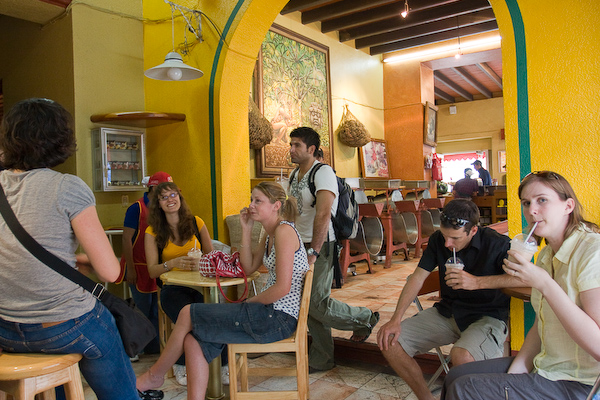 Tomorrow we’re mostly all going on a tour of regional highlights (a tour that will hopefully be better than the last, mainly because it’ll be exclusive and we know what’s happening this time). We also got our washing dropped off at a laundry for picking up tomorrow evening, no end to the excitement here!

In the evening there was a mini party in the hotel reception, a few people drinking the tequila purchased earlier in the day. Keryn and I were convinced to come along to a bar so we joined the group walking up the street from the hotel. On the way a practising band was spotted down an alleyway leading to a covered car park and when they saw us looking we were waved in to join them. They organised themselves, about a dozen guys playing guitars, tambourines and other instruments and they started up a song for us. A couple of the guys picked woman out of our group for a dance, Keryn having a few twirls on the car park dance floor. It was full of energy and very good; we only stayed for the one song but gave loud applause as we left. We only stayed for one at the bar, some others in the group stayed a considerable time longer.

Our room was about halfway down the hotel building on the first floor but we could here every noise in the Hotel lobby and hallways. As the guys returned in the early morning we could clearly here their loud talking, we didn’t sleep very well that night. Mark came back very drunk and spent a lot of time confused and struggling to find his room. In the end Debbie and Paul got up to find him slumped on the floor, blood all over his arm and barely coherent. They helped him too his room and checked on him throughout the next day (he barely moved and didn’t get up till the evening). We were all a little worried for him but he was out drinking again the next night so he must have been fine.