For once I managed to actually get up for a sunrise. Unfortunately due to the location there wasn’t actually a sunrise to see. Huanchaco sits very near the point where the Humboldt Current rises from the Antarctic and the California current coming from the north meet. The confluence of currents causes an almost every day fog throughout the majority of the year and this is what greeted me this morning.

I walked in the white and grey conditions along the coastline heading towards the main beach. I hoped to see the local fisherman heading out to sea for the morning catch. Huanchaco fisherman are known for their fishing craft, a canoe made out of reeds much the same as they have been for hundreds of years. These reed boats are called Caballitos de Totora after the Totora reeds used in their construction. 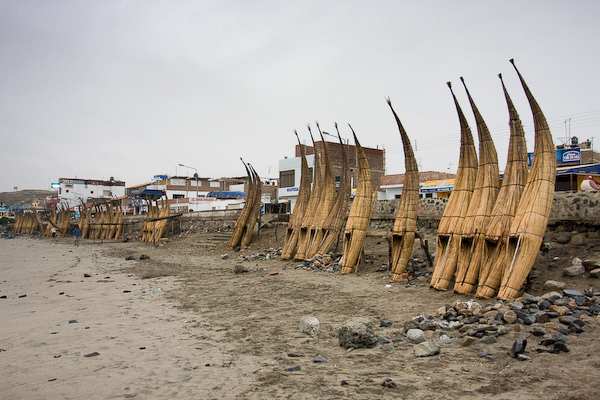 Caballitos de Totora lined up on the beach

I reached to beach, just past the towns pier, to find all the boats lined up along the shoreline above the high tide mark. Each vessel was leaning against a sea wall, point to the sky. There were a few men around undertaking maintenance such as cleaning the reeds or untangling nets but there was no sign of any movement towards the sea. I sat on some steps leading down to the beach and waited to see if anyone would go out.

One man saw me and came over to have a talk. As I knew little Spanish (you’d think I’d have picked up more by now) and he knew no English we struggled to have a meaningful conversation but we persisted and I learnt (I think) that the fisherman were waiting for the right weather conditions before heading out. David showed me his three boats and also the nets used to catch and hold crabs. I took some photos of the boats and David and he also took a shot of me standing amongst the standing vessels. We chatted for half an hour or so before I decided to head back to the Hotel. David was very friendly and more than happy to struggle along communicating to me about his work, it was the nicest conversation I’ve had in a long time and I wish I knew more Spanish so I could let him know how grateful I was for his spending time with me. 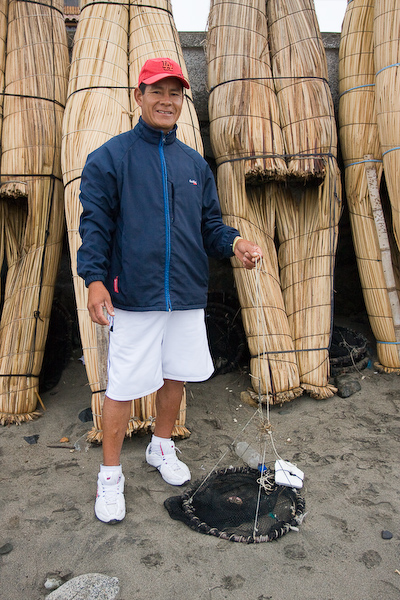 David demonstrates the use of the crab net 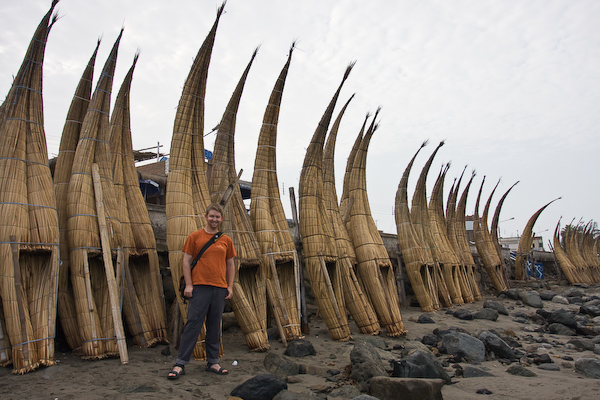 David’s photo of Brendon with the Caballitos de Totora

Walking back along the beach I did get to see a couple of fisherman out fishing off the shore near the hotel. The two men were in their boats casting out nets in the calm spot between where the waves were crashing down and the shore. It was still quite misty and the light was flat and grey meaning there wasn’t much variety in the photos being taken so I left and walked back to the hotel. 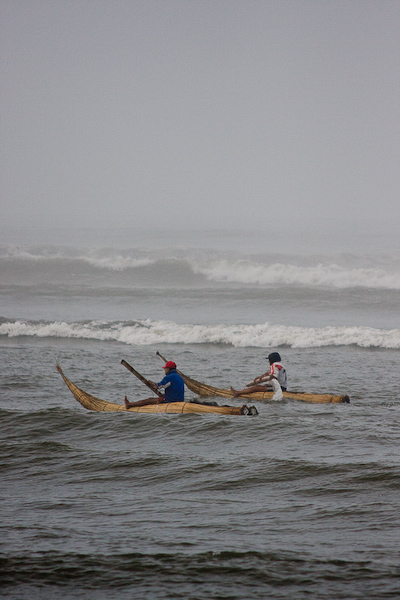 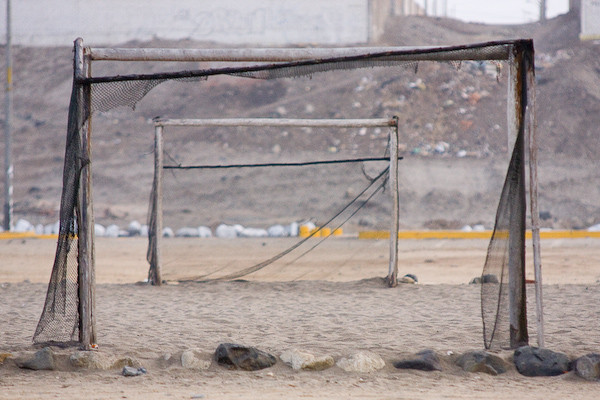 A football pitch on the beach

Tranquilo was parked outside the hotel and I came back to find a hive of activity. It had been such a long driving day the previous day that Melissa and Shaun had decided that a reward was due to Rhys. As such they had thought that cleaning the truck would be a nice surprise and there were half a dozen people crawling over Tranquilo scrubbing, washing and rinsing off the dirt and grime. I helped out for a while and then headed back to the room to see if Keryn was up yet.

Rhys saw the newly cleaned Tranquilo at breakfast and apparently was suitably impressed. The good work was undone as we drove out for the days activity, first visiting the ancient mud construction that is the city of Chan Chan. It was only a short drive and we were soon disembarking near a tall wall of dried red mud. The city of Chan Chan was constructed 1200 odd years ago and work is underway restoring many of the walls ravaged by the elements over the many years. With our guide leading us we wandered the one walled area currently open to the public, the Tschudi Complex. There are eleven separate walled areas, most of which are still being excavated. A second area will open to the public in 2009. 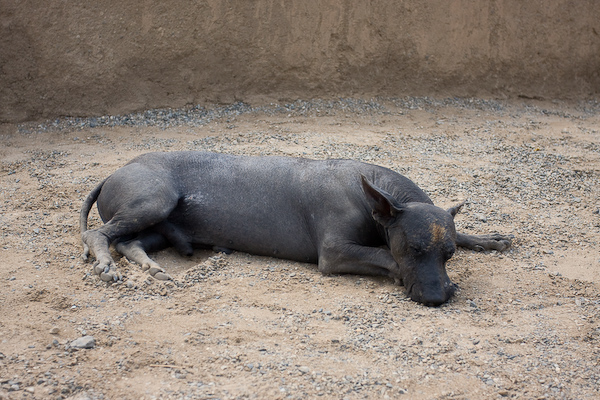 One of the local, mostly hairless dogs at Chan Chan 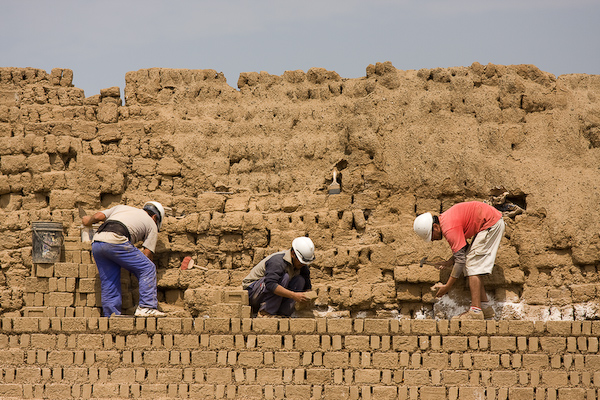 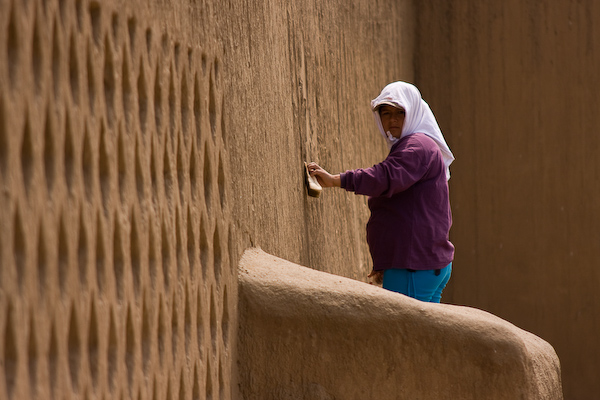 Looking after the restored city walls

We saw lots of restored walls and details. The people who built the city were very good at carving and the walls were covered in geometric designs and carved with symbols representing many different aspects of life and beliefs at the time. For a city of mud it was strange to come to an area containing a large lagoon full of water, reeds and birdlife. Animal representations were some of the more interesting carved reliefs including such creatures as fish, pelicans and foxes. It was a pity there wasn’t a raised platform giving a view over the site as we couldn’t get a decent sense of the scale of the place. 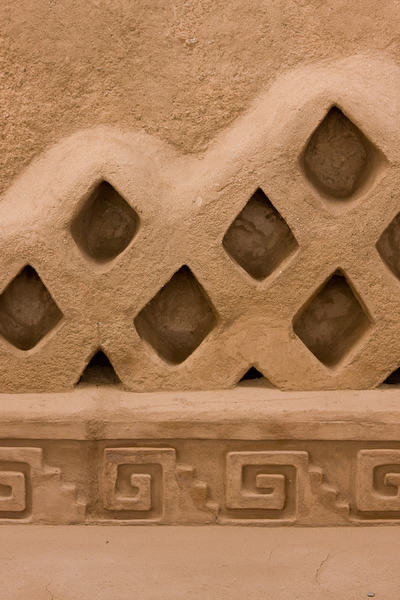 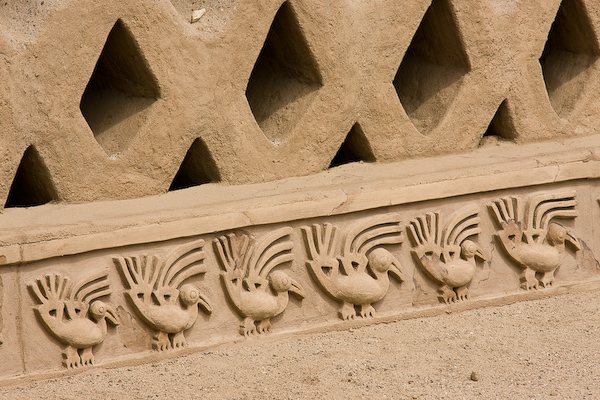 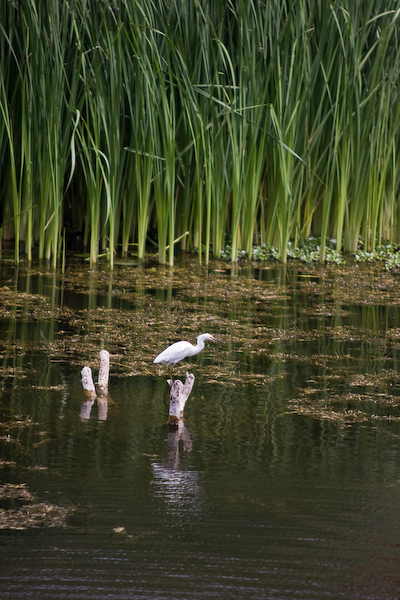 An egret in the Chan Chan lagoon 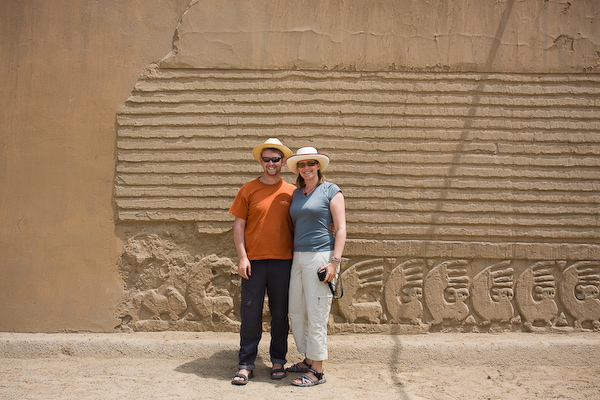 Posing in one of the city squares

Moving on we drove for a half hour or so to reach the Huaca de la Luna (Temple of the Moon) and the Huaca del Sol (Temple of the Sun). The Sun temple is a badly eroded hill which we were not able to visit. We did enter the excavations of the Moon Temple and very impressive they were too. The Moon Temple is actually at least six temples, each built one on top of the other and in doing so expanding the size of the structure. Each temple was carved with extensive and detailed carvings and because of the location and burial of subsequent temples much of the original colour is preserved. Extensive work is underway to excavate and restore the site, you can read more about that work on the site website http://www.huacadelaluna.org.pe/en/huacadelaluna.asp. 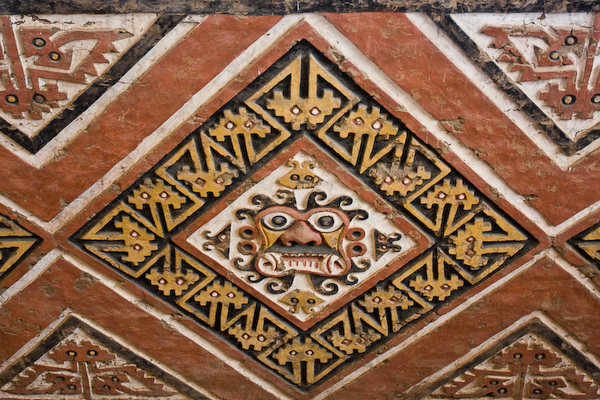 A section of carved wall in the Huaca de la Luna 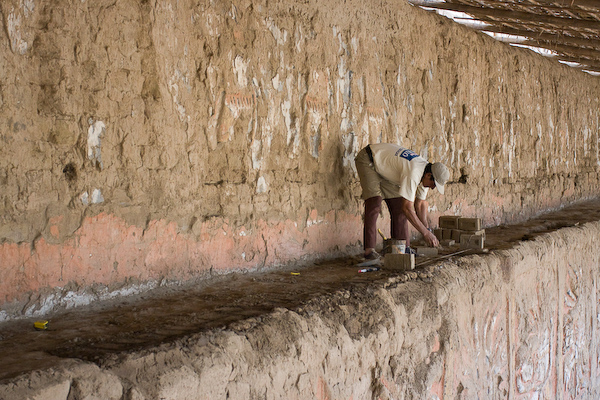 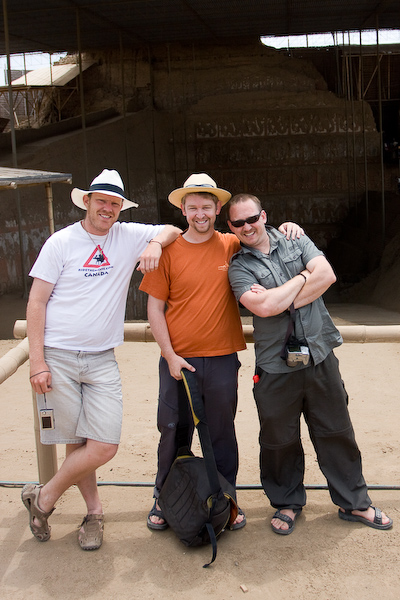 We were guided for an hour or so and shown different carvings and other excavations. The pieces we saw tended to be large, six feet high or more, and highly detailed. It would be wonderful to come back in twenty years when more of the structures are restored to get a real glimpse into a past culture. The temples were constructed in the time of the Mochica in the period 100 to 900 AD. After the tour we did a little shopping and then were all transported back to the hotel in Tranquilo.

The afternoon was free time. Keryn and I volunteered with Michelle and Albert to do some food shopping for the next days lunch. We walked through the town and saw a few sites before finding a local market to buy some vegetables. We sat for a while on the beach front and watched the busy shore front. There were lots of people out surfing, most having lessons. On the beach various people both local and tourist were relaxing and in amongst all this some of the fisherman were preparing their Caballitos de Totora and nets before heading out to sea. I took photos of all of this while the girls chatted, sitting on the wall overlooking the shore. 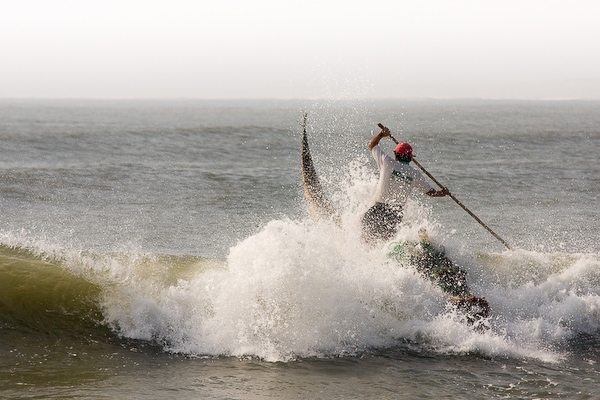 Heading out for a spot of fishing 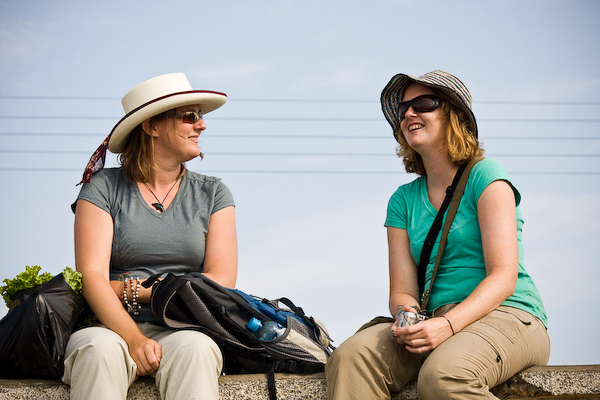 Keryn and Michelle chatting in the sun 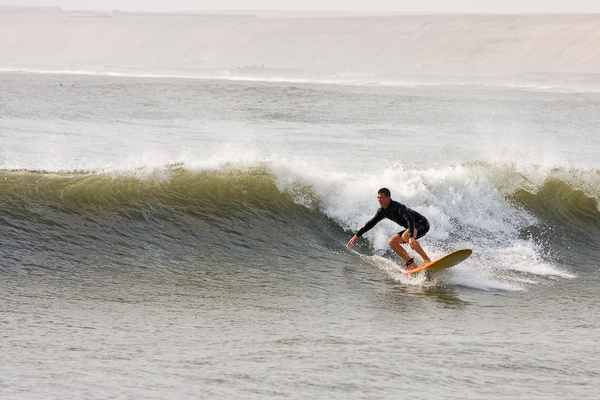 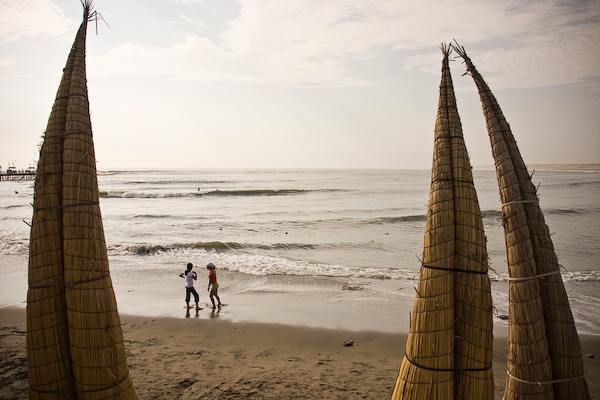 Late evening on the Huanchaco beach

The walk back to the hotel was interrupted with the search for bread rolls. Finding these we took some time to relax before heading out in the late afternoon to catch the sunset and hopefully the fisherman coming back to shore. We didn’t see any fisherman but did see a nice sunset, surfers in silhouette on a burnt orange ocean. We visited the pier, paying our fifty cent entry and wandering along to see people fishing and watching people swimming and surfing back towards shore. 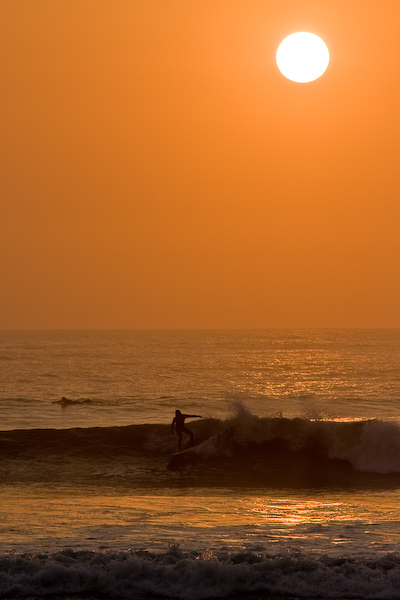 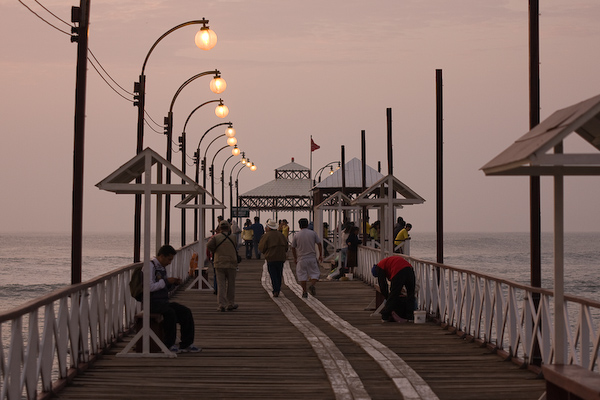 Evening on the pier 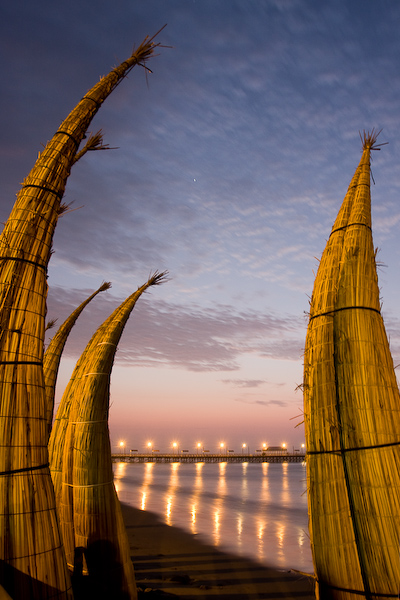 It was full moon and we briefly entertained the idea of eating in town, some of the restaurants were just starting up BBQ grills and it promised to be a tasty meal. We instead decided to make do with the tried and trusted food at the hotel and left as the full moon was rising in the sky. A busy day in the sun had taken its toll and most people were off to bed early.