The day was free of organised activities and most people took the opportunity to wander around the city. Keryn and I wanted to catch the changing of the guards at the Presidential Palace at 11:45am and joined others in heading towards the San Francisco Church, specifically to check out the catacombs. We had to pass through the Plaza Major, next to the Presidential Palace, and we took the opportunity to have photos taken with some of the riot police that were there. The front of the palace was cordoned off by the police, obviously something APEC related was happening that morning. 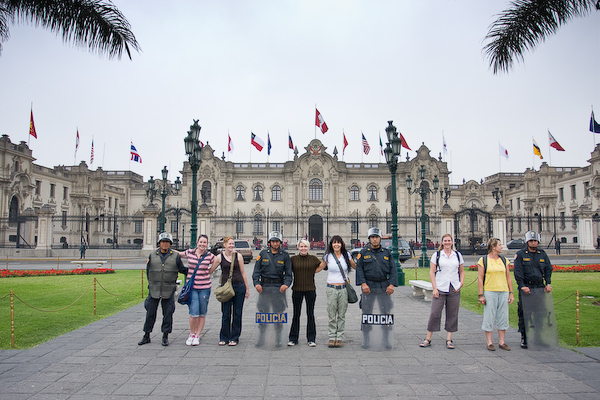 We got to the Church and followed the signs to the Catacombs tour where we bought our tickets and then sat down to wait for a guide. We weren’t meant to take photos on the tour but a couple of us sneaked in a few. The crypts of the church contain the bones of over seventy thousand people, no one is sure of the exact number. We were led through low a maze of passages, low ceilings and old brick walls. Bones were arranged in what I would describe as large troughs, normally each one holding one kind of bone such as skulls or thigh bones. There was one round chamber sunk into the floor and in the bottom skulls and bones had been arranged in a circular pattern, creepy but strangely attractive to the eye. 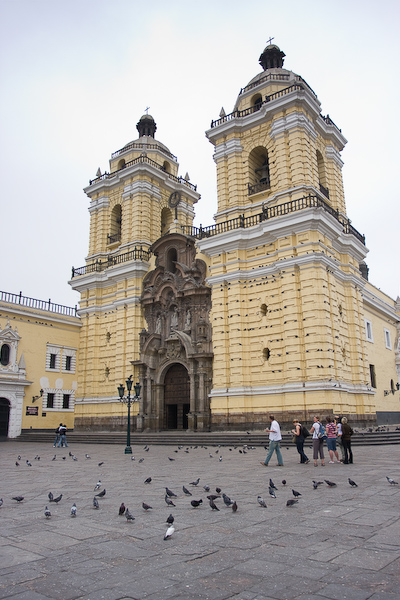 Heading for the catacombs tour at the San Francisco Church 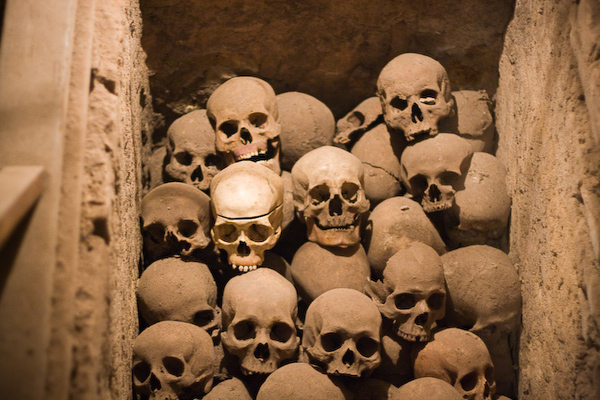 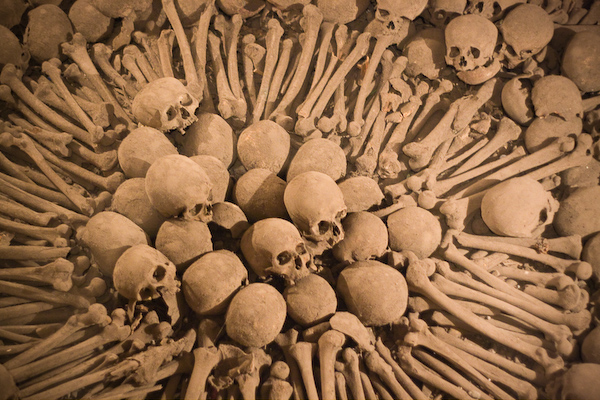 Making use of the bones 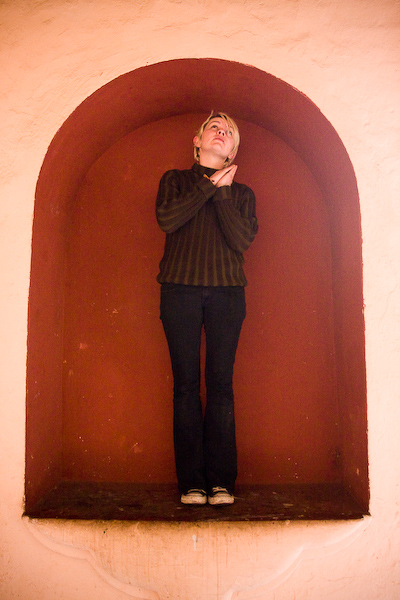 Back above ground the girls and Sean did some shopping and I went to the plaza to get ready for the changing of the guard. The area in front of the palace was now no longer cordoned off, though the police still didn’t let anyone approach the gates. I was early and talked for a bit with Angie and Janet who were looking at some of the architecture around the plaza. Sean arrived and we set off to find something to eat, eventually settling for a cake shop where we got a few things to sate our hunger.

Back at the Plaza we arrived to find the changing of the guards underway. The ceremony seemed rather pointless, lots of pomp and music but not a lot of anything actually happening. The music seemed to steal from various movie soundtracks, I heard parts of Braveheart and Gladiator pieces. Lots of smartly dressed guards marched around, swords were raised, flags unfurled, but there was no actual changing of any guards until after the ceremony had finished. It was all rather strange and a letdown. 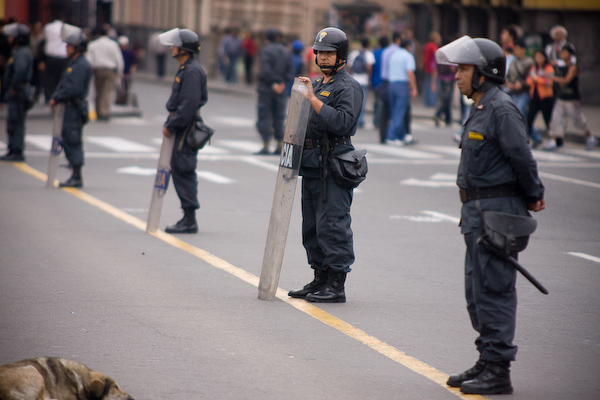 Police at the changing of the guards 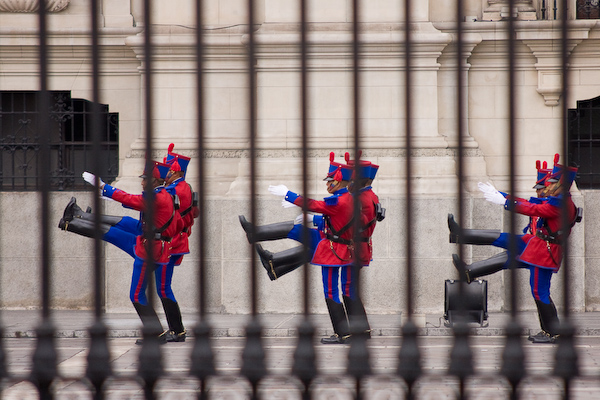 Marching viewed from over the road and through the gates 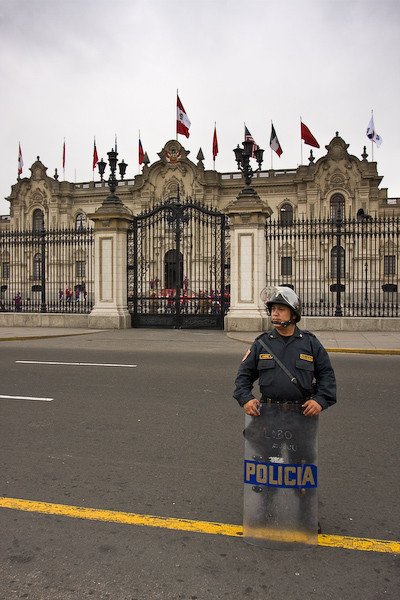 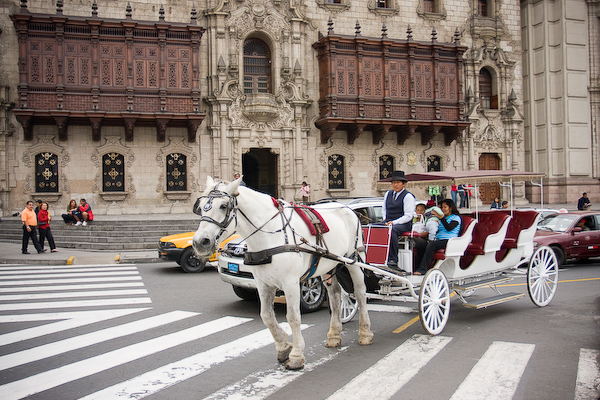 A horse ride around the plaza

Keryn and I rested and wrote for the afternoon. Being the final day of the tour we were saying goodbye to a few people and welcoming some new passengers. Kerry was meant to be finishing but decided to stay and with Keryn’s help was able to sort out alternative flights. Sophie and Michelle were finishing the tour in Lima and we were all going out for dinner and then on for a few farewell drinks.

At the pre departure meeting for the new guys not everyone had yet arrived so we were joined by only a few of the new people. We had a good dinner, Kerry regaling us with the inherent dangers found in the common fork, and then we were off to a bar with a couple of guys some of the girls had met earlier. The bar we found was pretty much empty except for our group but that didn’t stop us all having a good time until the early hours of the morning when we were kicked out, the staff wanted to go home. Some continued the party in the hotel bar but Keryn and I took the chance to get some sleep instead. 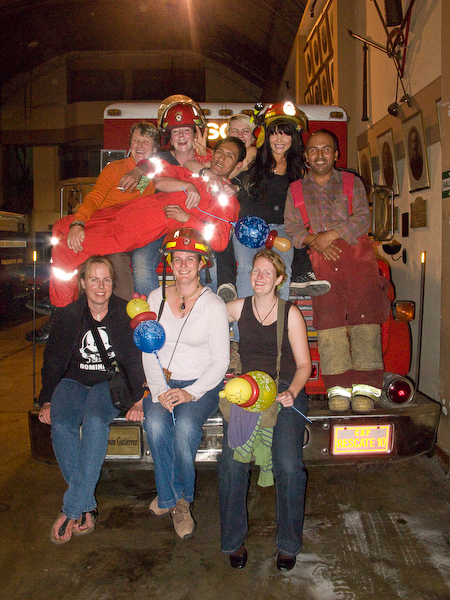 A photo with some local firemen 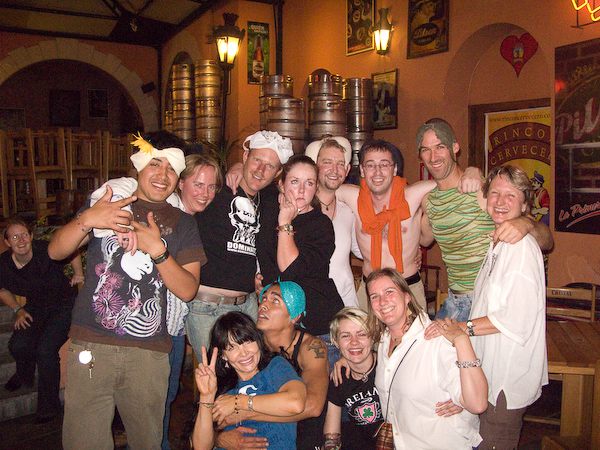 Make your own mind up