For the first time ever on a travel day we were actually leaving in the late morning so we had as much of a sleep in as the temperature would allow. We didn’t do much in the early morning other than returning the empty beer bottles and taking down our tent. We did have a morning activity which saw us drive out of Nazca and head on a sandy road to the Chauchilla Cemetery. We had a guide for the journey, her name was Hilda. 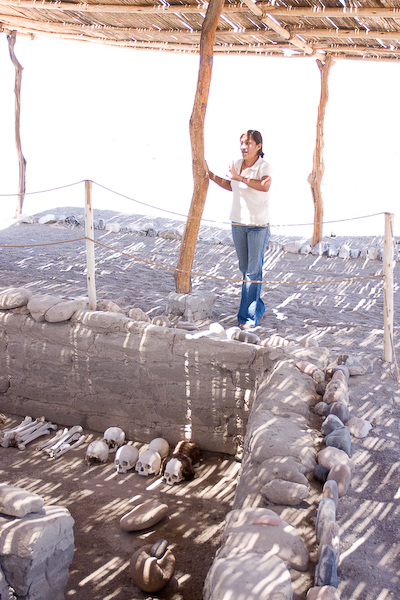 Hilda talks about the cemetery

The desert around Nazca is very dry, it’s one of the driest places on earth. A pre-Inca civilisation had used the plain as a burial ground, burying the wrapped corpses in graves lined with mud bricks with the depth an indication of the status of the occupants, the higher the status the deeper the grave. Over the centuries the site had been looted by grave robbers but carful investigation has so far uncovered twelve grave sites contained very well preserved remains. 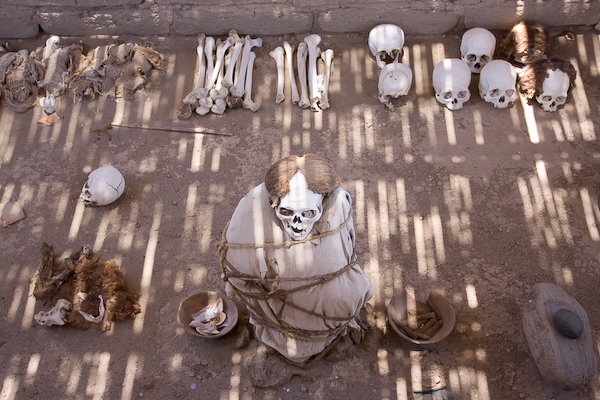 An exposed grave at the Chauchilla Cemetery 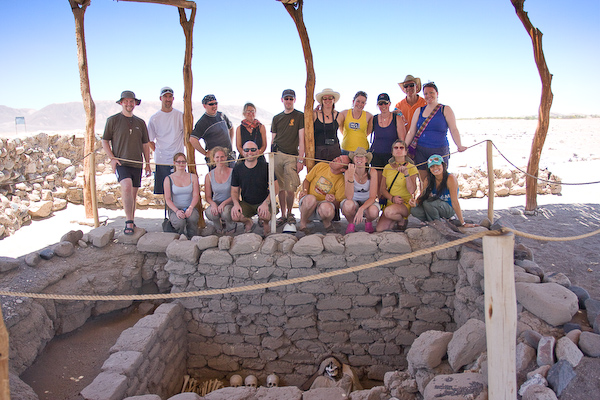 Hilda was exceptionally knowledgeable and enthusiastic about the site, she had given talks about the Chauchilla Cemetery at International conferences and communicated what she knew very clearly. When Hilda first saw the site and the newly uncovered remains they all still had skin and other features but a time of strong rain coupled with the hot temperatures has caused most of these features to have rotted away. Many of the mummies still have hair and some still have the dried remains of eyes and there was a tongue as well. It was another case of speculation about the people who had used this cemetery, though Spanish texts from the time of the Inca conquest give some insights into the area. 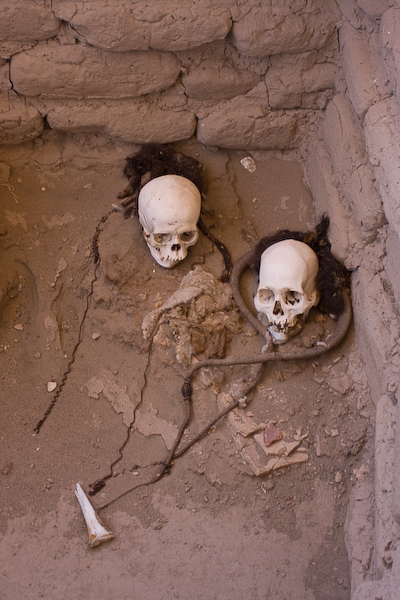 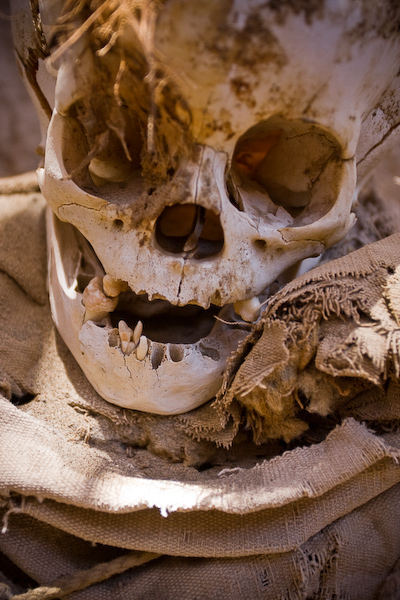 The decaying skull of a buried child

We wandered around and then had a good lunch before starting further down the coast heading for the ancient Inca port which now holds a hotel, Puerto Inka. The drive took a little more than three hours and we drove along road carved from the sides of permanent dunes. At one point the road was being covered by sand, it must be a constant headache for those that live nearby. In one valley we stopped and bought some olive oil. At some unspecified time in the past an olive grove had been planted and now the valley is renowned for its olives. It was like a little piece of the Mediterranean somehow transplanted to South America. We also collected wood for the coming BBQ. 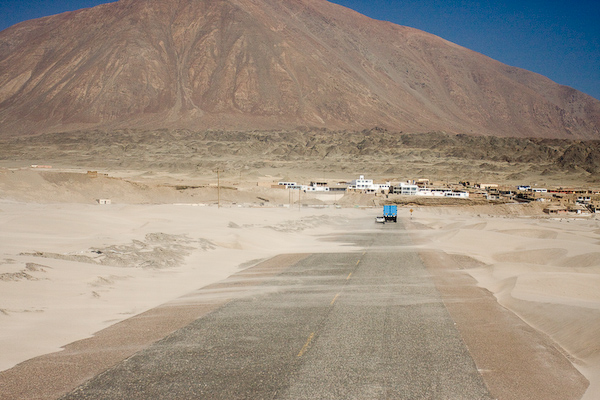 Driving further on we eventually turned off the road and followed a sandy trail down to the hotel on the beach. We camped on the beach looking over the breaking waves from above the high tide mark. The beach was reddish sand and either side of the cove rocks lined the shore. An Incan ruin could be seen above the rocks past the hotel and there were more over the other side of the headland.

We had the chance to challenge the hotel staff to a game of football but in the end only one guy played, everyone else from the truck with a couple of local lads being roped in by Mark (one of the newer passengers, a Kiwi who has been living in London for eight years to date). The pitch was sandy with a liberal sprinkling of small stones and wasn’t exactly flat. Tackles caused a cloud of dust which made life difficult for those watching. I’m happy to say I was on the winning team, even scoring a goal in the 3-1 result. It was a lot of fun to be running around again.

We had another BBQ and took care to prepare things correctly this time, ending up with a deep layer of glowing coals in the fire pit on the beach. The steak and chorizo were cooked much more quickly than the previous attempt and were cooked not too long as well, even if I do say so myself. After eating Sean was subjected to a number of tasks and he was up for anything and everything asked of him. People were invited over from the hotel and joined in a conga line around the campfire and then watched with amusement at the guys all completed an obstacle course using the nearby childrenâ€™s jungle gym, Sergeant Kerry urging us on. It was a fun and memorable night on the beach, the breaking surf helping to put people to sleep as they drifted away from the party. 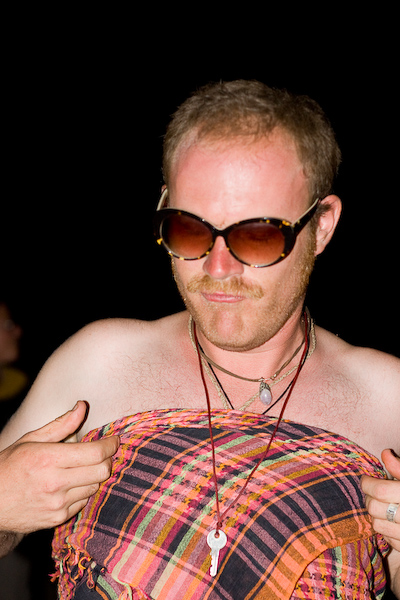 Sean dressed up for the party 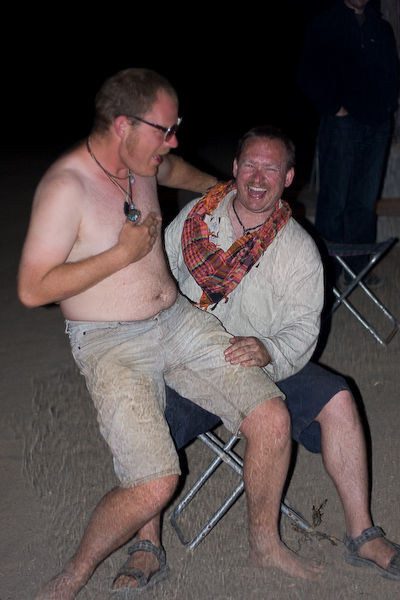 Taking part in a task 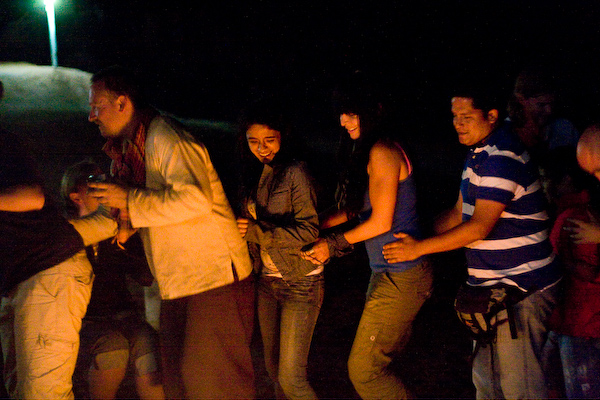 Conga around the fire 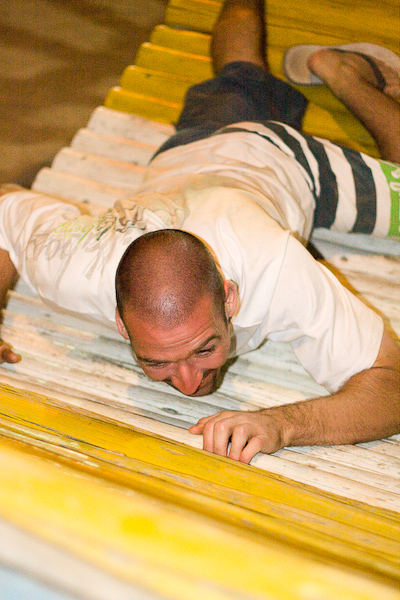