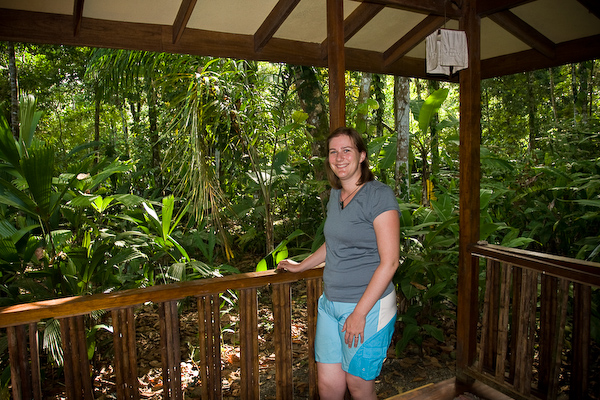 Keryn and the veranda of our house at Pachamama 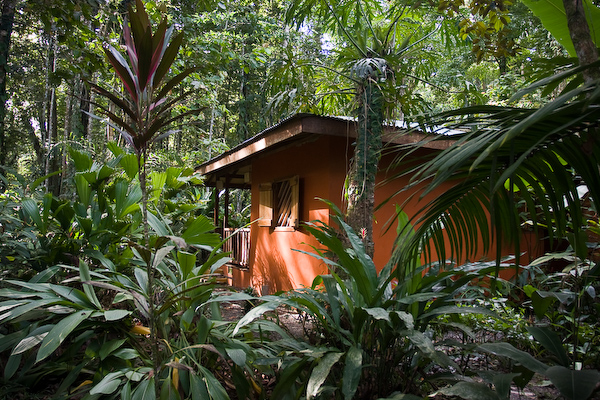 Looking back at the house from the garden/jungle

Having eaten we decided to make use of the Pachamama kayaks this morning and we set out down the stream adjacent to the property just after 8am. Heading upstream was easy with there being no discernable current in the coffee brown water. There were a couple of points where we had to push over submerged logs and branches and occasionally the water got a bit shallow, causing us to change our route, but all in all it was quite relaxing. The forest rose high on each bank and it was peaceful, just the sounds of the jungle and us paddling through the water. 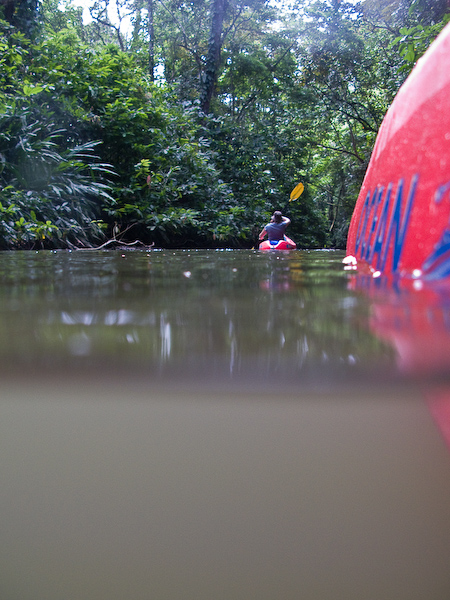 Other than a few crabs and a kingfisher or two we didn’t see much on the way upstream. We got to a point where we couldn’t go any further, the stream getting far too shallow and narrow, so turned around. The return journey was better for wildlife; I spotted a large turtle slipping into the water from its resting point on a branch and we sat in the stream for a while and watched a troop of howler monkeys playing and feeding in trees near the stream. There were also a number of toucans flying around near the monkeys and making funny toucan noises. One I saw was quite large with a yellow tail and matching yellow beak contrasting with its black body. 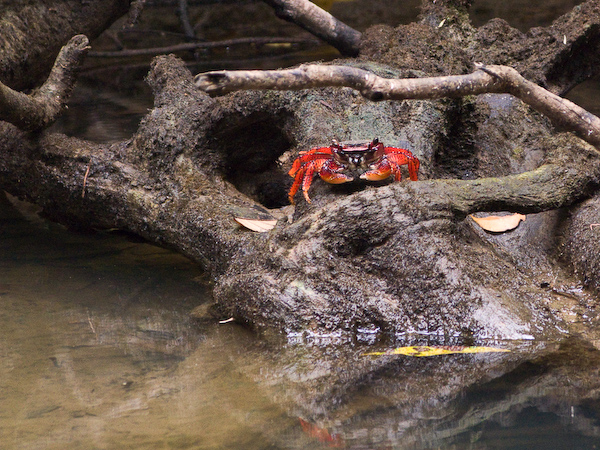 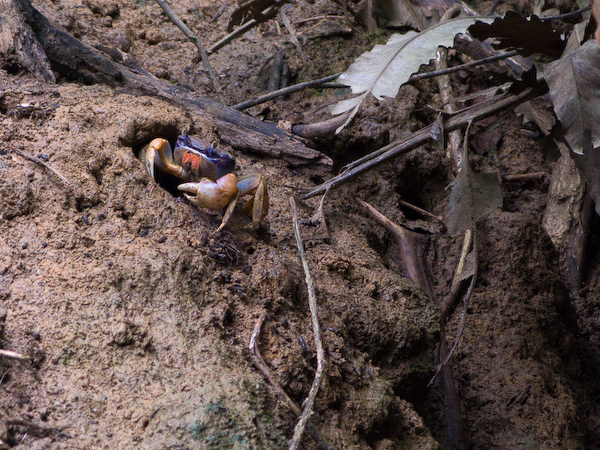 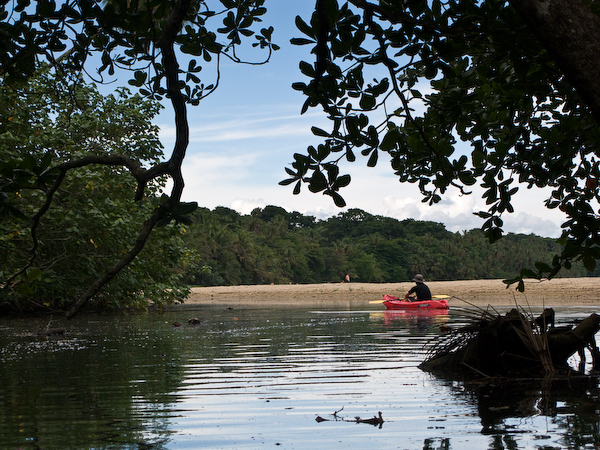 We passed Pachamama and went under the road bridge, people waving as they drove past. Heading towards the beach we saw lots more crabs; big ducky blues and smaller ones with mainly red shells and claws. Keryn was a decent sized fish flash past as she got near one of the banks. We reached the beach, already there were lots of people present. We turned around, we’d been bitten a few times and wanted to get back for a shower and some bite cream. We pulled the kayaks out of the water and cleaned up at the house, relaxing until lunchtime. 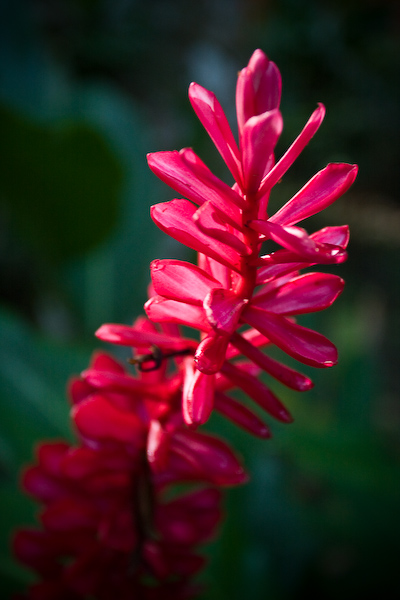 Flowers in the garden I 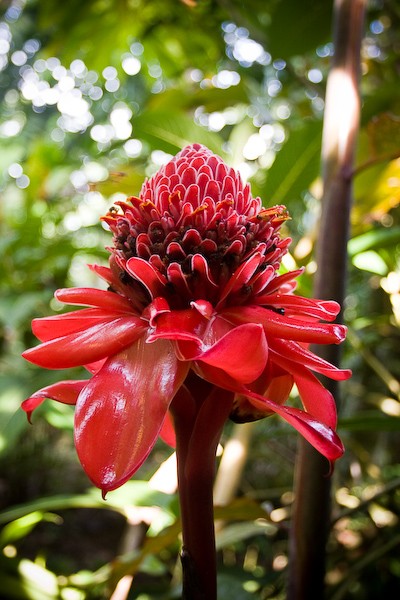 Flowers in the garden II

The afternoon was spent doing a little bit of organising and a lot of resting. We ventured out in the late afternoon to watch the sunset, it being a lovely day, and managed to see a bit of colour and a wonderfully deserted beach. We were unconvincingly chased by a posturing turkey on the way to the beach and it was patrolling the road stopping people and traffic, obviously having decided that it owned that section of road. On the beach a heron patrolling along the surf catching little fish and it was quite unconcerned by us watching so I took lots of photos. The heron was almost comical the way it ran to avoid some of the small breaking waves. We tried walking on a path at the end of the beach to see if it went to a viewpoint out on the point between Punta Uva and the next beach (I’m not sure the next part is Playa Grande, there might be another name for the next bit) but found only a path to a slip half way out, some leaf cutter ants, a few bullet ants (very much avoided) and a large rodent of some kind. 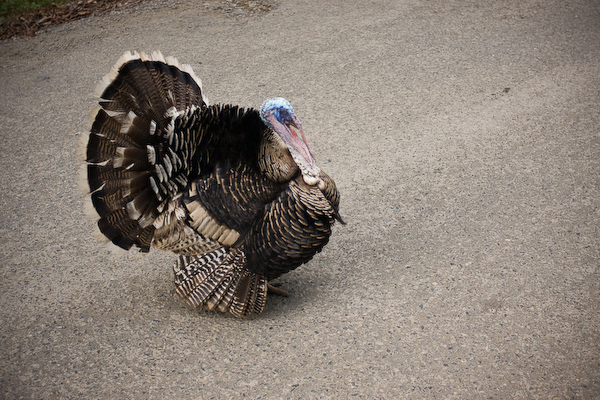 Keep off my road! 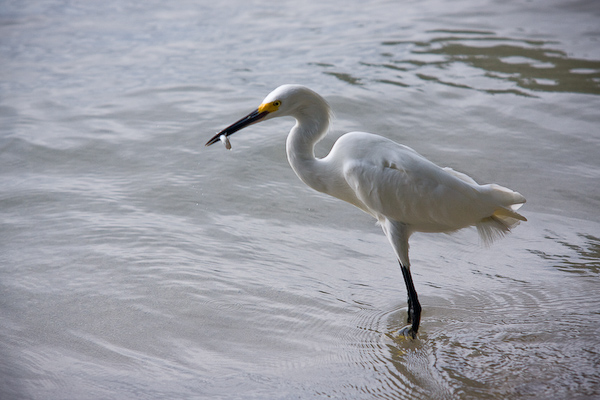 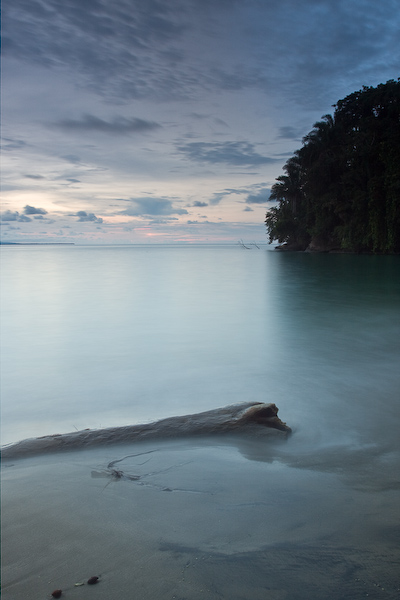 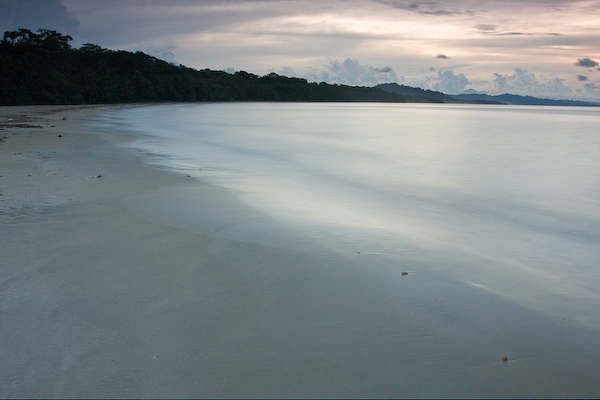 One last look along Punta Uva

Once it started getting dark we returned to the house (picking up a last load of washing and some very tasty cookies that Cathy had baked earlier that day), dropped off our bags and went out again for dinner to a restaurant called Selwyns just down the road. Keryn managed to nearly step on a small snake which she mistook for a branch – thankfully the snake was more worried about getting away than biting. Dinner was good, my steak was very well cooked while Keryn’s snapper was just OK (I’ll get Keryn to have a good meal one of these days, I just haven’t found the restaurant yet).

After dinner it was back to the house for final packing and I finally got around to backing up all the photos to DVD. Then it was one last time to sleep in our comfortable bed, the Central America leg almost over.