We got given no breakfast this morning so we ate what we had and then borrowed bikes to cycle down to a cafe where we could eat something and also use the Internet. This ended up taking most of the morning but the blog is now up to date and we got to sort out a few more things. We still don’t know if we’re going to the Galapagos but have received an email saying that we’ll have an answer in the next couple of days.

Back at Pachamama we thought we’d go snorkelling seeing as the weather was good. It had rained this morning early on but that is the only rain we’ve seen over the last couple of days. Bill and Cathy sorted us out some snorkelling gear and we got back on the bikes heading out towards Playa Grande, the next beach from Punta Uva. We cycled past a number of different houses and little hotels on the beachfront, it being Saturday there were many more people out that we’d seen over the last few days. We finally settled on a patch of beach and locked up the bikes and then sorted out the snorkelling gear.

The water was quite warm and the sun was out but there was a bit of a swell, the ocean a little bit choppy. We only had to walk out a few metres to start seeing coral so soon had masks and snorkels on and we were on our way. There were plenty of little fish, mostly green or brown and blending in with the coral and sand. The swell was causing us issues, we were being pushed all over the place, staying still wasn’t really possible. Heading out further we got to a coral shelf that descended a few metres so we followed it trying to see more fish. The odd larger fish appeared; I saw a pretty orange and yellow parrot fish and some larger blue fish sailed past in the deeper water. The visibility here was not too good with sediment everywhere being pushed around by the waves. It wasn’t too long before we’d had enough, it just wasn’t enjoyable wondering when the waves would push us on to the coral and the poor visibility increased irrational fears that something might appear that we didn’t want to see. 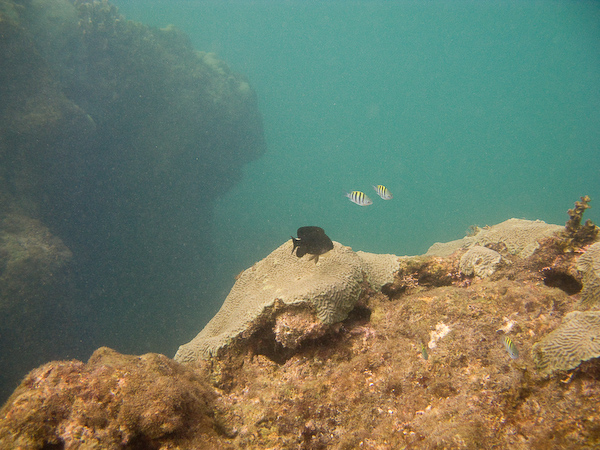 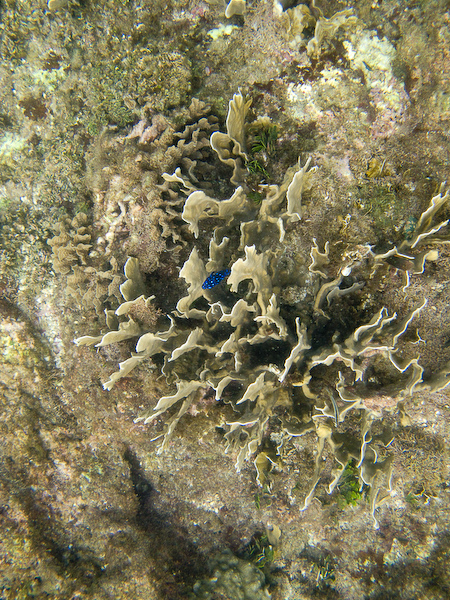 The little blue guy protecting his patch of coral

There was one variety of fish that was quite cool, a little deep blue fish with bright white spots. It would dart around one piece of coral, quite territorial and nipping at any other fish that got too close to its area. Nearly back at the shore I saw a well camouflaged fish in the sand, looking like seaweed more than anything else, at least until it moved. Back on shore we dried out by standing around and watching the activity around us; there were three lads in the shallow surf drinking beers and leering at any woman who walked past; families further down the beach relaxing and swimming; other people just walking along the beach enjoying the nice weather.

Mostly dry we headed back to the path and Keryn took us further along the beach to see what else there was to see. We came out in front of a nice looking hotel, all manicured grass and ocean facing bungalows. Riding a bit longer we came to the end of the hotel area and had to stop as a wedding was underway, the bride in a big white dress on the beach being photographed and white covered chairs with red ribbons arranged behind a similarly decorated gazebo on the beach. Next to this arrangement a set of normal deck chairs were arranged, the people on the beach already not moving from their spot and looking like they were going to enjoy the ceremony as well.

We turned back and also visited Punta Uva beach but there were lots of people there so we didn’t stay. At the house we relaxed for the rest of the afternoon, only stirring to make dinner. We made nachos and ended up with two plates piled high with corn chips, Mexican sausage diced into a tomato sauce and extras like refried beans (none for Keryn), fresh tomato, guacamole that Keryn prepared, cheese (not for me of course), grated carrot and capsicum. It was nice but probably a bit much. There was no rain this evening but the house was pleasantly cool so sleep came easy.