We drove from El Calafate to the Torres del Paine national park in Chile today. Lunch was had outside a petrol station and a few of us took the opportunity to photograph one of the iconic Ruta 40 road signs found in Argentina. We have been travelling on the main highway under different names on and off for months now, right down the west coast from Ecuador. 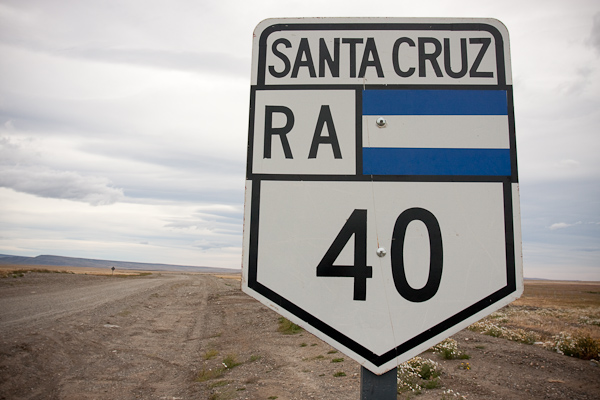 The border crossing was fairly straightforward which made a nice change, though we did have to have all of our bags individually inspected when we reached Chile. We had some time in the town of Puerto Natales to stock up for our four nights in the park and it was at a bookstore that I bought a really good book; Terra Incognita by Sara Wheeler. The book tells of Sara’s time in Antarctica and mixes her travels with history about the continent. It’s a fascinating read and tied quite nicely in with some of our travels through Chile and Argentina, I now have a small list of other books I want to read now I’ve finished this one.

It started to rain as we drove from Puerto Natales to the national park. We were staying in a campsite, Camp Pehoe, and arrived to grey skies and drizzle. Tents were set up giving as much cover as possible, we’d been told that the weather here and especially the wind at this time of year can be horrendous so we were preparing for the worst. Dinner was cooked underneath a shelter and the cool temperature and wet conditions saw most off to bed reasonably early.