There was another glacier to visit and in the morning we all piled into a bus for our journey out to see the Moreno Glacier. Larger and more spectacular than the Viedma Glacier the Moreno is also much faster moving and daily large chunks of ice fall from the face into the fronting lake and hopefully we would be able to see some of this action.

We drove out of the city after picking up a few more passengers and then headed off on a wide, dusty gravel road towards the glacier about 80kms away. We stopped a few times to watch wildlife such as caracara raptors, rheas and guanaco. Our first proper stop was at a funny little cafe.

The road made its way along a wide valley floor lined by farmland being grazed by los of sheep. The cafe was on a small hill with views down the valley across the farms, a river visible in the distance. We were all kept entertained at the cafe by a herd of goats, one young kid being especially friendly and a young pair, a lamb and a guanaco which were forever trying to get inside and when inside they would follow one of the owners around, obviously looking to be fed. I don’t know that anyone actually ate or drank, we certainly didn’t. Inside on a wall were three photos of a puma being harassed by some farm dogs, cornered in amongst rocks on a nameless hillside. 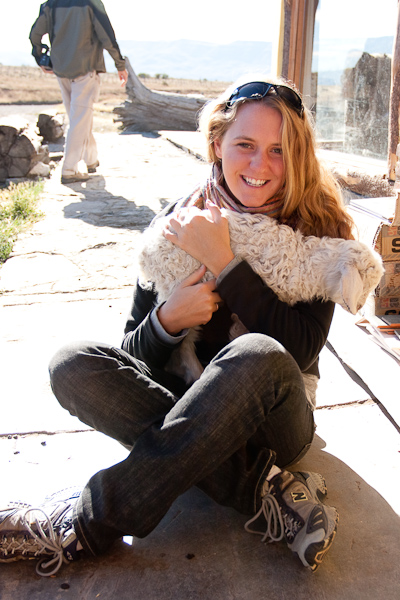 Katie with the young kid 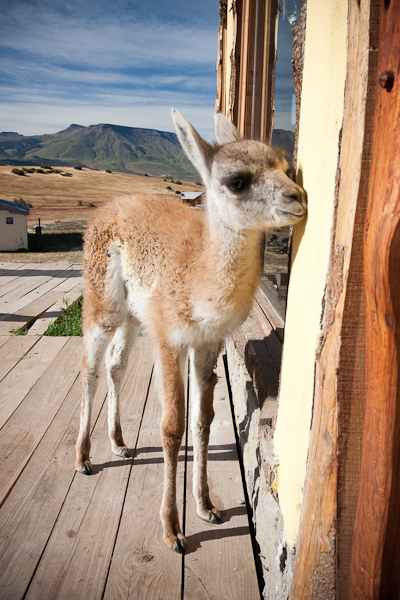 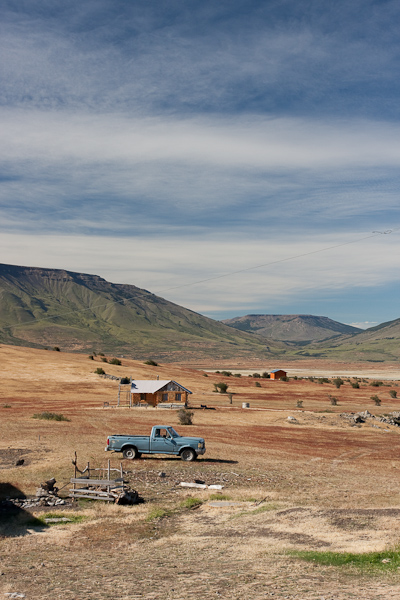 A countryside view from the cafe

We had another stop at a secret viewpoint. Stopping on the road we climbed a path near invisible from the roadside up to a large iron pole which had skewered a small tractor, both shaft and vehicle slowly rusting away. We could see down to the glacier and saw tiny boats sailing back and forth below the glacier and the majestic mountains behind. 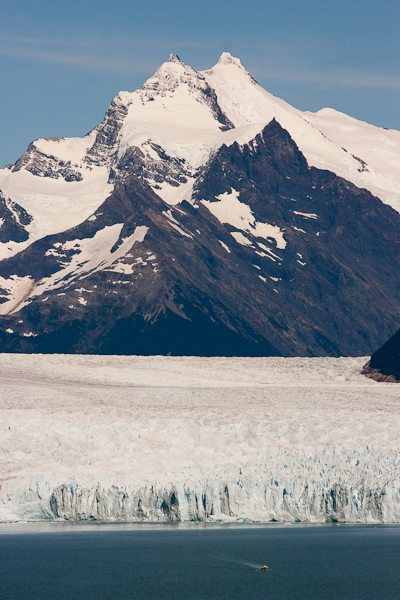 The glacier view from the lookout

Next we stopped on a peninsula, the point meeting the advancing ice. We took a boat ride much like the one a few days previous and sat watching the ice, waiting for a fall. We were lucky enough to see one large shelf of ice peel itself away from the face and plunge into the water. The wake generated was large though it had largely dissipated by the time it reached the boat. The noise was loud and spiky, a large crack followed by the scattershot noise of chunks of ice falling into the water. 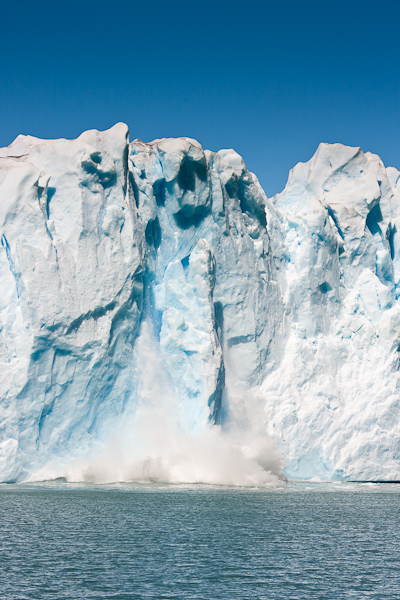 A falling tower of ice 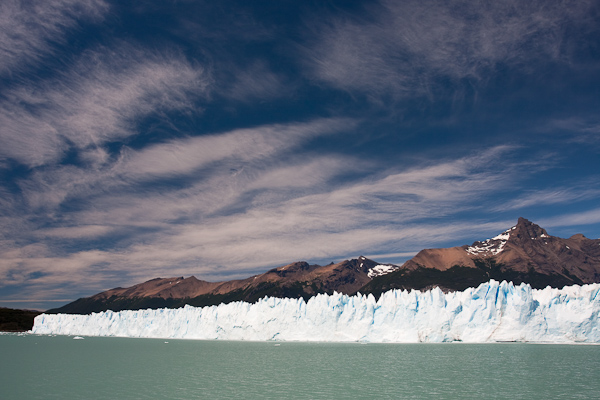 Looking along the glacier from the water 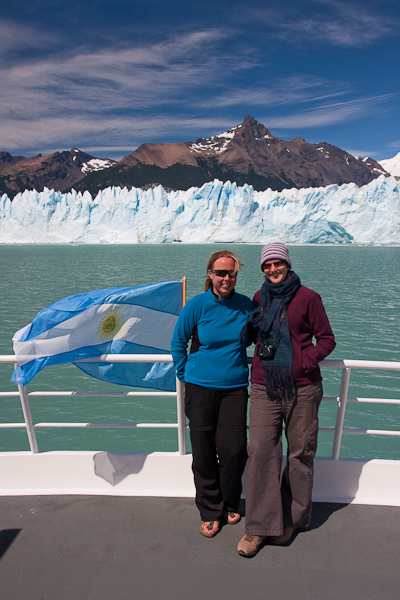 Keryn and Janet on the boat

Heading back to shore after an hour or so we were driven to a lookout point at the end of the peninsula and here we had a few hours to wander the boardwalks that snaked across the hillside. Nearest the point of the peninsula there was only a narrow bay between us and the glacier. Any noise in this area was amplified by the enclosure of ice and cliff so any falling ice made a very loud noise. The ice here was constantly cracking and snow and tiny shards of ice falling sounded like large events. I was wandering pretty much by myself, stopping for a while in a place and then moving on. I had settled on a spot near the narrow bay and was lucky enough to see one huge tower of ice shear from the glacier and sink into the water, looking like a huge white building falling after a dynamite demolition job. The cloud of ice and water was huge but the aftermath strangely underwhelming other than a few waves pushing the floating ice in the area around for a while. A couple of shiny sapphire pieces of ice were pushed to the surface, sitting sparkling in the sun in contrast to the whiteness of the other floating blocks. Keryn and Janet were nearby and also saw this massive calving, not many other people from the bus got to see it. 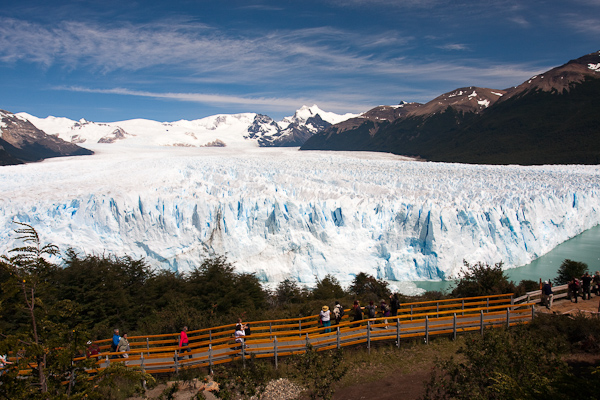 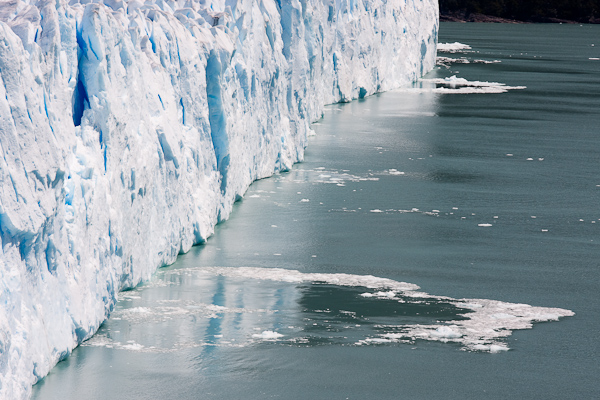 The aftermath of ice falls visible in the water 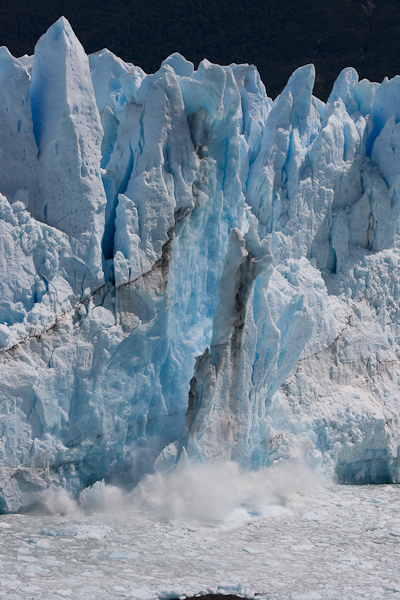 The big ice fall part I 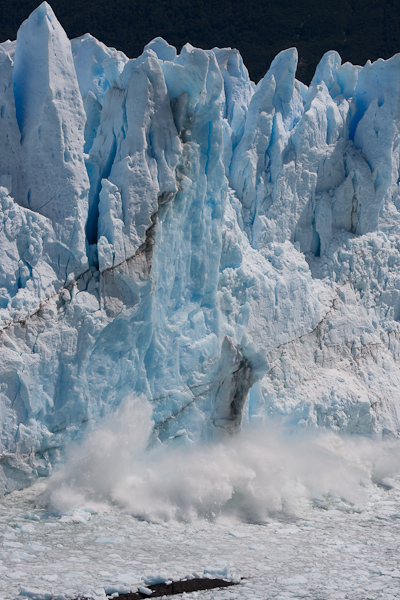 We heard a few other large ice falls but were in the wrong place to see them. Back at the carpark there was a restaurant and I sat outside eating my packed lunch while we all waited for our scheduled meeting time. For the drive back to El Calafate I was asleep most of the time and our evening was relaxing, other than cooking a bit of food up for dinner.