A good nights sleep can erase lots of bad memories and this coupled with a nice day turned my mind from the previous days loathing. I wasn’t really physically ready for walking, my legs stiff, my knees aching, but I still managed to hobble down to the lake shore and get some nice morning photos of the mountains. By the time I got back to the truck I was ready to tackle the final stretch of the W walk. Billy drove those who wished to the point where we had caught the bus the previous day and photos were taken while we waited for the van. Antonio and I were joined by Katie, Patrick and Jeanette for our final trek up to the Towers. 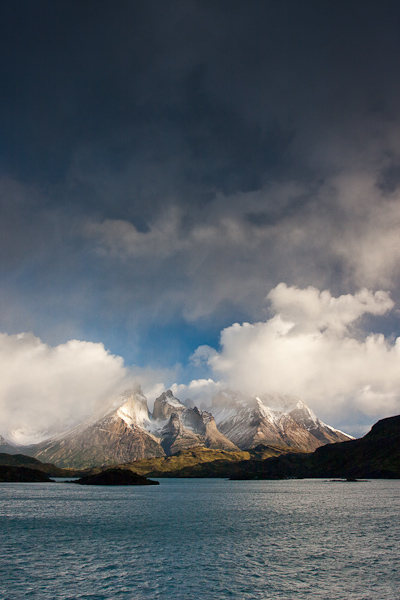 The difference a day makes

The previous night a couple of other trucks had arrived and there were lots of people heading up to start the W walk or just trek up to the Towers. The weather was a complete contrast to the previous couple of days. We had sunshine, blue skies and fluffy little clouds. The track was quite steep, taking us up one side of the Valle Ascencio, and we passed a lot of people taking rests. The views at the top were very good, looking back over the lakes to a line of snow covered hills in the distance. 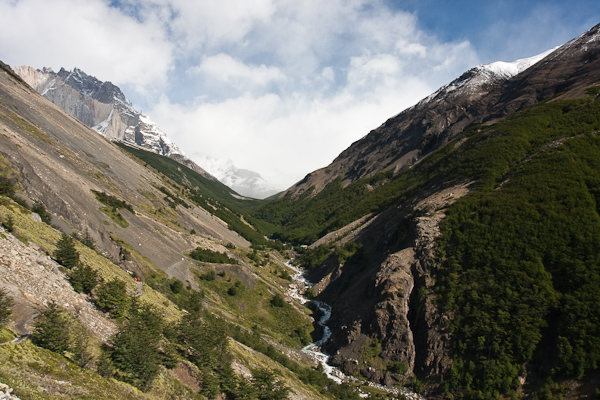 The view along Valle Ascencio

From here the path travelled along the valley, slowly heading down towards the Refugio Chileno. We had to ask which was the correct path at the Refugio as there were two sign posted routes, one on the same side of the valley we had been walking down and another on the other side of the stream. The Refugio was reached by crossing this stream on a wooden bridge and the path we took led away from the Refugio through a forest that hugged the valley floor.

We crossed back over the stream and then headed upwards again, still under cover of the forest. Things got interesting when we left the forest and came to a rocky slope leading up to the towers. The boulders and smaller rocks had a number of different trails all heading upwards and we picked our way slowly up, the distance between rests steadily decreasing. By the time I got to the top it had been three hours since we had set out and my knees and shins were very sore. Still, it was very good to be at the destination and we were lucky enough to be able to see the towers that give the park its name. It was still sunny though the cloud was thicker here. Coming up the valley we had been walking through sunlight and light snow showers, Antonio thought the snow was probably being blown off the higher slopes. 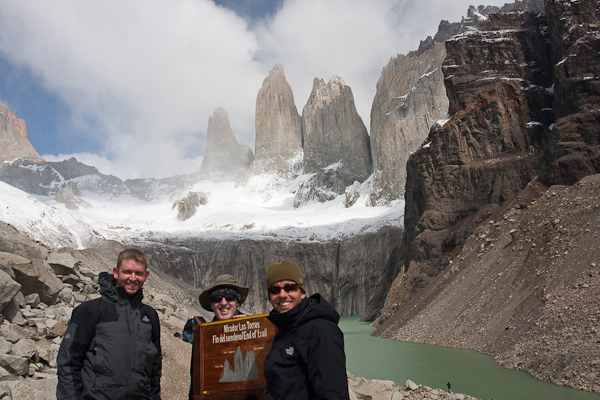 The guys at the top 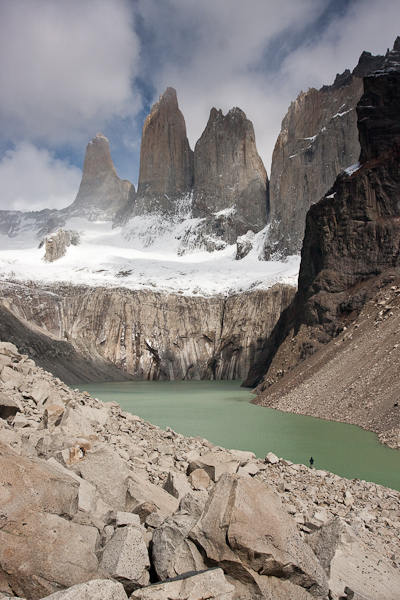 The Towers dwarf the visiting hiker

We ate lunch and took photos. The Oasis people we passed all turned up over the next hour or so, their tour leader Heinz appeared wearing jandals (thongs/flip-flops) of all things. I couldn’t have done the walk without proper shoes.

The return walk was quicker in the end, being mostly downhill, but was very uncomfortable for me. My knees and shins did not at all like going downhill and I arrived back at Refugio Los Torres the last of our group but thankfully we still had another half hour or so before the vans would be departing. Being a warmer, drier day we didn’t have any problems fitting in at the fancy hotel and we reclined in the plush couches of the hotel reception while we waited for our transport. The return to our truck was uneventful, I slept for a bit of the journey and it seemed to fly by. 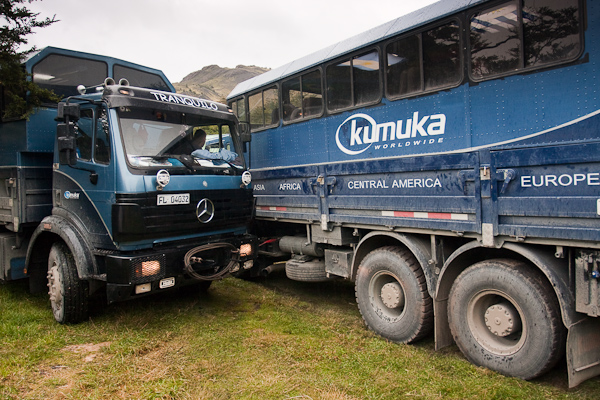 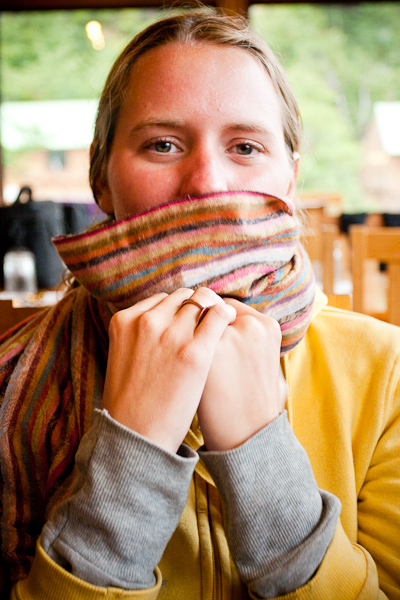 Katie wrapped up at dinner

Back at camp there were more trucks, Tranquilo one of them. We talked to Rhys and Vanessa and I returned the backpack which was now dry after a day pegged up in the wind. The weather at the campsite was wet and windy, quite the contrast to that further into the park. It was again good to relax at the truck and get a descent sleep, preceded by a meal at the campsite restaurant. Tomorrow we would be heading south in Famoo towards the city at the bottom of the world.