I had a restless night’s sleep and woke a little disorientated. From inside the tent it sounded like it was still raining and once I could focus and look at the nearby ceiling of the tent I could see it was lined with a covering of water drips, presumably the result of the heat of our sleeping bodies interacting with the chill and damp outside. Every movement taken while getting ready to venture outside caused a small shower of water as the drips fell. Breakfast was energy bars. Jimmy was still in his tent and Dave was pottering around. They had decided that they had had enough and they would tramp out and head back to the truck rather than spend another night of misery in the little tent.

Antonio and I had other ideas. We figured we’d come this far so we’d walk up the French Valley, our campsite situated at the head. There is only one track up the valley so we left most of our gear at the campsite in the tent and we set off. It was a grey morning, low cloud hanging in the sky but at least there wasn’t any wind or rain. 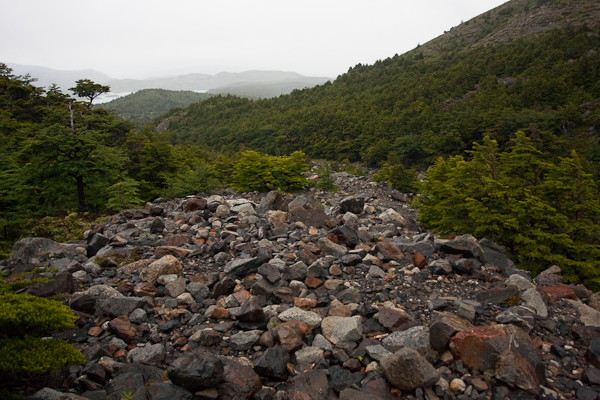 The rocks of the French Valley

The path followed the stream in the basin of the valley and we walked steadily upwards towards the snow covered peaks ahead. The floor of the valley was a mess of rocks and boulders, the path weaving its way through, over and around the stone. We crossed a number of smaller streams that emptied into the French Valley water course. These streams each came down a waterfall and these falls got larger as we ascended. At the fourth waterfall the path turned and became steep as it left the rock field and headed up into the forest. We were now walking over a dirt trail and soon were winding our way between tree trucks on a narrow ridge. The last waterfall was quite large and the melting snow was adding to the flow of the water which raced down slippery rocks, our path turning to follow this new stream. 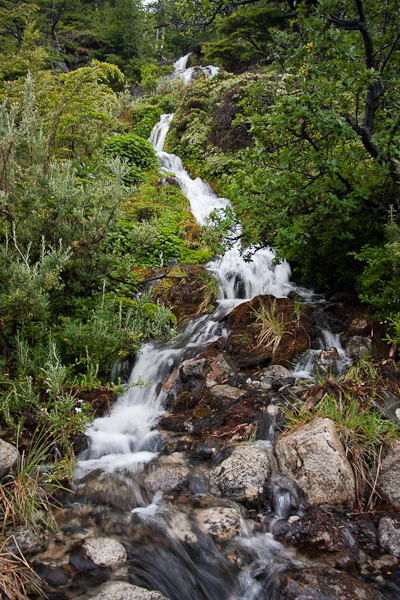 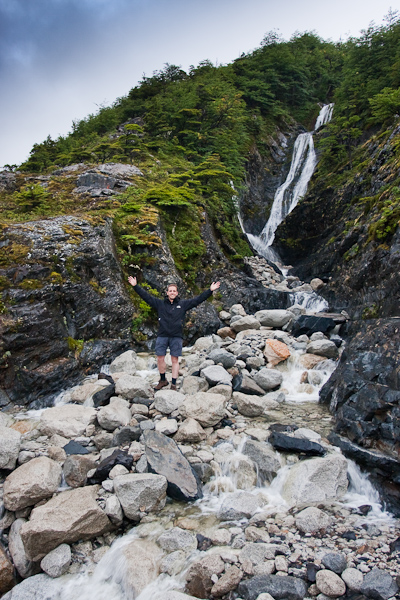 Antonio at the next stream crossing

We eventually came to a higher point and a clearing in the trees where we could see the peaks around us, a point called Mirador Frances. The snow level was a few hundred meters higher than our position and we could see snow melt falling. Every few minutes there would be a resounding crack and if we looked in the right direction we’d see an avalanche tumble towards the rocks below. We met our first fellow walker of the day while watching for avalanches, an American racing to complete the walk from Refuge Pehoé to the end, taking in the French Valley and the Towers walk. He was in a hurry so we didn’t hold him up for long. We looked further up the valley and couldn’t see much above the snow line, the grey clouds seeming to get lower all the time. It was probably another half hour or so to the end of the French Valley but we decided to turn back. We only had so much time in the day and we figured the extra hour (there and back) wasn’t worth it to see nothing different than what we could already see – the clouds hiding the back view of the Towers. 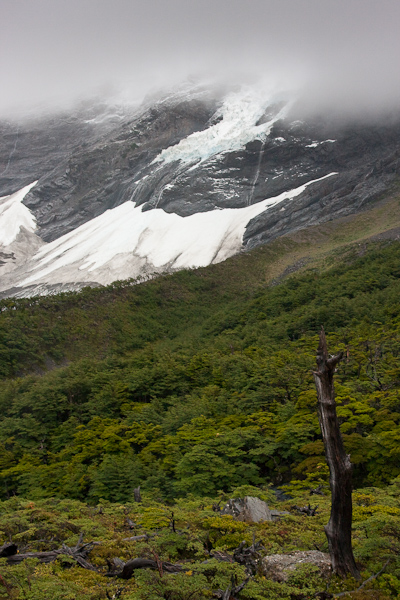 Looking towards the snow from Mirador Frances 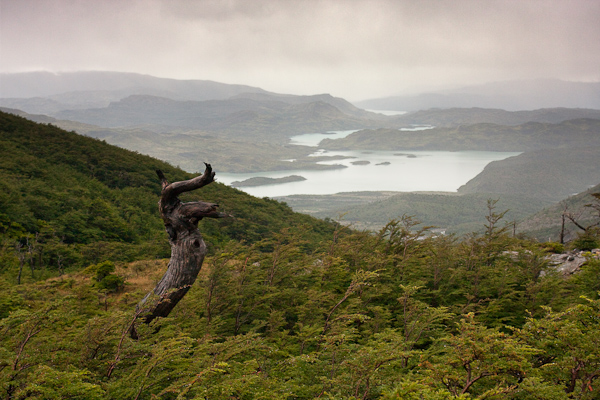 Looking down the valley to the lake 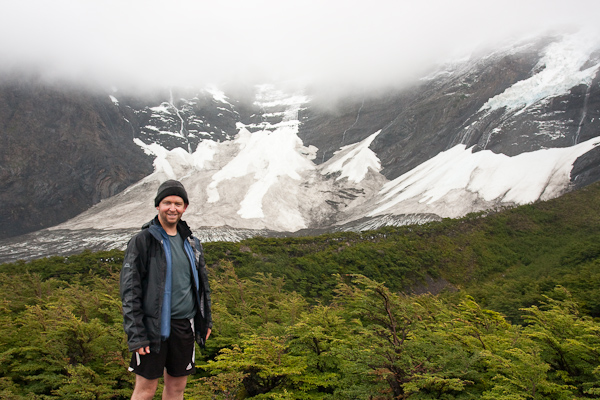 Smiling on the outside (actually, at this point everything was good) 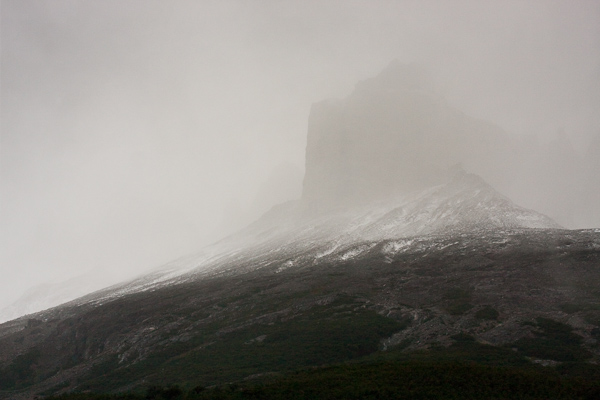 The walk back to camp was quick and we set about taking down the tent and getting ready to continue. Dave and Jimmy had already gone, I found Jimmy’s sunglasses on the ground as we were walking out of the campsite. We passed a tent that was now in the middle of a stream, the overnight rain turning previously dry areas into water soaked mud. Thankfully we hadn’t had to deal with such things.

We walked for a couple of hours along a good path through more forest, the track running largely parallel to the shore of Lago Nordenskjãd on our right. The next stop was at Refuge Los Cuernos, we arrived as a light rain started to fall. Antonio had a hot chocolate and we relaxed for twenty minutes or so. Outside the rain was a getting slowly heavier and we left all wrapped up in our wet weather gear. We had another stop further along at a point where the track went along the shoreline, a beach of small round rocks following the gentle curve of a bay. It was beautiful and tranquil, the last time we experienced peace that day. 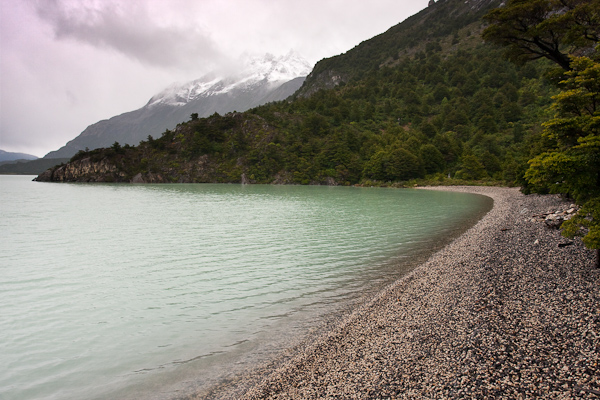 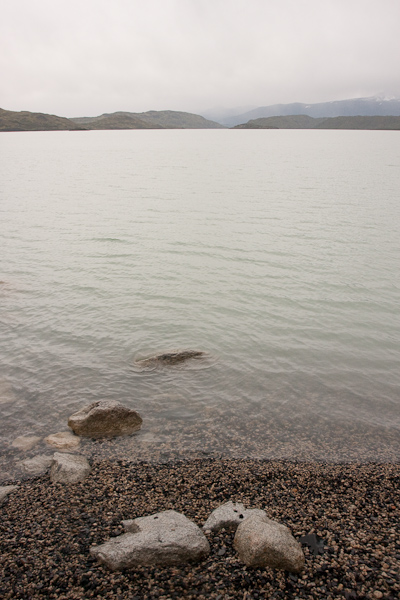 The final two hours of the four hour trek from Refuge Los Cuernos to the Las Torres Refuge was as bad an outdoor experience as I’ve ever had. The rain got harder as we left the forest and walked over hills covered in grass and low shrubs. The wind picked up, flashing the rain into our faces and penetrating through all our supposedly wind and waterproof gear, leaving us soaked. I was tired and getting very sore, my knees first aching and then becoming very painful as we pushed through the weather. There was nothing to do other than continue, we didn’t help ourselves by taking the wrong path at one point and taking a thirty minute diversion through sodden fields where horses roamed. The wind was doing its best to stop us getting to our destination, my body had had enough and mentally I was over the whole thing. Before we discussed it I had already decided that I was going to head back to the truck, camping be damned.

We trudged into Refuge Las Torres bent into the wind; cold, tired and hungry. We first stopped at the fancy hotel but were advised to move on to the refuge (all the best not to disturb the guests I guess). The directions were rather vague and we found ourselves walking past the hotel restaurant, a stable and then through the staff accommodation before being pointed onward down a swamped dirt road. We walked for another twenty minutes and passed through a campsite of windblown and wet tents, some nestled in growing pools of water, some half blown over. The horses in the campsite also looked miserable. There was a store which we bypassed and after passing the common room building for the campsite we crossed a swollen stream on a dodgy wooden plank and headed to a warm looking building.

The Refuge was dry, a very good start. We found out the time of the next van out of the park and then each got dry and changed in to dry clothes in the Refuge bathroom. We then went into the restaurant/bar area, dragging our saturated packs and leaving them to puddle on the floor while we warmed ourselves on the most wonderful wood burning heater found in one corner of the room. There were other people there also warming themselves. Antonio amused everyone when he got a little too close for a little too long and singed a hole into his trousers. It was a very hot heater.

The time came to catch the transport out to where the bus would be waiting so we got all packed again and headed back out into the blowy misery outside. We stood next to a sign by the road where the van would be stopping. The sign blocked a lot of the wind and horizontal rain so it was only uncomfortably cold rather than cold, wet and windy. We were joined by a number of other sodden wretches, one Israeli guy looked like he was going to shiver himself to death as he huddled in the lee of the sign. The van arrived and quickly left again as it was full. Thankfully other vans arrived and everyone got transport out of the park.

At the bus stop a half hour drive away we found Jimmy and Dave. Jimmy was hunkered down in the corner of the wooden bus shelter, all wrapped up and doing his best to stay warm. They had got here a few hours before us only to find that the next bus wouldn’t be departing for a long time. It eventually left about fifteen minutes after we arrived.

It was good to get back to Camp Pehoé. Just about everyone was on the truck swaddled in blankets or sleeping bags. They were surprised to see us all but understood once we’d explained the conditions. Keryn and Janet arrived later on, the last ferry coming back later than our bus. They had walked to the Italian Camp and then back to the Refuge.

I had a shower and it was the best shower ever, no doubt about it. They were good showers to start with; lots of pressure, a decent shower head and lots of heat. Given how beaten up I felt it was bliss to stand under pounding hot water, I could have stayed there for hours. We had dinner and I had a beer, more bliss. Heading off to sleep I was grateful for a dry tent, dry clothes and warmth in general. There was no way I was heading back to the W walk; wild horses couldn’t have dragged me.