There are a number of treks in the Torres del Paine national park and the most popular is called the W walk. The walk can be done either clockwise or counter-clockwise and involves walking up three valleys, from above the path making a W shape. Four of us decided we would do the walk, camping overnight for two nights and completing in three days. To start we had to catch a ferry to the starting point at the Refuge Pehoé across Lago Pehoé. Billy drove us with Keryn and Janet who were also walking some of the W and a bunch of others who were doing a shorter walk from the ferry dock to a waterfall. 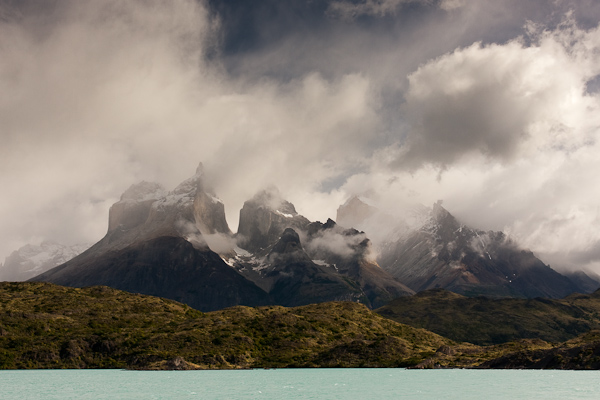 Mountains seen from the ferry 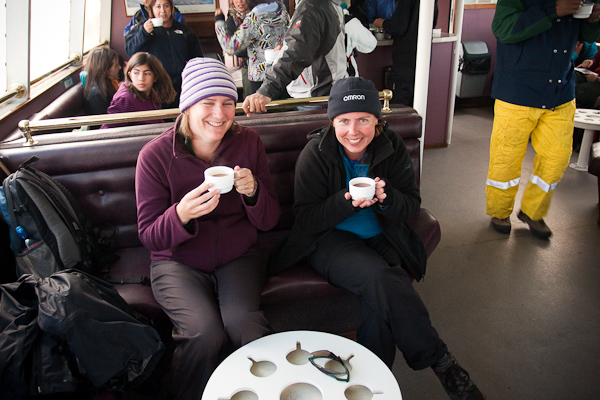 Keryn and Janet share a hot drink on the ferry

The ferry ride was pleasant with free tea, coffee and hot chocolate on offer. The mountains we were to be walking around were topped with fluffy clouds in a deep blue sky and looked amazing and there wasn’t much wind as we traveled to the Refuge. Arriving we waited while Keryn and Janet were shown to their tent (pre-pitched and being rented for the night) and once they had it we all put our large bags inside so we wouldn’t have to carry everything as we walked up to the Grey Glacier viewpoint. Keryn and Janet were taking a slower walk, the other four of us (being myself, Jimmy, Antonio and David) set off ahead of them as we had further to walk in the day and would be walking at a faster pace. Actually Dave stayed behind for a while as well, he had gear wet after a night sleeping in a partially wet tent and wanted to see if the growing wind and sun would dry things out before he set off. 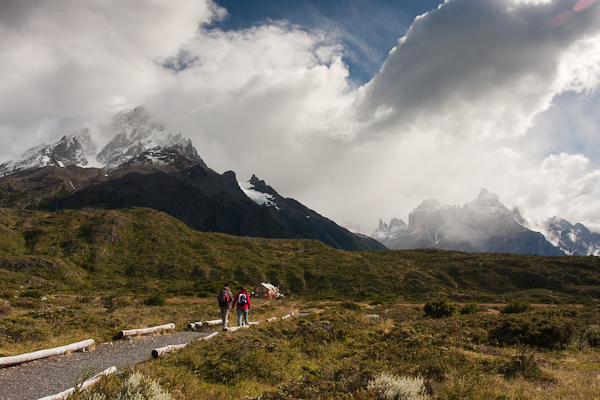 Others set off for a walk from the refuge

So that left Me with Jimmy and Antonio and we headed off down the path. We passed a National Park office and they had a weather forecast up for the week. it didn’t look too good, rain and high winds forecast for the next few days. Still, we were only here once so we continued.

The first hour or so was pleasant with nice weather and a fairly flat track leading up a valley. We stopped a few times to fill our water bottles at streams, the water here very much drinkable. As we slowly climbed we walked past a few small lakes and then came out to a point where we could see Lake Grey and a few icebergs that appeared as small blue dots on the water.

The path was now more exposed and the wind was increasing. We came to a point we named windy hill and here we learnt what one of the funny symbols on our map was, it meant high winds. I’ve never really experienced anything like the wind here, it was easily strong enough that we had to lean into it to make progress and it caught at any loose clothing such as the hood on my raincoat. Coupled with the wind there was rain, not strong rain but driven by the wind each drop felt like a tiny stone when it hit exposed skin. All of us were wearing shorts as they would dry quicker if it rained. The final element was the temperature. The wind was being blown from across the glacier so it was naturally icy cold, those little stones becoming ice needles against our legs. I had to put my back to the wind so I could tighten my hood and I struggled to find the draw strings as I could barely feel my fingers. Thankfully I also had gloves so was able to put them on, the others had to make do with pockets. Antonio had to take cover and seek assistance to get his coat out from his bag and put it on and Jimmy hid behind a battered looking bush to change his clothes as well. None of us actually said we should turn back but we all felt like doing so.

But we continued and maybe fifty meters further on the wind died away. The path took us further broadly following parallel to the lake shore. We walked mostly down from here, the weather no longer sunny and it rained infrequently as we passed through forest and over exposed rocks. It took us about three hours to reach the viewpoint, an exposed path leading us too some rocks where we could view the front of the glacier. Unfortunately the wind here was strong enough that the light rain was being driven directly towards us so we couldn’t take a lot of photos, not that the conditions encouraged staying for long anyway. 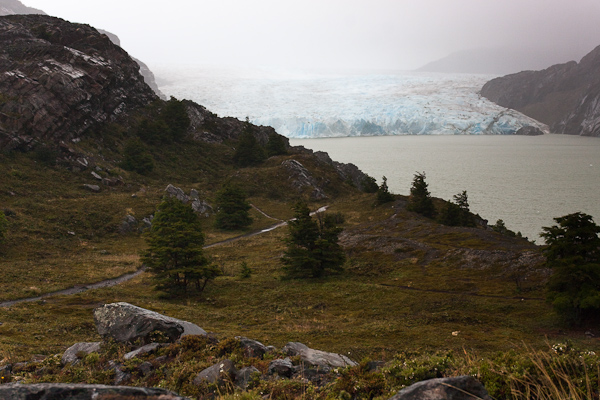 The walk back to the Refuge took less than three hours and we passed first Dave and then Keryn and Janet coming towards us. We swapped driving wind and rain stories and then continued on our way. The wind and rain returned as we came into the refuge and didn’t stop until we had retrieved our bags and then taken cover by the refuge entrance. We took a short rest stop with hot drinks and then it was time to walk again. 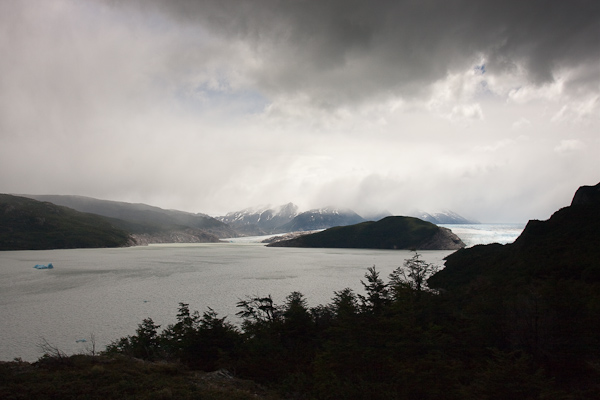 In a little under the sign posted two and a half hours we arrived at Camp Italiano, the walk not particularly difficult but we were now all very tired, wet and rather over the irregular rain showers. We walked on a suspension bridge over a river to arrive in camp and we were not impressed. The campsite was set on undulating ground with extensive tree coverage but looked dark, dank and somewhat swampy. There were lots of people and tents already present so we found some mostly flat ground and set about putting up our tents. The truck tents were too large and heavy to carry with us so we had hired tents from the Camping Pehoé office and we hadn’t actually seen them out of their carry bags before so had to (in the end) refer to the instructions to figure out how the poles intertwined. They were two person tents, just. I shared with Antonio and there wasn’t room for our bags in the tent, they had to go outside underneath the fly in what little room was there. Once we had our gear all set up Antonio and I turned in for the evening, too tired to worry about finding a hot meal and eating the remaining sandwiches from our packed lunch.