Breakfast was eaten very early as we were leaving for the airport at 6:30am. We all assembled in the hotel reception along with another GAP group also heading out to the GalÃ¡pagos. In our two vans we drove off and went through the process of having our bags checked, check in and then security. There was a slight hiccup with our flight and we ended up flying an hour late but it didn’t really interfere with anything. The flight was in two legs; half an hour to Guayaquil with a forty minute wait before the next leg which was an hour and a half to the airstrip on Isla Baltra. The flight was fine, a bit of turbulence leaving Quito but otherwise boring.

We arrived and after the security checks we waited for our bags. One person, Siobhan, had all the luggage tags and she had to go on her own to collect all of our bags. The guy waiting for us saw that we were waiting for Siobhan and motioned for us all to go and get the bags to speed things up so we did so and were soon with our temporary guide heading to a bus. We took the bus for a ten minute ride to a ferry, Baltra being a small island separated from the larger Isla Santa Cruz by a narrow straight, the Canal de Itabaca. The landscape was quite flat with very little vegetation, dry grass and low leafless trees and shrubs meaning everything was either brown or grey. We were visiting during the dry season so this was to be expected. It was sunny and warm and the waters of the straight were azure blue and very clear. Our boat for the next few days, GAP Adventurer IV, was currently moored at the bay of Puerto Ayora on the south side of Santa Cruz, so once the very short ferry ride was done we boarded another bus for the 45 minute trip to the Puerto Ayora town. 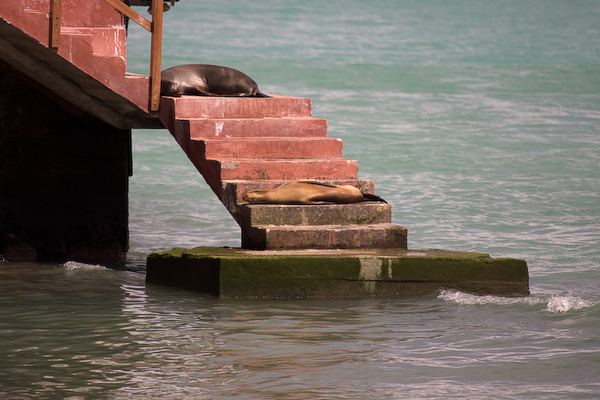 The bus dropped us off by the town dock and we waited for a small boat to come and ferry us out to the Adventurer IV. We saw our first real wildlife here; red crabs crawling over the rocks by the docks, small fish in the water and lazy sea lions sunning themselves of nearby steps that led down into the bay. The town itself was small but touristy, lots of souvenir shops, hotels, dive shops and bars. Our transport arrived and we were taken to our boat on an inflatable dingy which seemed to slide over the small swell of the bay. 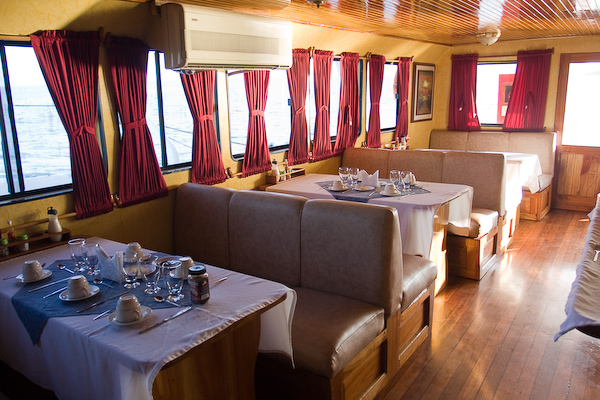 The dining area on the Adventurer IV

We entered the boat from the dive ramp on the back of the boat and walked up stairs to enter the dining area on the middle deck. First up we were assigned rooms before eating lunch. All of us got rooms on the lower deck, Keryn and I getting the only double bed in room three at the front of the boat. Our room was more spacious than I had been expecting; the bed was narrow for a double but OK and was on the left side of the room. The right side had a cushion covered bench and some cupboards that were perfect for storing our gear. At the end of the room was our bathroom, the emergency exit for the lower deck reached through our shower. We also had four small portholes, two on either side of the room near the ceiling, so we had a little natural light.

Back up a level we had the dining area and a common room. The dining t the back of the boat had three tables and bench seats against the right hand side, the kitchen taking the left. At the front the common area was lined on both side with padded benches with a television to the fore and a bar at the back left hand side. The next deck up, reached by stairs at the rear, and contained six loungers underneath an opaque plastic roof. There were more cabins on this deck and at the front the helm. One more set of stairs led to an open area at the top of the boat with more padded seating and also a small washing line strung up between hand rails and navigation equipment at the front. It was all very comfortable and spacious for us six, the boat ready for sixteen passengers.

After lunch of tasty pizza we were told to get ready to go back to shore. We still hadn’t met our naturalist and guide for the tour so figured this would be where we met him. At this time we also saw (rather than met) the other passengers we hadn’t known about; Jennifer and Frank (also from Dublin, Ireland) and lastly Eric from San Francisco. We never actually got properly introduced to the existing passengers, we all just got talking over the rest of the day. It turns out that GAP runs seven and ten day trips on the same boat; seven days equating to four nights on board, ten days equating to seven nights onboard. The groups overlap twice each week, a bunch of people ending one trip leaving some behind who are on a longer trip and then a few days later the same thing happening again, some departing, some staying a few more days and new people arriving for their four or seven nights onboard. It’s all very confusing.

So we went back to Puerto Ayora and finally met Wilo. He was very distracted and always on his cell phone. It transpired that he owns a different boat that is hired out on charter. That day he found out that his boat had taken on a lot of water the previous night and was almost sunk so he was dividing his time between the tour and getting the boat bailed out. We saw the half sunk boat later on, at least it didn’t look like it was going to sink when we saw it what with half a dozen people on boat bailing the water. As mentioned Wilo was distracted and he didn’t give us the best of first impressions as he led us to the Charles Darwin Research Station, we were all a little clueless as to what was going on. 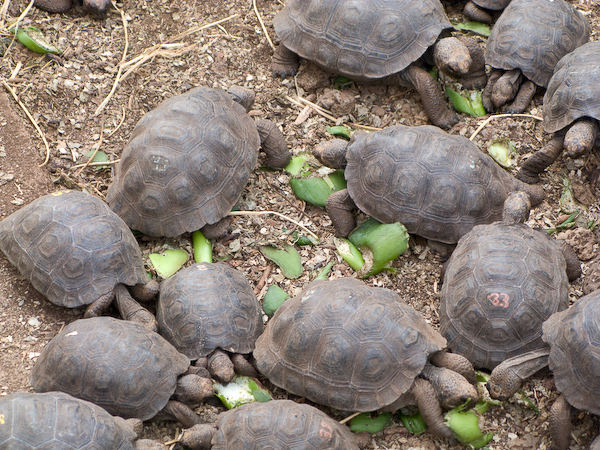 Baby giant tortoises get to know each other 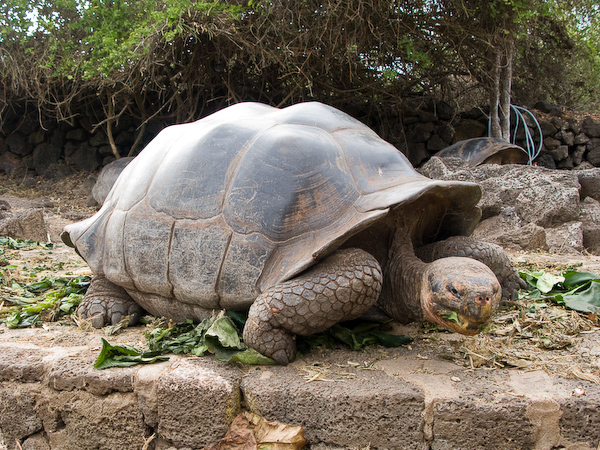 One of the older giant tortoises

It got better at the station, Wilo guiding us to various displays and enclosures. We learnt about the conservation efforts in place on the islands that make up the Galãpagos, learnt some more about the wildlife and saw conservation underway with a series of giant tortoise hatching enclosures. The survival rate of young tortoises in low, so in some places eggs are collected shortly after being laid and they are then taken to the research centre to be incubated. The hatched little tortoises are carefully raised and introduced to other tortoises over a few years before being released into the wild, boosting the population.

Further on we saw older giant tortoises, decades old and given to the centre after having been pets to locals. We were able to walk into the area with these huge animals and watch them from up close slowly moving around and eating. One in particular was reasonably active and took time to stare at us interested tourists in between trying to eat the vegetation before him. He was, we were told, around eighty years old and moved with slow, deliberate movements, looking at us with gummy eyes and drooling, sometimes blowing bubbles of spit. As with all animals in the Galãpagos we weren’t able to touch, only look and take photos (with no flash). There were also large land iguanas in a few more enclosures but they weren’t as interesting to us as the tortoises.

Other common animals were little finches and small lizards. All these animals were quite unafraid of the people walking by; they’d move away if we got too close but in many cases close meant inches away. We took in a visit to the enclosure of Lonesome Jim, the last of his variety of Giant Tortoise, but he was hiding in the thick vegetation. 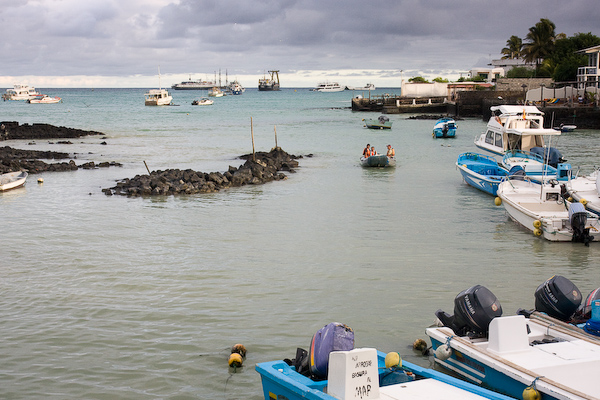 Looking out over the bay 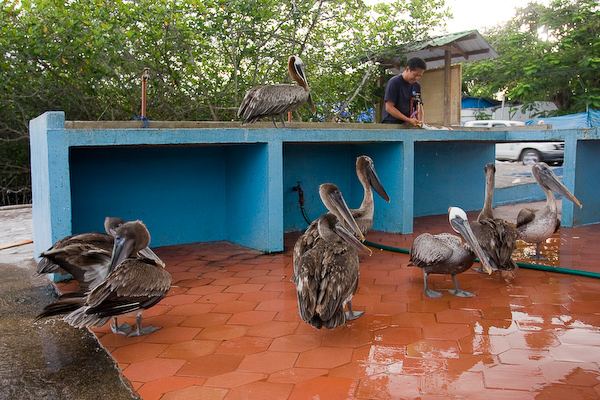 We had some free time and then walked back to town, stopping to look at the shops and having a drink and ice cream while talking with the Irish girls at a bar. Along the way we had stopped at the bay, seeing sea lions in the water, pelicans flying by and boats coming in. There was an outdoor area with benches set aside for fisherman to come in and gut their catch of the day. Pelicans hung around waiting for titbits to be thrown their way. We watched as one bold pelican sidled up along the bench before snatching a bit of fish gut beside the working fisherman. 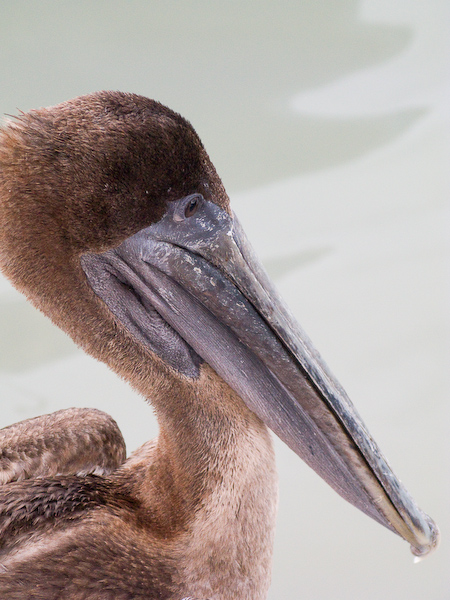 Close up on a pelican

We met with Wilo again at the dock and were transported one more out to the Adventurer IV. There was an introductory session, the group called together by the ringing of a small bell, and then a talk about the next days activities, followed up by a section of DVD covering some of what we’d be seeing. We had dinner which came in the form of a small buffet, lots of salad and different foods to choose from and all excellent. We got to know our fellow travellers a little bit while talking over our meals. Retiring to our room we got ready for bed and were sleeping fine until the boat started moving late at night. Also at the front of the boat was the anchor and the noise of it being raised was surprising loud and piercing; being wide awake after the unexpected noise we slept only fitfully as the boat travelled over the ocean swell and were further jolted awake when the journey ended early in the morning. All in all it was not the best sleep we’d ever experienced.