In the morning we were guided by Vanessa to a Panama hat factory. Panama hats are made in Ecuador, the name apparently comes from when the workers on the Panama Canal were all given the hats to wear as they worked and it has stuck ever since. We were shown the process of making the hats, starting with the raw materials which are harvested and dried, split into narrow strips and then sent to the city where the weaving happens. The tighter the weave and the thinner the strips used in the construction the more expensive the resultant hat. 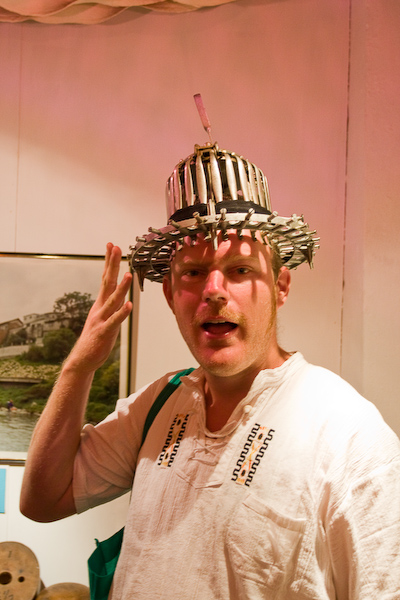 We saw older style moulds used in the weaving and the more modern varieties. We saw the press used to give shape to the hats and then had a look around the building; the rooftop views, the room where Sean and Melissa dressed up and posed for some photos, the cafe where those who drink coffee had the last good drink for a while. Then we got down to the business of choosing hats. 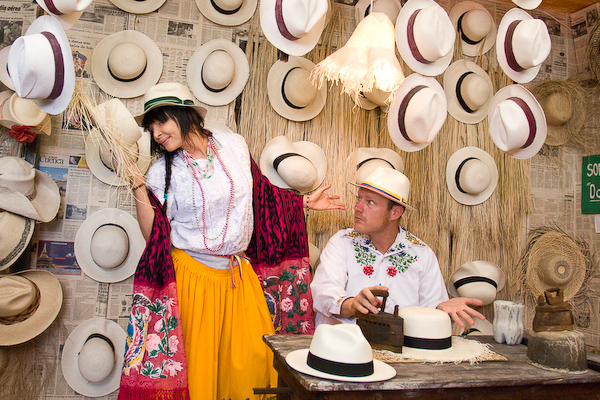 Melissa and Sean dressed up 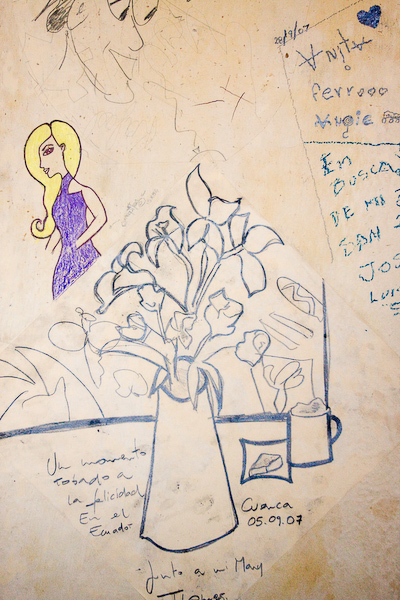 The walls of the cafe were covered with graffiti

Most people bought a hat. With my fat head I had to get one made as the selection in super fat size wasn’t too good. Sophie bought the most striking hat, an electric pink number. She looks like a kind of female Pete Dougherty (obviously better looking and not the dead beat he is). Leaving the shop we wandered in search of a Skelton Museum and there were a few photos taken of people with their hats as we walked the streets of Cuenca. 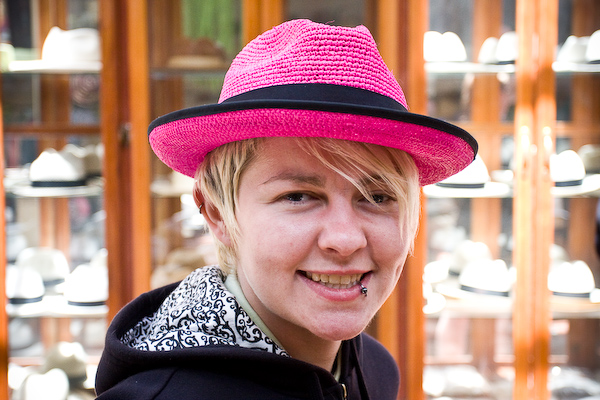 Sophie and her new hat 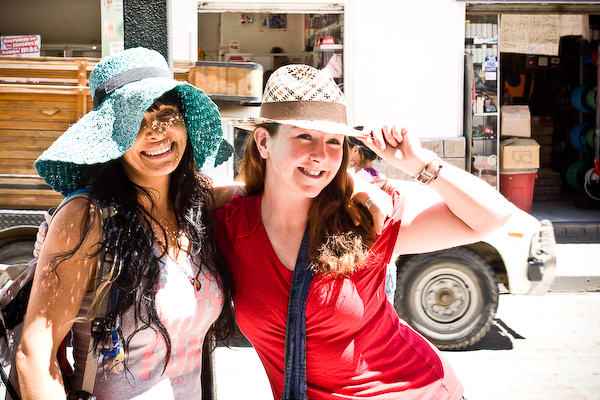 Melissa and Kerrie with their purchases

The day was again beautiful and the buildings of Cuenca looked lovely. The new Cathedral was very impressive, especially when framed with the colourful flags in the adjacent plaza. Later in the day walking past the same Cathedral the dark skies held a vibrant rainbow, providing more dramatic framing. The Skeleton museum was interesting but very small, only a couple of rooms. There were skeletons of various animals, mostly indigenous varieties such as a hummingbird, monkeys and wild cats like ocelots and jaguars. 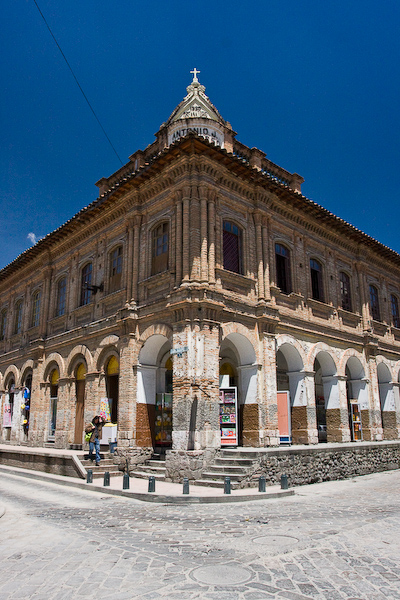 Just one of the hundreds of attractive buildings in Cuenca 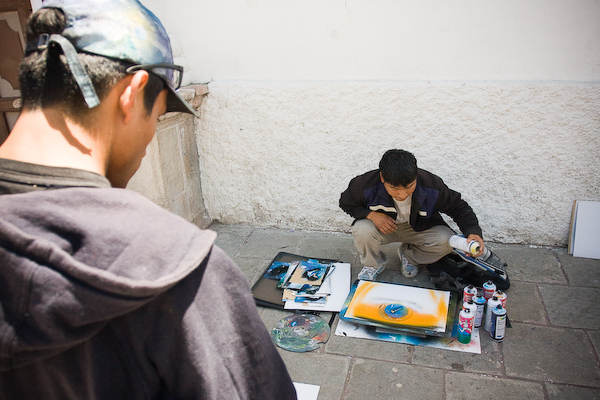 Art on the street 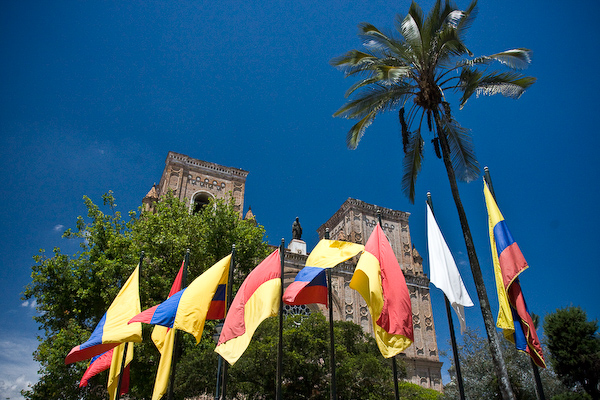 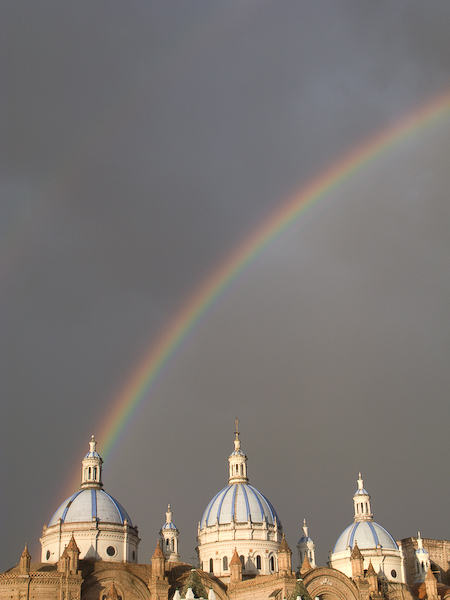 Later in the day with the rainbow 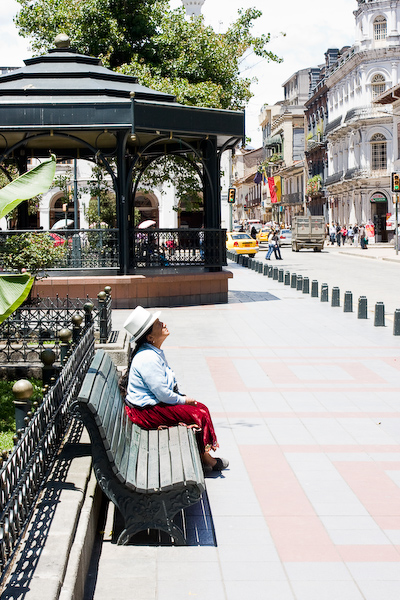 A local lady in the central plaza

We spent most of the day shopping in the end. We joined Melissa and Vanessa in travelling to a mall where we ended up not helping with the truck shopping. Heading back into town I bought a football jersey and Keryn bought a Panama hat for everyday use before we walked back to the factory shop where I got my hat (eventually) and Keryn bought a very nice hat which has been shipped to NZ with a few extra bits and pieces.

The whole group went out for dinner at an Argentinean steak house. I need to find more adjectives to describe a good meal, this one was scrumptious and I’m looking forward to Argentina. The night ended for us when we got back to the Hotel, tomorrow we leave Ecuador and head to Punta Sal on the Pacific coast of Peru.