We had to check out before 6am to ensure we got to the dive shop before 7am. Again we got the local bus and were a few minutes early for our trip. There were four other people out for the trip; two Mexican lads and a Mexican woman and her daughter who would have been about twelve I’m guessing. We were given a safety briefly and were told that we wouldn’t be able to touch the shark (unless it approached us of course). Then it was onto the boat and an hourâ€™s ride north to find the spot where the sharks are usually found.

Over the course of three hours we saw a dorsal fin of a dolphin, briefly two turtles and a few birds. Keryn also threw up; we were moving very slowly while searching for sharks and the swell was enough to give us a slow rocking as we moved over the waves. Unfortunately we didn’t see any sharks which was disappointing – we found out later on Cozumel that the chance of seeing whale sharks at this time of year was slim and this combined with a recent passing hurricane meant we really had no chance.

On our return to the dive shop we stopped for thirty minutes to snorkel for a while but this was done in a sandy area that was mostly devoid of fish but had a lot of grass and poor visibility. We had passed an idyllic looking island with a nice lighthouse and lots of birds diving in the shallow waters we were passing over. Keryn was told that one of each Mexican plant is taken to the island and itâ€™s a kind of sanctuary for flora. 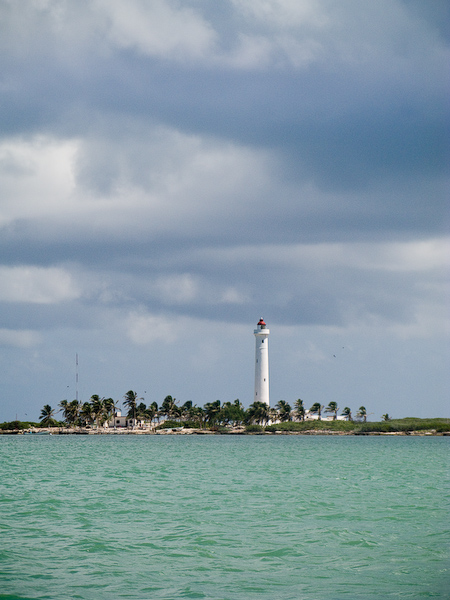 One of the only interesting things we saw

So, all in all disappointing and too date we haven’t received any sort of refund (though we’re trying). We rinsed off a bit, changed clothes and then headed back downtown to pick up our bags. We then took the bus back to Playa to catch up with the rest of the group who had departed earlier in the day.

Dinner was with some of the group in a very hot restaurant just down from the hotel. It may have been uncomfortably warm but the food was relatively cheap, came in good portions and was very tasty. Again we would be getting up early so we retired to the nicely cool room to get some rest.