Today we left Ecuador and entered Peru. The border crossing was different to any we had done before mainly because of the distance between border posts. Normally we would find ourselves at one passport control leaving a country then walking or driving through no mans land a short way to the passport control of the next country. Not so here. Instead we got our exit stamps for Ecuador and then drove half way through a large, messy, dusty town. At the bridge over the scum that masqueraded as a river we stopped and Rhys and Vanessa sorted out the border crossing for the truck. As well as being the middle of the town the bridge was also in the middle of a bustling market, we found ourselves watching various stalls and hundreds of people moving through the market and over the bridge. It was bizarre. The truck clearance took quite a while and required a bribe in the end; the truck passport has the colour listed as white but it has been painted blue since then. The official wasn’t going to let us pass until Vanessa said something like “Fine, we’ll camp here, go get some paint and put the colour back to white then”. The official didn’t like this and a small monetary exchange was made to clear up the differences in opinion. We then drove on to the Peruvian side of the town and pretty much out the other side before finding the Peruvian passport control.

The Peruvian landscape quickly became a lot drier and sandier than what we had seen so far in Ecuador. We were approaching the Pacific Ocean and most of this coast is desert. It was late afternoon when we turned off the main road towards the small village of Punta Sal. Our accommodation was the Hua Hostal, a small place with a restaurant right on the Punta Sal beach. We pulled up to find another Kumuka truck already parked next to the hostel, this group coming north. The other Kumuka group was, other than the driver and guide, consisting of twelve women with ten of them coming from Ireland and the other two from Australia.

We pitched tents on the sand next to the hostal with our entrances pointing towards the ocean. The hostal was providing dinner so relaxed before dinner came out; a nice combination of chicken and seafood platters with chips. A campfire was started on the beach and we all sat around drinking and talking. It took a bit of persuasion to get the other group to come join us but before long a number of them were mingling and we were getting to know each other and finding out what we had in store over the coming weeks. Danny got to know one of the girls really well, one day I’ll write about the rules and procedures surrounding cross truck drilling rights, but not now I think. 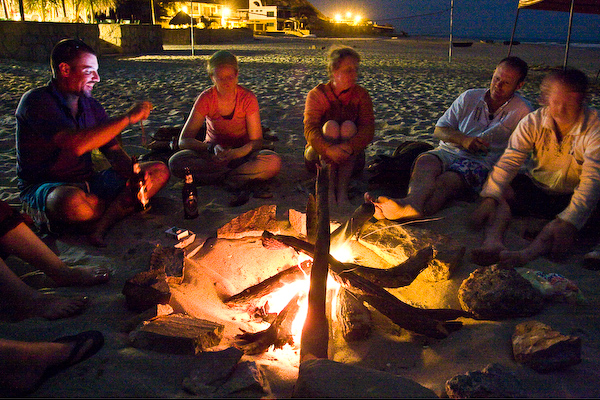 Around the campfire at Punta Sal 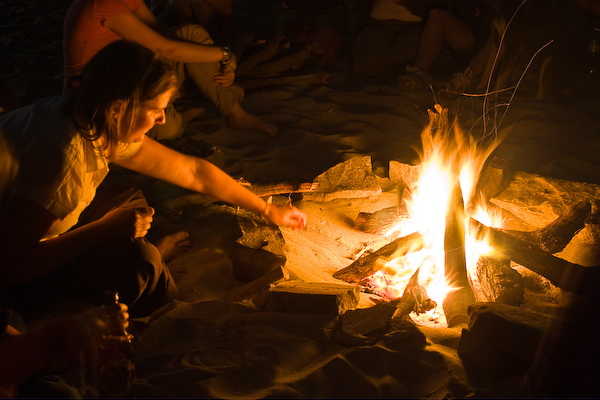