A bus arrived this morning to transport us through a tour of the Sacred Valley. Our first stop was the Inka site of Sacsayhuaman perched on a hill overlooking Cusco. Our guide Martine sat us down in the wide grassy space between two hill tops and explained about the supposed history of the site. The stones that made up many of the walls and structures of Sacsayhuaman had over the years been pillaged and used in the construction of buildings in Cusco so now the only remaining pieces are those that were too large to move; the cyclopean walls. The largest stones weigh upwards of seventy tonnes and the offset walls make for impressive viewing. 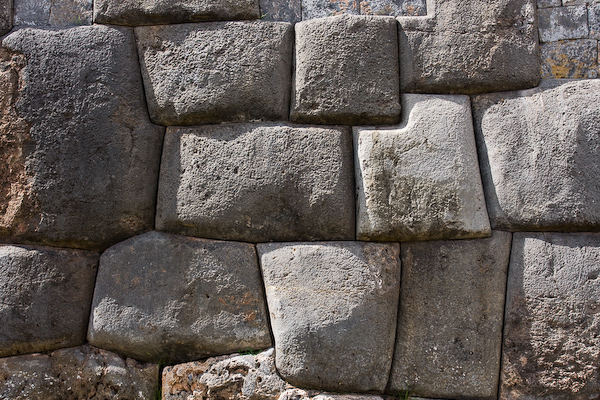 A section of the mortar-less wall 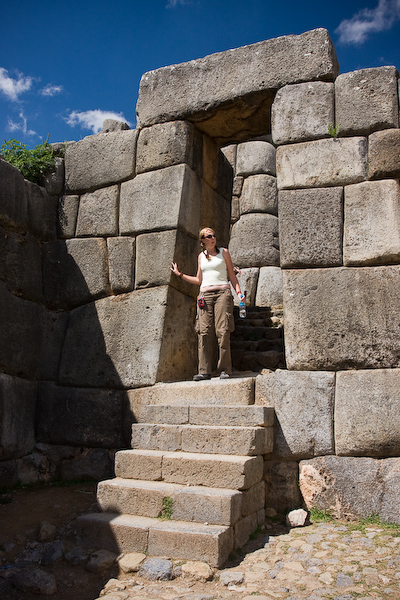 Kelly walks through one of the remaining intact gates 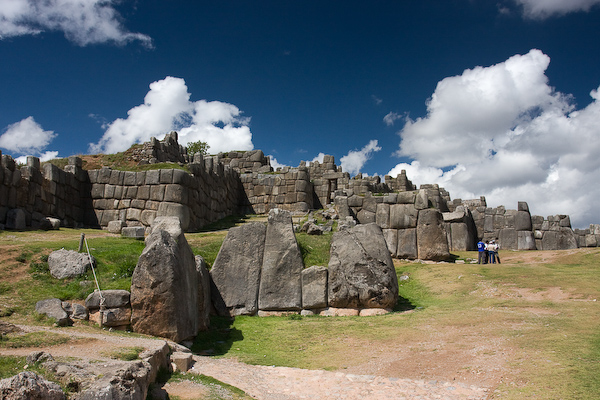 Some of the remaining walls

We had free time to climb up the hill and look over the city of Cusco before walking down to the car park where the bus was parked. There were a few market stalls selling touristy things and a few tiny Peruvian women walking around in traditional clothing leading their llamas around and touting for photographs. I took a few photos, paying a sole each time, and then we were off further into the Sacred Valley. 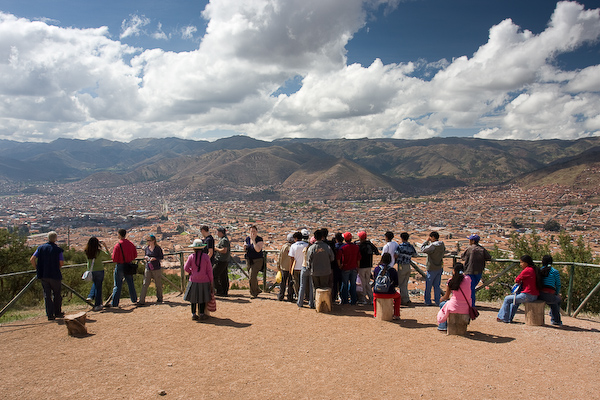 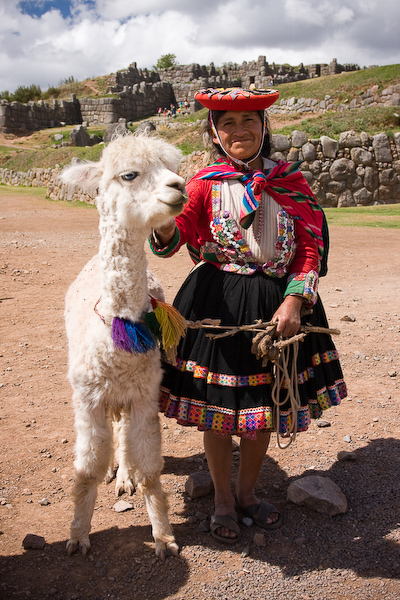 A woman with her llama

The next destination was the small town of Pisac, set in the valley beneath the steeply rising slopes of the surrounding mountains. We arrived mid morning before there were many people and had a pleasant hour walking around the interesting market. The sellers were generally friendly and not pushy and the quality of goods was excellent. As a thank you surprise a richly coloured rug was bought for Vanessa and it was very graciously received later on. Keryn liked the rug quite a lot but failed to find its equal on a return visit a few days later with Michelle. I found a t-shirt store I liked on the outskirts of the square where the market was located but the shirt I liked wasn’t available in my size; more dieting required perhaps. Upstairs was a funky cafe, devoid of people this early in the day, and I had a nice lemonada to sip on as I looked over the square from the little balcony. 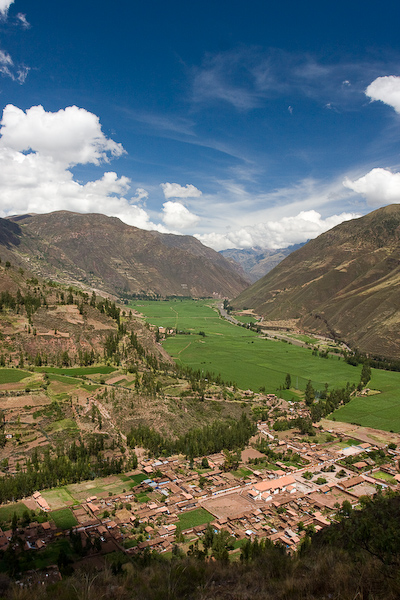 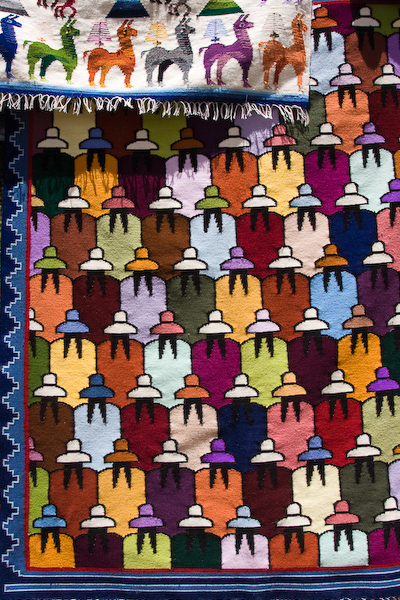 Colour in the Pisac market 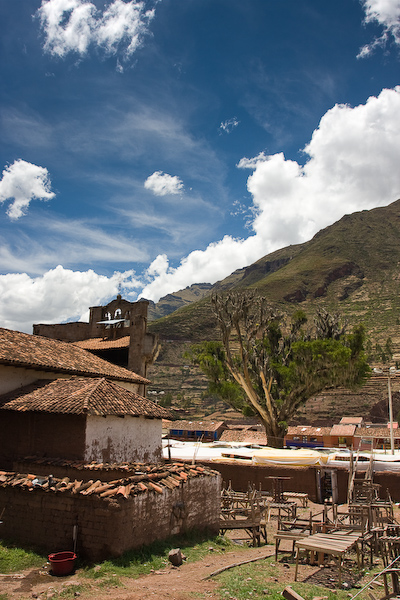 Looking to the ancient tree at the center of the market 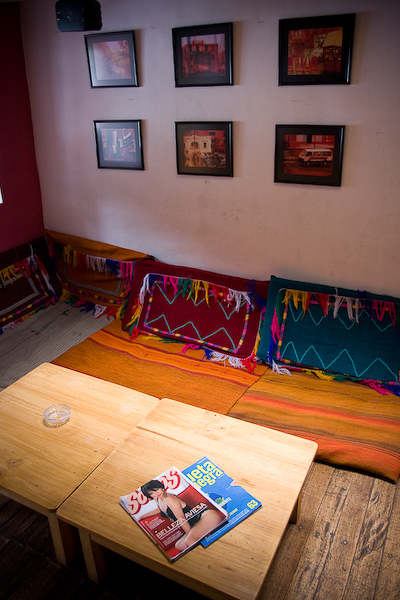 With shopping complete we drove up the mountain road to the ruins of the Inka city that give Pisac its name. Set on the steep upper slopes the site was amazing, I’m sure on a morning with mist in the valley and the golden glow of morning light it must be a magical place. Large, steep terraces curved up the mountain side to culminate in temples and buildings on the peak. The 360 degree view at the top took in the surrounding valleys and mountains. We walked along a cliff-side path and through a tunnel constructed by the Inka before coming out at the main temple structure. Keryn was in quite a bit of pain at this point and Vanessa organised for her to see a Doctor when she got back to Cusco that evening. 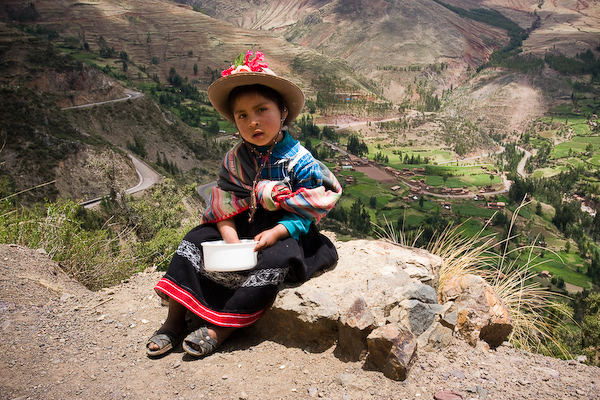 This young girl was at the entrance to the Pisac ruins 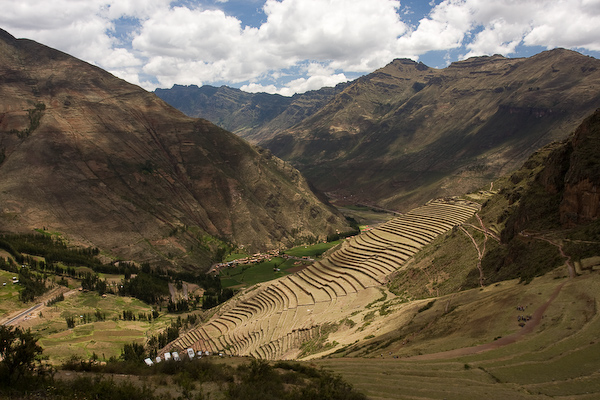 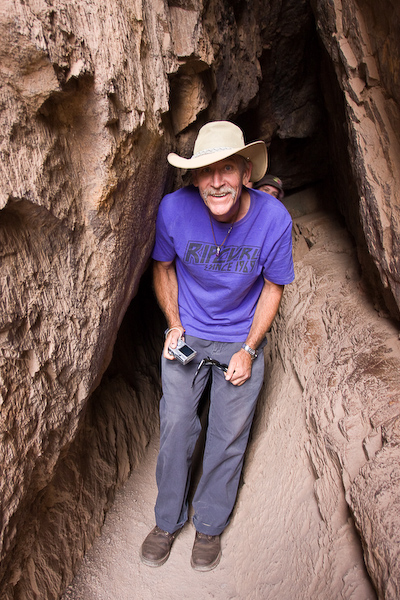 Albert walks through the Inka tunnel 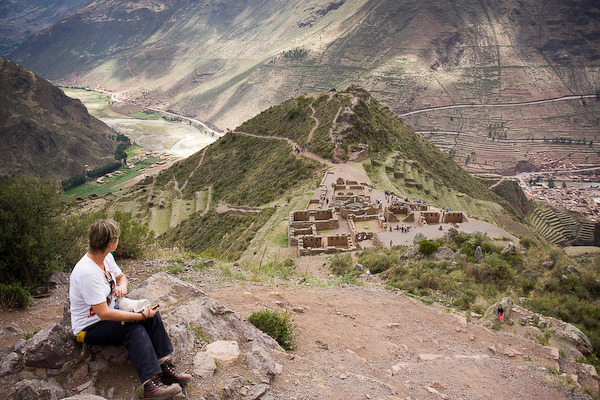 Angie looks over the temple complex

Back in the bus Danny was taking a turn on the tour leaders microphone and got the tour leaders daughter Bridget to great everyone as they got onto the vehicle. When everyone was there we set off for the next Inka site at Ollantaytambo known as The Fortress, stopping for lunch at Urubamba. This was another impressive terraced area on the side of a mountain set in a valley with larger mountains in every direction. Walking up the stairs to the top took quite a bit of effort, just as well we spent a long while at the top listening to Martine tell us about the area and describing the construction of the site. The stone used at Ollantaytambo was actually mined miles away and transported in prepared form, large stones pushed along on logs up long, shallow ramps. 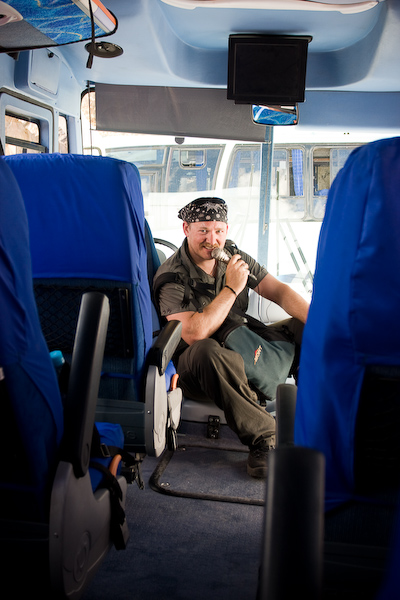 Danny on the bus 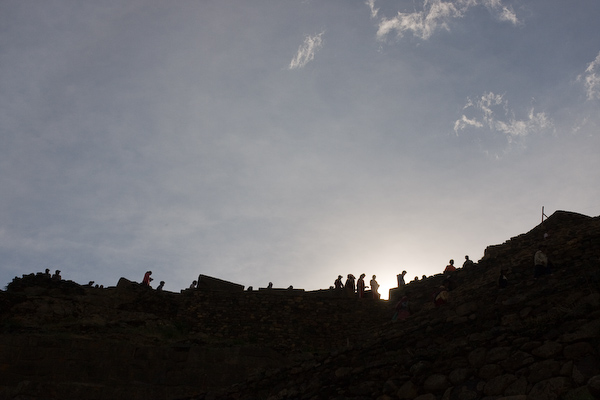 Silhouette at The Fortress 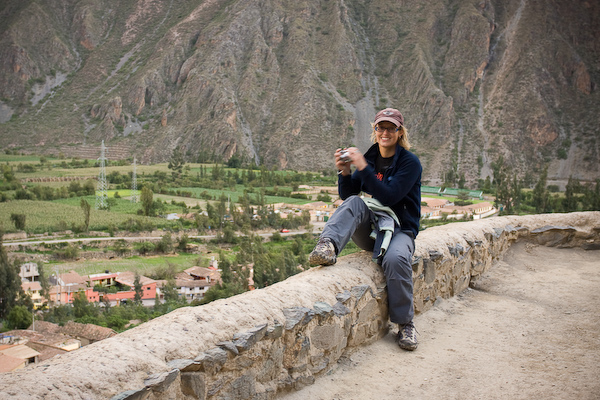 Vanessa looks over the valley 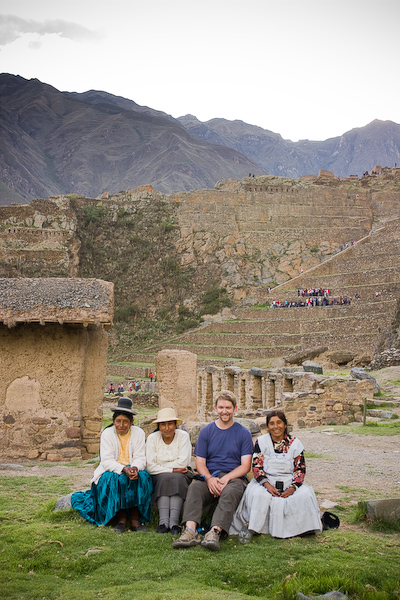 Brendon poses with The Fortress as a backdrop

Melissa talked to some local woman at the bottom of the site and she and I ended up having photos with them, I look like a giant next to the little ladies. When we were done it was a short last journey through the adjacent town of Ollantaytambo to a hostal where those of us doing the Inka Trail would be staying for the night. Kerry and Erika were doing the alternative Lares trail and were leaving from Cusco the next morning so they joined Keryn in travelling back to Cusco leaving us to say our goodbyes and then settle into our rooms.

Ollantaytambo is a quaint old town, all cobbled streets and old stone buildings. It was commented a few times that it was like being in a movie set for some film set in the distant past. We ate at a small restaurant on the town square and then went to bed early, packed and ready for the walk starting the next day.