Today we took a tour of the area around Granada, taking in a number of different towns and places along the way. We had breakfast at a waffle restaurant up near the Convento de San Francisco, joining Cecylia at her table. We all walked back to the tour office and joined up with the others coming out for the day. With guide and driver we set out and headed towards the nearby Pueblos Blancos (white villages), so named because the walls of the buildings were often given a simple lime render that made most of the town a simple white colour.

The first town was Catarina, known for its pottery production. At a local house we were shown the steps to make a piece of pottery from kneading the clay through to decoration and firing. The whole process was very manual, the pottery wheel turning under foot power, each piece hand crafted. Most of the tools used were natural as well, stones and wood for the most part used for smoothing and polishing. Aaron had a go on the potters wheel and with some help managed to get a somewhat respectful looking pot at the end. Unfortunately it takes about twenty days from shaping to final product so there was no chance to get anything to take away from his efforts. A few people bought items from the simple shop and then we left for our next stop. 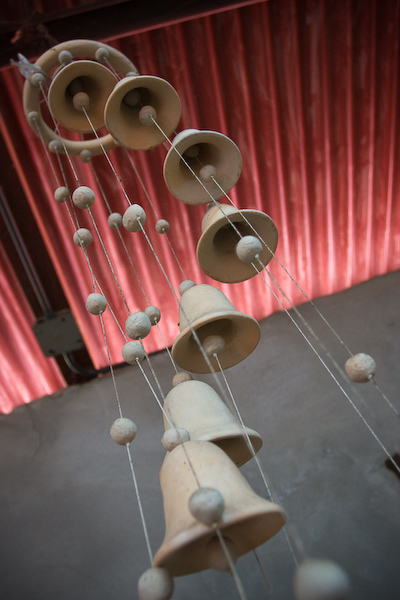 Pottery chimes were one of the more interesting pieces on display 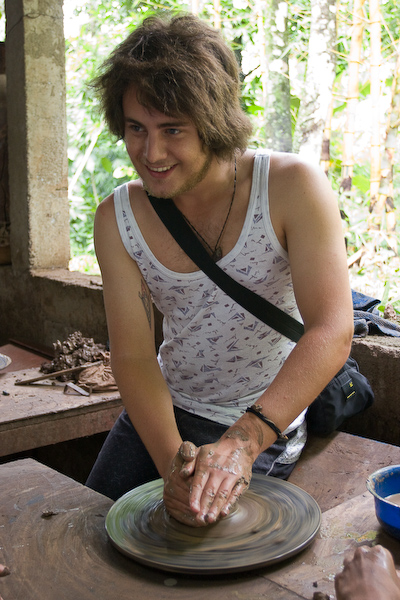 Aaron at the wheel

At San Juan Oriente we had a short walk through the main street, seeing bullet holes riddling the side of a building, evidence of the unsettled recent history of the area. This town was a center for plants, many houses having small nurseries with the plants displayed for sale on the roadside. We walked past a number of these little shop fronts and our guide pointed out some of the more interesting plants. A very short van ride then took us up to a viewpoint looking over Laguna de Apoyo. As we stood admiring the view a rain band came across which sent us all back to the van for cover. 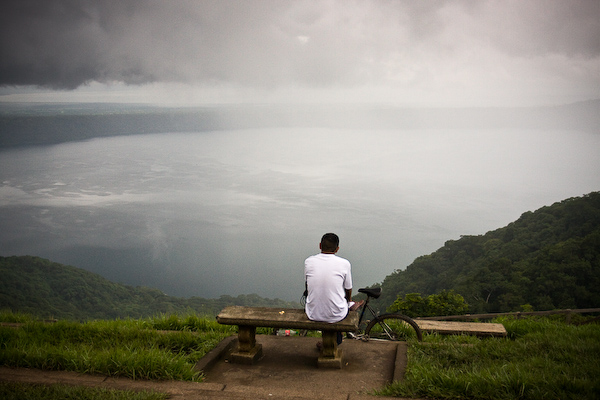 The view over Laguna de Apoyo

We drove down to the lake and had an hour or so of relaxing in hammocks, having a cool drink, a bite to eat and of course swimming in the lake. It was good, more so when the sun came out – for some this was the first chance they had had in a long time to rest in the sunlight. All good things must end and we drove back up the road, stopping briefly at another lookout as we hadn’t had a good chance to look out over the lake towards Granada and Lago de Nicaragua. Moving on the next destination was Masaya and a lunch stop at the Mercado Nacional de Artesania. After eating we had time to wander through the market but didn’t buy much, it was all a little too tourist orientated for us market snobs. 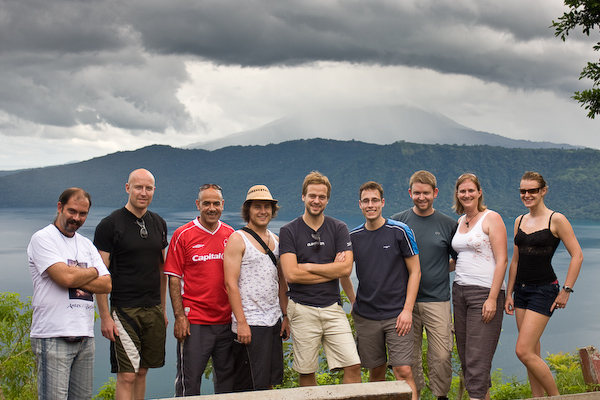 A group photo at the second lookout. From the left: Josh, Andreas, Richard, Aaron, Peter, Stefan, Brendon, Keryn and Cecylia 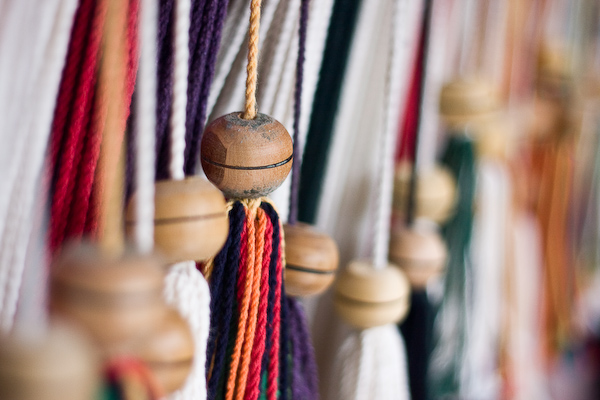 We had a stop at a supermarket to buy snacks for the coming days of travel and Ometepe where we would be isolated from shops and then headed out to the Coyotepe Prison. The prison, last used about twenty years previous, was situated on a hill outside of Masaya. In its day the prison was used to house political dissidents with torture a common place undertaking in the seeking of confessions. A bleak place was somewhat turned on its head when we arrived at the gate to find dozens of school-kids in attendance, running around, playing and generally making noises not associated with the site of a prison. 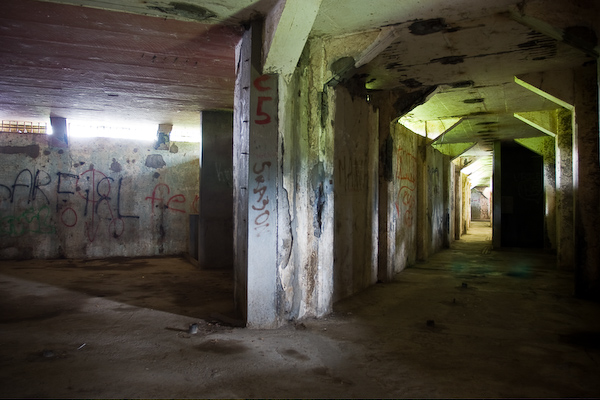 The first level of the Coyotepe Prison 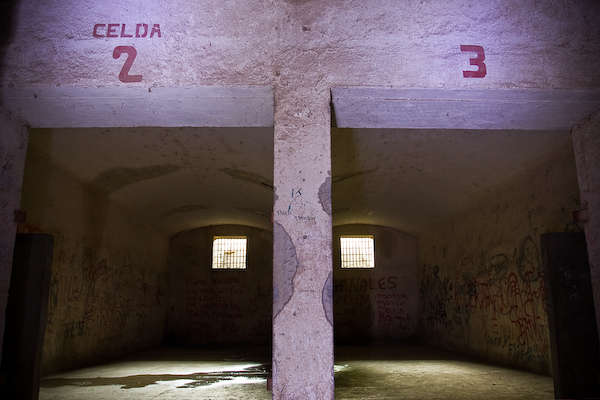 Down to the second level 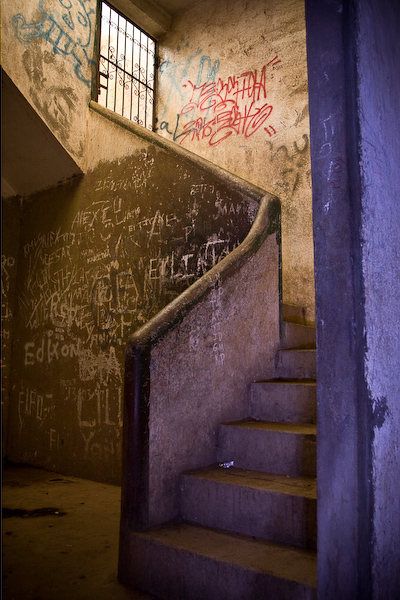 Stairs to the surface

We walked up to one of the small towers on the prison walls and climbed up to look over the surrounding countryside. In the distance we could see Volcán Masaya, out next destination, sending clouds of smoke and gases along the horizon. Climbing down we headed for one of the entrances to the prison, the cells set on three levels underground. For the next hour or so we wandered the first and second levels. Most of the cells had been ripped out but we could see the small areas where the prisoners had been kept. The first level had some light from windows in the concrete walls but was also home to bats, wolf spiders and scorpions. The second level was much darker, little to no natural light and strangely no insects that we could see. Turning off our lights in one small second level room we were left in total blackness and could try to imagine for a moment what it may have been like for the prisoners crammed into this room and left for months at a time. The prison was a disquieting place, the guidesâ€™ descriptions adding uneasy colour to the drab surroundings. There is a third level, deeper underground, which we were not able to visit. It must be a terrible place. 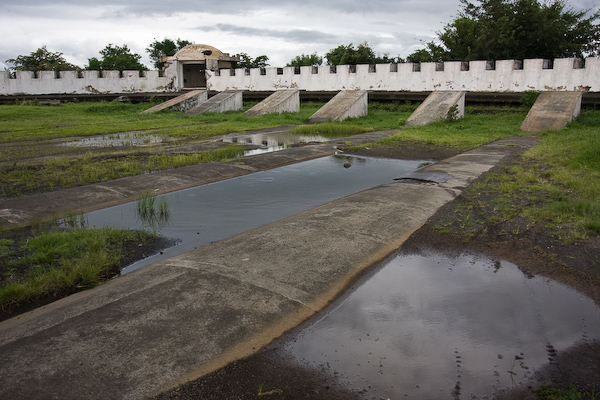 Back at the top

Leaving the prison as the light was beginning to fail we drove to the park that holds the Volcán Masaya, one of the few active volcanoes in Central America. Here we were hoping to be able to see the glowing lava still alive several kilometres down the crater. This appeared to be an unlikely possibility, we arrived to the car park adjacent to the crater to find huge volumes of gas and smoke pumping out of the cavity. Overhead a small flock of parrots flew by and then down into the crater, apparently they nest in the crater walls much to the perplexity of scientists what with the high toxicity levels. We had a gas mask each to help us with the fumes (though the masks themselves didn’t seem that effective, gaps and ill fit making them more of a psychological comfort than anything else). 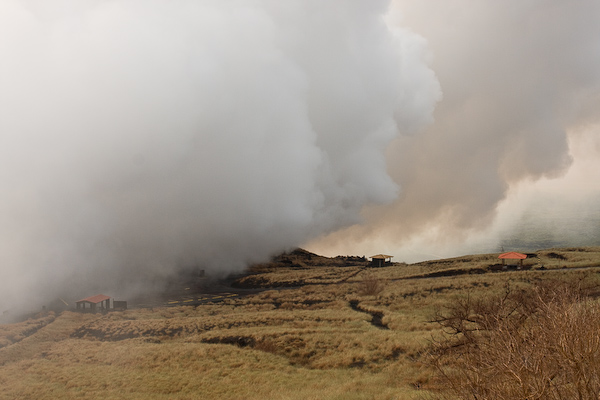 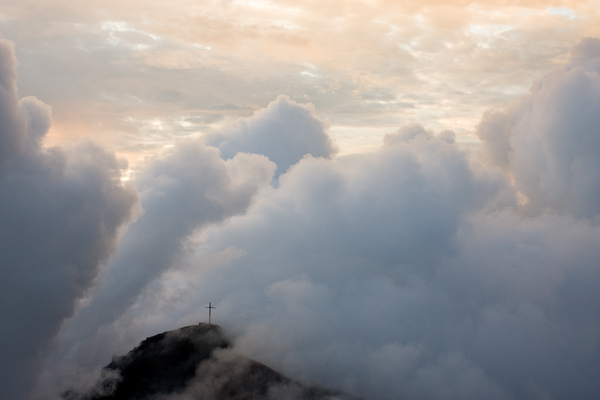 The Spanish Cross and the sunset

The wind changed and the gas cloud started towards the car park so we were driven up to a higher viewpoint where the local guide started out tour. There were a few other groups in attendance and together we followed the guide up a path to a lookout over an older, dormant crater. In the near distance a rainbow was straddling the sky and this coupled with the clouds and evening light gave the place a dramatic presence. Below we could see jungle covering much of the crater floor and the sounds of the evening, crickets and other insects, were starting. The sun started to set over the active crater, edging the clouds with yellow and peach colours while the guide told us about the area. The rain of the last few days meant that the clouds had more volume than usual and this coupled with the prevailing wind direction meant we couldn’t take the usual walk up to the Spanish cross on the far side of the active crater so we just had to catch glimpses of it though the swirling clouds below. 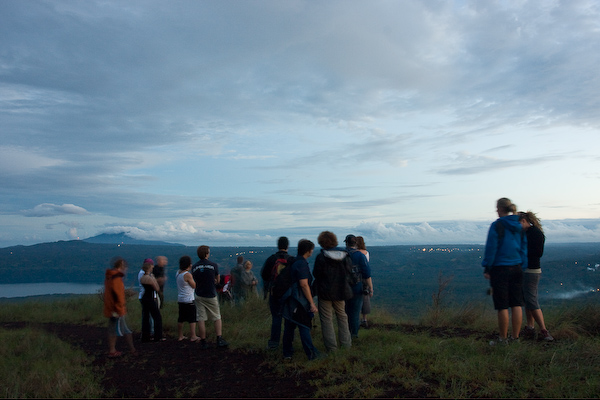 Walking along the dormant crater rim we took a low path and headed to the far side of the volcano where we could see out to Laguna de Apoyo and beyond. We were denied the chance to go to the highest point for a better view, the rain again the culprit with the higher ground wet and safety an issue with the volume of people present. Back along the path to the vehicles we took a short drive down onto the lower reaches of the active volcano and were all kitted out with torches so we could visit a couple of caves. At the first cave we could see (just) hundreds of bats flying out into the night. When the lights were turned off the soft whooshing of the bats could be heard all around and photos could be taken with a bit of luck, the camera aimed in the general direction of the cave and fingers crossed that the flash would catch the bats in flight. The second cave was an old lava tube, circular and heading several hundred meters underground. The walls were formed of melted rock and above us had a strange texture, smooth and formed like a rocky version of melting ice. 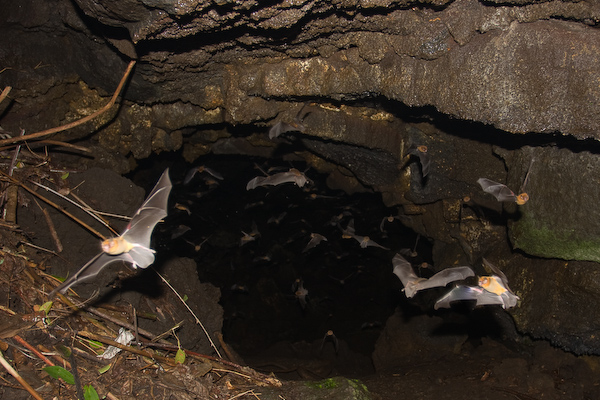 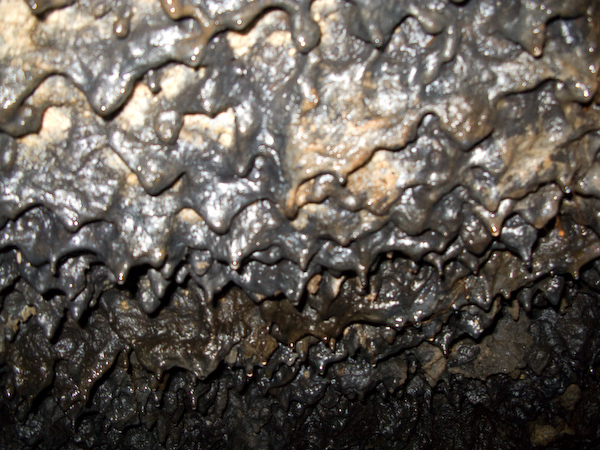 The walls of the lava tube

One more ride and we came to the edge of the crater, this time with the wind pushing the gases away so we could get to the edge. The volume of gas meant there was no chance of seeing any devil glow below but it was still interesting leaning over the edge and staring into the whiteness. That was the end of our tour so we headed back to Granada where we had dinner at the local Irish pub. A long day had us more tired than usual so we then found our way to our room for a well earned rest.