The travel today would take us to the island of Ometepe situated on Lago de Nicaragua. Taxis were used to get us to the local bus depot and from here we caught a chicken bus for the hour or so ride down to San Jorge on the lake shore. The bus ride wasn’t too bad but Keryn had to get up in the end out of her seat, the cramped room too much for her knee and back to cope with. We waited at the ferry terminal in San Jorge and boarded once the arriving people had disembarked.

The ferry was large and we sat inside, the rain starting up as we headed to the island. The journey took about an hour and the lake was quite flat so there was no discomfort. The screens inside the ferry played a video obviously aimed at the high end American tourist market with a pretty bus vacuous girl and her young but chirpy boy companion visiting some of the more upmarket holiday destinations in Nicaragua. It was something to watch but the in your face marketing got somewhat annoying.

The town of Moyogalpa was covered in a light rain as we came in to dock, the two volcanoes that gave birth to the island hidden in the mist. We were driven in two vans from the dock heading for the hotel which was situated on the strip of land between the two Volcanoes, stopping once to walk over a large mud slip that covered the road and a couple more times the vans having to take diversions around further slips. After forty minutes of muddy and pot holed dirt roads (and the occasional tarmac) we arrived at our hotel which was itself recovering from the rain, the reception area partially under a thin pool of water. 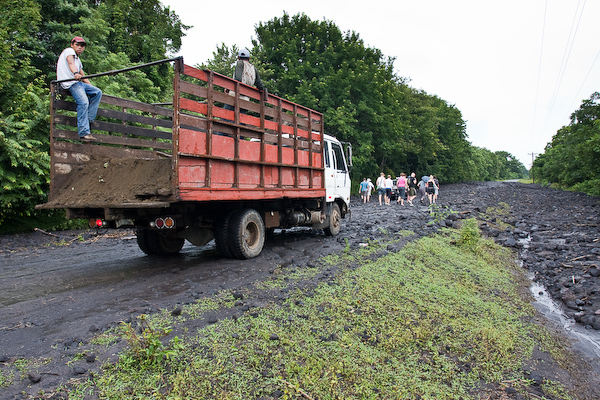 Walking over the slip 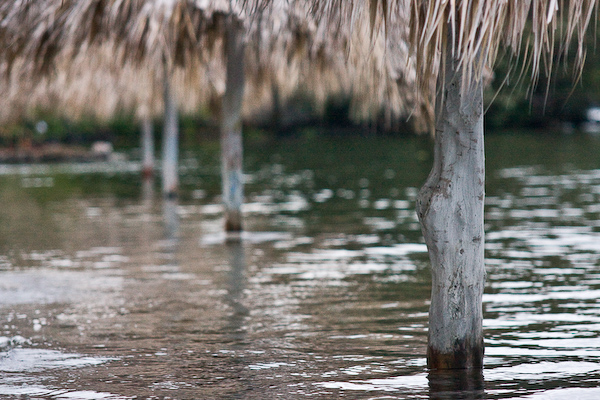 Our room was upstairs and was comfortable enough. We spent the afternoon relaxing and wandering around the hotel grounds. The hotel was right next to the lake, the level obviously high with waterside fixed umbrellas immersed in the water, the beach much narrower than usual. A few went out for a swim and I watched the refection of sunset on the distant clouds, our view east. After dinner we went next door to a small bar where Angie was enthusiastically dancing salsa with anyone who would partner her. We sat and talked and finishing our drinks rose to say goodbye to Claire and Jenny. They had decided to leave the group and join with Jim and Sam in heading to the coast and then down into Costa Rica on a different route than the GAP one. After the goodbyes it was back to the hotel to retire for the night.