Keryn and I had signed up for a busy day of activities and this started with an early morning guided cloud forest walk. The taxi picked us all up (we were joined by Pat and Miriam) at 7am and whisked us to the Reserva Biológica Boqu Nuboso Monteverde which is a private reserve which protects one of the last sizeable areas of primary (i.e. never been forested) cloud forest in Costa Rica. After buying our tickets and watching some short videos on the area and the work being done we joined with our guide and a couple from San Francisco for the walk.

Our supremely knowledgeable guide first took us to the nearby hummingbird garden, a building with a number of hummingbird feeders hanging from rafters and trees. We probably saw a dozen of the little birds zooming in and hovering to extract sugar syrup from the feeders and our guide gave us lots of information while indentifying each different variety as it appeared. We probably could have spent all day just watching the hummingbirds come in, fight amongst themselves and feed but we only had so much time so it was down towards the trails, only stopping to look at an orange kneed tarantula residing in a hole next to the path. 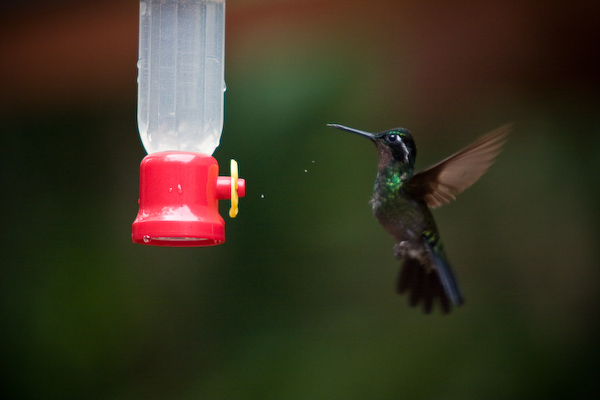 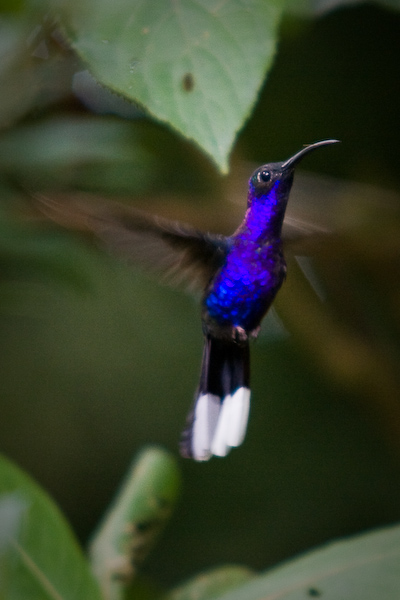 You can never have enough hummingbird photos 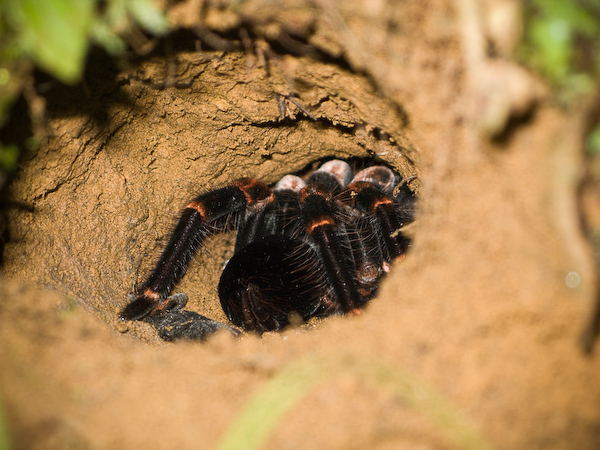 We started in secondary forest that had grown back from being forested in the 1970’s by the Quakers who colonised this area. There weren’t too many really big trees but it still looked lush and full of life. Our slow walk saw us stopping regularly and our guide would listen to the sounds of the forest and point out the various bird species we could see. The cloud forest gets a lot of the required moisture from the air, the average rainfall is ten metres in total with four metres from rain and the remaining six metres coming from the moisture in the air, the direct cloud contact. We had come on a rare dry day, most of our walk took place in cool but dry conditions. 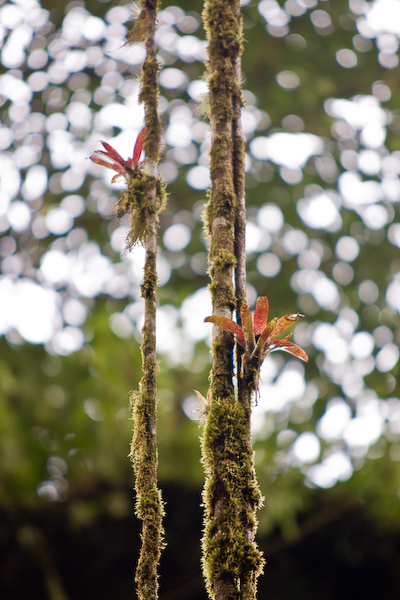 Bromeliads cling to roots in the cloud forest 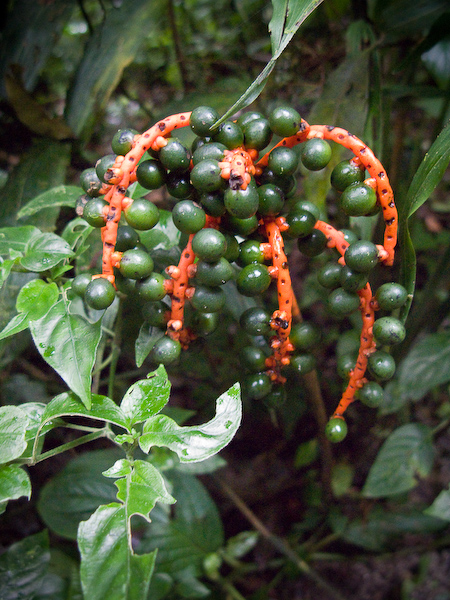 When we got to the primary forest it was noticeable that there were much bigger trees and the undergrowth was thicker, and there was more variety in the vegetation. We saw only birds in terms of animal life, the most impressive a relative of the much sought after Quetzal (though I’ve forgotten the name and don’t have a guidebook to hand). We visited a canopy bridge, suspended through a valley and giving us an eye level view of the tree tops. While on the bridge the cloud descended, coming down and dissipating twice before finally settling and turning the view into shades of white and grey. 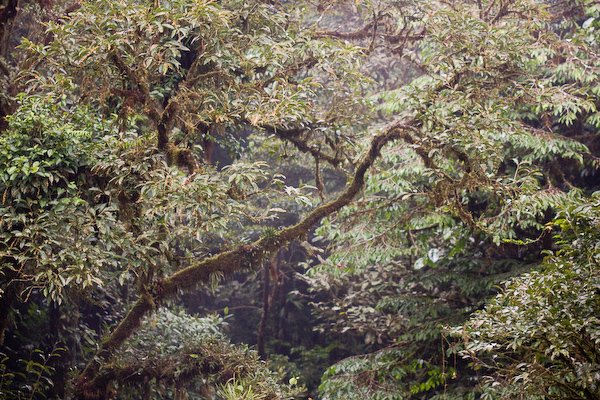 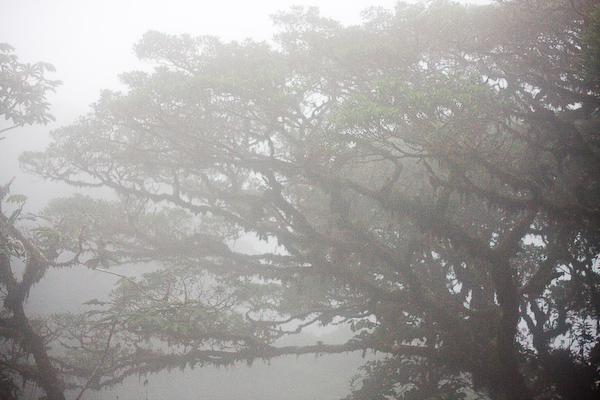 The clouds come down 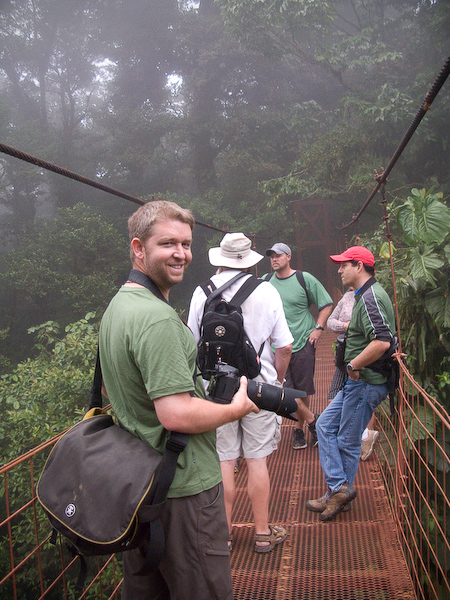 We walked back to the reserve entrance and had a look at the shop. We bought a few things and then had to go, our return taxi having arrived. Back in Santa Elena we got our washing and bought lunch from a wonderful little bakery, eating when we got back to the hotel. Our next activity was zip lining and he group was picked up at 12:30pm to go to Salvatoura.

Zip lining is a more professional version of a flying fox, wires strung between two points and the attached person travels from A to B at a high speed. Salvatoura is one of many zip line companies in the Monteverde region but the only company with lines set in primary cloud forest. After paying at the reception we all signed our lives away and then got kitted out in our harnesses. We were driven to the start of the course, eleven lines of various lengths strung between trees in the forest, and were given our safety briefing. The four guides for our group were professional but funny and soon enough we were queuing on the stairs up to the first platform. There was another group ahead of us and we waited as they all set off one by one. Each person has a grooved wheel attached to their harness and this is placed onto the zip line with a carabineer also clipped on as a safety backup. Suspended the zip liner then travels down the line with knees up and legs crossed, one hand on the rope connecting wheel and harness and the other hand with thumb and finger touching, circling around the line (like an OK sign). We had gloves on that had a piece of heavy leather across the palm. This leather was to aid slowing down which was accomplished by gripping the line, nice and simple. Most of the time we only had to slow down when indicated by the guide on the fast approaching end platform. 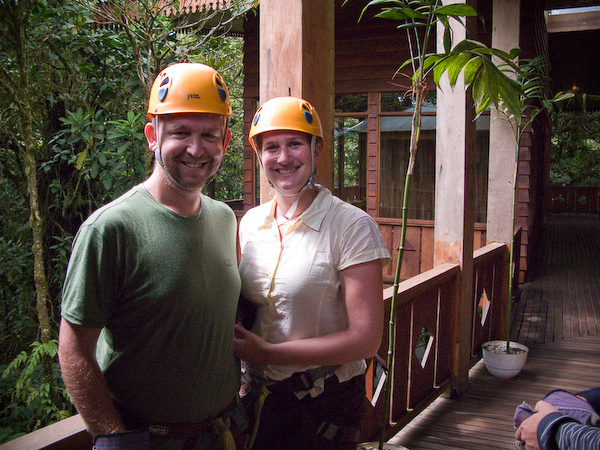 Keryn and I kitted out for zip lining

So starting with Stefan we all went down the first line. It was immense fun, flying through the canopy interesting and exciting at the same time. Sometimes we would all be together on a platform waiting for people to clear off the next line or waiting for our guides to come through from behind. The group ahead spilt off to a different line at some point and from there we proceeded quicker, every now and again arriving at a platform only to be quickly unattached and then reattached to another line for a fast onward journey. The longest line was 750 metres long and flew high over the forest below, exhilarating stuff. 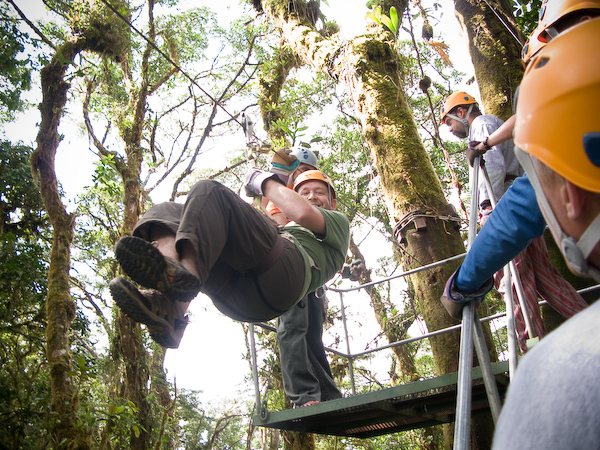 Ready to go down the first line

We had one big break from the lines and that was so we could have a go on the Tarzan swing. A platform had been erected and a rope suspended from the branches of an immense tree ahead. One of the guides connected the harness to the rope while a gate kept the person from falling forward. Once all hooked up the gate was opened and the lucky person was pulled forward, falling for twenty feet or so before the tension on the rope swung them forward on the swing. It was terrifying. I watched Pat go before me, a mighty yell as he was pulled from the platform, and wondered what the hell I was doing. Thankfully only the first drop was horrible, after that it was fun swinging back and forth, at least until the two guides below started pulling on my legs to stop me. Once those that wanted to swing had done so it was on to the next set of lines. 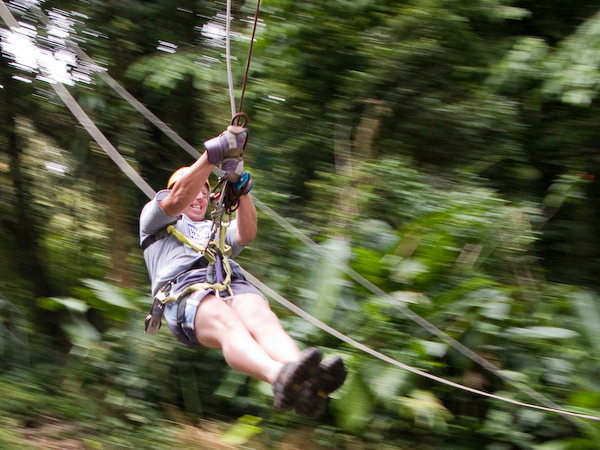 Matt on the Tarzan swing 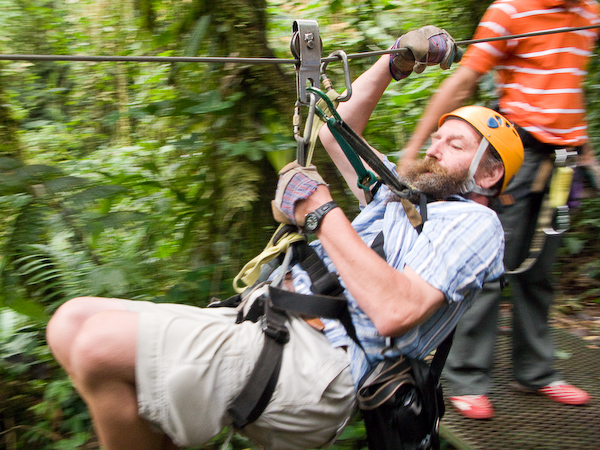 Pat on the zip line

It was all over so very quickly but had been very enjoyable, everyone wanted to go back and do it all again. Regular shuttles ran from the site so we caught the first one and headed back to the hotel for more rest before our final activity which was a night walk in the jungle.

There were four of us for the night walk being Keryn and I, Cecylia and Matt. We had a taxi waiting for us at 5:30pm and we arrived at the site office as sunset began. In the end there were eight people plus the guide, one American couple from Georgia (on their honeymoon, as were the American couple on the morning walk) and another couple who didn’t really talk to anyone. Our guide was young and while knowledgeable seemed a bit disorganised and not as confident as the morning guide. 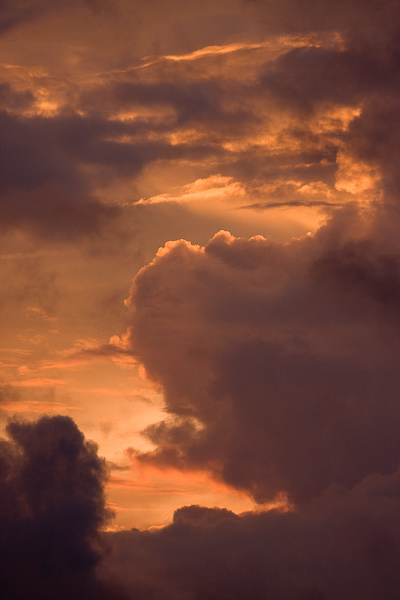 The orange sunset through the clouds

The walk started well, a number of coati being spotted running back and forth on the trail ahead of us. They were incredibly noisy and loud which was probably the reason we didn’t see much else on our walk, they scared everything off. We did see two more tarantulas which were coaxed out of their tunnels, they were very impressive. Other than that there was the odd insect and not a lot else other than a period of heavy rain. It was a pity that we had a disappointing end to the day but you can’t negotiate sightings with nature. The rain did stop before we got back to the office at the entrance and we saw an aptly named giant toad hopping away off the path. 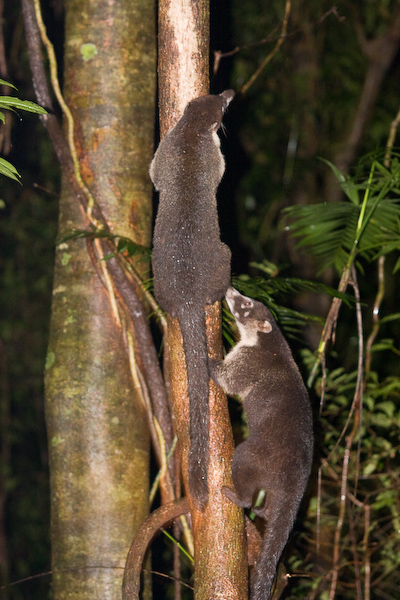 Coati climbing a tree after crossing the path 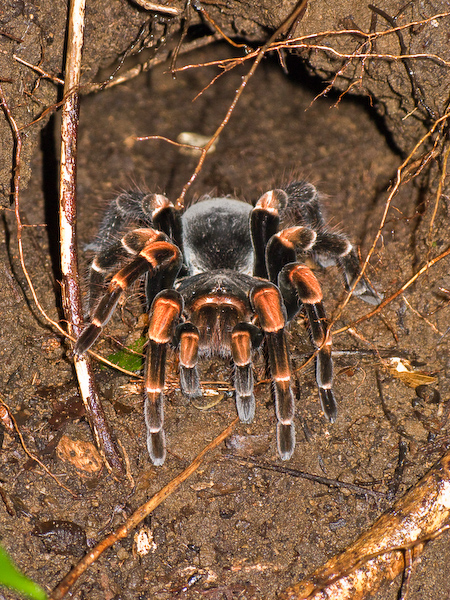 One of the tarantula

Back in Santa Elena we went to the same restaurant as the previous night and found the rest of the group. Dinner was eaten and then we decided to get some sleep rather than go out any longer.