It was time to leave Nicaragua and head down to Costa Rica. One of the vans taking us to the dock was a bit late, a sign of things to come. The trip to the dock was good, we passed heavy machinery starting to clean up some of the slips we had crossed on the previous journey and made good time. We were early at the dock so sat and waited, bought things at the small store and watched some of the locals fishing off of the dock. Then the ferry arrived.

The captain wasn’t having a good day. He managed to steer the ferry in a little crooked and then the winch for the loading gate failed as the gate was about a foot off the ground. The next hour saw the boat manually pushed into position and an increasing number of people climbing up to the winch machinery and poke around trying to get it all working. They got there in the end.

Again we had a smooth ride over the lake and arriving at San Jorge we found our bus waiting ready to take us on to the border. This drive took only forty minutes and we got off onto the dusty road to walk up to the border buildings to get our exit stamp. We arrived to find no queue so only had to wait for the official to process our passports which he did quite slowly. On to the next queue in a nice air-conditioned room the Costa Rica entry took no time at all and we moved into the next door restaurant for some lunch.

While eating Josh gave us the news that our onward transport had broken down on the way to pick us up and we would have an extra hours wait. Another half hour and Josh said the bus wasn’t coming at all so we would have to go meet it halfway. Josh organised taxis and we took a crammed two hour journey into Costa Rica looking for the van of Don Taco, owner of the next hotel.

Arriving at the crossroads where the van was waiting I gratefully got out of the taxi to stretch my numb bum. Thankfully Don Taco’s mini-bus was spacious and now we were two people down we all had a good amount of space. We started on the road to the Monteverde area and the last 32 kilometres took nearly two hours, the road increasingly unpaved and hilly. We managed to stop once to look at the vivid pink and orange sunset and then continued to Don Tacos Hotel in the town of Santa Elena. 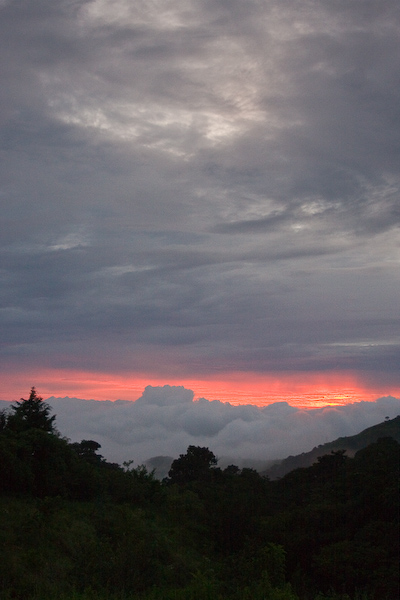 Sunset on route to Santa Elena

The rooms here were nice and clean with plenty of space. Our first task saw us head into town to get some laundry done and then we joined the rest of the group at a restaurant for dinner. It was Angie’s turn to leave the group, she has been in Costa Rica plenty of times as a GAP leader so didn’t need to take any more shadow training. After dinner we joined those going to a nearby bar and had a drink before saying our goodbyes to Angie. That done we headed back to the hotel to sleep off the tiring day.