The obvious activities on Ometepe involve the volcanoes and taking the option to climb to the top. The wet recent weather meant that this would be tough, the taller Volcán Conception was effectively closed to climbing because of the muddy slopes and it wasn’t recommended to climb the slightly shorter Volcán Maderas either. I joined Andreas, Peter and Stefan to take a shorter walk up the slopes of Maderas to the San Ramón waterfall and Keryn went with Aaron and Cecylia on a guided horse ride near the hotel.

Keryn’s trip saw her ride the horse to see some nearby petroglyphs (ancient rock carvings), walking around to look at the different carvings and investigating the plants at the site. They then travelled along the roads of the island taking in the scenery before returning along the lake shore. They met Leah and Dylan cycling around and got some nice views of the volcanoes in the sunny weather. 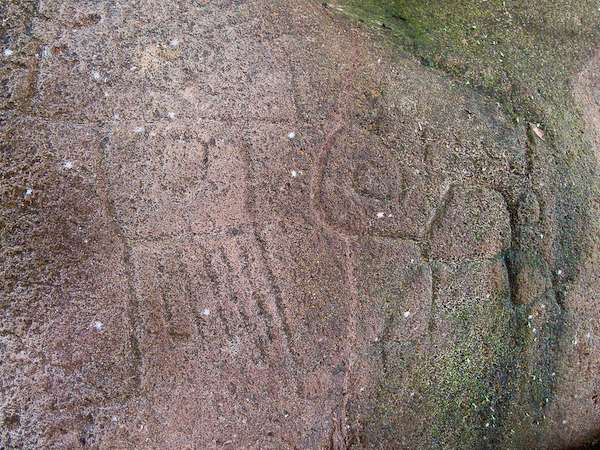 One of the petroglyphs 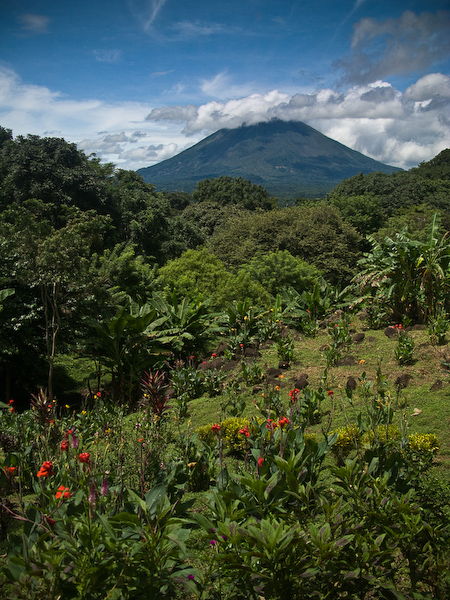 Volcán Maderas and the lush vegetation of Ometepe 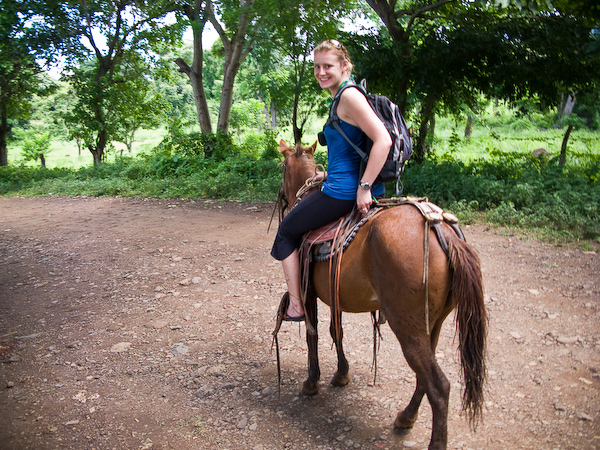 Cecylia on the horse ride 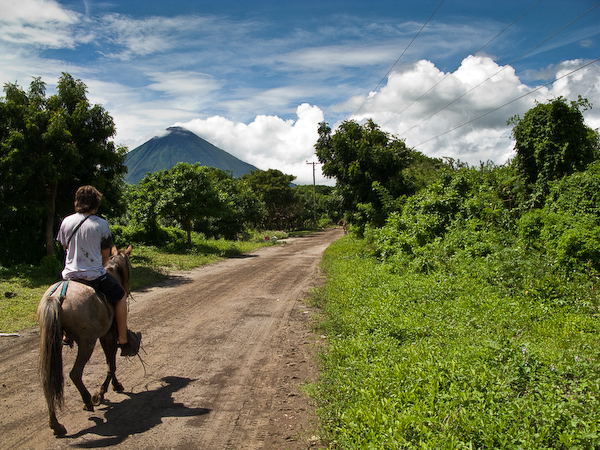 After a twenty minute drive those of us walking went with our guide on the path to the waterfall, a 3km journey. We started at a quiet hotel and followed the clearly marked path. A dog joined us as we walked through the hotel grounds, obviously used to people going for walks. The first kilometre was pretty easy by tiring, walking in the sun and heading up the steep path which was wide enough for vehicles to travel along. The farmland gave way to forest as we climbed, the second kilometre offering more shade but we were still all dripping with sweat. A large locust landed on Stefans foot so we took a moment to stare at it. When it flew off its red under wings were visible contrasting with it’s mostly yellow body. 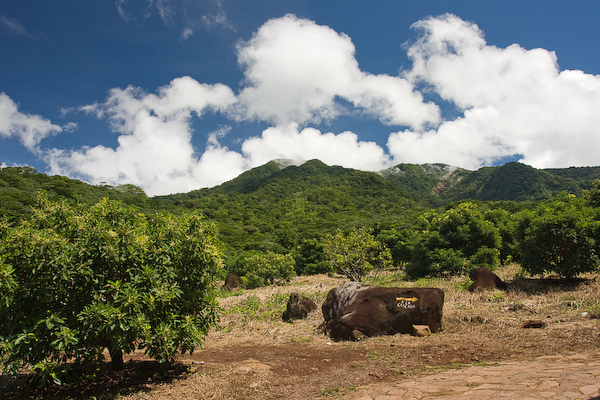 The way to the waterfall

Each kilometre was marked with a sign and we started on the last third by leaving the wide path and entering a narrower trail that took us into the jungle proper. It was cooler under the trees and we soon came across a stream to our right which the path ran beside in parallel. Coming out from the trees we came to a fork in the stream, to our left a smaller stream flowed down from a waterfall half seen behind the rising bank and to the right the larger stream continued up before disappearing behind a bend. The streams were set in wide banks of mud and rock, obviously when the rains are strong the volume of water was enough to deposit huge amounts of detritus. Walking over the loosely packed materials was harder than it looked, every step had to be checked for loose rocks. 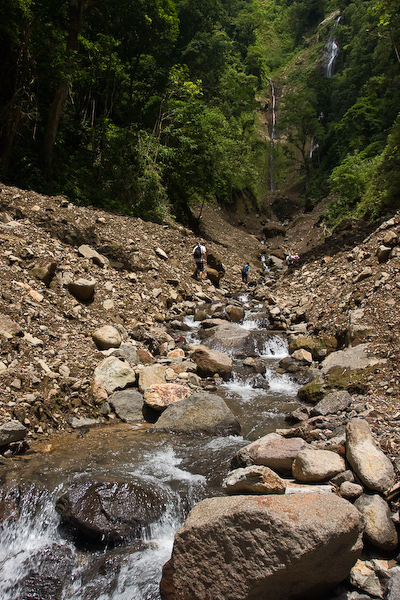 The dirt and rocks of the stream banks

The dog was still with us and he crossed the stream to the right and looked back, waiting for us to continue. We moved on and hugged the stream for another ten minutes, crossing it at various points while looking for the best path. Coming around the bend we could see a tall waterfall ahead, the narrow flow looking fragile in the distance. We came to a natural viewpoint and stopped to admire the view and have a drink and then it we pushed on for the last clamber over rocks and dirt to come to the face of the waterfall. 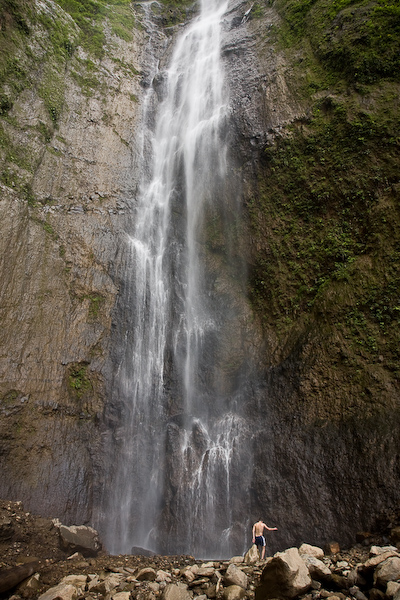 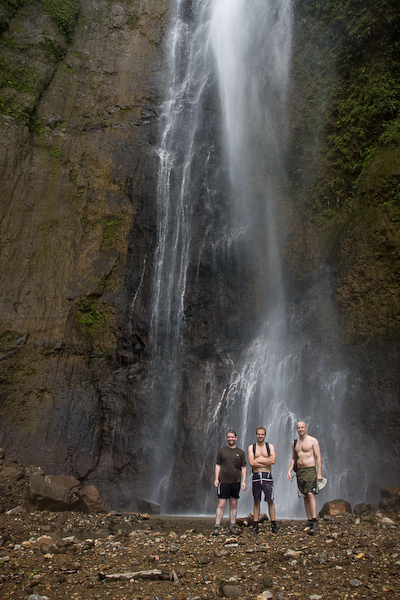 Posing in the cool spray

The waterfall was tall but didn’t have a huge volume and as such there was no pool we could swim in. Still, it was wonderfully cooling just to stand in the spray and we had a relaxing time taking photos and investigating the area. The smaller waterfall to the left of the main fall was easily accessible and I walked right up to it, washing the sweat from my arms in the cold shower of water. It couldn’t last and we set off back down the path. I lost my water bottle in the process of clambering down a rocky part, the bottle bounced down and into the stream and we couldn’t reach it in the little eddy that it lodged itself into. 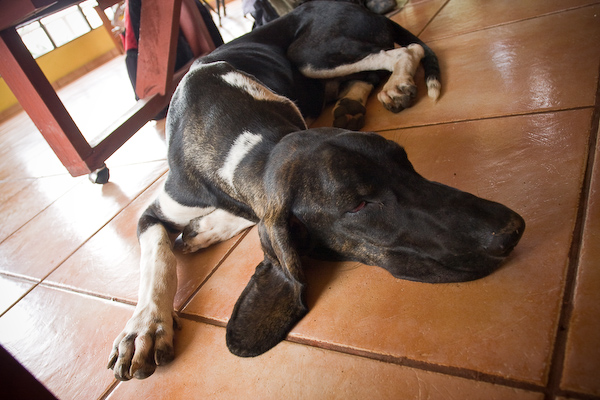 Relaxing after a long walk

Naturally enough the downhill journey was quicker than the uphill and we arrived back at the hotel by the path an hour and a half later, hot and tired. We had a cool drink and some food in the hotel, the kitchen brought to life just for the four of us and our guide. The dog also came inside and collapsed under our table, one long walk enough activity for the day. The food took a while to appear and it was lightly raining as we drove back towards the hotel.

Back at the hotel I missed a monkey visiting the kitchen and getting some food, a daily occurrence. Keryn got a few photos. I did manage to get shots of the local Magpie Jays, precocious birds that spent lots of time flying and hopping around the hotel whenever people were eating. Keryn headed out with others to go to the nearby swimming hole and I stayed behind to sit and do some typing with a cold beer or two. The rains started during this time, the water hole people walking back in a cold shower. 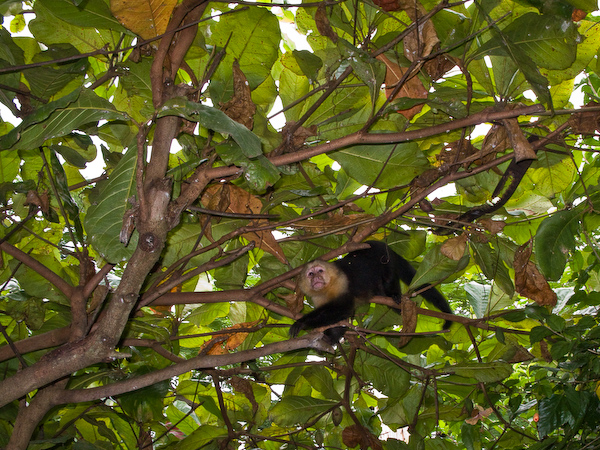 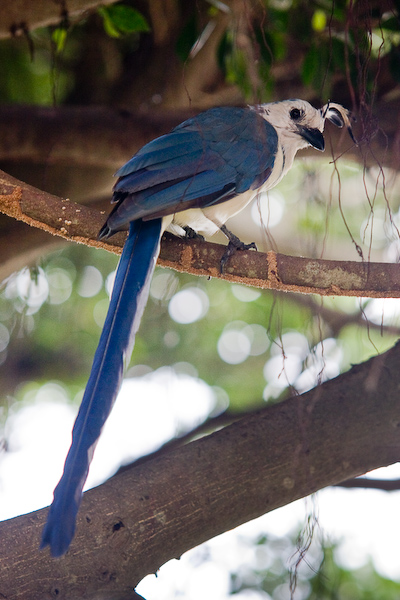 We sat around after dinner over drinks, Keryn and Josh trying to finish off their bottles of rum bought for Ometepe. As such Keryn and I were the last to go to bed other than Josh, an odd occurrence what with our normal early turn ins. It probably had more to do with people being tired and a long travel day coming up.