Our sailboat trip wasn’t starting till 10am so most of us had a slow start to the day with breakfast at the Happy Lobster. Today was our 5th wedding anniversary and a day on the water sounded like a nice way to spend it. The food was OK, if a little slow coming, and for some reason a number of items were unavailable. One such thing was bananas and this seemed odd as I was able to buy a couple of bananas very easily when I went out to the local money machine. 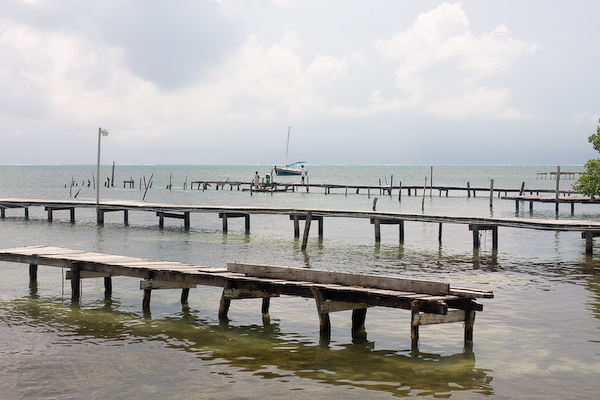 Seen from the Raggamuffins Tours Office

Our yellow sailboat was captained by Patrick and crewed by Jose. Along with our lot there were five extra people who mostly keep to themselves at the front with the rest of us arranged either on the deck, sitting with feet dangling over the water, sitting or lying down. We sailed (well, actually there was almost no wind so we used the motor) for an hour sail out to our first dive spot which was outside the local marine reserve but had the benefit of occasional Manatee sightings. 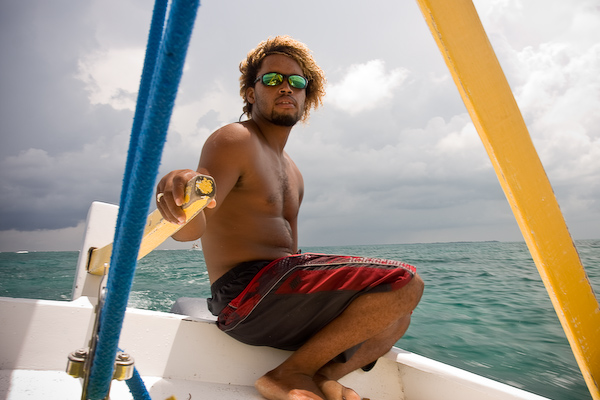 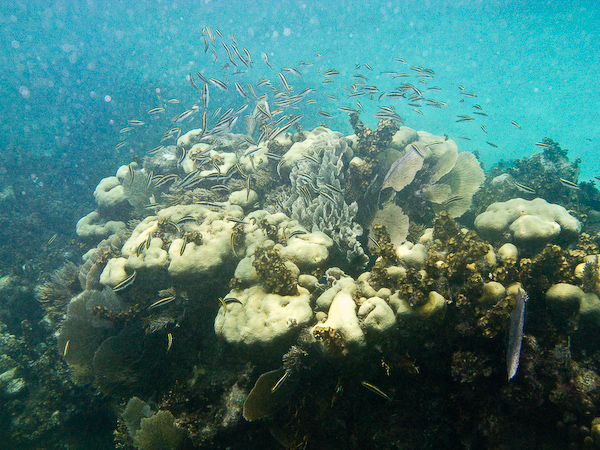 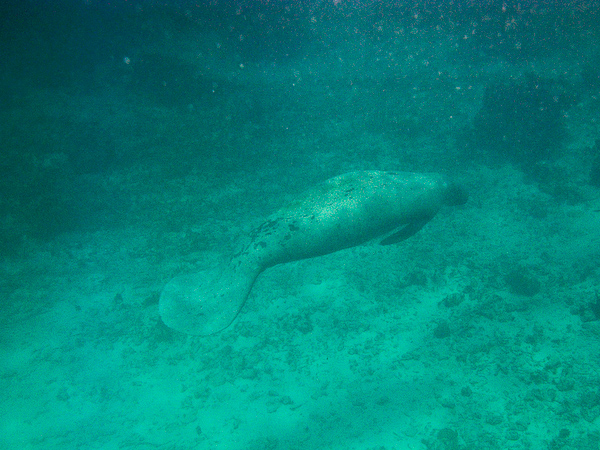 Things started badly for me, I was lumbered with leaky snorkel. I still managed to see lots of fish and nice coral, the water was a bit silty but still visibility was good. Following Patrick, now guiding us in the water, I was close by when he pointed and I saw a manatee heading straight for us about two meters underwater. It veered away, followed by a pack of snorkelers from another boat. Most of us got to see the large mammal, ungainly looking but graceful in its element. We swam back to the boat and moved on for a short sail to the next spot, Shark and Ray Alley. 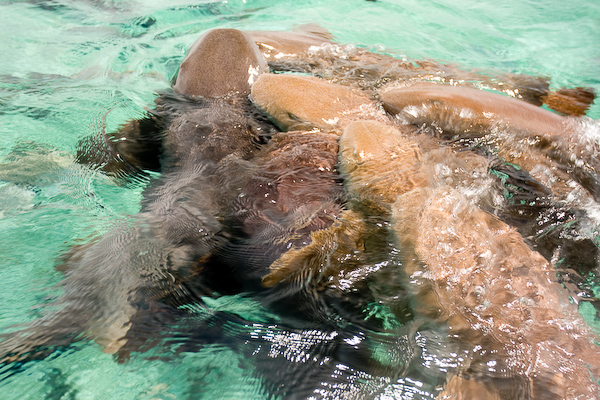 Sharks going after the food 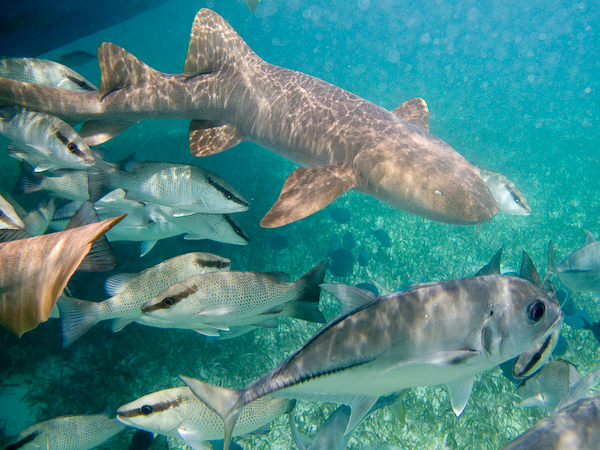 The fish and sharks around the boat

Almost immediately as we stopped here in the Hol Chan Marine Reserve we were surrounded by fish and then we all saw the rather large looking sharks. A dozen brown nurse sharks and a few stingrays were circling together and went a bit crazy when some food was thrown in the water, climbing all over each other in a desperate attempt to get a bite. It was explained that these fish were all harmless and that we’d be fine so long as we didn’t try to touch the animals. Into the water we all milled around as we stared at the hundreds of fish swimming with us. The sharks had mostly disappeared by the time I was in the water. Splitting into two groups we were taken around the nearby reef and had fish and coral pointed out and identified as we swam for forty minutes or so. 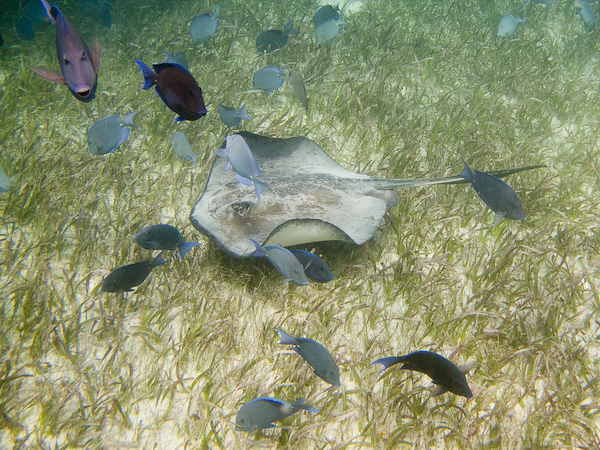 One of the circling stingray 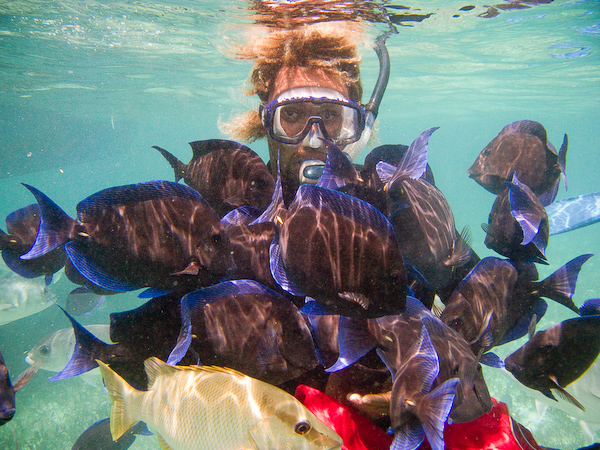 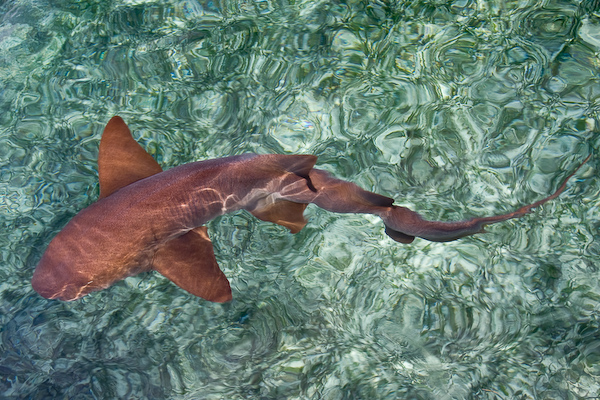 A lone shark coming to the surface

We were provided with lunch before heading on to the last location. Here we would be swimming along the sides of a channel in the reef, often used by boats to head out to deeper waters. Larger fish could be spotted here. In our two groups we moved around, initially spotting some of the turtles that were eating the sea grass near the boat. We say four of various sizes, the largest probably a metre in length. There were also a few barracuda floating still as we headed towards the channel. Nearing the edge we disturbed a couple of nurse sharks and followed them for a short distance as they swam away. In the channel large grouper and other fish I don’t know the names of patrolled the deeper stretches. There was a short underwater cave that a few people swam down to and through and just past this a large shoal of tiny sardines milled around as large fish picked individuals out for a snack. By this time I had sorted out my snorkel so I was able to actually spend most of the time with my head down rather than spitting out water. We passed over some divers and saw another shark on the way back to the boat. 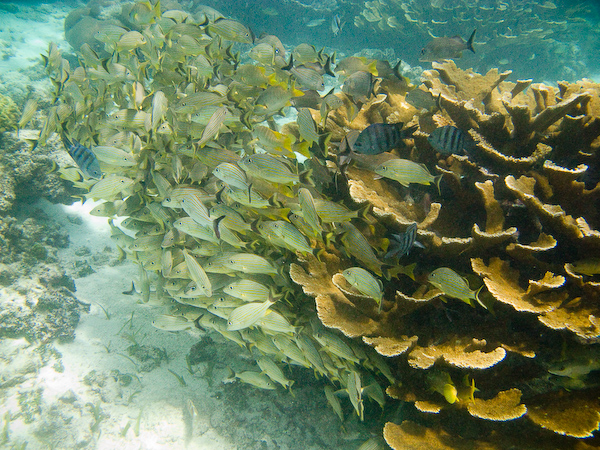 Fish massed in the shelter of a coral structure 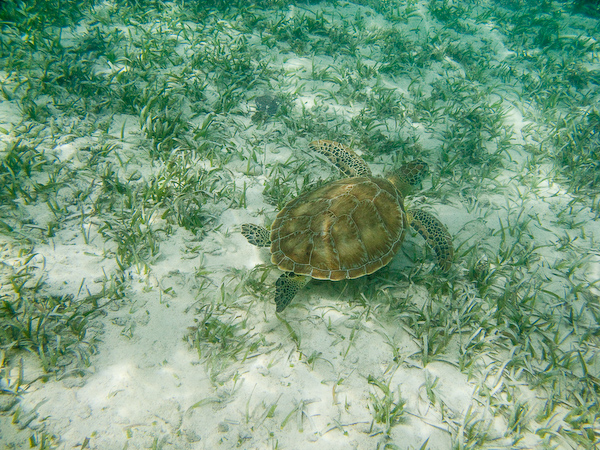 Diving to the cave

That was our last stop. The journey back to Caye Caulker was made under sail as the passengers drank rum punch and nibbled on nachos with salsa. Everyone had a great day and spent the journey talking about the days scenery and feeling happy and content.

Dinner tonight was at Sid’s Restaurant and Josh had arranged a few bottles of wine (Blackberry and Cashew flavours) to celebrate all the recent birthdays and our anniversary. After dinner the party continued in a few bars and people came back to Lena’s Place at varying times throughout the night, we naturally being earlier than most to retire. 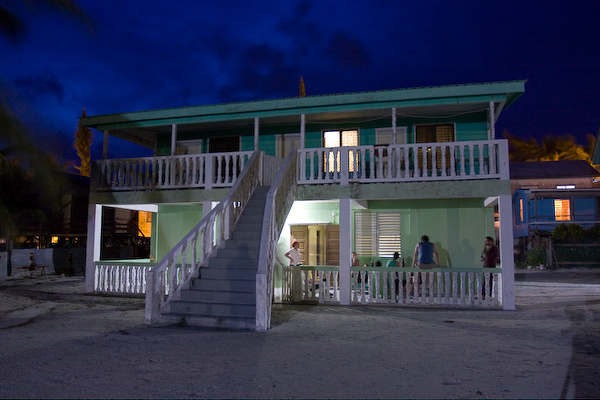