It was our last long driving day of this section of our journey (the Central America part is a combination of three tours with GAP Adventures and a week to ourselves in Costa Rica). Everyone was at Don Mucho’s at 8am to take taxis to the bus station. Only one van arrived and it wasn’t large enough to take everyone and the luggage so a second taxi was arranged. The bus ride was nine hours without incident, one stop for a lunch break and not a lot else to write about. We did drive alongside the ocean for a while as we entered the YucatÃ¡n Peninsula region.

We came to the city of Mérida around 4:30pm and Juan Pablo organised taxis to the Hotel Trinidad Galleria. The hotel was easily the strangest we had so far stayed at, almost a museum of modern art with rooms than a traditional hotel. There were strange artworks all over the place; paintings, sculptures and weird things like a dresser adorned with old style plastic dolls looking creepy to one side of the foyer. There were also fountains, the one in the foyer containing fish and turtles. Our room was big but hot, luckily we had a large fan to keep the temperature at least manageable. 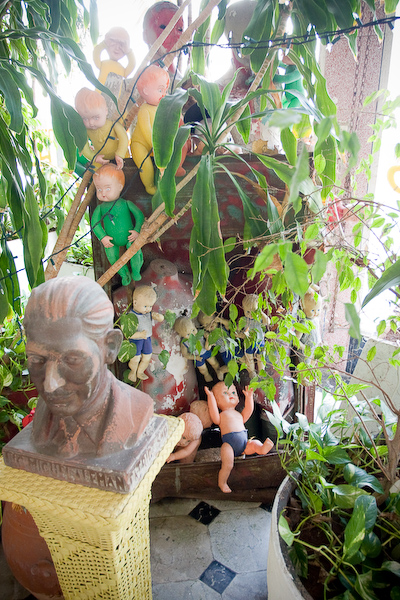 With a group of people we wandered out to find a laundry, change money and see if we could find a better rate than that offered at the hotel for a tour the next day. We found a laundry after bumping into a friendly local who led us the right way, but failed to find a better deal for the tour. Keryn and I split off and wandered the Zócalo before settling on a place to change some money. In the Zócalo there were a few people using laptops which seemed a bit strange. We tried ours and were pleased to discover free Internet access. While surfing we were joined by a chatty local who seemed nice enough. He told us that the next day was a holiday and that the best ‘official’ tourist shop was just around the corner. Unfortunately neither of these claims was true, the first said simply to try and get us to visit the shop that evening. We didn’t go to the shop and found out later from Juan Pablo that there was no holiday.

Dinner was at a restaurant near the Zócalo that had been recommended earlier and we talked briefly to Juan Pablo and others as they arrived. After eating we wandered back to the hotel and paid for the following days tour and then it was to the room for an early night.