There is a road near La Paz called the death road. It’s a single lane dirt road carved into a mountain side and at many points there are steep drop offs of up to one hundred meters. For years it was one of the main routes towards La Paz but in the last few years another newer road has opened up so there is less traffic, only the odd local bus or other vehicle belonging to someone who lives near the road. Someone decided it would be a good thing to send groups of tourists on bicycles down the road and while it is marginally safer now with the lower traffic volume it is still a dangerous ride – people die every year (mostly through their own stupidity). But it’s also heaps of fun.

We walked to the Downhill Madness office, having a quick breakfast on the way. At the office we were all kitted out with gear; gloves, a helmet, a jacket and waterproof over-trousers. When we all had our gear we loaded into two vans and headed out of town to the start of the death road ride.

As we headed up into the mountains the weather got wetter and by the time we arrived at the high pass that was our start point visibility was rubbish, the world a grey blur through the mist and lightly falling sleet. The bikes were unloaded and we all got given one that matched our height and then we were given a safety briefing. The first twenty kms was on tarmac road to get us used to the bikes and we would be descending fast. 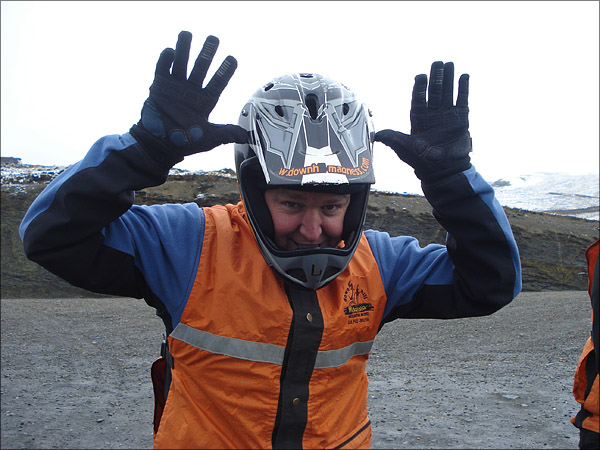 We were off. There were regular stops to make sure everyone was OK and we had refreshments a couple of times as well. We got really good speed in the first sections, the road all downhill and in good condition. The views were spectacular with snow topped mountains everywhere and the lower we got the clearer the view. We did have to stop at a checkpoint, walking the bikes and as the altitude lowered it got hotter so we were soon stripping off the layers. 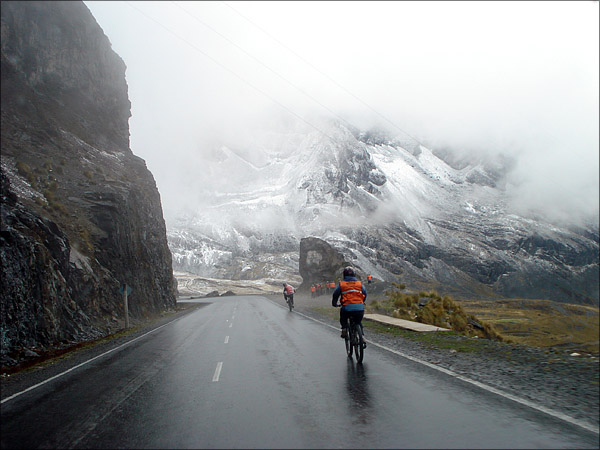 The cloud and mist 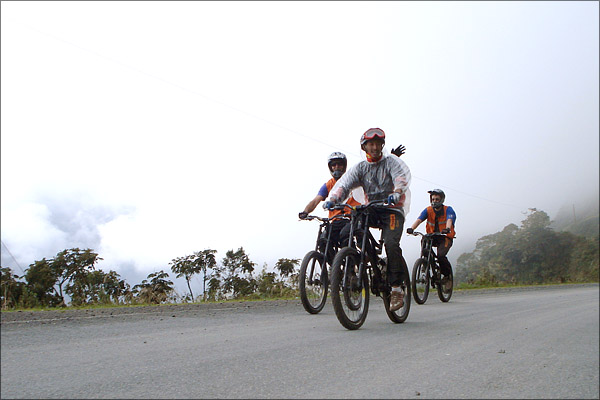 One of our guides

Then we reached a three km section of uphill. Some took the option to be driven over this part but I thought I’d try it. This was one of the hardest things I’ve done so far, the lack of air with a constricting helmet meant I was soon gasping for breath and really struggling. I made it most of the way, only having to walk the last part uphill on a section of gravel road.

We came to the turnoff for the old dirt road, the death part, and were given some extra advice on riding on the dirt and gravel. After the first part we were split into slow and fast groups and then we were on the road proper, trying to stay away from the big drops and looking out for any oncoming traffic. We stopped at a few significant points where people had died, for instance a spot where a girl had accidentally backed her bike over the edge and fallen to her death. There were memorials at the roadside in these places, sobering reminders that we had to keep our wits about us and not do anything stupid. 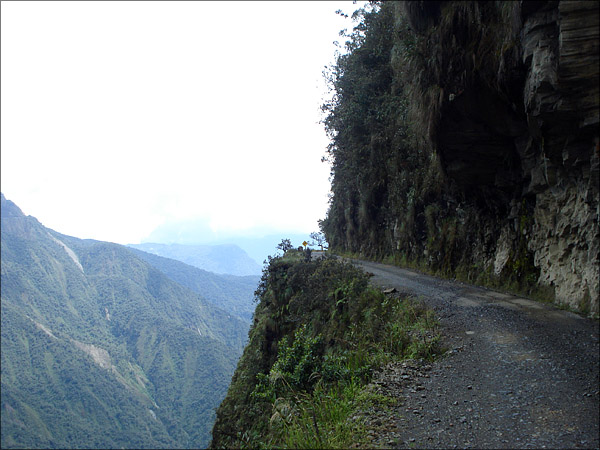 There were only a few little mishaps along the way. Mel got a flat tire and Danny and I had to take evasive action to not crash into her but thankfully we all had a good distance between each other. When our guide swapped bikes with Mel so he could fix the puncture he didn’t mention that his breaks were reversed and Mel came around a corner, hit a small rock and when breaking hit the front brake too hard sending her tumbling over her handlebars but she recovered from this accident quickly. Later on Vanessa braked a bit hard and slid over but again there was no damage done. 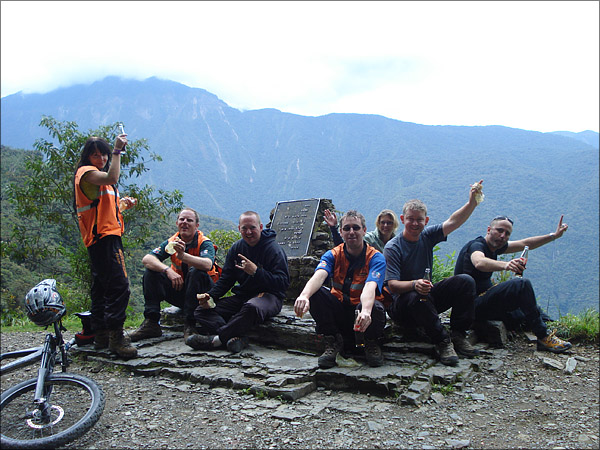 Lunch at a memorial 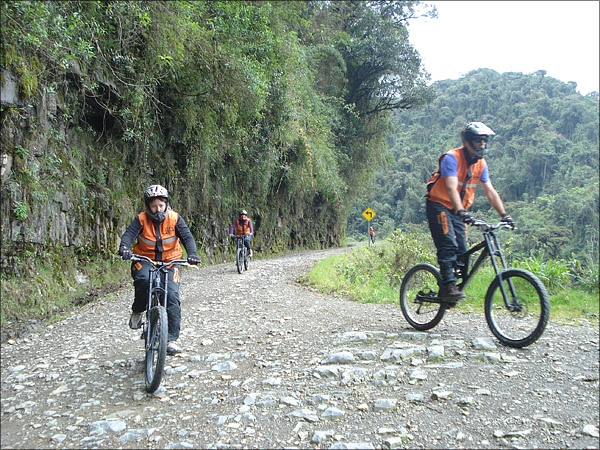 The landscape was now all forest and when we stopped for lunch we saw some colourful birds flying in the trees. We rode under some small waterfalls and picked up speed again when we got to a wider, straighter section. There was a shallow stream to cross and a short part of shallow uphill before we came around a corner and into a town, the end of our ride. We parked up the bikes and sat in the shade of a shabby little restaurant and had a cold drink while waiting for the slower group to arrive. We had a few group photos and were then back into the vans to be driven to a nearby hotel where we would be having lunch. 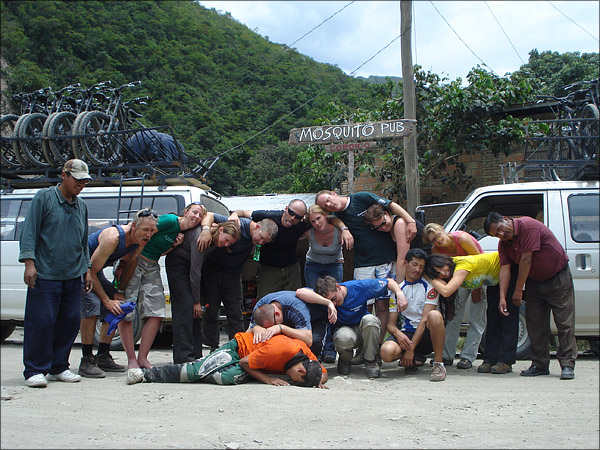 The lunch buffet was nothing to write home about but the beer was nice and cold. We had a swim and a shower before being driven back to La Paz, the vans going back over death road giving us more time to admire the views. We went to a different restaurant for dinner, a nice place called Sol y Luna, and had some final farewells to those leaving the trip. It was sad to see people like Kerry leaving, after this our group would be down to only eight people, quite a change for the days ahead.