Eight of us headed out this morning for the ride to Caño Negro, a nature reserve along the Rio Frio. Probably the best parts of the day were actually seen during the drive out to the reserve. First up we came to a point on the road where a number of tourist vans were parked up next to a field. Stopping we were pointed to a sloth relaxing in a tree near the road. Naturally we all took photos and the sloth obliged by lazily looking back at us. Sloths are slow primarily because of their diet, being leaves and other vegetation high in cellulose. It takes a sloth weeks to digest its meals and all of the energy generated goes into digestion, so the sloth doesn’t have much left for dancing or trips into town. 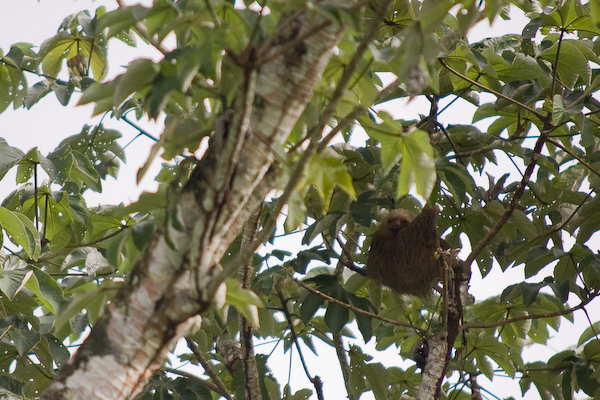 The sloth in its tree

Next up we were driven to a restaurant by a river and shown the resident iguanas. There were literally hundreds of the lizards arranged over trees between the restaurant and the river. Lots of photos were taken of the barely moving iguanas, they were more interested in sleeping off their morning meal of fruits provided by the restaurant. We had one more stop to put in a lunch order and then drove ten minutes down the road to the river dock at Los Chiles. 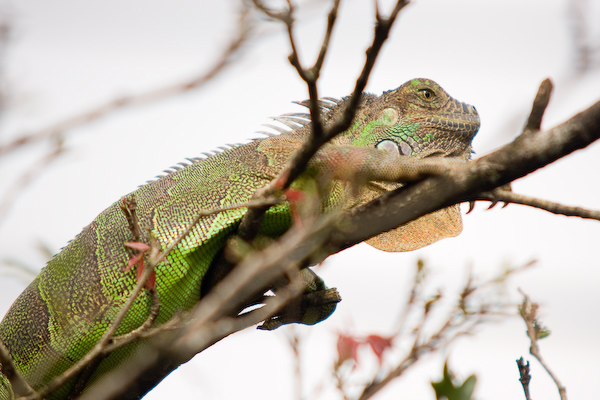 An iguana perched on a branch

The boat trip saw us slowly travel up and down the Rio Frio with our guide and boat captain spotting wildlife on the banks of the river. The jungle lined both sides of the river and wasn’t very deep back from the banks so any wildlife was forced towards the riverside. We saw lots of different birds such as herons, kingfishers, snake birds, cormorants, fly catchers and tiny river swallows. There were also a couple of groups of howler monkeys, one of which we managed to engage in conversation. Someone on the boat would hoot and the howler monkey would take a moment from eating leaves and call back to the boat. There were also reptiles; a couple of caiman, basilisks or Jesus lizards (they can run over water when they get up speed) and also a lone iguana. The best thing we saw was a group of bats resting in a well defined line on a tree trunk. We got right up close and they started moving from side to side, almost dancing. It is thought that they stay in the line to look like a larger animal and maybe the little movements make it look like the imaginary animal is waking up. We did also very briefly see a turtle surface for air and some large fish sinking under the surface. 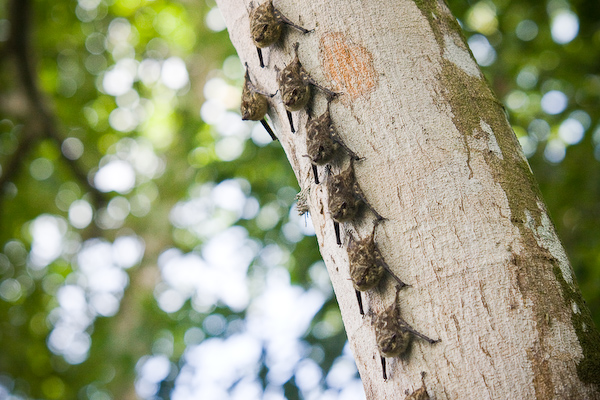 The bats all in a row 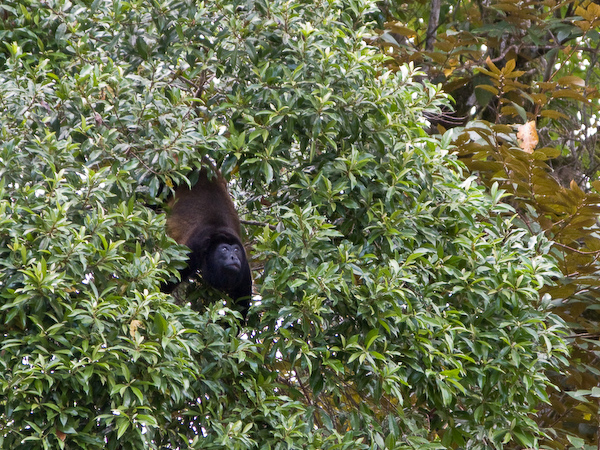 A howler monkey in conversation 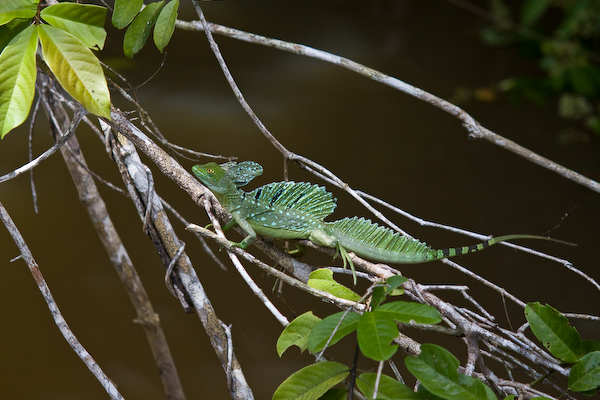 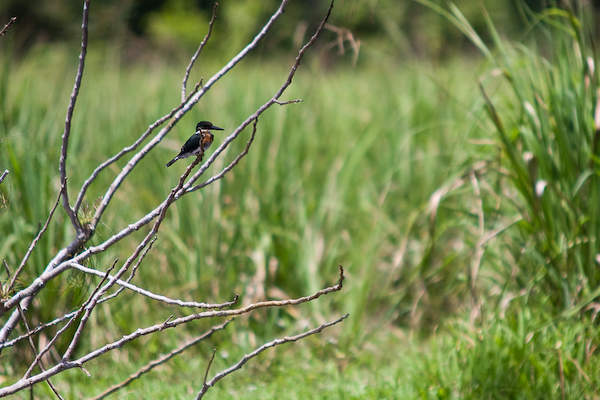 It was warm in the sun and there were large periods where we weren’t seeing much so people were getting tired. Once we turned around and moved at pace back to the dock everyone started getting ready to head in the van for lunch. Before lunch we drove to the nearby border with Nicaragua just to have a look but when we got there the area was cordoned off and we were waved away by the officials. Because of this we were a little early for lunch but the wait was worth it, the food very tasty. The fruit drink provided was very nice as well, when we were shown the fruit it looked kind of like a fig, but I can’t remember what it was called other than being some kind of local guava.

We got back to the hotel in the early afternoon and I sat down to process photos and do some typing. It started to rain and then it turned into a full on storm with impressive multiple bursts of lightning followed by extremely loud and drawn out rolls of thunder. Sometime during this display the town lost its power so I headed out to the balcony to watch the weather with others who were already there.

While outside we saw regular groups of horse riders riding by, often at a gallop. There was a rodeo in town and we found out later that there was meant to be a parade at 3pm but the weather spoiled that idea. The riders were in town anyway, all in their riding clothes with their horses nicely groomed so I guess they decided to ride around town anyway. For an hour or so the horses went by in dribs and drabs, it was a good spectacle and more of the riders seemed happy to be noticed, waving and smiling when they saw me and my camera. 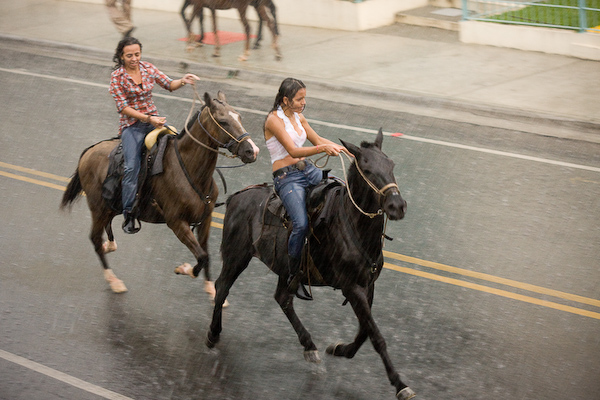 Riders gallop down the street through the rain

Some people were over the road from the hotel at a bar so just about everyone ended up sitting in a group and drinking beers by candlelight while waiting for the weather to abate. Stefan and Andreas had spent the morning on a waterfall rappelling trip and came back very content, Stefan mentioned it was the best thing he had ever done. Maybe I’ll try it out next time, the photos I had seen certainly looked spectacular.

The rain pretty much stopped as evening came on and most of the group joined Josh at a restaurant called Lava Rocks for dinner. The food was excellent and it was good to get a filling meal before the white water rafting the next day. With the rafting in mind (and because we always do it anyway) we were off to bed early with the intention of packing up in the morning.