We had an early start to head out on the river to look for wildlife. We saw lots of animals as usual and even a few monkeys high up in the trees. Then we went downriver to do some fishing, along the way getting stuck a few times and people having to get out pushing us past the low water sections.

We fished with simple hooks and lines with small pieces of meat as bait. Catching anything proved to be difficult, we were feeding the fish rather than fishing it seemed at times. Our guide was quite the expert and caught half a dozen fish including a few different kinds of piranha. I managed to get two fish as well, one a tiny little thing that had been hooked through the eye socket. All the fish were unhooked and released back into the water. 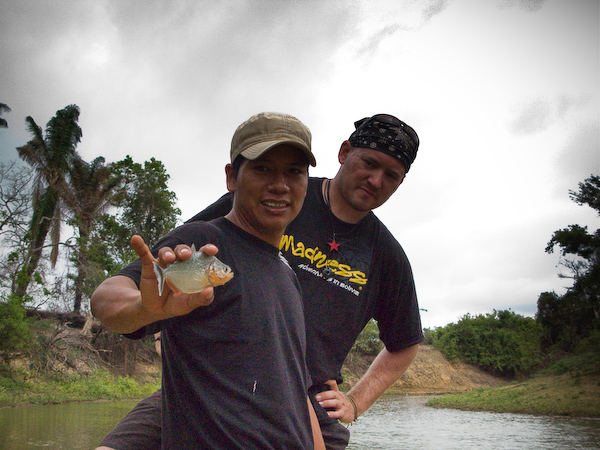 Our guide catches a piranha 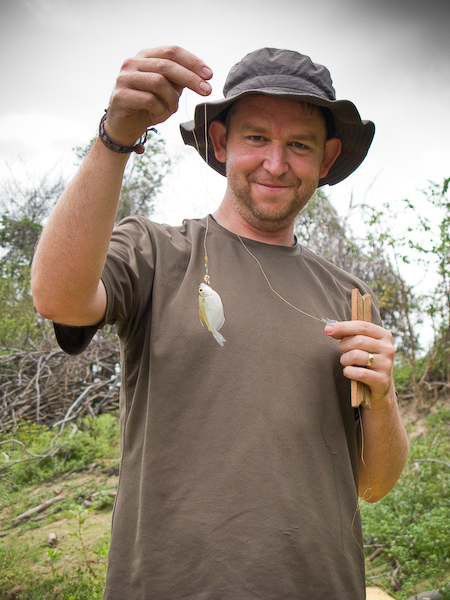 Not the biggest catch of the day 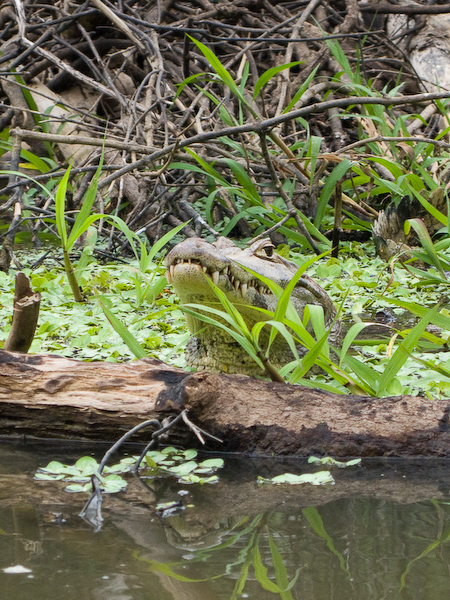 Back to the lodge we packed everything up and then loaded into the boat one last time for the trip back to the end of the river. Danny scared some of the others by dressing up in a swimsuit that Angie was trying to get rid of, I’m not sure if it was funnier watching Danny or the reactions of those in the lodge. It rained a little as we returned but the abundant wildlife kept the view interesting. We got one last look at the king of the river, a huge black caiman that ruled one pool at a bend in the flow. The rain stopped as we disembarked and started unloading. There were people waiting to be transported to the lodge and one of them asked someone if we saw any alligators. I think they thought we were joking when we said yes, we had seen lots – they’d soon see for themselves. 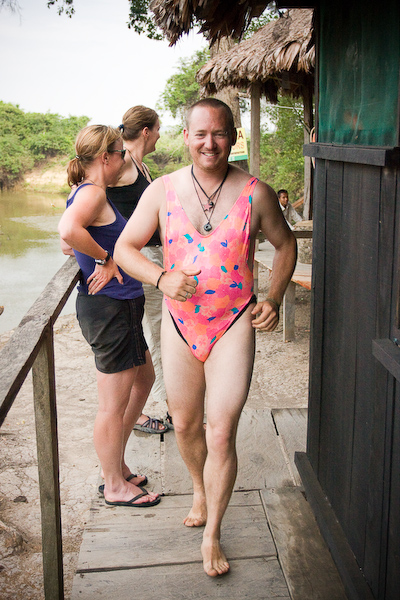 Danny, what were you thinking?

The rain had turned the dirt sections of road into slippery mud on a base of clay and we spent a long time crawling and gently fish tailing our way back to Rurrenabaque. It got really bad for a few kilometres and we passed a bus and truck that had just stopped on the road, unable to get any traction and stuck in the middle of nowhere. Thankfully we were able to pass these stationary vehicles that were not exactly positioned for easy getting around. We did almost spin out further along the road and had to carefully work our way away from the edge. It was a relief to get back to the rockier road.

We arrived back in Rurrenabaque and checked into a hotel for the night, hoping that our flight would be taking off the next day. We had dinner in a local restaurant come bar and a few were out all night. I was just happy to have a comfortable bed to sleep in again, it had been hot and my bed had been missing a few slats in the lodge.