Leaving Ollantaytambo we drove in the bus towards KM 88, the starting point for our traverse of the Inca Trail. According to my guidebook the town here is called Qorihuayrachina and we were at an altitude of 2600m. Getting off the bus we were greeted by the sight of dozens of men in matching uniforms busily packing gear into backpacks. There were a few different companies present and the most striking uniforms were the blue outfits worn by our team of men (from the company SAS) and another group all in red which I called the red army. 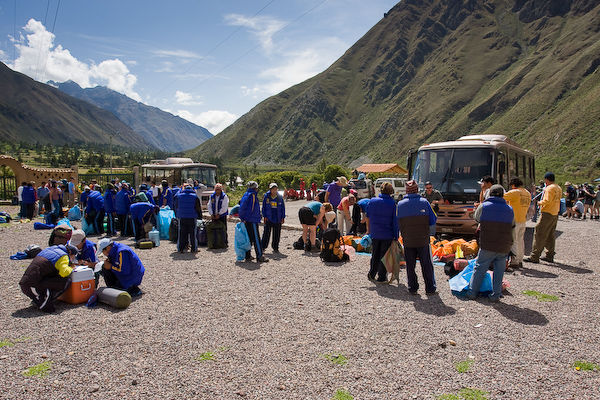 At the staging area

Our packed bags were collected and weighed and then distributed along with everything else into the bags of the porters. Our walking guides were Saul and Oscar and once everyone was ready with their own walking poles and day packs we set off. We walked down from the staging area and across the railway tracks that followed the path of the river in the small canyon below. The first stop of the day was at the sign that showed the path of the Inca Trail and we had a group photo. 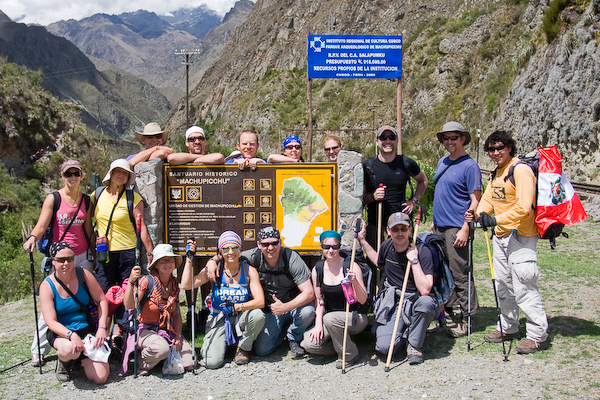 A group photo at the start of the Inca Trail

Next up we queued for a while and waited while the Inca Trail staff checked us against the pre-booked walker lists. We all got through fine and walked over the hanging bridge beside the checkpoint before starting off as a group. Saul would stop us regularly for a break and to give us some history on the trail and any archaeological sites that might be nearby. He explained early on that rather than porters we should refer to the men as Chuskis, a Kechwa name meaning Inca Runners. Also, we were to clap and encourage our Chuskis whenever they were passing us. Finally we were introduced to the concept of ‘Inca flat’, being a path that is mostly flat with maybe a small slope, the odd rock staircase, maybe somewhat uneven, and generally just not traditionally flat. 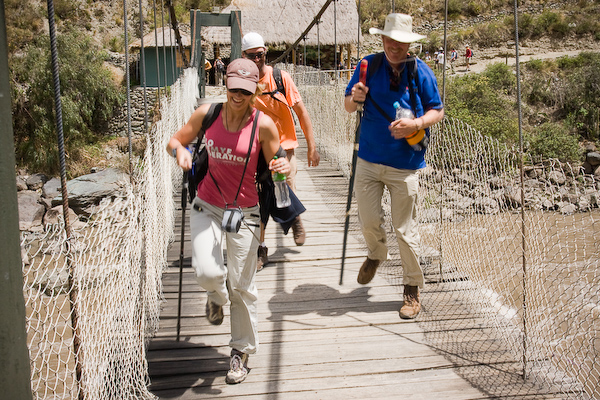 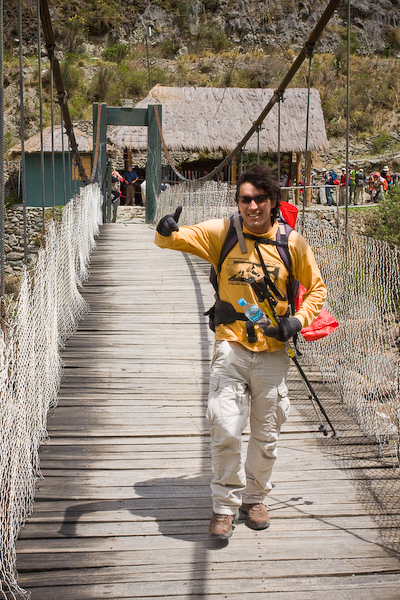 Saul, one of our guides 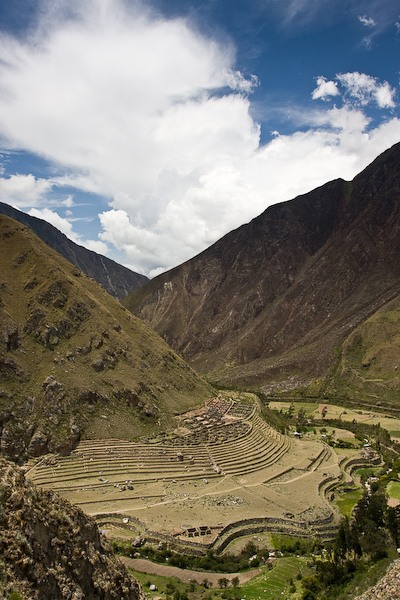 The first Inca ruins seen from the trail

The trail was mostly flat or a shallow rise on day one. There was one steep bit in the middle but it only lasted for a short while. Our group normally had Saul at or near the front and Oscar walking with whoever was at the back. Naturally we all walked at differing speeds so there could be quite a gap front to back and at each stop we waited for the trailing people and let them have a rest before continuing. The pace wasn’t forced, everyone walking at the speed most comfortable to their own abilities.

Lunch was had on the trail. We came to an area with an adjacent campsite across a river and found a tent set up, inside a table and chairs for us all. We put down our gear, washed in the provided wash bowls and then sat. Lunch, in fact all of the meals we were provided with, was tasty and filling with soup followed by a number of platters of food; even a fussy (but improving) eater like me had plenty to have. After eating we had rest time while the Chuskis cleaned everything and packed the tent and tables away. Soon enough we were off again for the next section.

The Chuskis would pass us, normally as a strung out group, after each meal and we would pull to the mountain side of the trail and clap them on. The guys were an inspiration, walking or running with huge packs, some the most awkward shapes, and always arriving ahead of us to set up for the next meal or for the overnight camping. The SAS team seemed to be well organised and equipped with decent shoes, warm clothing and good packs. Some of the other Chuskis we saw were not so well off; worn leather sandals with bare ankles, packs that were nothing more than a large sack with some cloth tied around for a harness, simple clothes and no hats. To see some of these guys over the next few days struggling up hills, sweat dripping, effort etched onto their brow as they trudged on head down to their next stop was humbling, especially when they can be working for next to nothing.

The last section saw us head up a steeper slope, Danny and I at the front and putting quite a distance between ourselves and the rest of the group. We got to a checkpoint and waited for the others to arrive and enjoying a nice break. The rest of the group had actually stopped at a small trout farm to catch some fresh fish for dinner. Once we were all together and sufficiently rested we set off for the last short walk to our campsite. Danny chased some horses ahead of us on the trail and nearly did himself an injury with the over exertion.

The campsite, called Huayllabamba and at 2950m, was on terraces adjacent to the trail and we came through a gap in the hedge lining the path to find all of our tents erected with a cooking tent and our dinner tent on a lower terrace. We could see up the valley towards Dead Woman’s Pass, a stop on the next days walk, and could see peaks in all directions. It was exceptionally pleasant to be able to sit down and not do anything for a while.

Before it got dark we had a little ceremony where we were introduced to the Chuskis. They all gave us their names and the villages they were from and we did the same with names and countries. Then we all shared in a local drink and shook hands. Most of the Chuskis had on local hats, the designs distinct for the village they came from. It was good to meet the men, most of who seemed happy and greeted us warmly. 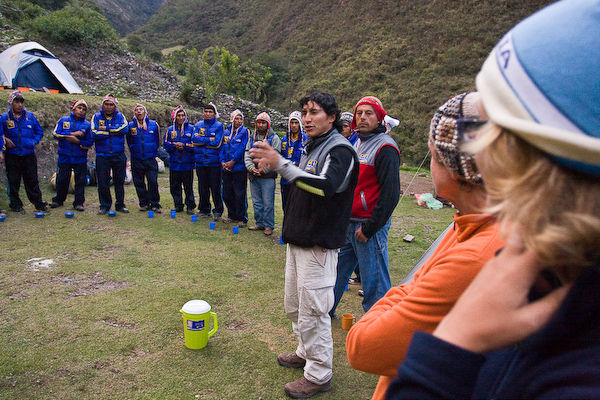 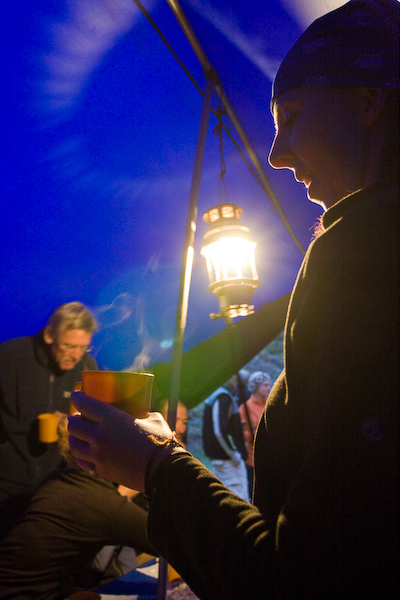 A hot drink in the evening 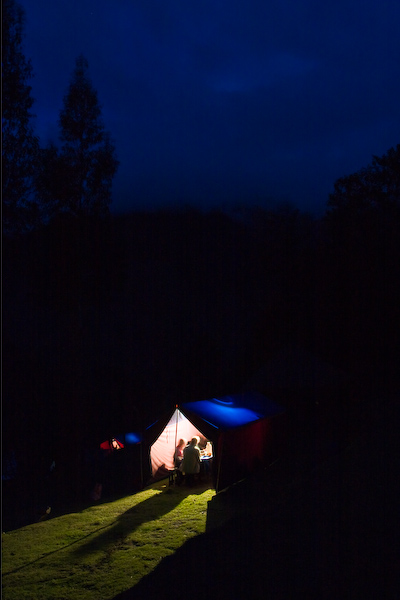 The dinner tent as night descends

We spent the evening in the dinner tent first eating and then playing games and talking. We were all tired and it was a relatively early night for all.