We needed to get up early to give us time to get to Tikal and get into position for sunrise. We would be viewing from Temple 4, the largest temple at Tikal at the west of the site, perfectly placed to watch the sun rise over the jungle and protruding temple tops. Our guide and ride, the same van as the previous day, arrived and we headed off.

Reaching the Tikal site required an hours drive which took us into the Parque Nacional Tikal. Past the Park office there were various road signs warning of animals crossing the road, the usual deer and cattle signs replaced by signs for jaguars and snakes. Once we arrived and had our tickets we joined with the other waiting tour parties and were marched under armed guard into the jungle, the shotgun totting guards presumably either there to make sure we didn’t get attacked by big cats or to hurry us along.

In the darkness we walked for about half an hour, passing various critters (mostly frogs, also a large hairy spider) along the path. We arrived at Temple 4 and walked up the wooden staircase constructed to the side of the pyramid. Once at the top platform everyone arranged themselves on the east facing steps to wait for the sunrise. We were told to sit tight and keep quiet. 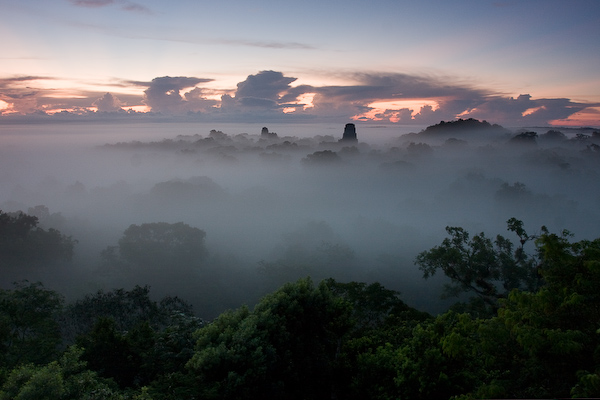 The mist before it rose to obscure the temples of Tikal

The view was simply spectacular. The valley below us was full of mist and only hills and temples showed above the slowly moving white. Sunrise was coming; the sky was full of pale colour. As we watched the mist slowly rose and by the time the sun was above the clouds far on the horizon it couldn’t be seen in the white-out ahead. Still, we may have missed the sun but still had all the sounds of the forest; howler monkeys calling and lots of different birds singing. Shortly after 6am the guides returned and the groups were pulled together for the tour of the whole site below. 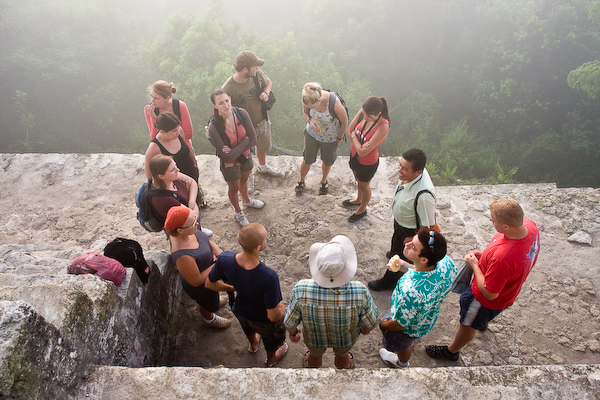 Our group on top of Temple 4 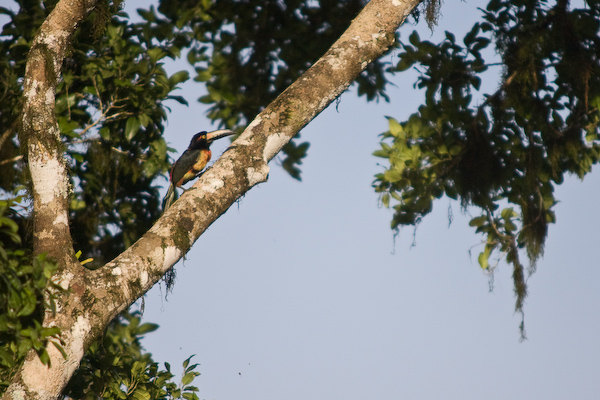 In addition to our private tour there were two other general tours, one in English and the other Spanish. Our group was the last to leave, waiting to see if the mist would clear to show us the temples again. While waiting we saw some falcons on the scaffolding above the temple and toucans playing in the tree tops. The mist didn’t really clear below as the sun came out and the temperature rose so we called it quits and descended down into the jungle. 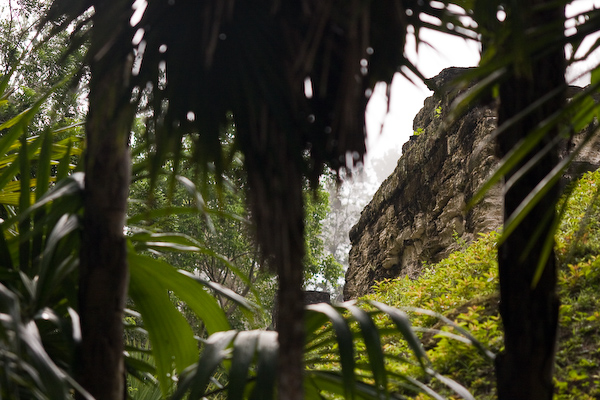 Ruins in the jungle 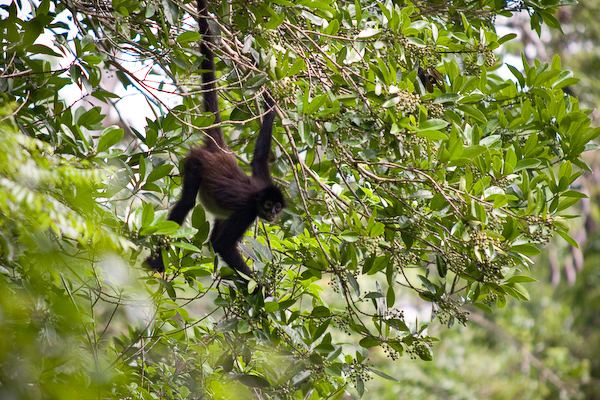 Our guide was an expert on both the Mayan ruins and the varied wildlife. He pointed out various monkeys and birds as we moved between the temples and other structures, but I think the group was getting a bit hot and we didn’t really pay the attention we should have at times. We were able to climb a number of the temples, the largest of which (other than Temple 4) was Temple 5 (the Lost World Pyramid), a mostly intact and very steep pyramid. I decided to head to the top up the wooden steps, not such a good idea. I’m not good with heights and these steps were more like a ladder…by the time I got to the top I was sweating profusely and wasn’t able to do more than shuffle along the platform by the ladder. I took two photos and then descended, with great care, very slowly. 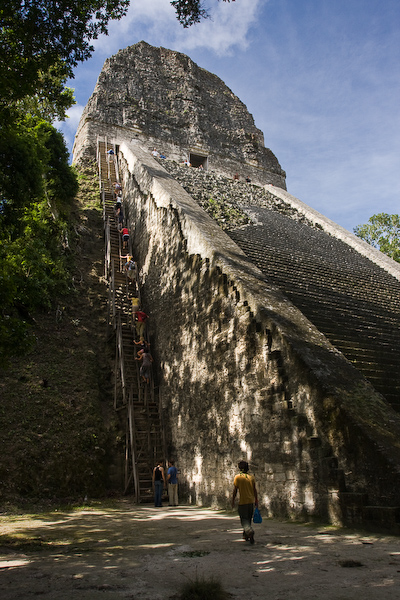 The stairs up Temple 5 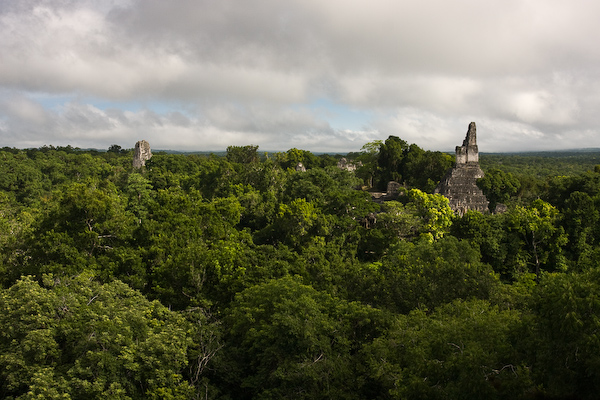 The view from Temple 5

Keryn was sitting under a shelter near the base. We watched a colony of army ants move around, spiders and other insects running and jumping to get away. The ants also scared up a scorpion which was coaxed on to a stick by one of the guides and displayed for any who didn’t mind getting close. Keeping clear of the ants we rested for a while before moving on. 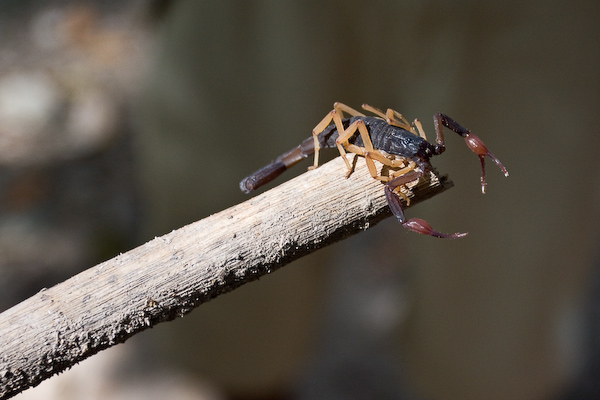 At the centre of the complex, the Plaza Mayor, we had some time to walk around the major temples, Temple 1 (Temple of the Great Jaguar) and Temple 2 (the Moon Temple). Most of the group took the opportunity to rest in the shade and grabbed refreshment from the nearby drink stand. I finally remembered I had a couple of little figures in my bag that Roger had given me when I left Landsecurities so we took some photos to prove they were travelling with us. 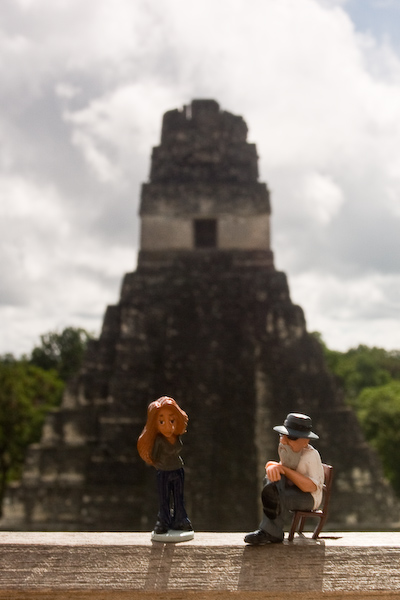 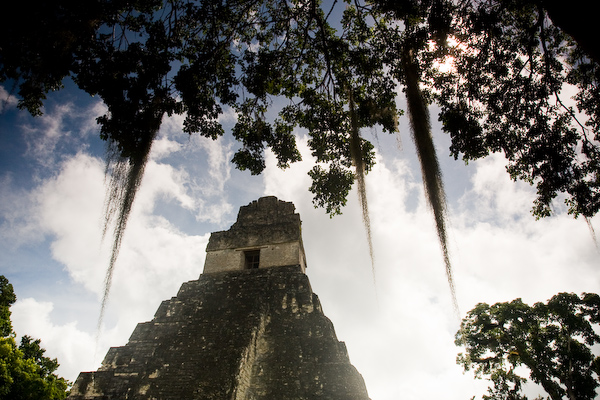 The Temple of the Great Jaguar

Rested it was time to leave the site before it got even hotter. The drive back saw most people dozing off and back in Flores many took a siesta. The afternoon was spent by some swimming in the lake, by others sleeping and most people ended up having drinks overlooking the lake for sunset. We had dinner at the same restaurant, Villa del Chef; thankfully food came quicker this time (and was still tasty). For us sleep soon followed.