There were a few sore heads this morning. It was impossible to sleep in, the sun hitting the tents quickly turning them into small ovens so we had no real choice in getting up around 7am. Mid morning the crew were heading into the nearby surfing town of Mancora and many of us took the opportunity to go have a look around. 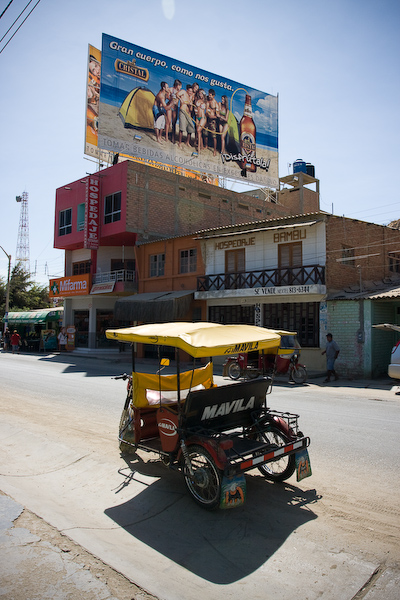 Mancora is one of the prime surfing locations on the Pacific coast and the good waves start in November. We arrived to find the place waking up for the day; market stalls being set up along the main street and most of the shops still shut. This was mainly due to it being a Sunday I think. We walked down the road and there was a lot of purchasing done at the stalls. Keryn bought some jewellery from a very nice couple, the pieces being unique with semi-precious stones set in tightly woven necklaces, the designs more complex and interesting than those on the surrounding stalls. Many of the stalls and shops were selling large hanging shell wind chimes, some over six feet in height. We took a few photos to see if we can make similar things once we’re back in New Zealand. 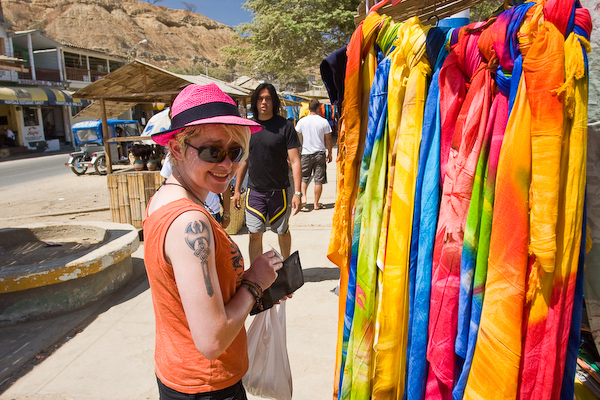 Sophie buying some colourful clothes in the market 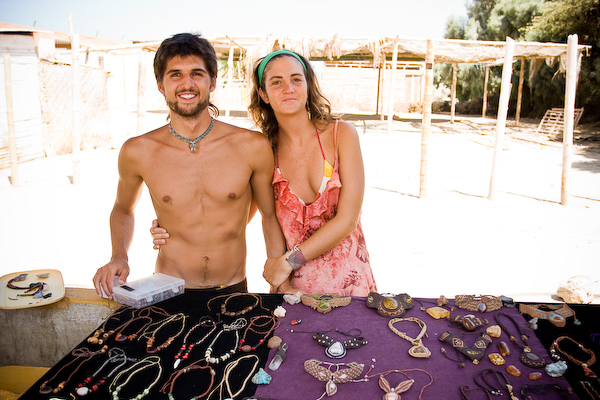 The couple Keryn bought her jewellery from

Further along we headed to the shore and hit the main surfing area. Rows of restaurants were lined up along the path, fanning out as the path expanded as we hit the beach. The beach itself was obscured by rows of brightly coloured beach umbrellas and beyond there were people lounging on the white sand. There were people out surfing but the waves weren’t particularly good, it looking more like a learning group than anything else. We stood looking at the beach for a while and then started back into town to look for some lunch, passing kids playing on the beachfront promenade and walking back past the mostly empty restaurants. 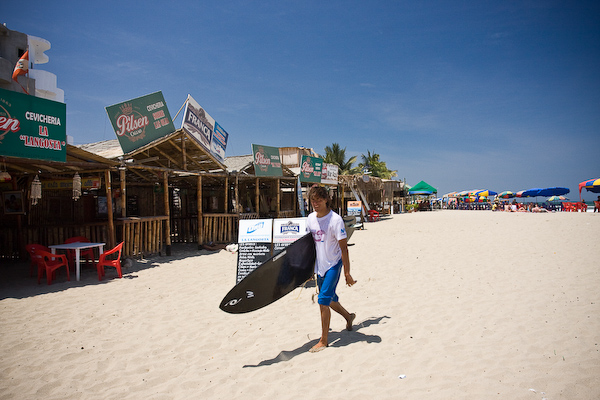 Enough surfing for one morning perhaps 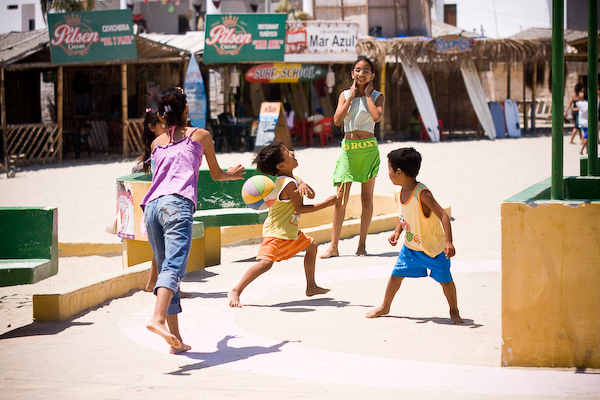 We found a restaurant and ordered a local dish, fresh fish marinated in lemon called Ceviche. It was tasty but different enough that the five of us at the table didn’t finish the two plates we had ordered. The cheapest way to return to Punta Sal was by mototaxi (tuk-tuks as far as I’m concerned) so once we’d paid our lunch bill we flagged down a couple of mototaxis (there were six of us) and we were on our way. Keryn and I were squeezed in the back seat with Sean and the return trip took about forty minutes. There were a few times I thought that the small taxi, front half small motorbike, back half rickshaw, wouldn’t make it up the hills we were climbing. It wasn’t a comfortable or fast ride but it was quite cheap I guess. 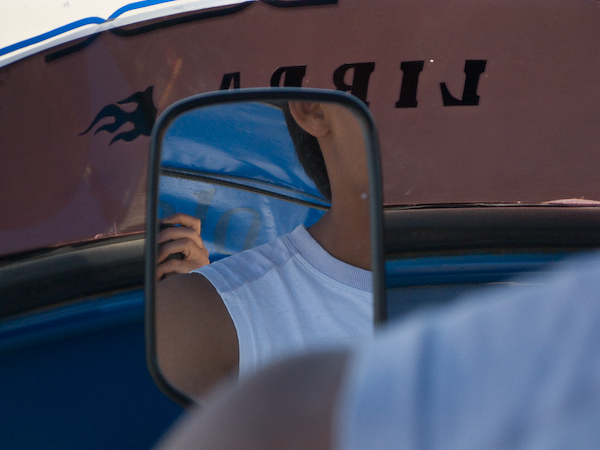 Spying on the driver while we journeyed back to Punta Sal 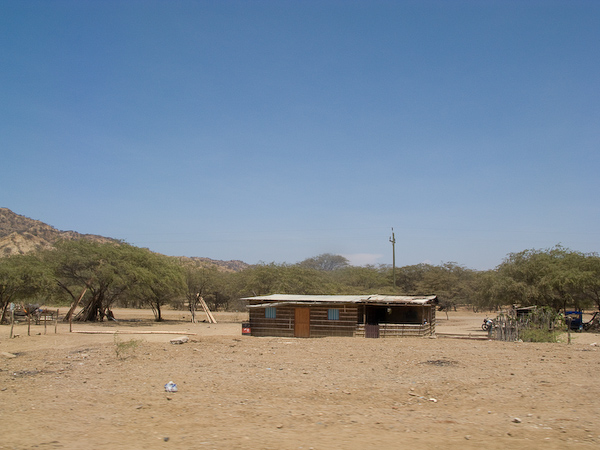 Roadside buildings spied as we slowly went back to camp

The early afternoon had us sitting in the hostal restaurant and partaking in some wine and cheese. This was a preamble to the salsa lesson most of us would be doing come 5pm. Salsa was fun though I proved yet again that dancing is not my thing. Keryn was sitting out because of her knee so I danced with Janet most of the time as we were led through the different steps that make up the salsa. Some people were quite good, Sean especially having quite the knack for quickly picking up each new move. In the end Sean led everyone around the restaurant in a conga line, a fun end to proceedings. 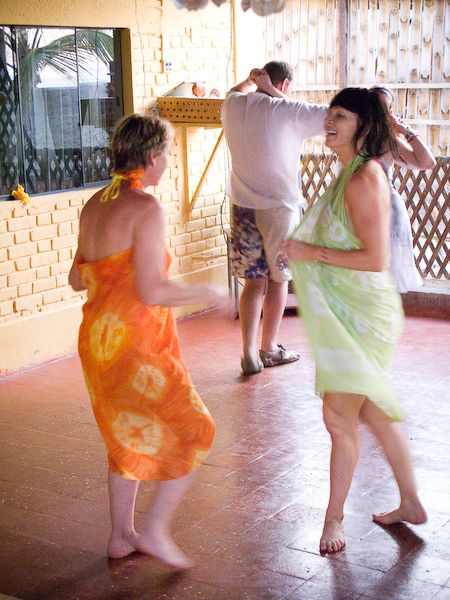 Angie and Melissa trying their hand at salsa

We followed the salsa with a bit of volleyball which ended when Sean accidentally hit the ball into Janet’s head, causing her sunglasses to cut into her nose. Next up was a dip in the sea which was nice and refreshing. There is quite a rip off the beach, we constantly were checking to make sure we were still in line with the hostal as the current was taking us down the beach. Dinner was a BBQ and very nice it was too and most people were again sitting around the campfire as we relaxed into the night. The drinking and chatting went on all night, I could hear people in the middle of the night from the tent as I went on a mosquito killing spree. Danny, Kerrie and Sophie were up with a couple of the other Irish girls. One day I’ll write about the rules and procedures (and forms) surrounding drilling rights, a strange South American truck thing, but not now I think.