We went downstairs for the group meeting and were a little confused when no-one had arrived by just past 6pm. Turned out we had our clocks set an hour early, that’ll explain the peaceful morning walk. At the real 6pm we joined with the rest of the group and Juan-Pablo (our tour leader) in the hotel restaurant and we found out about our forthcoming trip and had introductions.

This part of our trip finds us travelling with a number of couples and a mainly Australian group. We didn’t meet two of the couples till the next day but in total we have seven Australians, four Irish, two Germans and ourselves. Names will come later when I remember them.

Juan-Pablo took us out for a walk to find some food. We wandered some of the streets in the vicinity of the Hotel and came across the rag-tag remnants of the marching masses that were heading towards the city square. We joined in and followed for a distance, walking amongst the mainly white shirted citizens while overhead helicopters flew past; TV and radio crews covering the march or Police keeping an eye on the proceedings. The roads were closed to cars so people had spread out. There was no hint of menace in the crowd and we were ignored as we walked and talked, finding out things about our fellow travellers. 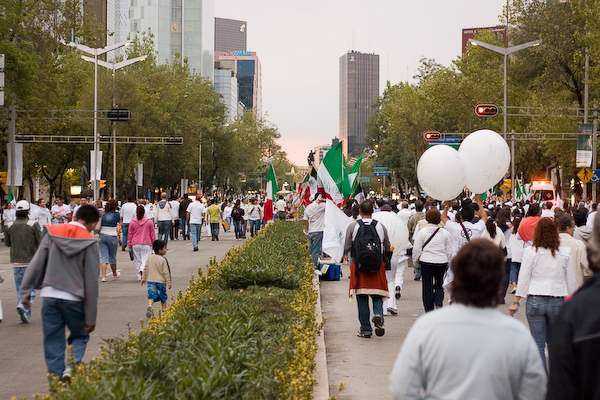 Walking with the marchers

We turned away from the march and headed down a side street to find the Taco sellers that Juan-Pablo knew of. The place was a small fast food shop nested in next to another similar establishment and the cook was behind his grill cooking various pieces of meat and other bits and pieces as we arrived. Juan-Pablo explained some of the options and most chose the simple beef taco. Thin steaks were cooked and then placed with queso (cheese) into heated tacos; flat and supple, not hard like the ones back in the UK. We could add a few extras like onion and sauces (mildly hot and hotter again). They were very tasty.

Continuing we headed for the site of a street taco seller that Juan-Pablo knew. Jose was at his usual place and we all had more tacos. I got a photo with Jose, a very friendly man happy to advertise his cooking. After finishing our food those that wish headed out to find a bar for a drink or two. 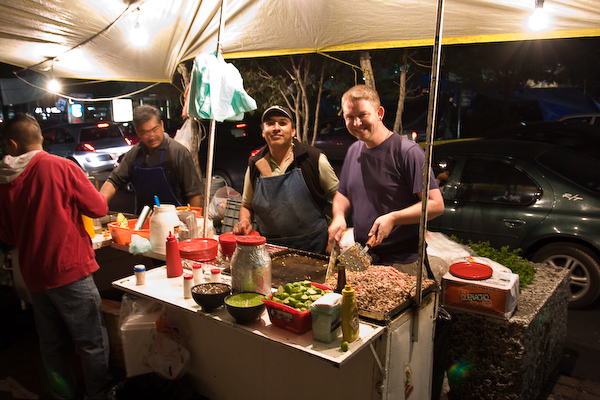 Paublo and the guest cook 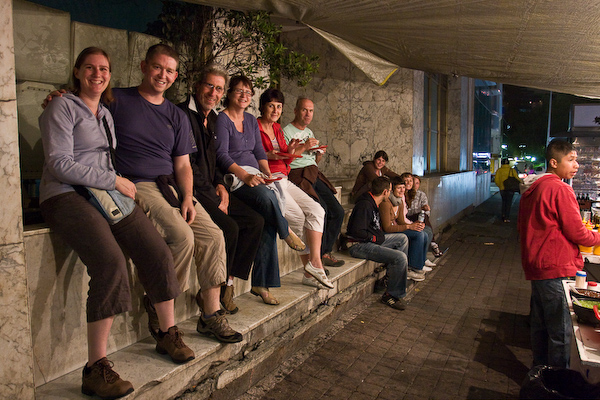 The groups first night together

More walking down unfamiliar streets took us back to the Reforma and eventually to a small bar full of the sound of loud music and chatting customers. We were squeezed into an area near the door and drink orders were taken. The woman serving us was jolly and friendly, if none too impressed at the lack of Spanish on hand (Nina, one of the German girls, being translator when Juan-Pablo was otherwise occupied). AS well as the drinks we were also given a number of trays of food; corn/pork puff-crisps, tacos and something like enchiladas. The local guys at the table behind us consumed most of the food that we tourists were too reticent to eat…much to their amusement. After a couple of drinks it was decided to head back so we made our way out and after a brief 7-11 stop it was home to the Hotel.