There were various options for our first day of the GAP adventure proper and we had chosen to visit the pyramids outside of Mexico City at Teotihuacán. This was organised through the hotel and we were met in reception at 9am by our guide for the day, Noah. There were nine of us from the GAP group including Ben and Lisa, Australians who had only got in to Mexico early that morning. We were taken in a van to a larger hotel where the group was joined by four others from other hotels. There was a colossal mix-up by the tour organisers at this point and we had to swap vans a few times before we set off. Shortly after this it was discovered that two people in our van were actually meant to be on a different tour so more van juggling took place at our first stop, the Plaza de las Tres Culturas. The Plaza is an archaeological site with three different styles of architecture on display from different periods of history. We weren’t taken in to the site, rather viewed it from an adjacent balcony. Frankly it was disappointing. 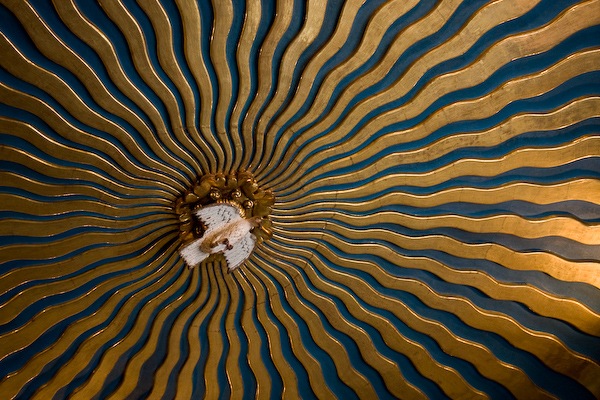 On the ceiling of the Capilla de Pocito

Driving onward we were next taken to the site of the Basilica de Nuestra Senora de Guadalupe. Here we saw a number of different Christian Churches and being a Sunday there were many Mexican’s in attendance, either for Church or to see the sights. We were led through crowds to the Capilla de Pocito, a pretty little chapel associated with an appearance of the Virgin Mary, I spotted a hummingbird at one point, flitting between flowers and hovering briefly before zooming away. We then visited the oldest church on site, the building sinking into the ground and inside apparently held up by the massed scaffolding. Lastly we entered the newest Church on the site; a massive building built in the 70’s and capable of holding over ten thousand worshipers. We joined a crowd of people pressed together and inching forward to view the displayed image of a holy relic – a cloth that showed the image of the Virgin Mark after having being used to carry some roses. The cloth was displayed behind the altar and we looked up at it as we were moved along upon a travelator, installed no doubt to keep the heaving crowd moving. Our last visit was too a shop, something I had no interest in so Keryn and I were quickly back in the van waiting for the last couple to finish their purchasing. 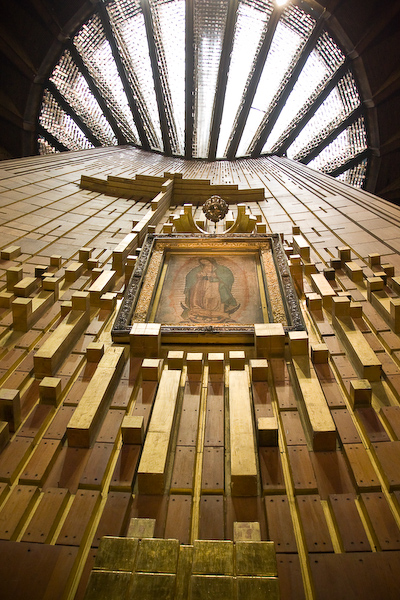 We were then onward to the pyramids but not before yet another stop, this time at a stone working shop. We were shown a few of the local plants and their uses – the source of tequila for instance. The different kinds of stone used in ancient times for icons and jewellery were displayed and then it was into the shop for a ever so quick sales pitch, a couple of free shots of tequila; once with the traditional lime and salt – the local variation being to dip the lime in the salt and squeeze the mix into the mouth before drinking the shot; secondly a sweeter tequila liquor which was sipped and actually tasted quite nice. We were then left to look around, again I chose to exit rather than bother with the inflated prices.

It was now early in the afternoon and people were getting hungry. Before lunch we were finally taken to the pyramids and they were impressive structures. Noah led us into the site and gave us some background on the two main structures, the temples of the Sun and Moon. The site was busy but the large area meant that it didn’t feel too busy, except when we were climbing the first pyramid, the large Temple of the Sun (Pirámide de Sol). 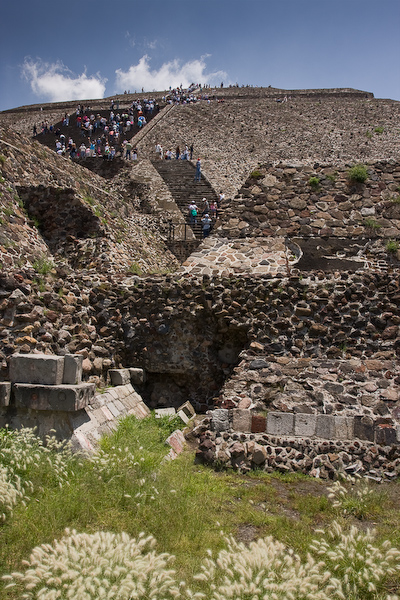 At the base of the Pirámide de Sol 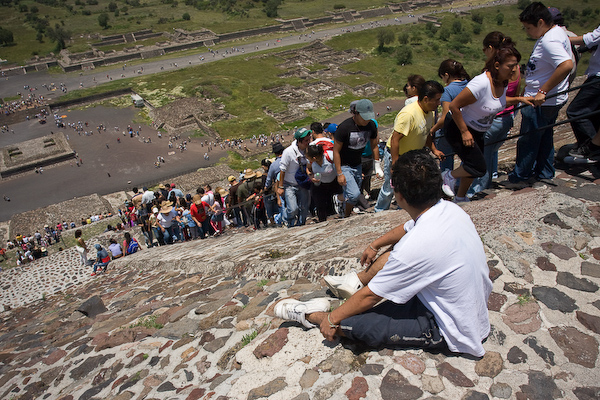 Climbing with the crowds

There were over two hundred and fifty steps up to the top, thankfully divided into sections. A constant stream of people headed up and down the steps so progress was slow but even so we found our way to the top reasonably quickly. The view at the top was good, the Teotihuacán site laid out below us, the Calzada de Los Muertos (Avenue of the Dead) leading from the base of the Sun temple towards the smaller Temple of the Moon (Pirámide de la Luna). At the apex of the pyramid a congregation of people were milling around and we went to have a look. At the centre point people were knelling to touch a point which we assumed was the exact centre – we’re not sure why. Butterflies were flying overhead and there was a pleasant breeze to keep the temperature comfortable. We admired the view for a while, took a few photos and then headed back to ground level. 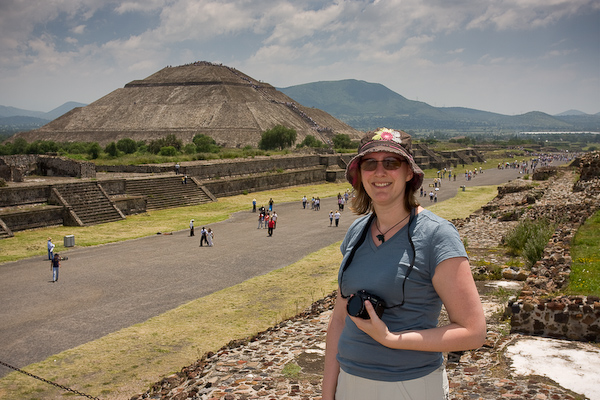 Look who I found

We walked along the Calzada past the strangely unenthusiastic sellers of replica statues, bows and arrows, cloth and whistles. Feeling warm after the recent exertion we took shelter from the sun in the Palacio de Quentzalpapálotl. Rested and somewhat rehydrated we then tackled the steps of the Moon Temple. There was only one section open to tourists, the top levels fenced off. The steps here were quite a bit larger than the previous temple and more energy was required to climb but there were fewer tourists here so it wasn’t too bad. Again we stopped at the top, relaxing with some of the others from our group and looking down the Calzada. We all headed down to and made our way back to the Palacio de Quentzalpapálotl to meet Noah at the designated time. Noah showed us a few more sights, murals and carvings and an ancient sauna. Then it was off for lunch. 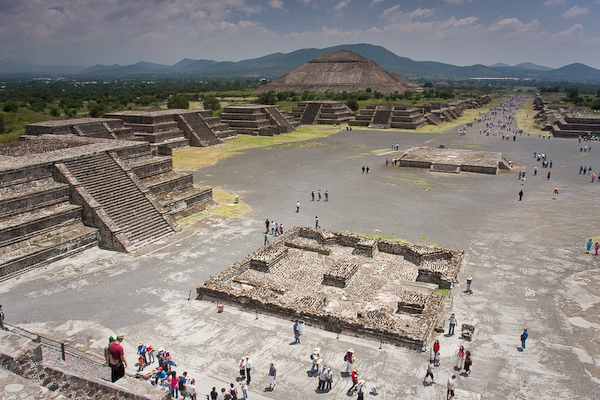 Guessing that lunch would probably be relatively expensive Keryn and I had a packed lunch but we still joined the group in the chosen overpriced restaurant, though we didn’t eat anything and drank only some lemonade that Noah bought for us. The food the others had was OK but expensive for what it was. We were entertained by a Mariachi band and then a brief display of native dancing. The very late lunch was the last part of our schedule; we were then driven back into Mexico City. It was good we had a largely disappointing tour now, we’ll try to be smarter and research any future tours rather than take the easy option.

Again we went out for a dinner of tacos, though this time the previous outlets were shut so we tried different places. There were two establishments tried, the second being the same one we had gone too on our first night in Mexico City. The food was again good and very cheap, just the way I like it. No bar for us tonight, an early start in the morning as we head to the city of Puebla.