As this is pretty much the only place on our trip through South America where it’s possible to do canyoning I had signed up for this as todays activity. Shortly after 9am I was getting kitted up along with Sean, Daniel, Janet and Angie. We all got wetsuits, spray jackets, life jackets, abseiling harnesses and finally converse lookalike rubber soled shoes. Our guides for the canyoning were Marco and Daniel. Rich gave us a quick rundown on safety and the abseiling and then we were into the Ute and driving down the road to the start point. 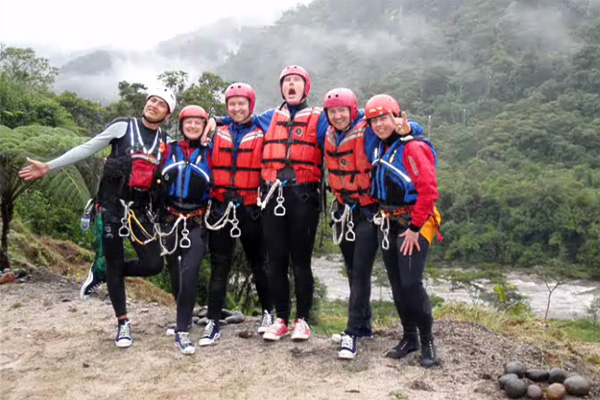 We parked up and got out and were then led up a dirt track up the side of a mountain. After about five minutes we came to a bridge and the guys checked out the water level before we continued. A short way further upstream we climbed down and found ourselves in a narrow canyon beside a fast flowing little river, the Rio Cashaurco. To start with Daniel stood at the base of some rocks, the water pushing through and down, and we went up to him one at a time. We faced away from the rocks and after a count of three Daniel pushed us backwards under the water. It was a trust exercise, we relied on Daniel pulling us back up, and it also got us wet and used to the temperature of the water which was quite cold. We all came out spluttering but smiling, ready for the adventure ahead of us. 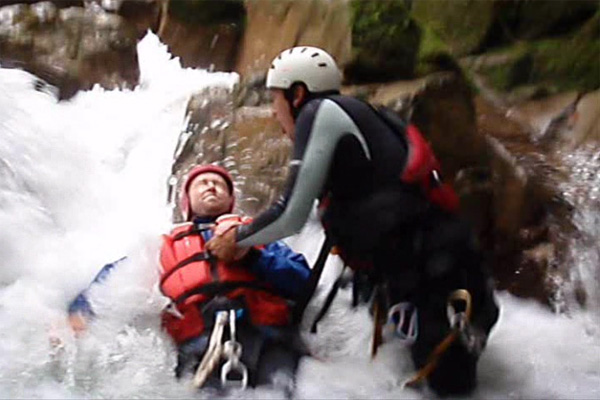 For the next few hours we made our way down the canyon either wading through the water, jumping from rocks, abseiling a couple of times and at one point using a short zip line put together by Marco and Daniel. The largest jump was probably nine or ten metres high and saw us jump from a rock platform down into a swirling pool below, following the water down a waterfall. It was easily the highest free jump I’d ever done but I was prepared mentally and on my count of three ran and jumped off arms and legs flailing before hitting the water. I was the only one to run and jump, the others choosing a standing jump from a slightly lower step. 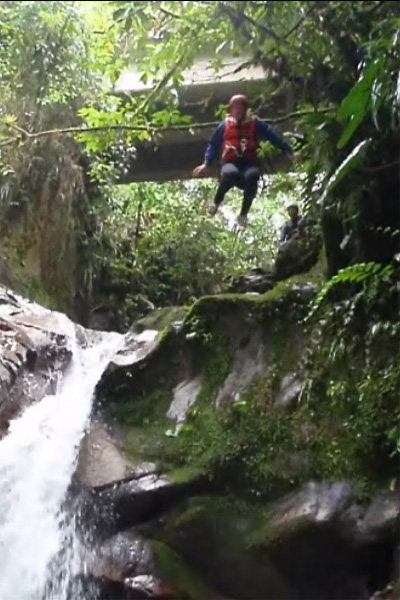 The largest jump, I think this is Sean 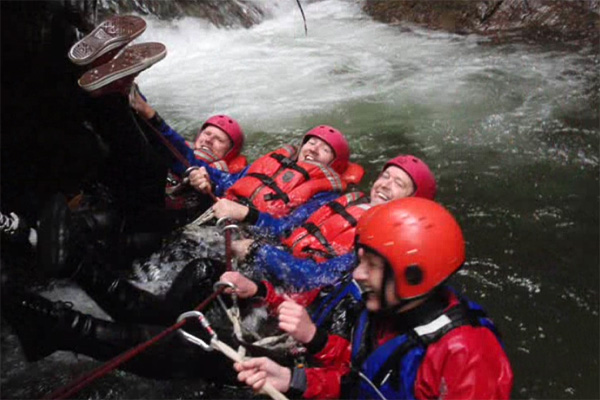 Playing in the water

There was another jump of about three metres which was a lot easier to negotiate, though I hit the water with my thighs flat on the surface and they ached a bit. A few days later I had spectacular purple bruises on the back of my lef t thigh as a direct result of this jump. The abseiling wasn’t too bad either. The first and larger abseil saw us pace down the rock parallel to another waterfall. I made the mistake of trying to walk under the flow of the waterfall and was quickly pushed back by the force of the water and off my feet. It took a few moments to right myself before continuing away from the water. No one had any issues other than a few slips. 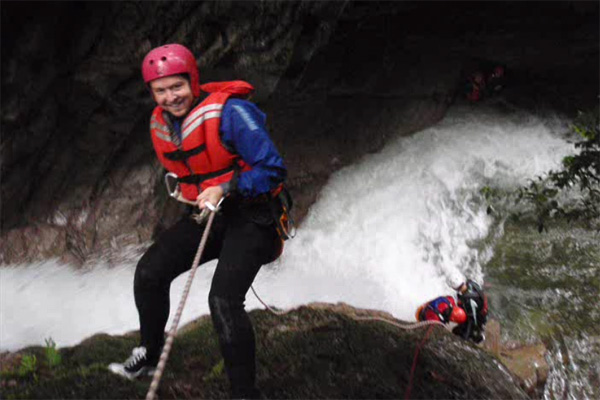 Abseiling by the waterfall

The last section we simply floated down the river and over a small fall into a larger pool. We had turns flipping into the pool afterwards, the best I could manage being a couple of head first jumps into the water. We had a group photo and were playing around when I spotted what looked to be a dead snake floating in the pool. I grabbed a nearby small stick and used it to pick up the snake which promptly came to life, coiling around the end of stick and tasting the air with its tiny forked tongue. We took another group photos with the snake and then it was released into the riverside vegetation. 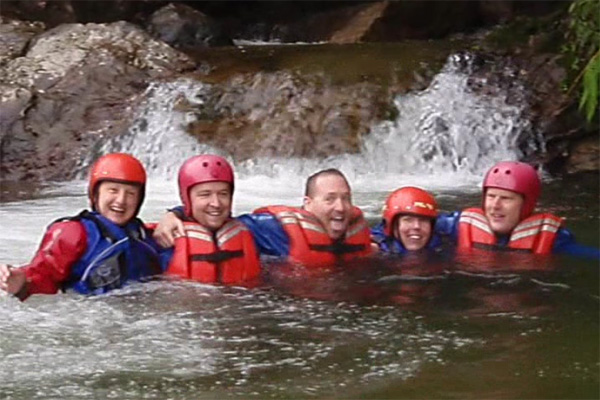 Canyoning was very much an adrenaline rush and we all thoroughly enjoyed ourselves. The hardest part was the climb back up to the road, a steep path winding through a trout farm taking away any excess energy. At the road the next group was waiting so Marco and Daniel had a quick bite to eat and then were off again.

Meanwhile Keryn had gone into Banós with the crew and a few others. On the way back to Hosteria Pequão Paraiso Keryn and Albert were dropped off so they could do some walking in the mountains. At various points along the valley small cable cars have been set up to allow the locals to cross the valley easily. Keryn and Albert crossed the valley, walked along the forest path and then crossed back at another cable car point. 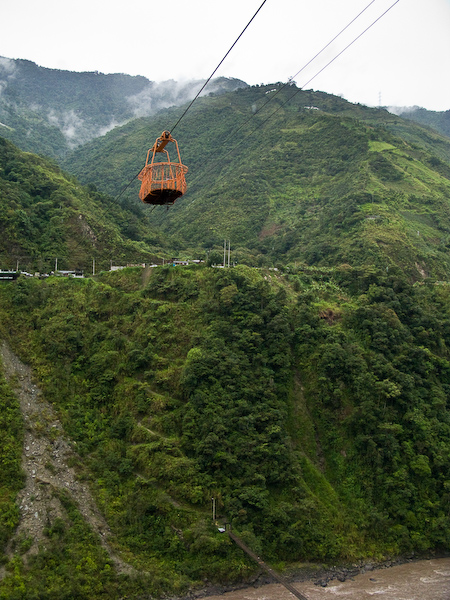 One of the cable cars

The walk was peaceful and while the weather wasn’t perfect the scenery was beautiful. They crossed streams and rivers and passed houses in small villages. The cable cars are basic at best, just an open metal basket really, and they don’t look the safest mode of transport. Returning to camp they had problems with the buses as well. The first bus stopped at a village before the campsite and then the next bus they caught took them a little too far; it was packed and they missed their landmarks. Keryn and Albert arrived back just as the rest of us were setting off to visit the nearby Diablo waterfall. 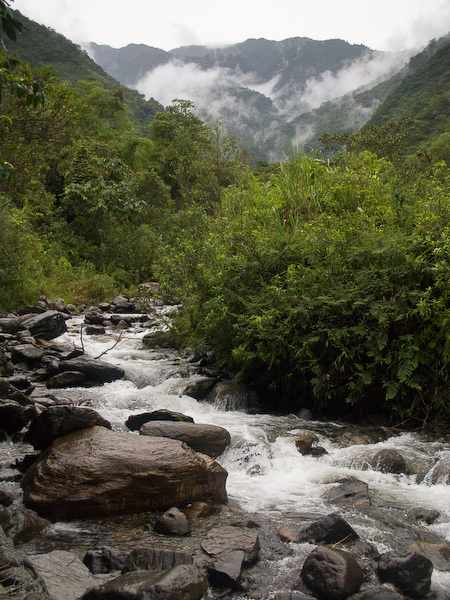 Pretty views in the mountians 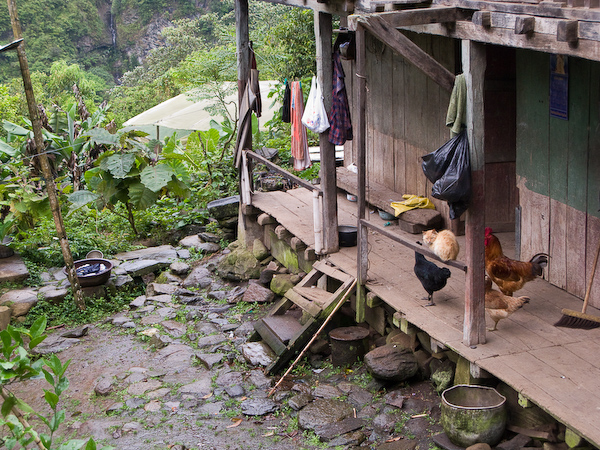 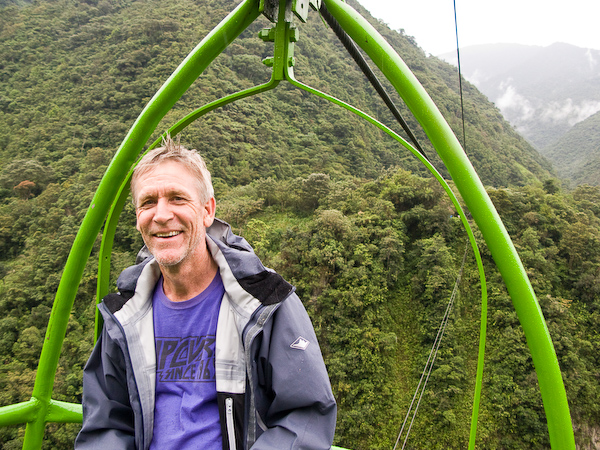 Albert on the return across the valley 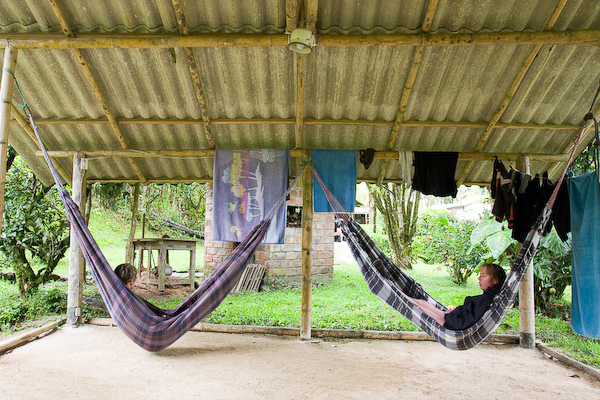 Waiting for the walkers to return

It took us a couple of hours to walk to and explore the waterfall. Firstly we took a wrong turn and ended up walking through some gardens and seeing the top of the falls where the river dropped, entering a cave before disappearing from our view. We found the correct entrance later on and walked a winding trail which took us down into the valley and eventually bought us to a swing bridge where there was a good view of the falls. The drab weather and light rain, combined with being tired, meant we weren’t really in the mood to be impressed. We paid some money to walk a trail that took us closer to the main drop, a chute where the water comes out in a torrent like a giant tap. Next to the platform a path had been cut into the rock face and it was possible to crawl doubled over, banging heads, bags and backs against the roughly hewn rock and climbing steps to come out a few meters below the chute. It was strangely dry right beside the falling water as we took a few photos but again, despite the huge volume of water shooting past it was again underwhelming. Maybe if we’d gone first thing in the morning on a crisp, blue sky day and there weren’t as many tourists around we’d have been more impressed. 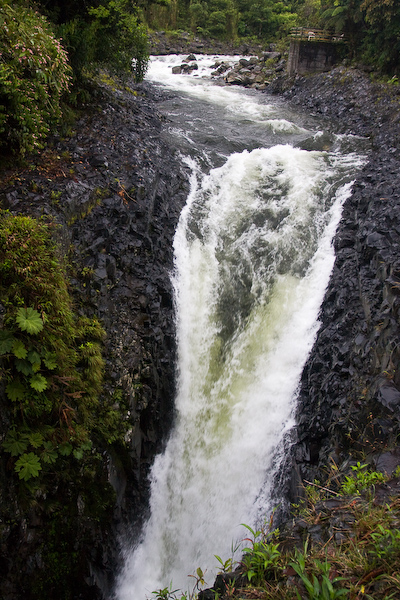 The river starts the fall 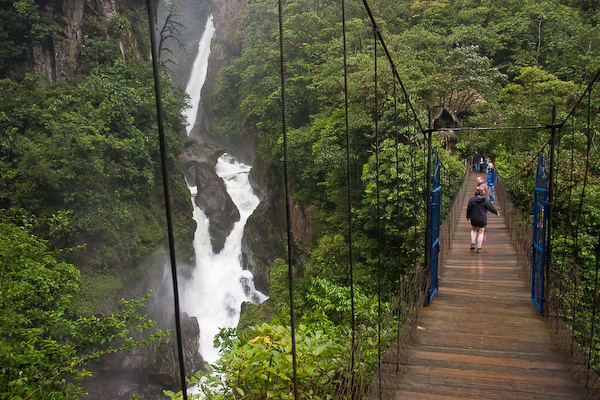 The bridge and Diablo Waterfall 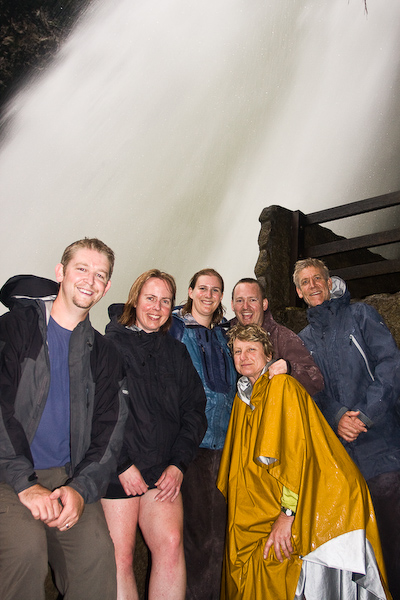 A group photo before returning to camp

The walk back to camp was tiring but it was good to arrive, have a shower and sit down with a cold drink. Dinner was a roast and very good it was too. Rich being a partying host there was more fun in the bar this night and there was even a ritual removal of the English rugby jersey that joined the many t-shirts and other paraphernalia on ceiling. A few nights later the space was taken by an Irish rugby jersey kindly donated by Kerrie.