Another day in paradise and today we went white water rafting. There were two rafts going down the Rio Pastaza and in our raft we had me, Keryn, Rhys, Vanessa and Danny. Danny and I were in the front. The other raft had Kerrie, Albert, Melissa and Sean. Much like our first rafting experience in Costa Rica this river was swollen by rain and was dam controlled with a lot of water being released. If anything the Pastaza was wilder with even less space between rapids, the water was a dirty brown and was flowing very very fast. The river was rated 4+ to 5, about as high as the ratings go.

There wasn’t a calm space on the river to practice so we went through our drills on land. Then it was into the water and away. It was probably half an hour to an hour on the water and during this time Albert came out of the other raft and we had some escapees from our raft as well. We hit a swell and Danny was flung over my side of the raft. I was already leaning back almost parallel with the water and with Danny coming across I took my foot out of its restraint and slid out of the raft, Danny following straight after. We both managed to grab the safety rope around the edge of the raft and were quite quickly being pulled back in. Our guide was very good at navigating us through the obstacles of the river and we never got stuck. The rapids were large and we hit a number of large troughs, one I remember looking like a huge wall of angry water as we came down and then crested the wave. Great fun.

We stopped at a calm spot and walked out to a tributary of the river. Walking upstream past a bridge we then entered the water and floated serenely back past the bridge. Then we were up onto the bridge and jumping into the water, maybe a five metre jump. For some reason it was much harder to jump from the bridge than from the rocks the previous day but we all managed it in the end (except for Keryn who didn’t want to risk hurting her back or knees).

Back to the rafts we went and continued down the river. On this section we had no problems, just immense fun as we negotiated the rapids. There was no let up in the wild water, one rapid straight after the last one all the way down. The only disappointment was that we had to stop after another hour, the river entering a canyon ahead and the flow too fast and too dangerous. We navigated to the bank and pulled the rafts up over the rocks. We had a group photo, the girls all standing on top of a boulder, and this was where things went a little wrong. Keryn slipped down the rock, her right (and dodgy) knee buckling beneath her. It was very painful and Keryn was mostly carried up to the road. We had to wait a day or so before we decided that no serious damage had been done but Keryn had to rest for a few days and pull out of the following dayâ€™s horse riding.

Those able helped carry the rafts to the road and we drove to a restaurant where we had the most wonderfully fresh trout for lunch. I decided it would be best if we upgraded to a room so this was sorted when we got back to camp. We then had a few hours of resting and Keryn got some ice for her knee.

Sean was next and made it look quite easy. He had the harness attached, climbed over the bridge railing to the small square of metal that constituted the jumping platform and looked quite comfortable as he surveyed the valley. The idea is to jump as far away from the bridge as possible to minimise the jerk of the rope and Sean jumped well, falling and then swinging with a huge grin on his face. 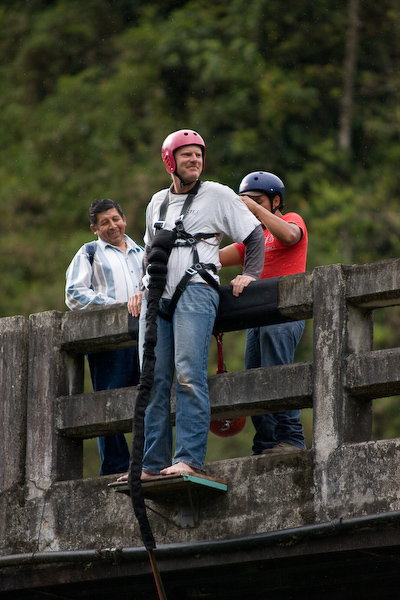 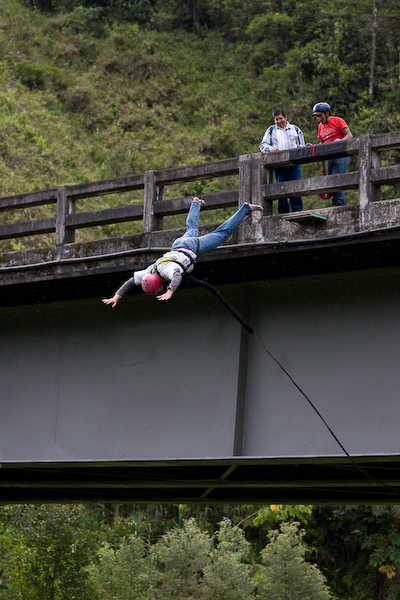 Next up was Kerrie and she had spent all the time during the previous jumps looking nervous. It took a few countdowns before she did her jump, falling holding the harness for dear life. Kerrie succeeded in making the whole think look terrifying by elating at the same time. No one else jumped in the end so it was back to camp. 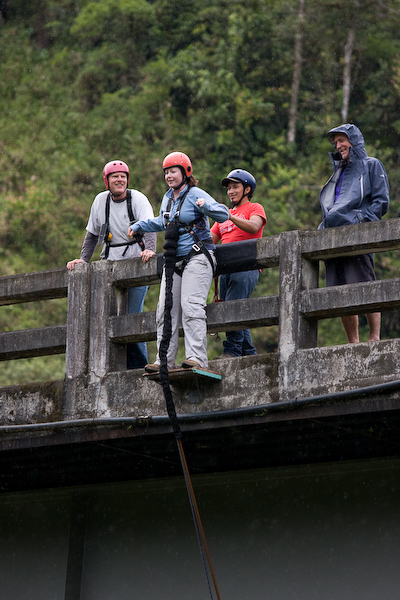 Not quite so keen on the jumping idea 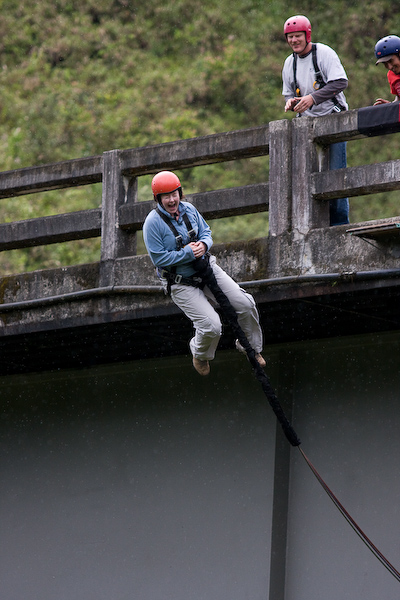 It was nice to sleep in a bed again, I reckon I’m getting a little soft. Oh yeah, another truck turned up today, a Dragonman truck going north to Quito. Strangely there were three Kiwis on board all from Hamilton. It’s a small world.