We had a couple of days in Huaraz and there was a lot to do. One group left early to go ice climbing and those of us less ambitious either spent time in the city or went for a walk. Keryn and I were in the walking group and we decided to head for the large cross that could be seen on a distant hill. Jo advised us to taxi to a cemetery at the bottom of the hill and then follow the switchbacks up to the cross for a good view over the city and the mountains that framed the valley setting.

The taxi was easily found thanks to the help of Jo’s wife and we zipped up to the cemetery. I thought it’d be nice to walk through the cemetery before we walked up the hill so in we went. The place was interesting, very European in style with large mausoleums for the richer dead and stacked coffin towers for the poorer. It was peaceful though the sounds from the city below, the cars and schools and dogs, did waft up through the crisp air. As in most Christian countries the tombs were well looked after and liberally festooned with flowers and photographs. It turned out that we couldn’t walk through to the far side of the cemetery so instead just did a loop back to the entrance. At the top corner furthest from the way in there was a burnt out hearse rusting quietly, keeping to itself as it slowly bleached and peeled away in rusty bits. I can only think that someones burial was rudely interrupted when the hearse caught aflame. 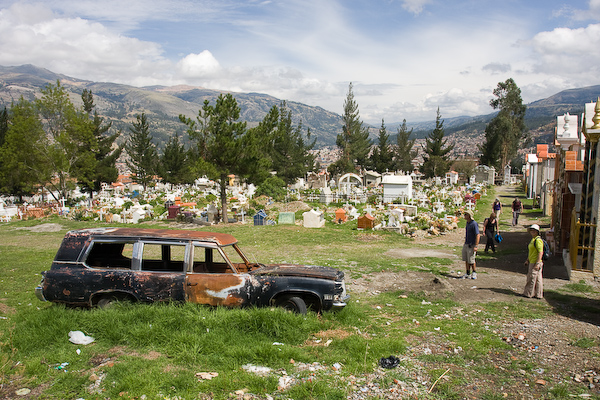 The cemetery with discarded hearse 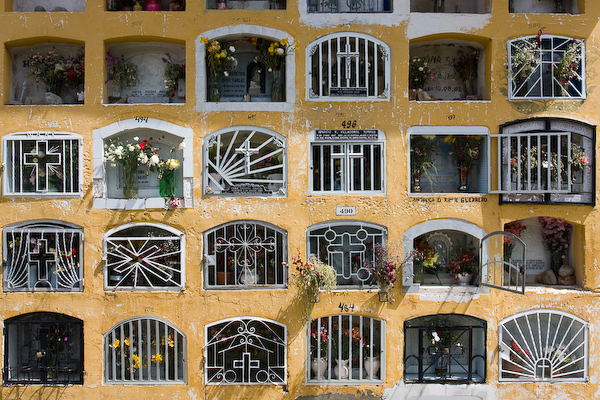 Walking back to the road Albert asked some police which way we had to go to get to the hill path and they helpfully pointed us in the right direction and then followed us for a while to make sure we didn’t take a wrong turn. Jo had said that people had been mugged going up to the cross and that while there hadn’t been any such reports for a few years it was still good to have company for a while. We passed a family walking up the hill, the two young children walking with mum and the elder boy carrying a heavy sack on his back. The police in their Ute kindly stopped to carry the kids up the next section of road and the boy was more than happy to have his load shared. The little girl who had been crying and complaining a little bit got a huge grin on her face when on-board the moving vehicle, clinging on with both hands and smiling like all her Christmas’s had come at once.

We soon found ourselves on a path obviously heading towards the switchbacks visible on the upper slopes. We were passed by a bus carrying a load of indigenous people, all in their colourful clothes and panama hats, and watched as they all got out and followed a nun into an anonymous blue building ahead. Further up the hill path we looked down and could see them all lined up, a riot of colour standing around what looked like big pools of water at the back of the building. We think it was a water treatment plant and they were having a tour, perhaps their town is getting a drinking water upgrade and they wanted to see what the fuss was all about? Or maybe they never came out and it’s all very sinister and it wasn’t a nun but a nefarious personage in disguise leading the gullible locals into some sort of trap. Or maybe I’m tired and should stick to the story as it happened. 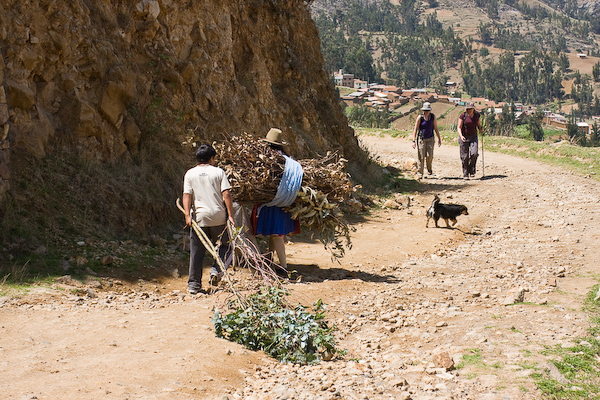 Keryn and Michelle meeting locals coming down the hill 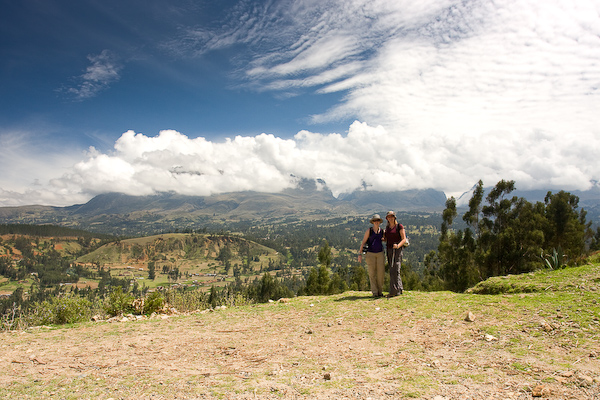 On the upwards path we passed various people coming down the hill or working next to the path. There were lots of people loaded up with vegetation which must have been culled from the forest above. There was a man and his son digging into the soil above the trail for no readily apparent reason, though the small black and white puppy with them was enjoying itself trying to run up the steep loose soil slope. We saw the cross at the turn on one switchback and thought we were close only to follow the path for what seemed an age to the far side of the hill, the shallow grade taking us the slow way uphill.

But reach the top we did and the views were good, even if the clouds were playing hide the mountains. We sat and took in the vistas, piecing together the peaks from the jigsaw pieces the clouds let us see. The cross was large and magnificent, the neighbouring shell of a building not so impressive though one window made a good frame for a photo. Some kids came up as we relaxed on the slope below the cross having taken the steep route from where we had seen the cross on the trail. They wandered around checking everything out and climbed onto the lower buttress of the cross and as we left started practising their English, their call of ‘Bitches’ was not well received. 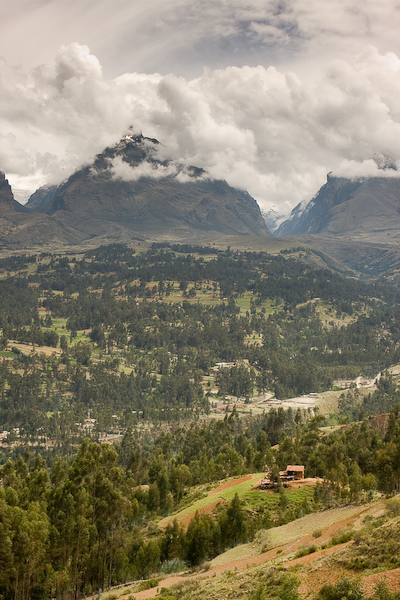 Looking to the mountains The cross on the hill

Huaraz creeps into the photo 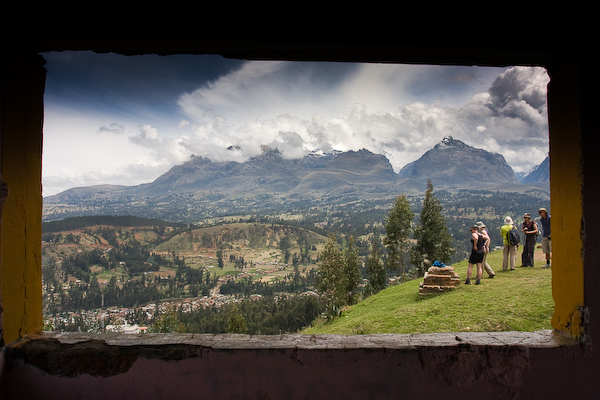 The walk down was easy and we conversed while taking in the scenery. It was no time at all and we were back passing the supposed water treatment plant where there was no sign of the people we had seen earlier. Back at the cemetery we walked around the small stalls selling flowers and watched a couple of boys playing with spinning tops; tying string around the top they would fling it to the ground and then scoop it up, still spinning, before trying to hit the other top while it was on the ground.

We had decided to walk into the center of Huaraz and so set up downhill passing shops, houses and roads which contained all sorts of things to look at; small cats in the broken gap in a wall, a large pig tied up next to a battered car in a back yard bursting with rusting machinery and rubbish, a dog panting on the road in front of a sapphire blue glass door. 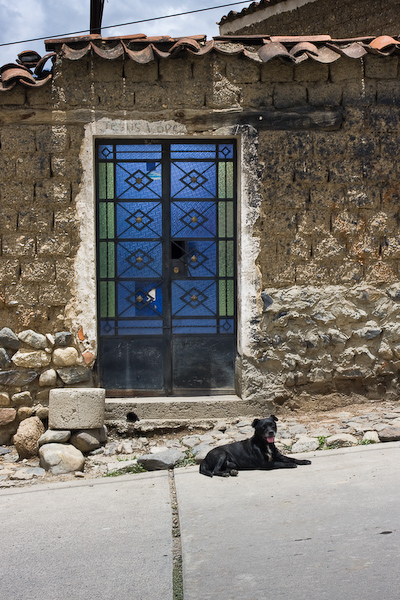 We reached the square in the town center and walked through some tourist markets which had stalls full of alpaca clothing, wooden masks, necklaces and other nik naks. In the square woman in traditional dress led their passive alpacas around touting for photo opportunities. The call of a grumbling stomach led us past all of this to find something to eat and eventually we settled on a small restaurant in a square with cheap local dishes. The food was very good, sitting next to the toilet door not such a good idea.

After lunch and some money changing and then market wandering we found our way back to the hotel. The skies were getting darker with the threat of rain as we got lost, Tranquilo no longer being parked outside the hotel and this meant our one landmark was gone. We figured it out in the end, rather than street names at each intersection here the names were placed above the street numbers marking those properties that could be bothered to have identification of some kind. 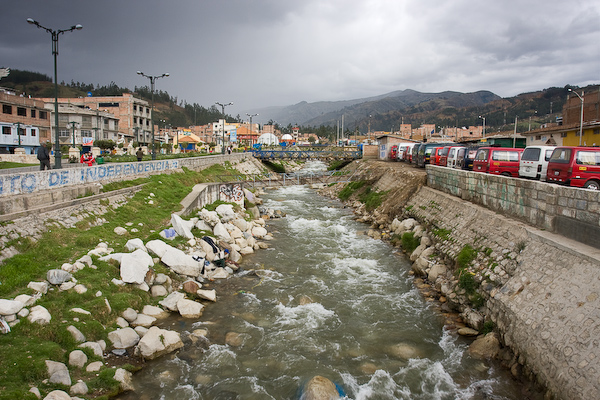 Crossing the river as the skies get gloomy

An afternoon of sleep and typing was followed by a group excursion to a chips and chicken fast food restaurant. We all ate very well and drank after our meal as the drinks order seemed to get lost somewhere between waiters. On the return walk Danny and I stopped in a bakery and as a baker himself Danny took the liberty of wandering through the back room looking at the machinery while the lady at the counter looked bemused. Needless to say after such a day of wandering our tired legs led us straight to our room for a good nights sleep.