We had a different activity this morning, a reality tour of the poorer areas of Arequipa. With our guide Miguel we were driven to a number of different places to be shown what life is like for those without much money. Normally I would expect a tour like this to involve being shown around peopleâ€™s houses and maybe taken to collectives where handicrafts are manufactured and where we would be presented with things we could buy, in some ways a glorified shopping trip with a bit of sanitised local life on display. This tour was different, we weren’t being offered opportunities to spend our money.

First of all we went to a local market and were taken through the different areas; the fruit ‘street’, the meat stalls, the flower sellers etc. One of the more interesting sections was the witch market, the area where local remedies and other things could be purchased. We saw bags of goods for sale that were intended to be bought and buried in an offering to the gods, the items buried corresponding to what the supplicant was requesting. There was also an interesting alternative calcium provider for sale in the food section. Small frogs could be bough and would be skinned and juiced to make a drink (with other ingredients) that young Kechwa consumed to boost their calcium levels. Most Kechwa are lactose intolerant, the people not having cows hundreds of years ago and only slowly developing the tolerance for this relatively new liquid. 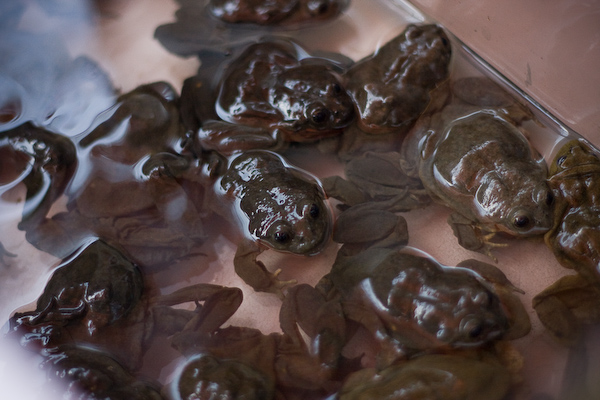 Moving on we drove out of the city to an area where the local white volcanic stone is cut into bricks for construction. The bricks are primarily used by the lower classes who cannot afford to pay much. As such the price of bricks stays exceptionally low which means there isn’t much margin so there is no room for costly machinery in the brick cutting, the bricks cut from tall cliffs by hand with chisel and mallet. This is the lowest paid job a person can do and there isn’t much chance for an improvement in either conditions or pay unless the whole populace gets richer. Accidents are not uncommon and the workers are in the job for decades unless they can find something else to do. Miguel explained how he is trying to help, training young people to carve statues and trinkets from the large piles of stone off cuts that can’t be used for bricks. A small statue could sell for as much as ten times the cost of a brick, bringing in more money for lesser volume. 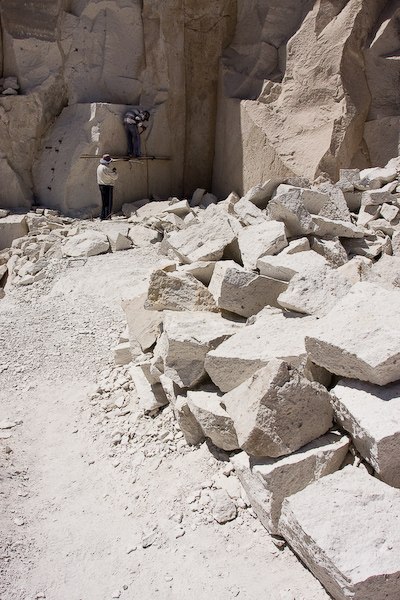 Miguel doesn’t believe in handouts, foreign aid, overseas volunteers and the like. He would rather help those who are already helping themselves, improving the lot of people already trying to do better for themselves. For the stone cutters this includes initiatives such as the off cut carving training. It’s a philosophy along the lines of the old saying “you can give a man a fish and feed him for a day or you can teach a man to fish and feed him for a lifetime”.

Later on we visited a Kechwa woman’s restaurant where Miguel has provided assistance to an already working business. Here older single woman priced out of jobs in the city and without other means have set up a restaurant. Each putting in money they work on a schedule, working for a week in the kitchen and getting free food while working, when not working each woman gets a discounted meal. Profits from the restaurant go towards the group and to keeping the business afloat. 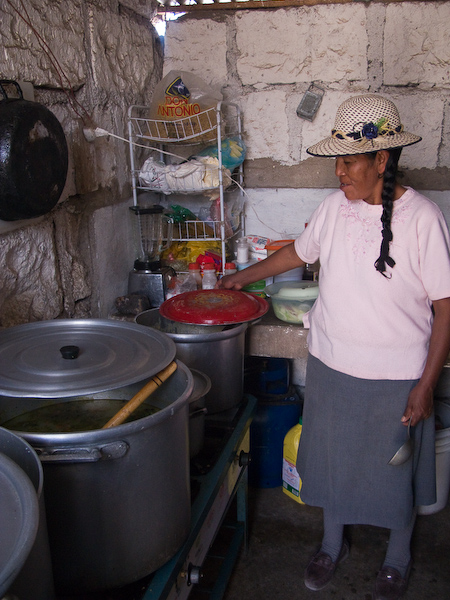 Working at the restaurant

Another place we visited was a crÃ¨che for the children of single woman. The women are able to leave their children at the créche and go off to work and the children are safe from the dangers of a town with high unemployment. Miguel’s charity helps pay for the upkeep of the créche, in doing so allowing the woman to work. The support comes for a year, then Miguel will support a different créche is a different area. The hope is that the woman working will have found their feet and continue to be able to run the créche when the extra support ends. 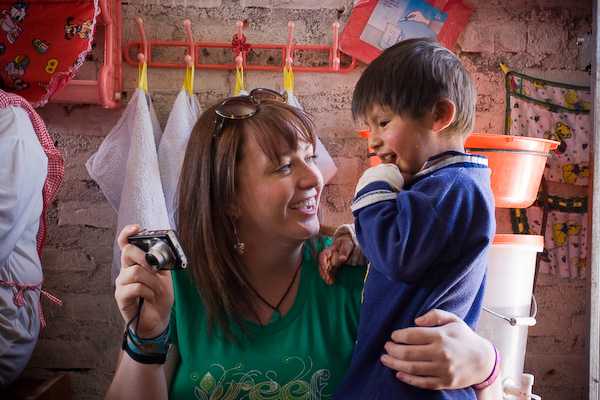 Erika with one of the créche children

We also visited a cemetery seeing the graves of the young, the old, those who took their own life and the graves of children who died without being Christened. Each area pointed to different issues; the suicide rate amongst young people was high in the poorer areas, the youth unable to see prospects for their future and old feeling as though they are a burden that the younger generation could do without. The youngest die in the harsh winters and when there is no food because there is no money, no heating, no health care available for those who cannot afford it. 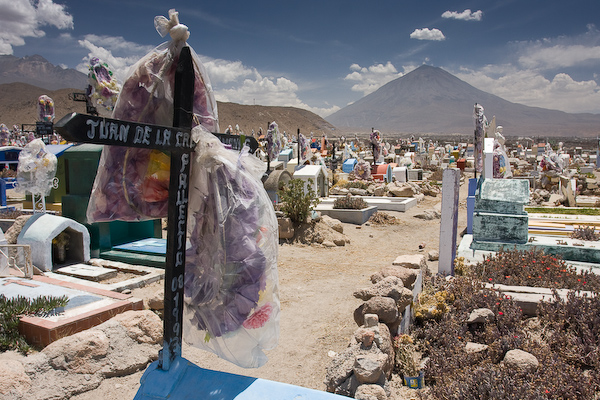 It was easy to feel depressed about the whole situation but Miguel was upbeat; Miguel loves Peru and is doing his upmost to help the Peruvians of Arequipa and beyond help themselves. Discussion raged among us on the trip and those back at the hotel as to the pros and cons of the activity and the methods being used to help these people.

We had lunch back in the city after returning to the hotel. We then went to a local museum, Museo Santuaios Andinos, to see the mummy called Juanita. Juanita, named after the man who discovered her Johan Reinhard. The mummy was found near the summit of Mount Ampato near Arequipa in 1995 at a time when the eruption of a nearby volcano caused the usual snow cap to melt away. As she had only recently been released from the snow and ice Juanita was in excellent condition and now she is housed in a special refrigerated display case for visitors to see.

We arrived at the museum just as a tour was about to start. We paid our fee, put our bags in storage and then joined the tour. First we watched a National Geographic video about the discovery of Juanita which also included a reconstruction of the probable events leading to her death on the mountain. It is supposed that Juanita was a willing sacrifice to the Gods to appease their anger, possibly following an eruption or other natural disaster. Analysis of her body has shown she died from a single blow to the head, sacrificed following a ritual on the summit. The documentary explained how the people managed the climb to the mountain top and showed the length of time such a journey must have taken – months of preparation and travel.

After the documentary we were led through a small museum dedicated to Juanita and the artefacts found on the mountain. We saw Juanita in her case, it was eerie staring at her face, wondering what she went through, her thought processes and beliefs.

Outside in the warmth of the sun we did a little shopping before reporting to the truck, this afternoon we were leaving for the town of Chivay near the Colca Canyon. In the four or so hours of travel we saw a lovely sunset from a high pass and also saw plenty of wildlife, mainly alpacas and vicuña (a close relative of the llama and alpaca which has very fine wool). We arrived in the evening in Chivay and put our bags in our rooms before all heading out to dinner. We rather overwhelmed the restaurant and the food took a while to arrive. Thankfully it was very tasty. We would be visiting the Colca Canyon to see if we could find condors the next morning and would be leaving early, so most people went to bed straight after dinner. 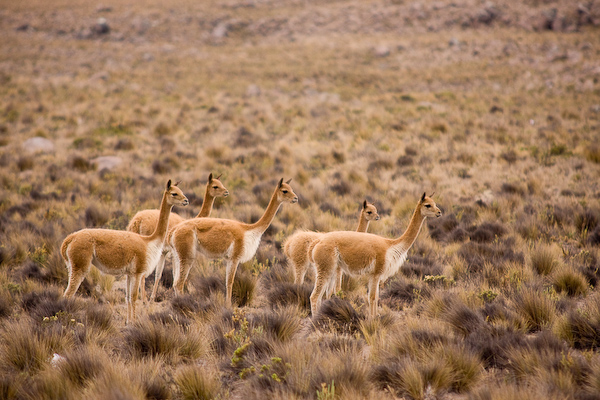 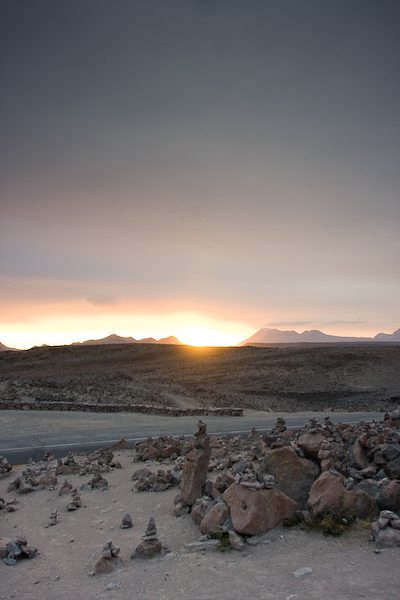 Sunset at the high pass