The Monasterio de Santa Catalina was our first call today. The Monastery was started more than four hundred years ago and was set up as a self contained city within a city for the resident nuns. For hundreds of years the nuns lived a life separate from the outside world, communicating only with family through portals that allowed no visibility, only sound to be exchanged. The turbulent history of the Monastery is briefly explained on Wikipedia, the Monastery being opened to the public in the 1970. A small group of nuns still live in the complex but during visitor hours seclude themselves away. 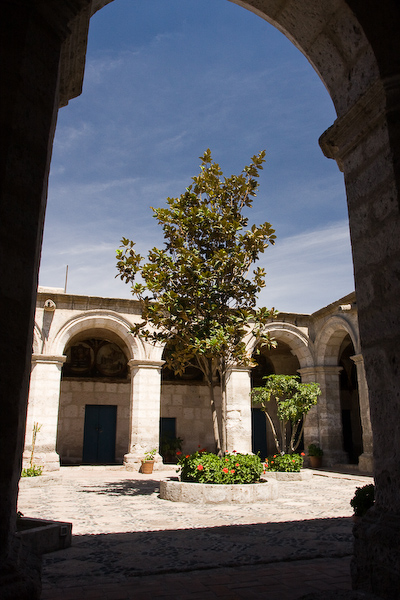 A courtyard at the Monasterio de Santa Catalina

A small group of us went to the Monastery for 9am and we asked for an English speaking guide. For the next hour and a half we were shown around some of the complex, looking into rooms, visiting the washing area, the chapels and being given lots of interesting information of the life led by the nuns. The architecture was wonderful, high domed ceilings and walls of rich reds and blues. The numerous courtyards had paintings and carved arches on each side and there were lots of trees and flowers. The nuns lived in quite large rooms or even houses, often paid for by their wealthy families (until the reforms came in and the wealthy were sent home). We also bumped into Angie and Janet who were also wandering around the place on their own. 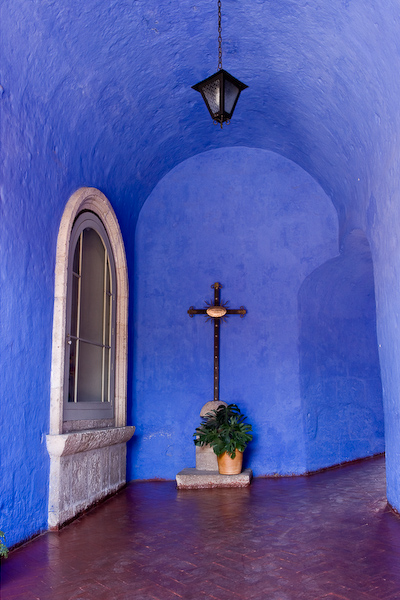 An example of the intense blue walls 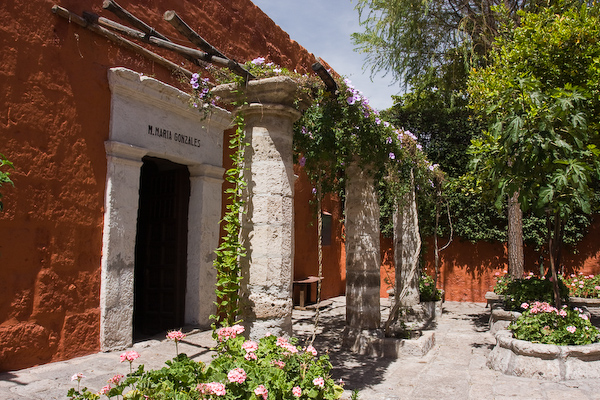 A garden outside one of the old houses 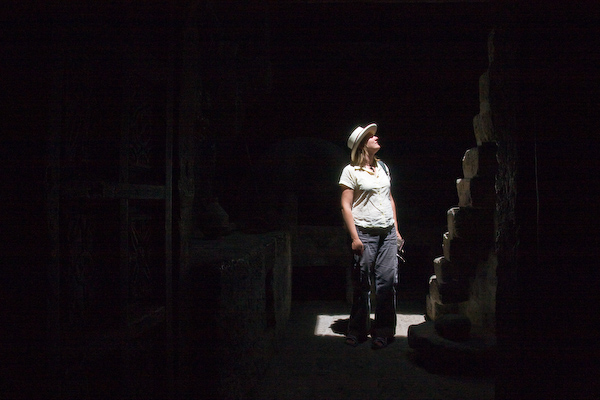 Keryn in the kitchen of one of the houses 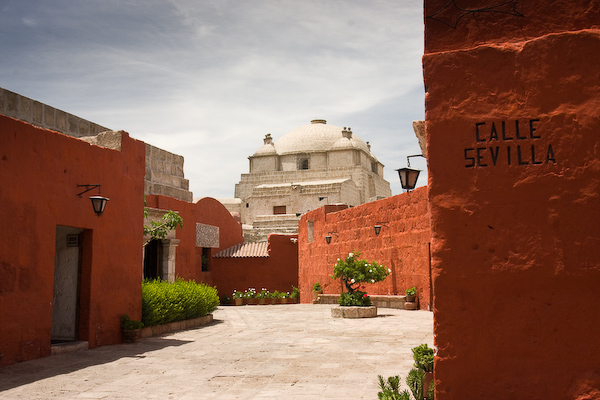 Looking to the Chapel

After the guided walk I spent a few minutes walking around and taking some extra photos. It was a beautiful place and I think it would take a long time to explore every nook and cranny. We missed seeing the guinea pig runs behind one of the kitchens, Angie and Janet had found it, and I wonder what other interesting sights we missed out on. 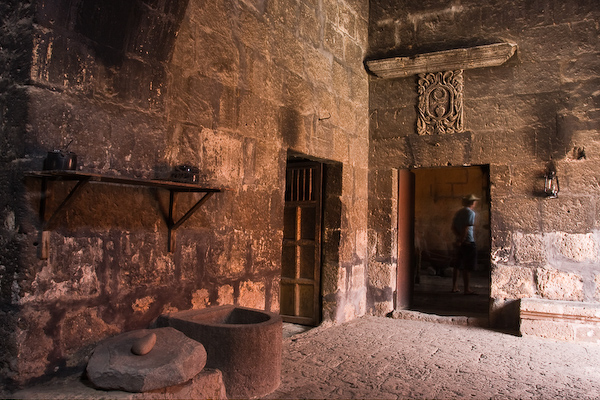 In one of the kitchens 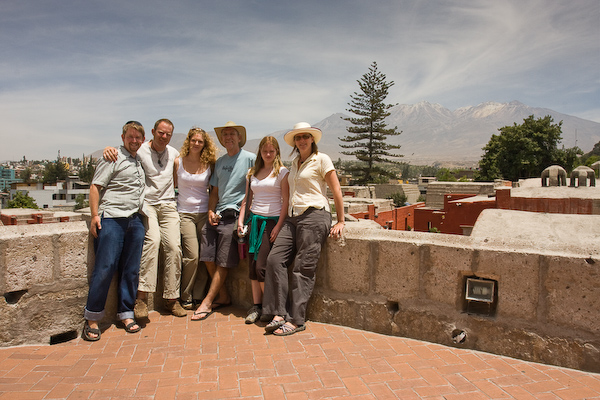 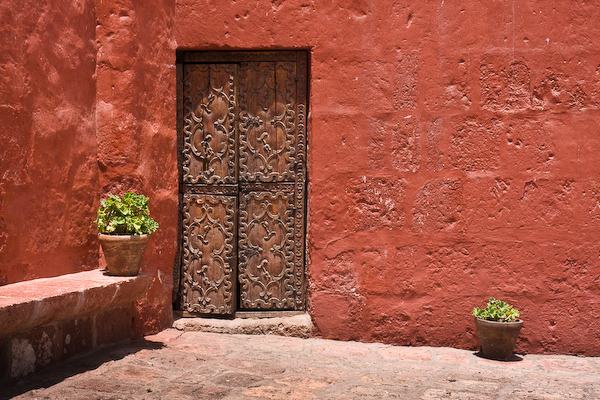 We walked back into the centre and looked at a few shops around the plaza. Keryn and I spent time looking at shops on our own and found a good t-shirt shop where I bought two Looch shirts with an ecological theme. One of the shirts was all about mother earth (Pachamama) needing to be saved. Upstairs in the same shopping complex there were some expensive local artworks for sale. We were captivated by some tapestries made by Maximo Laura but rather put off by the 10000 soles price (around £1600). 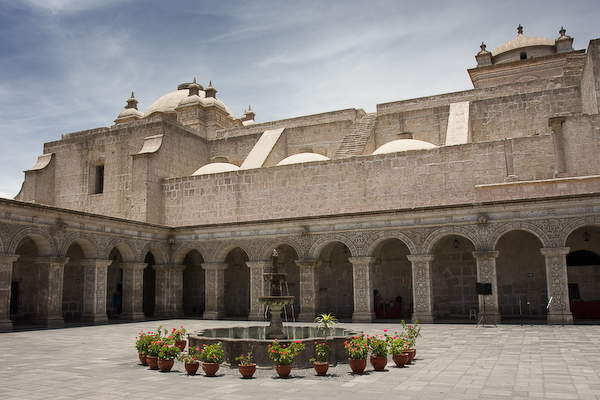 One of the many courtyards in Arequipa

We had lunch in a nice restaurant down a pedestrian street that is in between and runs parallel to our hotel and the cathedral. The food was good, we had a roof top viewpoint of the cathedral and there was some good Peruvian music being played by a band in the street below. Before eating we had stopped to look at the pendants and other jewellery that a Kechwa (the descendants of the Inca) man was showing on a small rug in the street. Keryn ended up purchasing a sun pendant after having bargained the price to an acceptable level. The man, whose name was Sinana (which is the Kechwa word for Port) we think, was dressed in traditional Incan clothing with a colourful cape and clothing, a headdress of feathers and large copper wrist plates. He was very friendly and helpfully swapped the twine cord on the pendant for another colour that Keryn preferred. He also shortened the cord to the right length and then posed for some photos. Sinana was the most accommodating person we had bought anything from on the trip so far I think. 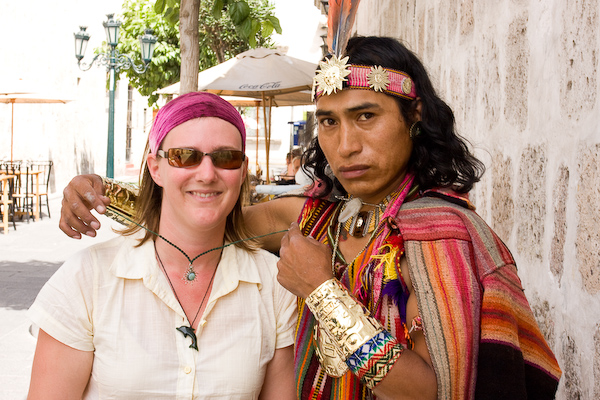 Sinana, Keryn and the pendant 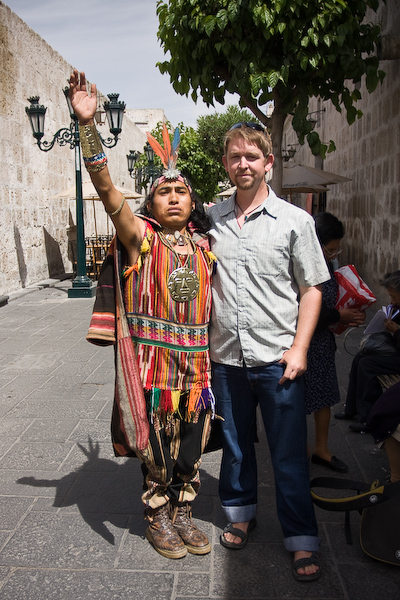 We wandered around the plaza around sunset and watched a couple of street performers in a city square. It was a pleasant evening and almost a pity we had to return to the hotel to join the group for a meal. The evening had nearly the whole group attending a meal at a restaurant Zig Zag that produced high quality Peruvian dishes with a little bit of an international twist. Most of us opted for the trilogy of meats, a thick steak of beef, ostrich and alpaca which came on a hot plate to be cooked to the diners liking. Keryn and I shared a trilogy and it was divine, the best meat we’d eaten on the trip so far and probably the best we’ll have until we get to Argentina. The deserts were equally tasty and we all left the restaurant full and content. Arequipa is becoming one of our favourite cities so far on the tour. 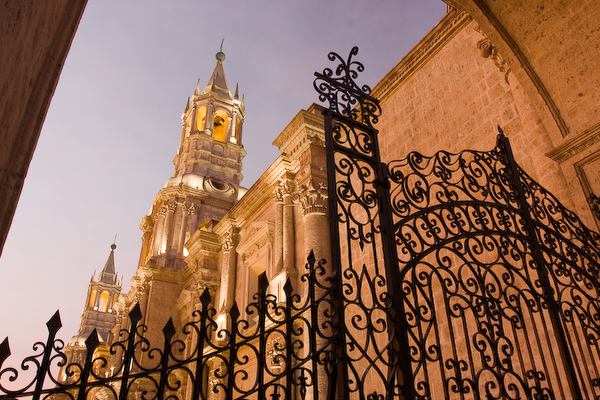 The Cathedral in the evening