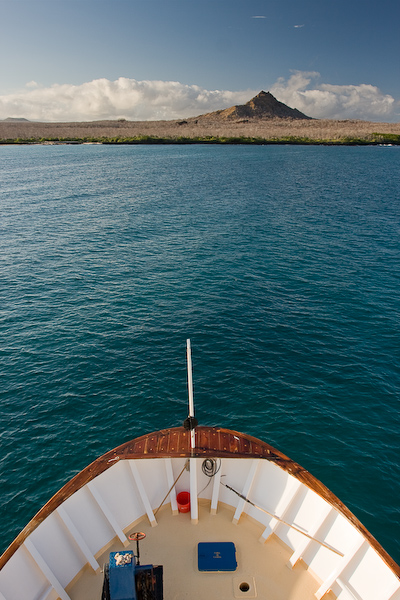 The view to Isla Santa Cruz 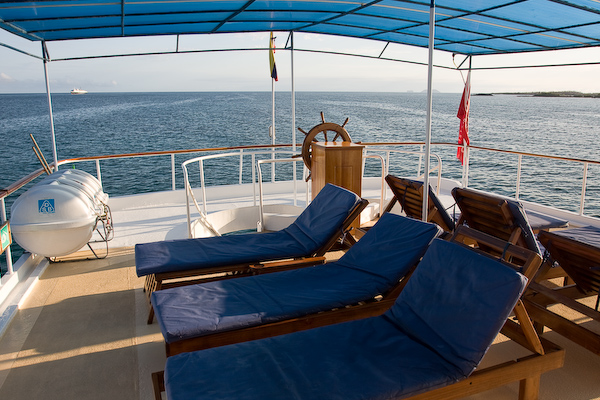 Exploring the boat: the sun loungers

Breakfast was at 7am and I was up before this having a good look around the boat and checking out the view. The nights travel had bought us around Isla Santa Cruz so we were now moored off the north western coast of the island. The ocean was a deep blue all around and in the distance could be seen more islands. Santa Cruz was ahead of the boat and we could see a small yellow sand beach and beyond tree covered landscape rising gradually to a peak. The trees were all grey, appearing like a dead forest. Boobies were flying by in loose formations, occasionally peeling off to dive headfirst into the ocean after fish. A short distance away there was a lump of something in the water. The crew told us this was sea turtles mating and as they drifted closer we could see this was the case. 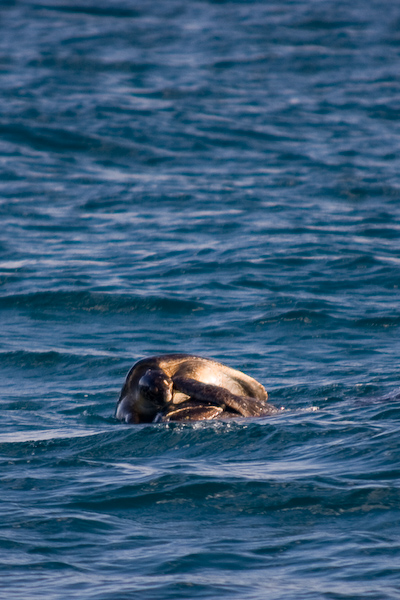 Turtles mating in the morning 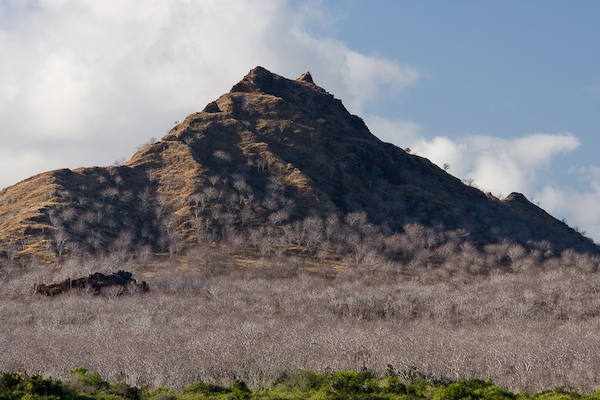 After breakfast we loaded into the dinghies and took the short ride over to Isla Santa Cruz, the landing site was referred to by the name Cerro Dragon. Our island visits over the next few days would be a mix of dry and wet landings, the wet normally us coming up onto a sandy beach and wading through the last bit of surf to get onto the shore. This time we had a dry landing, rough steps carved into a spur of basalt. On the way over we diverted to watch a whirlpool flock of boobies circling around and along the shoreline. They would circle around and around and then a section would start diving into the water, obviously chasing after a school of fish. It was exciting watching the birds diving after fish in such large numbers, the noise of their entry loud and the splashes looking like someone was strafing the water with a gun. 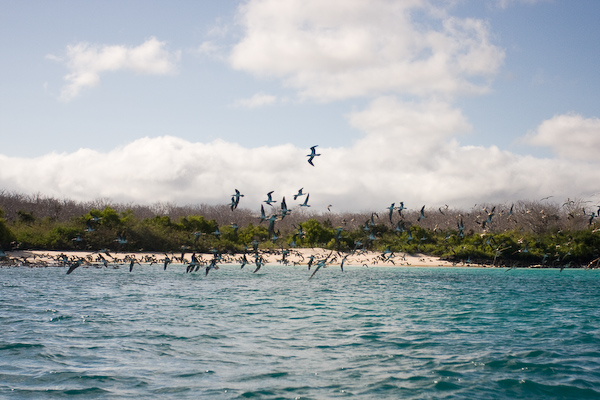 We landed and walked onto a small beach where Wilo gave us some information on the island. We moved on when we saw a number of other boats heading to the shore, not wanting to be caught up with other groups. This island looked more alive up close with large Opuntia Cactus trees and low vegetation holding much more colour than was visible from offshore. We came across a lagoon, mostly dried up, and Wilo explained that in the wetter season flamingos can be found. We saw some marine iguanas off in the distance, black lizard shapes appearing above the similarly black rocks. 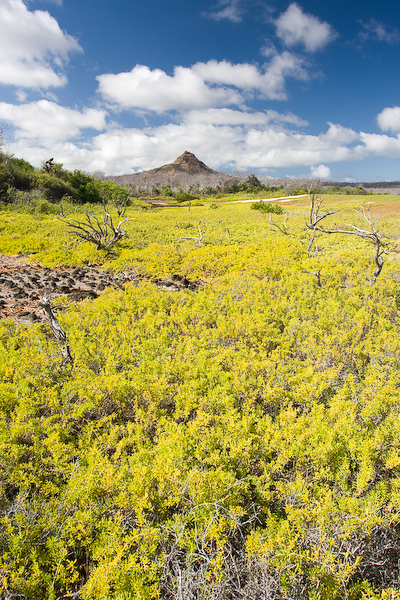 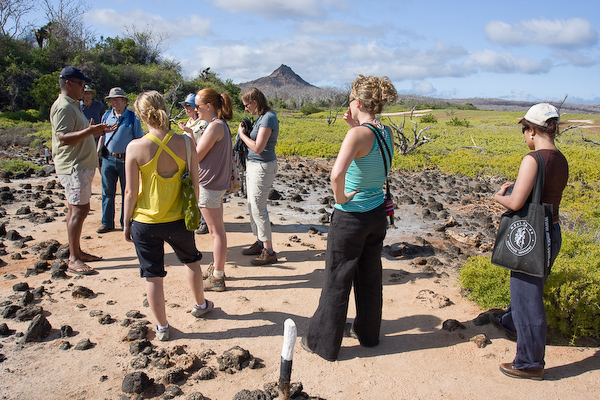 Wilo talks about the island 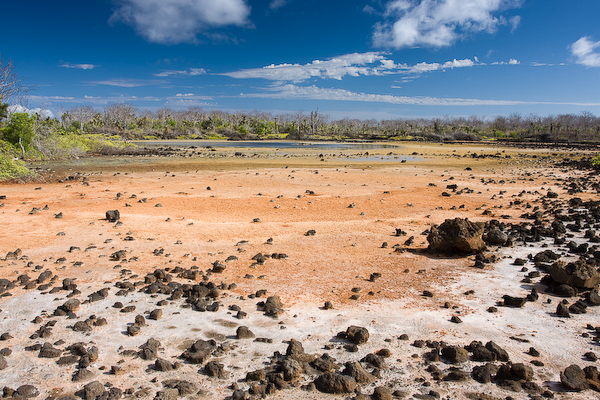 Heading inland the next wildlife was found underneath a low tree. The land iguana was large and orange, these animals changing colour as they get older. He sat under the tree and watched us while Wilo talked about the species and its habitat. We were able to get very close, the iguana only getting a little uncomfortable after quite some time. Nearby a Galãpagos Mockingbird sat in a tree and submitted to a few photographs being taken. On most islands we also saw various varieties of the famous Galãpagos finches that helped Darwin with his evolution ideas. 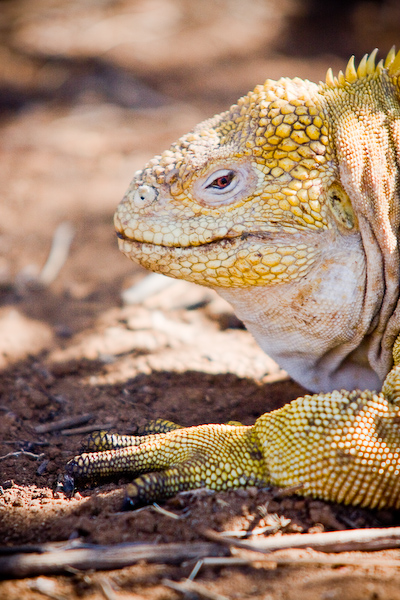 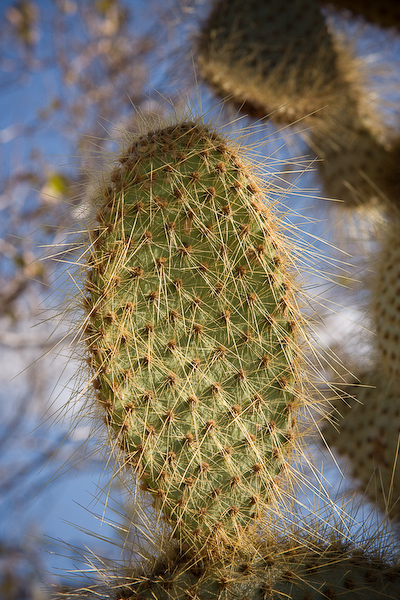 Further walking too us to a higher viewpoint, more iguanas seen on the way. We were now seeing more groups of people from a National Geographic boat much larger than our Adventurer, thankfully everyone mostly kept out of each others way or soon moved on if we were trying to see the same thing. From the viewpoint we could see out to the ocean over the forest and off to the distant islands. 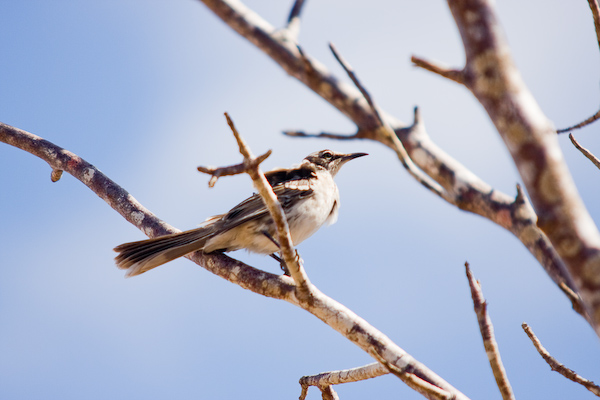 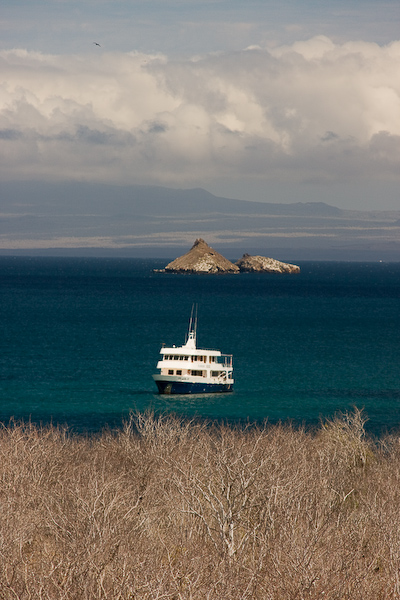 Looking out from the viewpoint

Walking down from the viewpoint we took a rocky road back to the shore, appearing on a different beach to the one we had arrived by. We sat and waited for our pickup, looking at the red crabs all over the shoreline rocks and seeing turtles and the odd sea lion swimming by in the clear water. Soon enough we had a wet pickup and were back to the boat which also goes by the more proper name Lobo de Mar III. 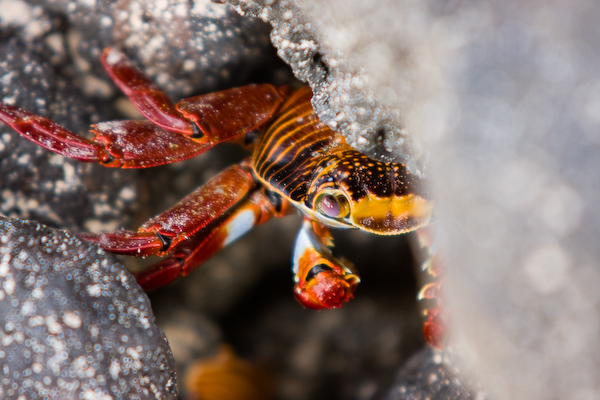 A red crab hides in the rocks 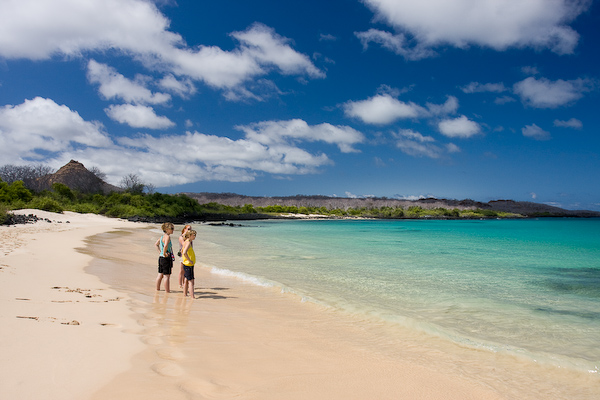 Siobhan, Denise and Sarah on the beach 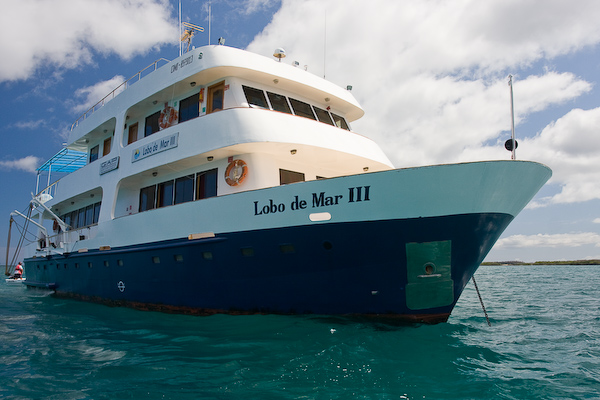 After lunch we set sail for our next destination, Isla Rãbida. A wet landing in the early afternoon bought us onto the only red sand beach in the Galãpagos. We had a short walk up to a viewpoint above the beach and we had views over the ocean and the island interior. It was interesting to see the peaks of the island, the trees on the island grey at the bottom and getting greener nearer the top what with the wetter conditions of the peaks. 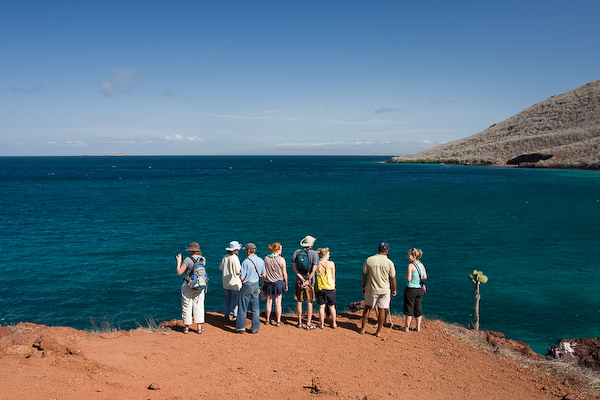 Looking out on Isla Rãbida 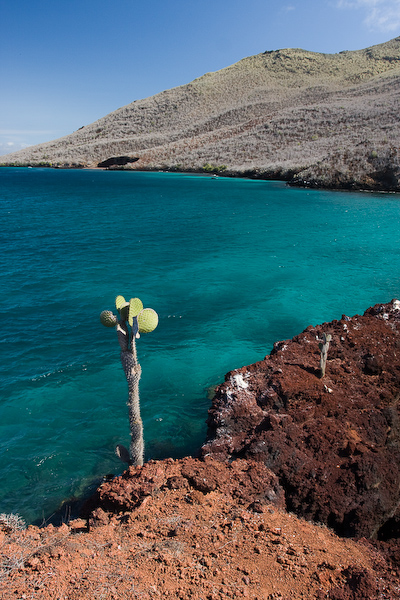 Changing colour on the slopes of Rãbida 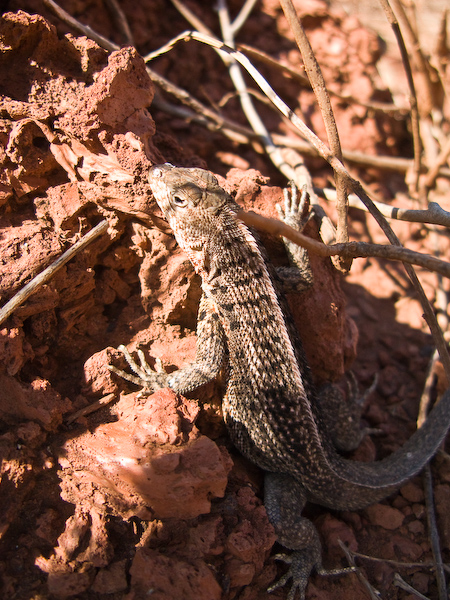 Heading back down to the beach we got ready for some snorkelling. We had all rented shorty wetsuits so struggled into these before making our way to the water. Those of us a bit slower had to wait for the local bull sea lion to move away from the water at our entry point; Eric had told us a story of another bull sea lion on a different beach the previous day chasing people out of the water. The bull was large and loud, calling out to let us know this was his beach. He seemed to wait a short while before deciding we were no threat and heading back down the beach, allowing us finally to start snorkelling.

The water wasn’t as cold as I’d expected but the wetsuit was still good to have, providing buoyancy and also added protection from sunburn. We followed the short rocky cliffs around the shore and saw lots of fish in and around the boulders and rocks underwater. There were lots of little schools of fish in the spaces between rocks and quite often one larger fish also sharing the same space. In many places small black fish would chase out the larger parrot fish from their area, fiercely territorial. 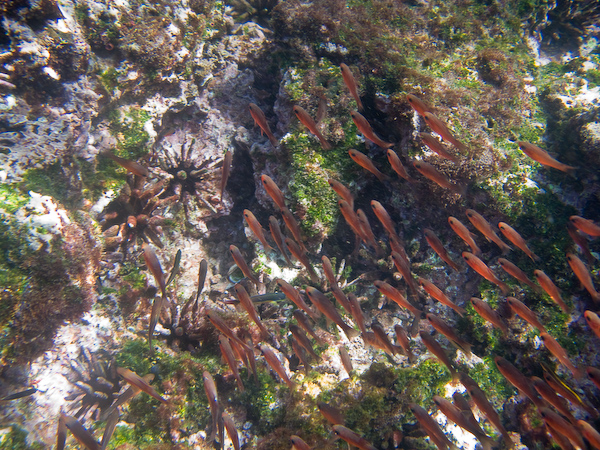 Small fish in amongst the rocks 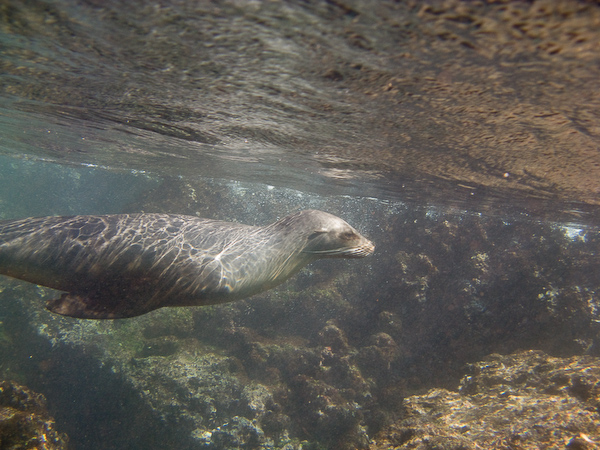 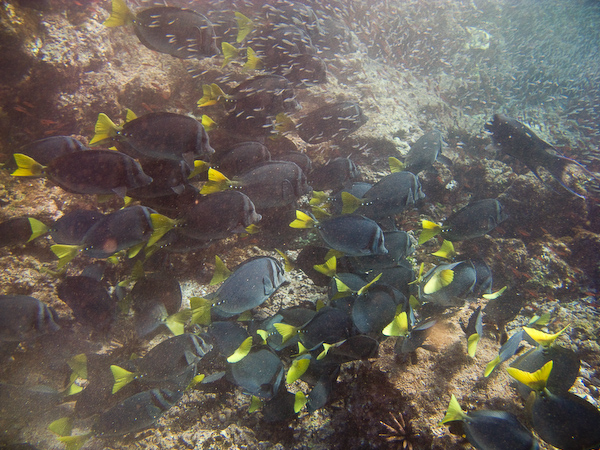 There were a few schools of larger fish swimming around, grazing as they moved. A lone sea lion passed us on the shore side a few times, checking out the people in her water. Keryn and I also saw a large white tipped reef shark heading away from the group but we weren’t organised enough to get a photo. That would be the only shark we saw while in the water. We had around an hour in the water and it was good but only a taste of things to come over the next couple of days. 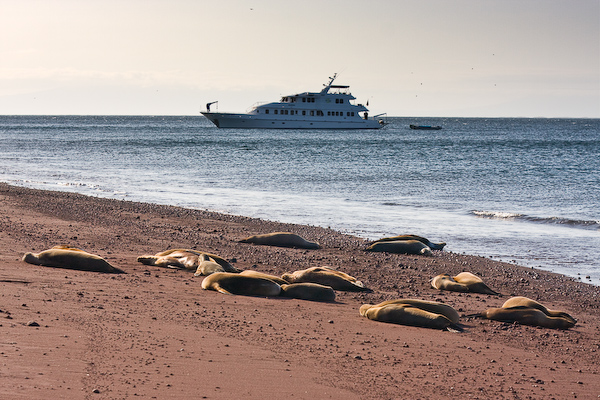 A last look on the Isla Rãbida red sands

Back on the beach we all dried off a bit and were then picked up and taken back to the Adventurer. Setting off again we headed north towards Isla Santiago. On the way Wilo had a surprise for us. Around sunset we all gathered on the top deck as the boat pulled up beside an island/caldera called Rocas Bainbridge. The sinking sun picked out the little pink dots of flamingos living inside the caldera, protected from the ocean and predators by the rocky walls. We sat as the boat continued on and a wonderful sunset lit up the sky. Frigate birds were following the boat and glided around in the yellow sky, various islands picked out in warm tones as the sun fell from the sky. It was beautiful and peaceful, even the sea calming down to give us a smoother ride. 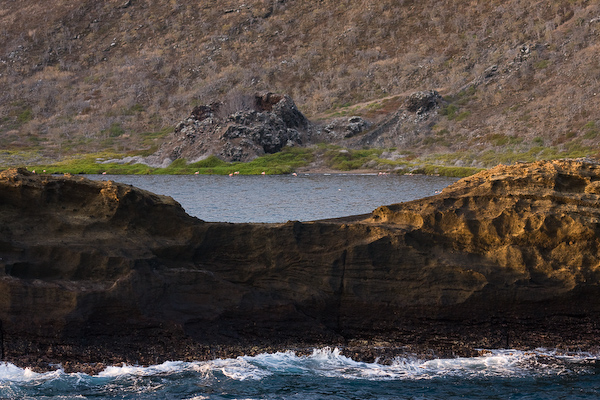 Flamingos in the caldera of Rocas Bainbridge 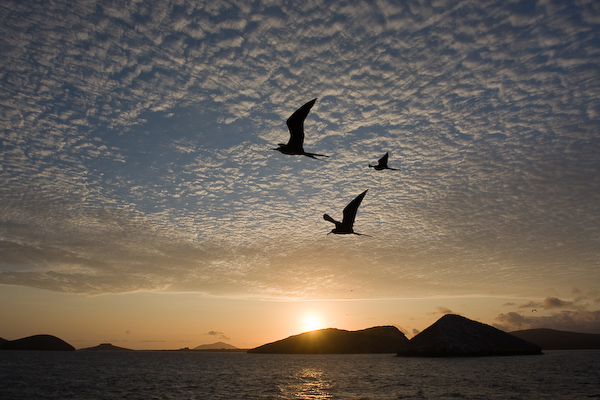 Frigates fly across the sunset sky 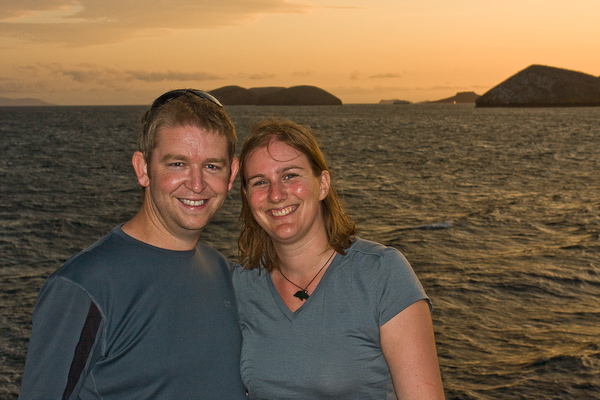 Two Kiwis in the Galãpagos

We moored off the shore of Isla Bartolomé, a small island nearby to the larger Isla Santiago. Because of the delicate nature of the sea floor here we actually moored to a buoy rather than sinking anchor. We had dinner and the following meeting to go over the next day. Keryn and I retired early, the bad rest of the previous night and a long day meaning we were now very tired. Thankfully we had a much better nights sleep this time around.