Again breakfast was at 7am and we headed out in the dinghies around 8am. The first island visit would take us to the volcanic lava flows of Isla Santiago but before this we skirted around Isla Bartolomé looking for signs of the Galãpagos penguin. We were lucky and saw a few individuals, one still moulting and looking cold and lonely standing on some rocks. Heading around the pinnacle, a large spire of weathered rock, there were sea lions relaxing on rocks jutting from the water. We also saw a regal looking heron standing and staring at us, a little blue lava heron staring intently into the water waiting for breakfast to appear and further along pelicans and marine iguanas as we approached Bartolomé. 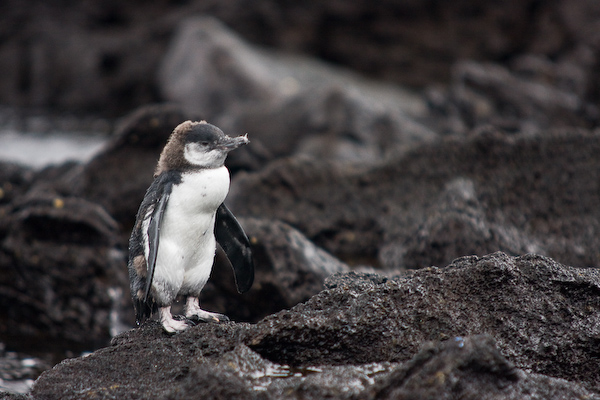 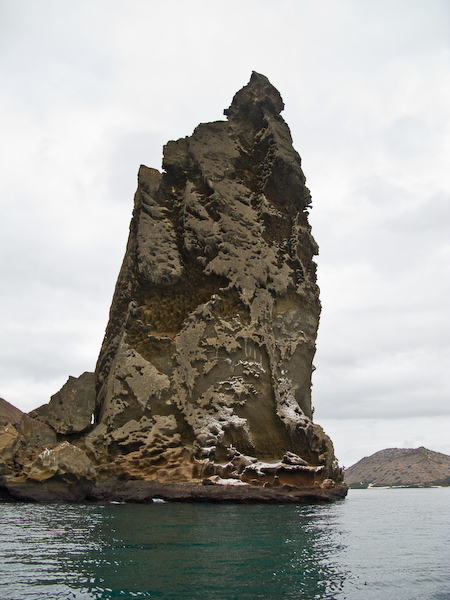 The pinnacle of Isla Bartolomé 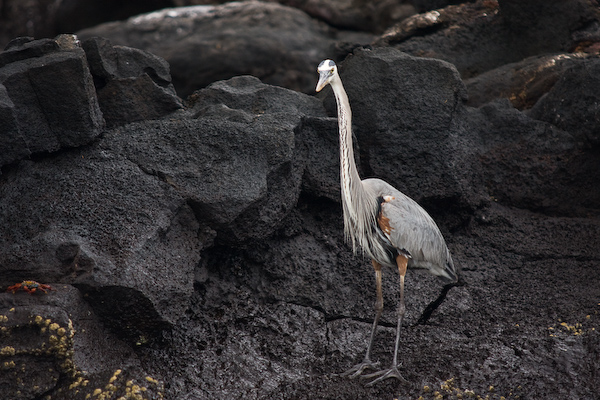 A heron checks us out 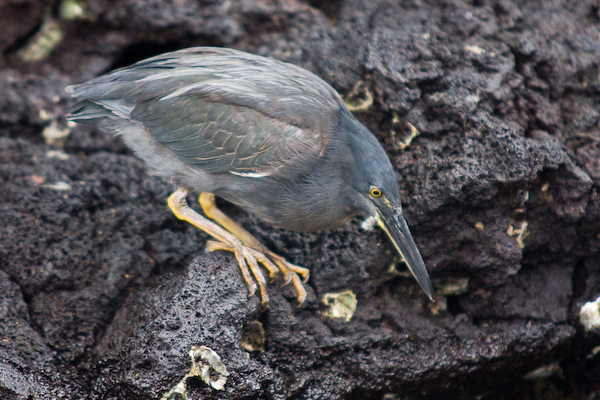 The wet landing took place on a narrow strip of golden sands in amongst the black lava flows, 120 years old. We walked across the old lava flows taking in the many different shapes and patterns in the rock. The lava here was slow moving and quick to cool so the rock had in many places the form of coiled rope, viscous liquid piled up and sometimes looking like radiating lines from some earthquake epicentre. There were few animals, lava lizards scuttling away if we got too close and a few locusts disappearing in a buzz of wings. There was also little in the way of vegetation, just a small plant that looked like a tiny yellow weed pushing up from cracks in the lava and a few aptly named pioneer cactus that had found a place to cling in amongst the rocks. 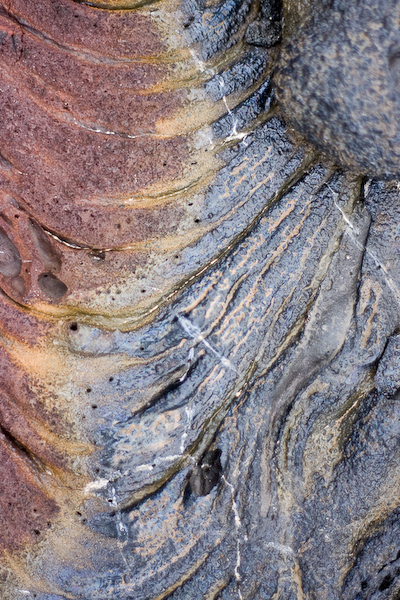 Colour in the lava 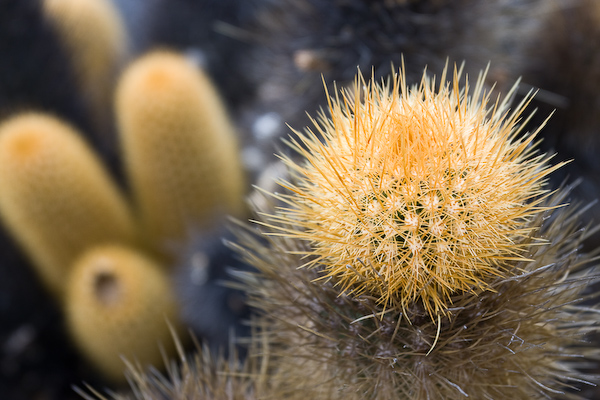 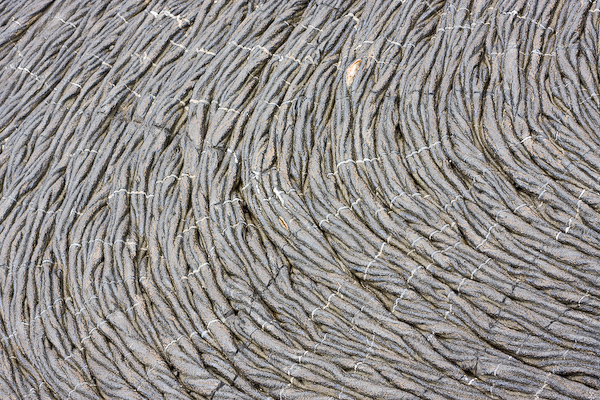 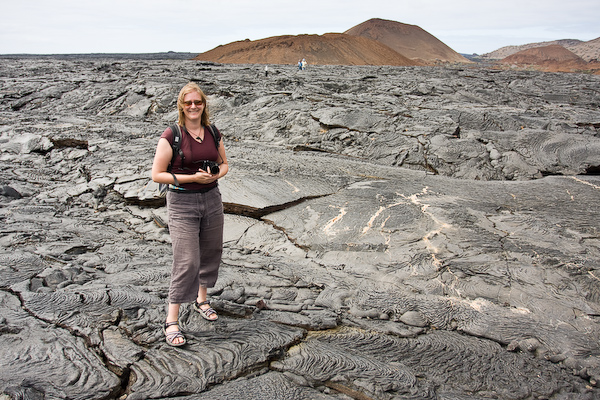 Keryn on the lava

Walking back to the beach we had time for some snorkelling. There were a bunch of older tourists from the National Geographic boat and many of them were protesting loudly at the coolness of the water. I guess our wetsuits kept us warm, I thought it was OK. The fish here were largely the same species we had seen the previous day. Keryn took some shorts of a marine iguana sunning itself on the shore and we spotted a dark blue puffer fish covered in bright white spots. The puffer was very shy, it took a while to manage a decent photo. 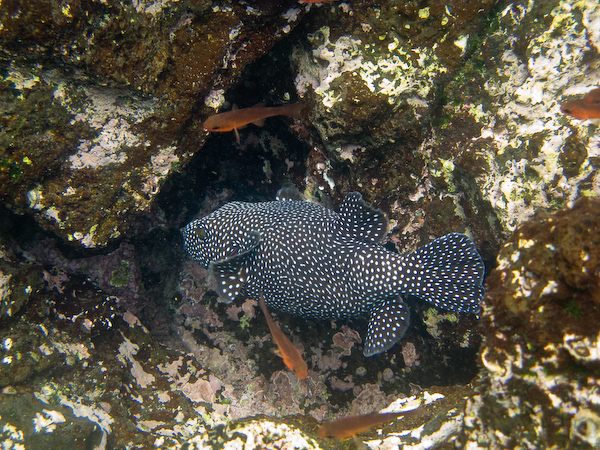 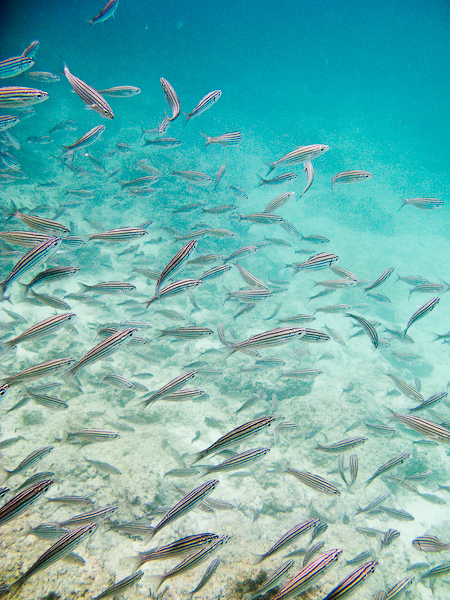 Schools in the clear water 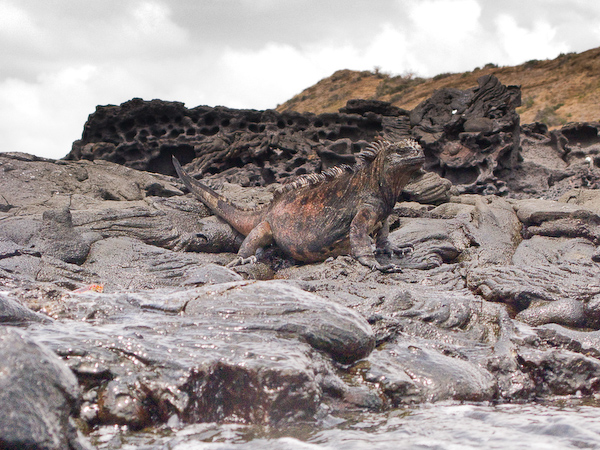 The marine iguana shot from the water

Once done in the water we were picked up and taken back to the boat. In the afternoon we had a wet landing on Isla Bartolomé and walked for five minutes to the far beach, one we were not allowed to snorkel at. Here there were signs of turtles having come up to lay their eggs on the beach, a number of filled in pits giving the locations away. One pit, quite far up the beach, was very recent, maybe a few days old at most. The tracks of the turtle were visible as a groove heading from the pit to the water. 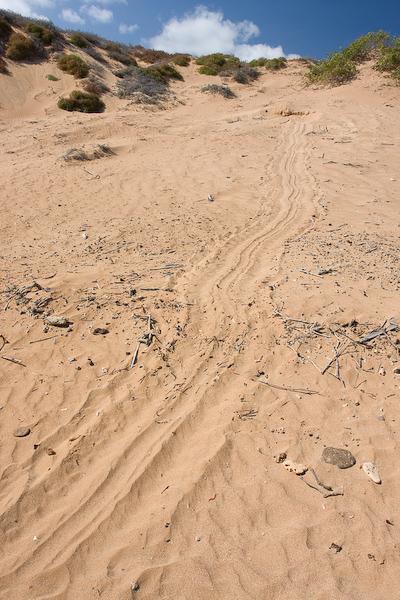 Turtle tracks in the sand

In the water Wilo pointed out dark shapes patrolling along the shore. We saw three or four sharks swimming back and forth underneath the small breaking waves. There were also a few turtles clearly visible also moving in and out from the shore, maybe waiting for us to move away. It was captivating being that close to these animals. 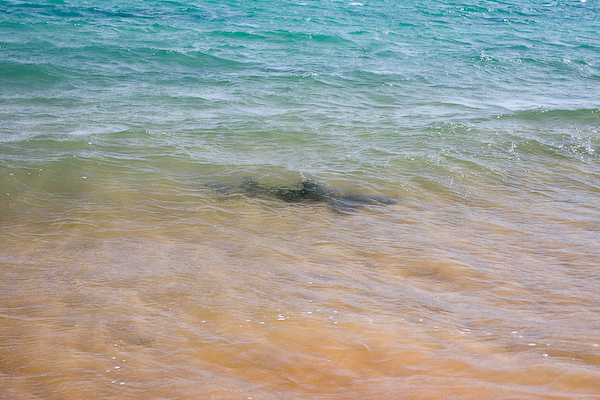 A shadowy shark patrols the beach

Back to the first beach we here were allowed to snorkel. I got in the water before Keryn and was moving around the rocks close to shore when I looked ahead and saw a shape I didn’t recognise on the surface. It was a penguin coming in after a morning swim and it paddled along around me and headed into the rocks on the shore. I followed it while I could and watched it clumsily climb onto the rocks and then head out of sight. Naturally I didn’t have the camera at the time, oh well. There was another penguin sunning itself a little further out and we did manage to get photos with this little guy. The penguin didn’t care how close we got so there were a few photos taken. 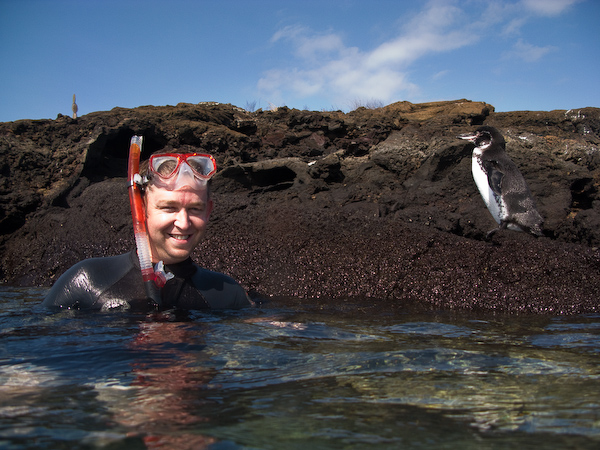 Brendon and the penguin

With Keryn I swam across the bay and we snorkelled in the rocks around the base of the pinnacle. The rock formations were interesting but the current meant we couldn’t really stay very still, trying to take photos often meant judging when to stop before being dragged into a rough surface. There was an interesting puffer fish in this area but it was too hard to take a photo and stay off the rocks. Heading through the shadow of the pinnacle the water became darker and the visibility fell giving rocks more ominous shapes and the water seemed spookier, more unknown. Eric saw a shark in this area, I don’t know that I would have been happy with a similar sighting. Further around the pinnacle and back in the light we passed over large rocks, some the remains of a second pinnacle that fell down decades ago. The sea lions we had seen in the morning were still sunning themselves and a few decided to join us in the water; Keryn was a bit unsure of taking photos, especially when the large bull entered the water, but the sea lions ignored us. The swim lasted quite a long time and my thighs were protesting by the time we got back to the beach. Keryn took a last few photos of some bulls-eye puffer fish in the shallows before getting out and drying off. 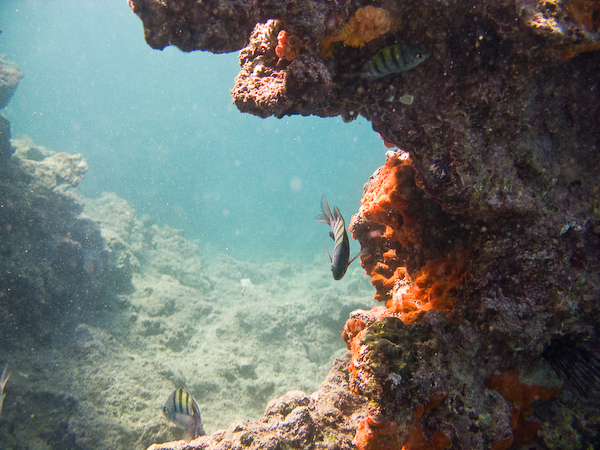 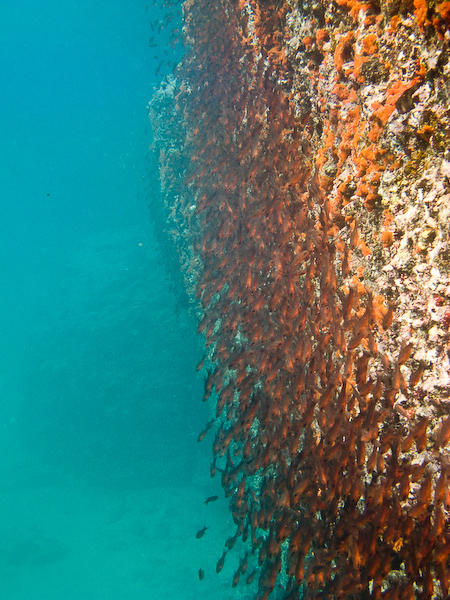 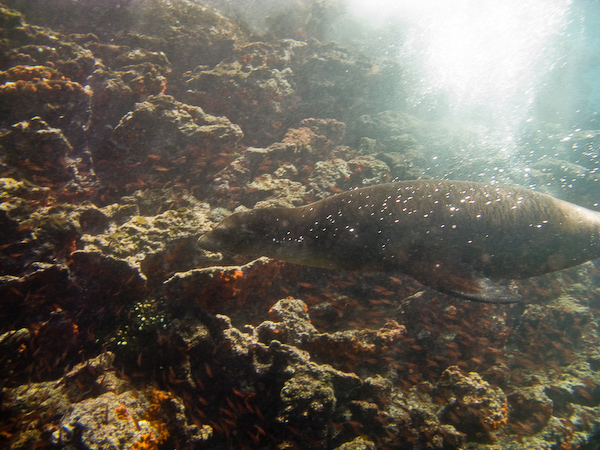 A sea lion swims past

We were taken back to the boat for a light snack and then a siesta before the final trip of the day. We headed back to Isla Bartolomé around 4:30pm, our goal to climb the 372 steps up to the peak of the hill where we would get panoramic views over the Galãpagos. We arrived for a dry landing and stopped once all on shore to look at a group of marine iguanas piled up one on top of each other. Following the path we headed up taking frequent rest stops as the sun got lower. At one of the stops, maybe halfway up the climb, we could see little puffs of water out in the ocean; whales in the distance. There were two different spoutings visible but they were so far away we couldn’t see what type of whale they were, Wilo thought they were probably humpback whales. 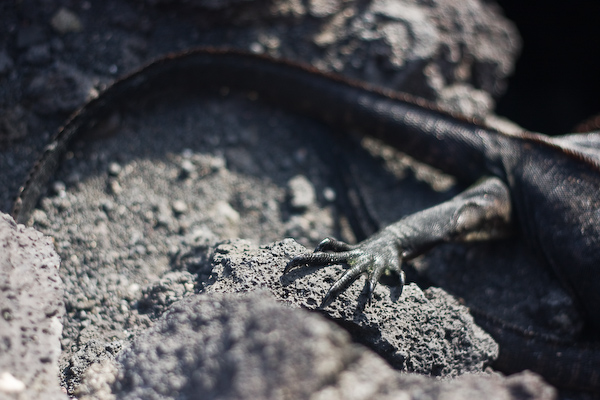 Claws of the marine iguana 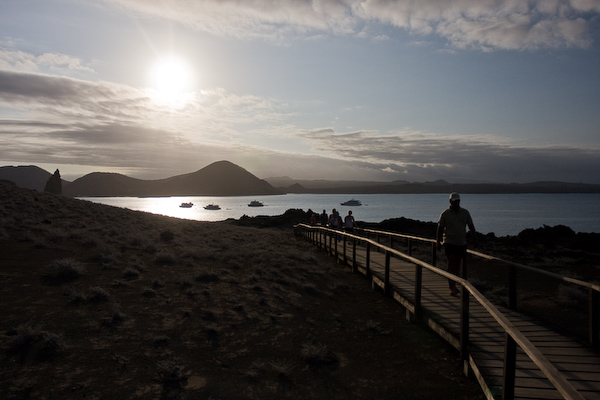 Walking to the summit

At the summit Wilo pointed out the various different islands that could be seen and we all took lots of photos. We had a few group shots as well, it taking a wee while to for Wilo to get through all the different cameras. From up here we could see a water filled crater in the bay below and the current left trails behind the moored boats. As it started to get dark we headed back down and waited for the boat at the landing. We were joined by a pelican on the step below us, a few herons, an oyster catcher, the odd crab and too many mosquitoes. 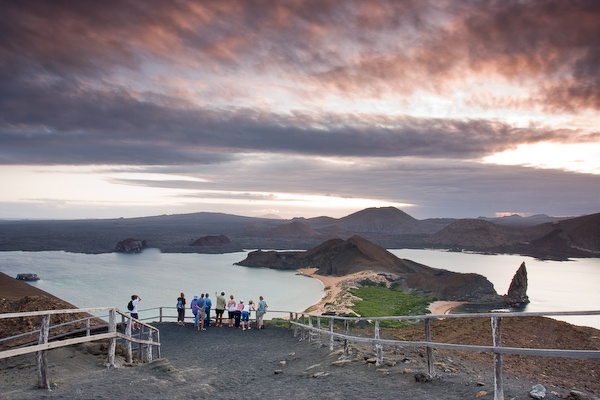 Pointing out the islands 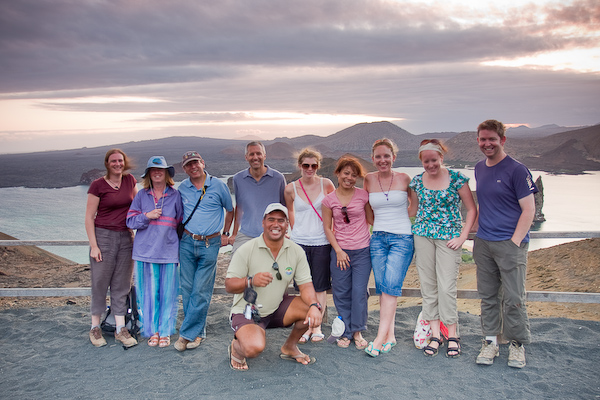 Back on board we had another fine dinner and the talk about the next day. We talked a bit before heading to bed, slowly getting to know our fellow passengers.