A group of five of us was up at 5:30am to go for the sunrise walk but it turned out I had miscalculated and the sun rose thirty minutes earlier than I thought it would. We were walking up the path into the national park and from a viewpoint could see the sky turning to fire behind us over El Chaltãn. Still, there was a chance the many mountains in the area would block the sun from the Fitz Roy peak until later so we continued on.

It soon became clear that the nice red glow was starting well before we were in position to photograph it. I increased the pace leaving Keryn, Janet, Margie and Chris behind in my quest to get the photograph. Above I could see a mound of rock turning red, the line of light descending ever so slowly down the stone. The path went around this mound and coming around I spotted a bird high above watching my progress from a stone outcrop. It looked very much like a condor, black with a white collar at its neck and my guess was later confirmed by Chris. I didn’t have time to stop for a photo, a few kilometres to go yet. A few hundred meters further on I could see the top of the Fitz Roy mountain poking over the top of the ridge ahead and it was a lovely dusky red contrasting nicely with the clear blue sky. Damn damn damn.

It took another forty five minutes to get to the viewpoint I wanted. Jimmy had walked in the park the previous day and had shown us on a map the place where he had got his best view of the mountains and this is where I found myself shortly after 6:30am. I think I was probably half an hour too late but I was there so took lots of photos anyway. The viewpoint was on the top of a ridge and below I could just make out what looked like a small lake so I headed away from the main trail and followed half paths down to the waters edge. The view here was better than above what with the reflections and had the added bonus of being out of the cutting wind blowing through up higher. 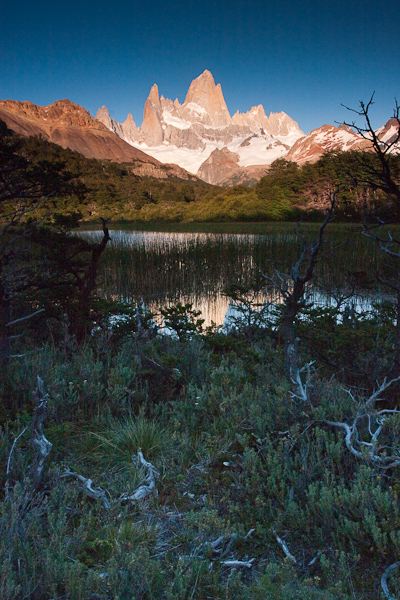 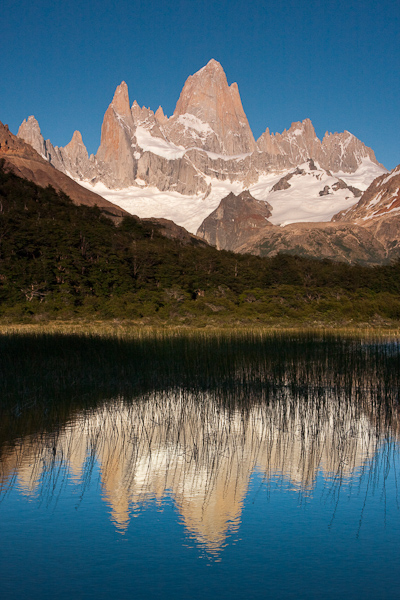 I was just coming back up to the main trail when Chris arrived and he was soon followed along by Keryn and Janet. Margie had turned back earlier, the steepness of the trail proving to be more than she could manage comfortably. Everyone took some photos, Chris some video and we had a group photo as the sun rose higher before we continued. 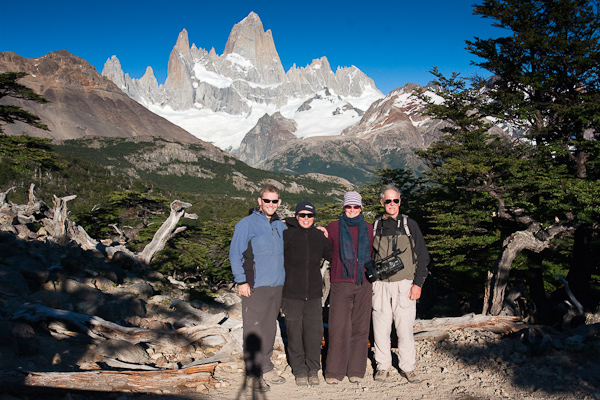 Together in the park

In the afternoon we were moving on to the city of El Calafate so we only had a certain amount of time, not long enough to complete any trails. We walked for another hour before turning back, taking photos from beside a river that tumbled attractively through a shallow valley. We could see in the distance water falling from a glacier but didn’t have enough time to go for a closer look. 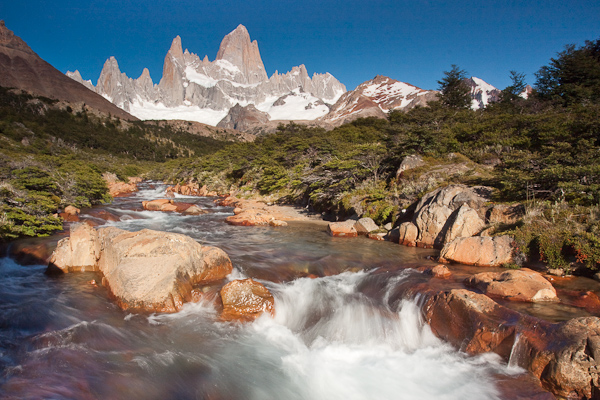 We arrived back in El Chaltãn in time to do some last minute shopping and to grab a bite to eat before the truck departed shortly after 1pm. The drive to El Calafate took a few hours and we then moved all of our gear into a hostel, Keryn and I sharing a room with Janet and Kony. Rather than go out for dinner we decided, with Janet, to cook our own meals so went into the town centre to grab some supplies. In the end pasta and bolognaise sauce with vegetables and chicken saw us through two dinners.

Keryn and I were up quite late getting some laundry done, there wasn’t much else exciting enough to write about this evening.