The final checkpoint before Machu Picchu opened at 5:30am and we were in a long line waiting for our turn to head through for about twenty minutes. Melissa led us all through some stretches, much to the amusement of others in the line. This was the first time on the trail that we had everyone in one place at once and as the trail wasn’t very wide everyone walked in a long single file line pretty much for an hour until we all reached the Sun Gate. There were two short steep sections, almost like rock ladders, and people started dropping back as they got tired and sweaty around these points. I put on a burst of speed when I realised I was nearly at the gate and arrived to find only a dozen or so people taking in the view.

The Sun Gate is about forty minutes walking up from Machu Picchu and on forgiving mornings the view is amazing. Thankfully we had a good morning and got to see Machu Picchu revealed slowly as the sun rose and the mist swirled and cleared from around the stone walls. It was a magical site, this strange ruined city perched in between rising mountains and covered in a moving ripple of clouds. 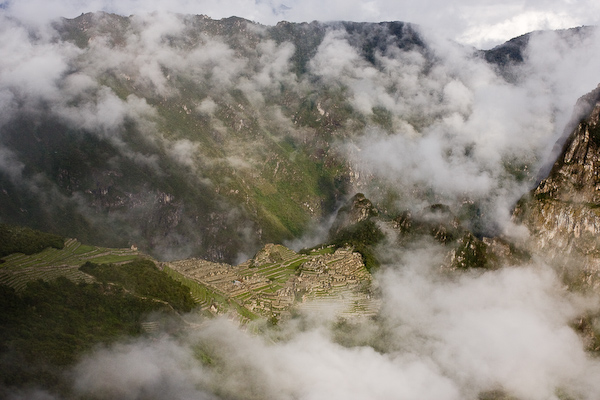 Machu Picchu from the Sun Gate

The Sun Gate area quickly filled with people and it wasn’t long before we were walking the last few kilometres down to Machu Picchu. There were a few more short stops and at one Danny changed into his now famous pink hot pants with the intention of walking into the site but he was convinced by Saul that perhaps this wasn’t the correct clothing for a site of such significance. Still, some of the passing walkers got a giggle.

We came into the ruins, passing grazing llamas and those tourists that had arrived earlier to the site on the bus. We had some time to wander around before all the group arrived and Danny and I climbed to a hut perched on a hill and looked down to the city below. The mist was constantly moving, the best views were probably as we arrived with the site and backdrop of Huayna Picchu both visible. 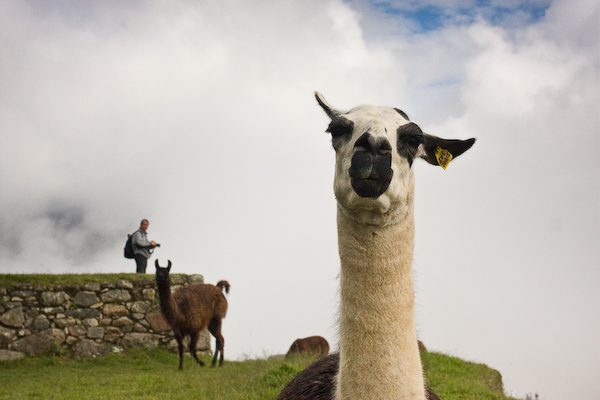 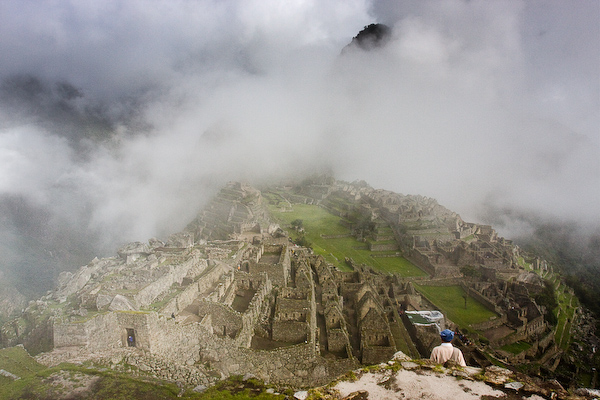 Machu Picchu emerges from the mist

We got a snack and our tickets for the site and then started our tour. Fairly quickly we were spotted by the other half of our group; Keryn and company coming over to join us for a while but as they had already been wandering around the city for some time they did their own thing. Saul showed us a few different temples and gave us lots of history and then we had time to wander around ourselves. Some climbed up the crazy path to the top of Huayna Picchu and the rest of us took a relaxed wander where ever we wished to go. 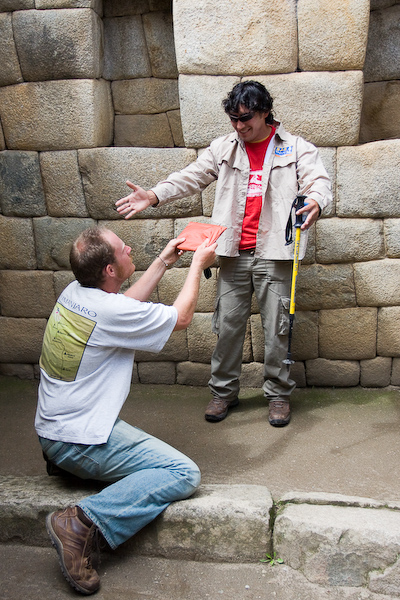 Re-enactment at one of the city buildings 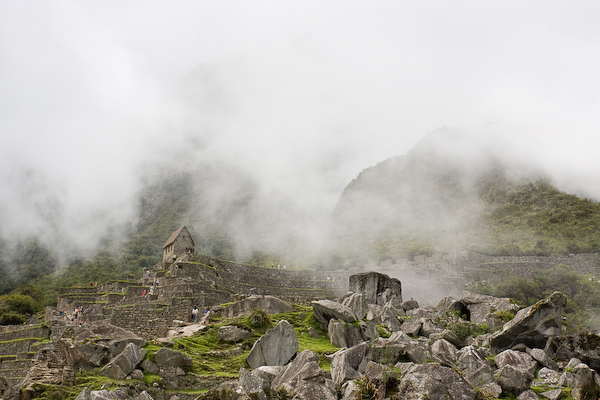 Looking up from the city 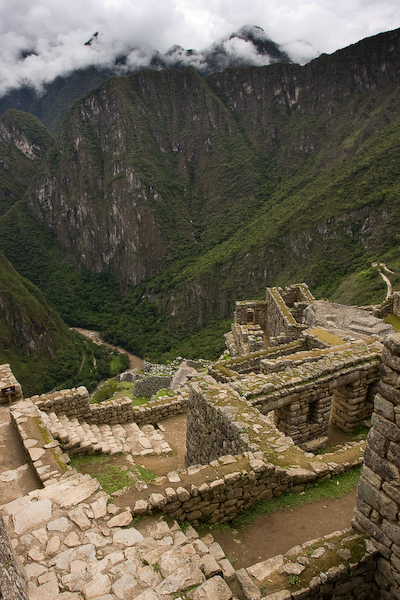 Looking down from the city

Most people ended up taking the bus down to the town of Aguas Calientes where we would be having lunch. Danny, Elli and I decided to take the steps instead (and were later followed by Gavin), it seemed a little like cheating to come this far and then not walk the final half hour. The steps were steep but we made good time, stopping to take photos at the bottom and then walking along the road to the town. We bumped into Anna walking away from the town so turned her around, she had got mixed up with the directions to the hotel where we would be eating.

We had a drink and some lunch and then spent an hour or so at the towns hot pools soaking our tired muscles. Back at the hotel we were soon enough taking our bags and heading for our scheduled departure at the train station. We trained to Ollantaytambo as the darkness deepened and arrived to rain and confusion. We ended up following a young kid through the crowds at the train station and out through the packed taxi drivers and then into a full car park where we found our bus. There was more confusion when we locked ourselves in the bus and some people were left standing in the rain. Then Anna got turned around and Vanessa and Rhys had to go looking for her. Mark wasn’t feeling well and the rain and delays meant people were a bit tetchy. The bus ride seemed to last forever and when we arrived in Cusco I wasn’t in any mood for a night of drinking. Theoretically I was taking part in the 24hr challenge, staying up till 5am the next morning as a final celebration of completing the trail, but I bailed out and went to bed instead. I did surface long enough to get a Movember photo with the other guys, we had all been growing facial hair for a good cause. Then I went and slept like the dead. 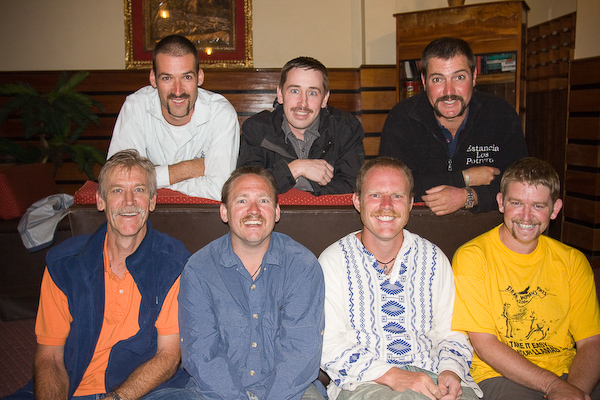