Now that we’d seen the Viedma Glacier in the distance it seemed churlish to now take the opportunity for a closer visit. We were picked up in a van and transported out to a boat ramp on Lago Viedma. It was a beautiful morning, a little chilly but we had good visibility and blue skies dotted with little fluffy clouds. Our transport onto the lake was a nice looking catamaran and once the other passengers had arrived and the crew had boarded we followed and found seats.

Setting off we were first sized up for crampons and then given leave to wander where we would. I went up to the top deck and found a position where I could see the surrounding mountains and also hopefully the glacier when we passed the approaching headland. It was warm in the sun but if I moved out of the shelter of the forward cabin the wind was very cold so I stayed in the lee of the cabin as much as possible.

It took twenty minutes to get to a point where we could see the glacier and we slowly approached the ice face. In the water were ice bergs that had calved from the glacier glinting white in the sun and glowing blue where shaded. The wall of ice came closer and the boat turned around so the deck faced the glacier. We all photographed this jagged view, hundreds of photographs presenting themselves through the viewfinder. The stratum of the ice was clear to see, force of weight and the constant movement forming large cracks and faults in the ice. The colours were myriad from pure white to azure blues and dirty black where powdered rock lay across the surface. 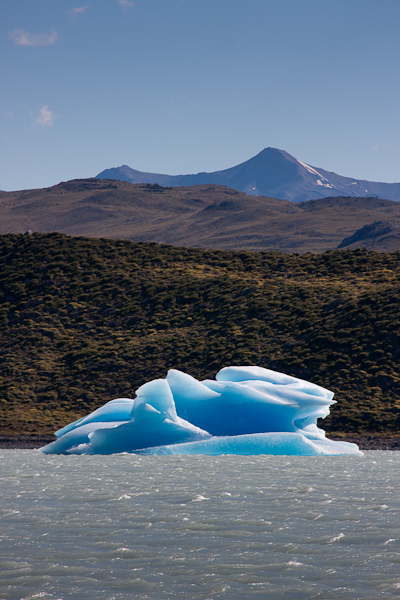 One of the icebergs 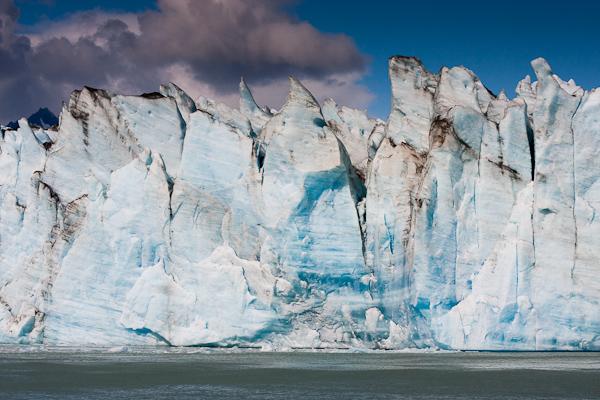 Getting close up on the face of the glacier 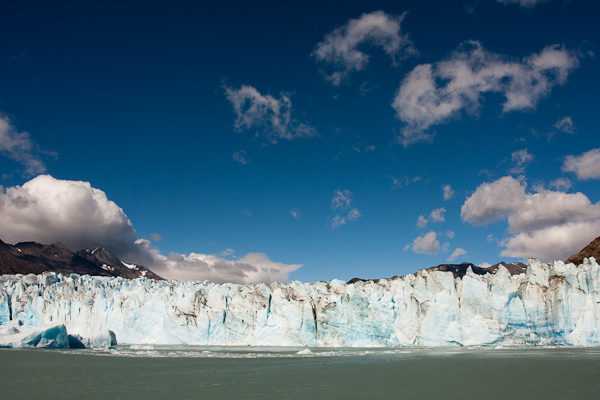 The boat was then taken to the left hand side of the glacier and we docked into a cleft in the rock rising out of the lake. The boat passengers were split into two groups, one for Spanish speakers and one for English. We gathered on the smooth caramel streaked with chocolate rocks and our guides introduced themselves. The main guide was an American man named Richard and there were two others with him, Lolo and a guy whose name has disappeared from my mind – probably because he didn’t speak much. 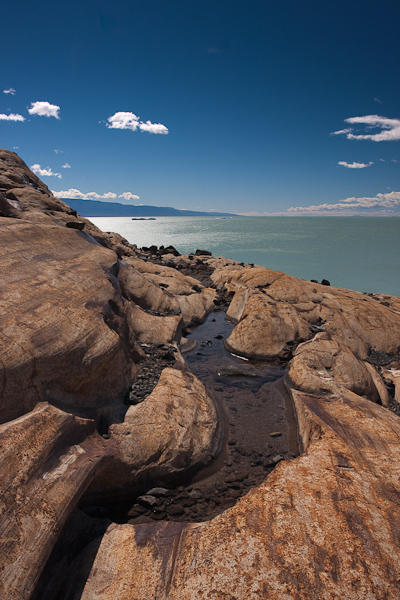 Richard gave us some information on the glacier and the region. The lake was carved out thousands of years ago when the glacier was much larger. The glacier is currently in retreat, as are most in this area. The ice bergs actually break off from the glacier under the waterline; anything that falls off from above is too small to form an iceberg. The smooth rocks we were standing on have been polished by the years of moving ice and rock. 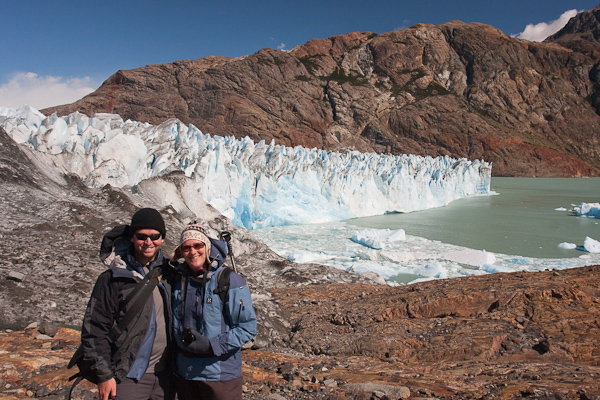 Keryn and I at the viewpoint 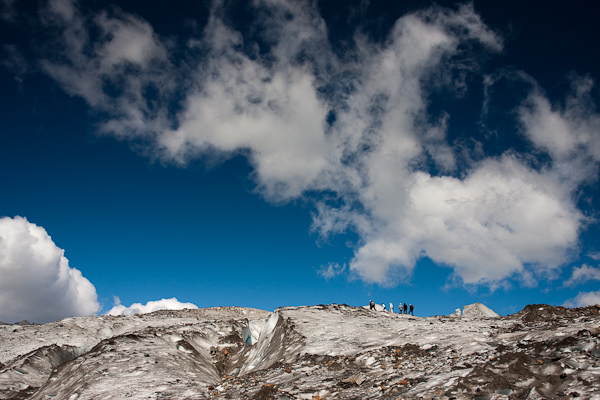 Another group walking on the glacier

We walked on the rock and came to a viewpoint where we could see the face of the glacier and the pushing ice coming down from the higher plateau between the snow dusted mountains. The obligatory photos were taken and then we headed closer to the glacier and sat down to put on our crampons in readiness for a walk on the ice. After a brief lesson in how to walk with the crampons so we didn’t injure ourselves or put holes in our clothes we were carefully walking over the rocks, steel scrapping on stone, and then stepping up to the ice. 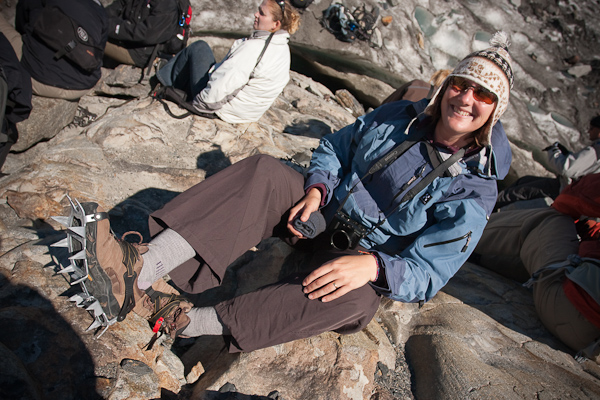 Keryn gets to grips with her crampons

For the next three hours we walked over the glacier looking into deep melt holes in the ice, viewing the sculptured fins of ice sheets sticking into the sky and watching melt water wind its way towards the lake. Another group off the boat was ice climbing and we watched them for a short time taking their first lessons in how to use crampons and ice axes to head up near vertical white faces of ice. One of our guides decided to take the short route at one point and headed up an ice wall like spiderman, bits of crystal flying with each bite of his axes. 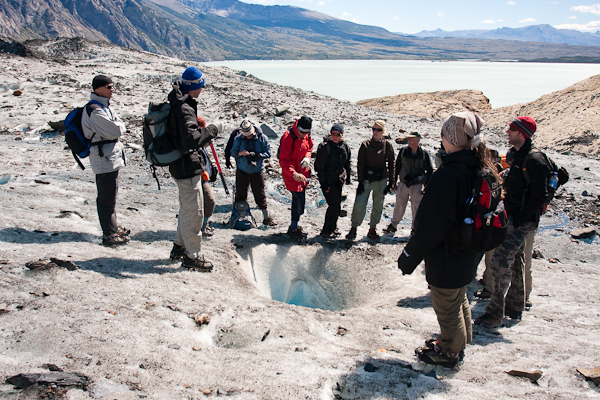 Looking at a sink hole 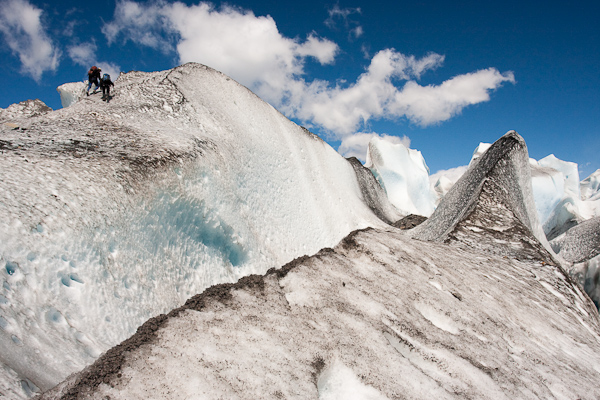 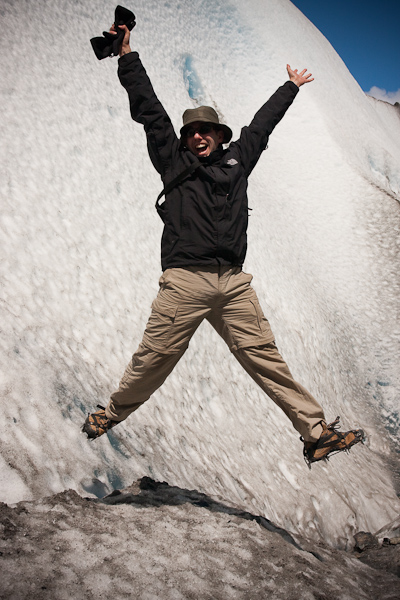 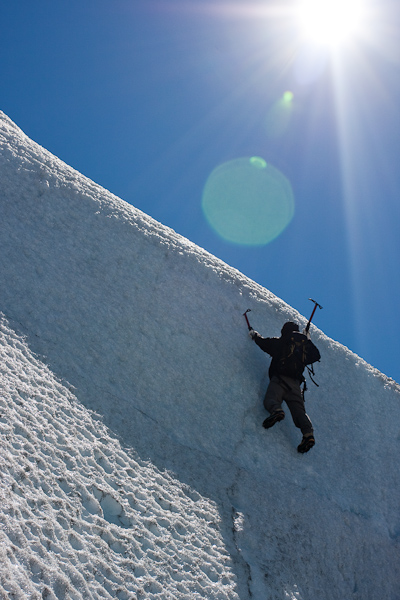 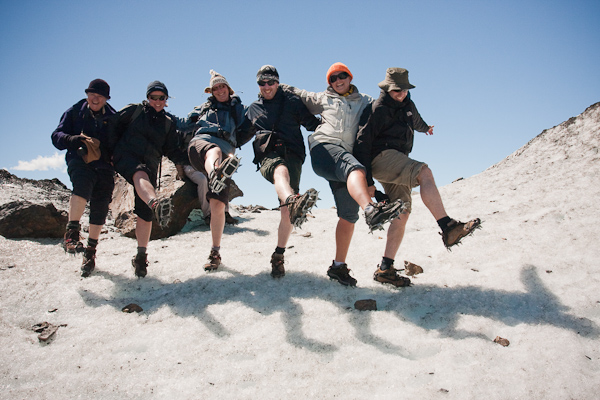 The landscape was unreal, the forces moving the glacier forward pushing huge chunks of ice towards the sky where they are shaped by the sun and wind into jagged peaks and plunging valleys. All sense of distance was lost in the blue, white and dirt grey landscape. 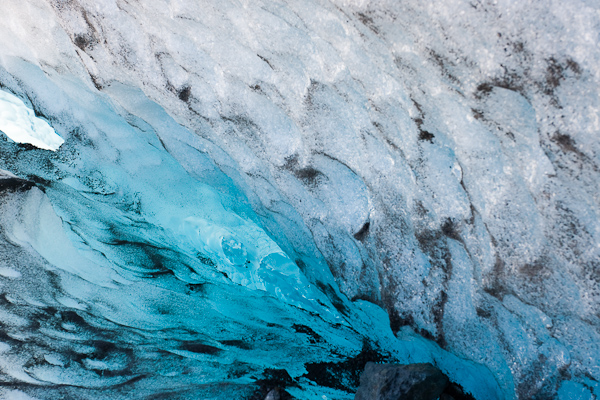 Looking into a hole in the ice 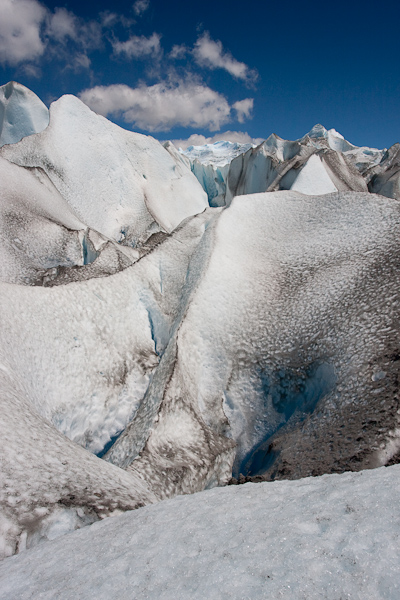 We had a group photo shortly after a nice moment where we all had a glass of bailey’s with ice taken direct off of the glacier, hundreds of years in the making. After this we headed back slowly to the point where we had climbed onto the glacier, there to take off our strange clip on spikes and start back to the boat. It didn’t seem like we were out there for four hours, time becoming fluid as we explored. 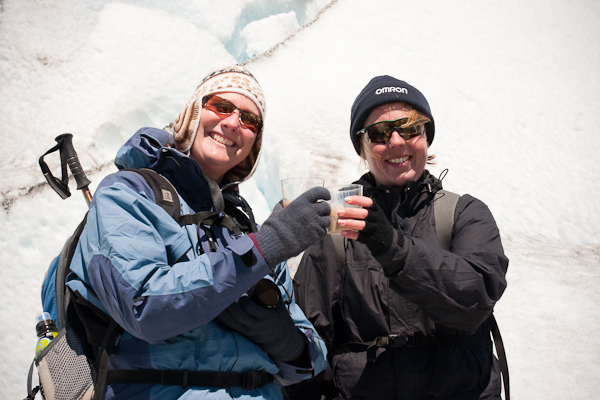 Keryn and Janet toast their baileys 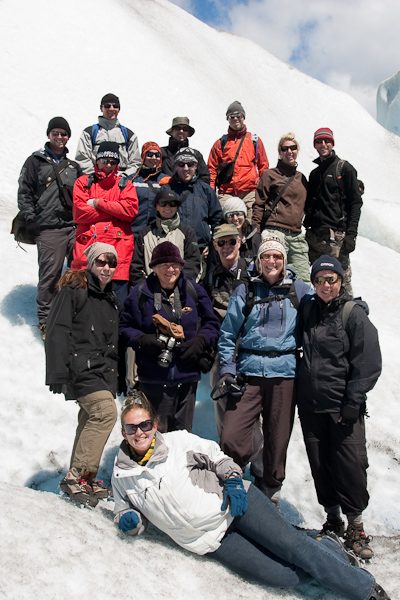 We rode the boat back to the little dock and there had to wait for our van while the other passengers took their seats on the waiting bus. Thankfully our driver wasn’t far away. In town some of us were still looking to get out so at my suggestion we walked out to a short walk in the hills outside the town up to a viewpoint called Mirador de los Cóndores. This walk took about twenty minutes and at the lookout we could see over El Chaltãn to the Fitz Roy range. 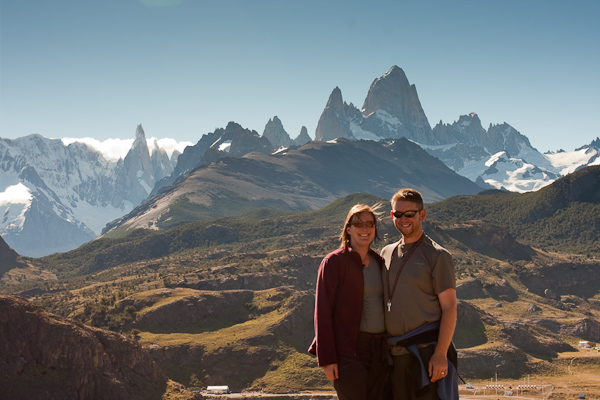 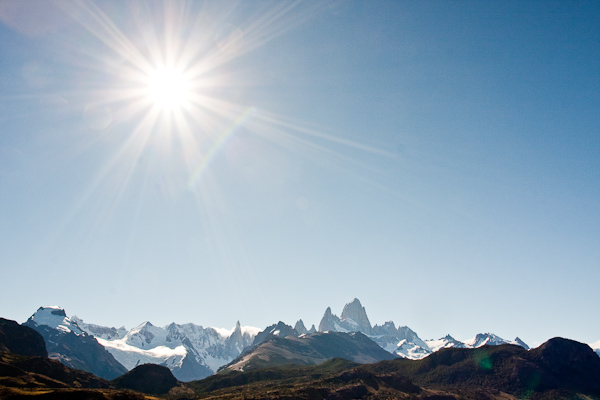 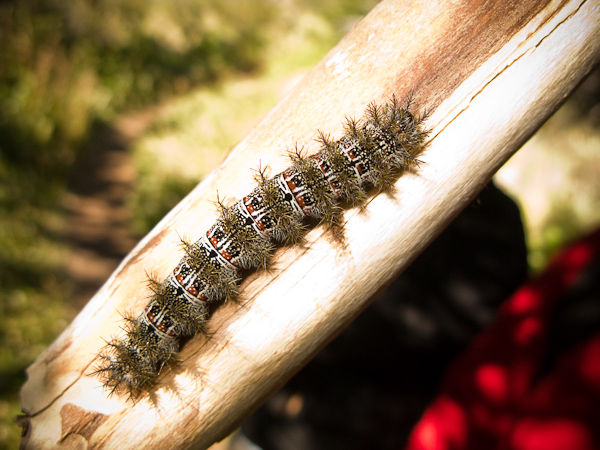 We had a group meal at another restaurant in the evening, thankfully there was no repeat of the previous days high winds. I had a plan to get up super early to hike into the park to catch the rising sun reflected off the peak of Fitz Roy so we were soon to bed. Billy and Minette had a different room so this time we had a nice, uninterrupted sleep.