Ten of us had selected a boat tour of the lake this morning. From the hotel we walked down to the lakeside docks, all simple wooden structures a few planks wide, and boarded our basic vessel. The first ride saw us head west across the lake to the Hotel La Casa Del Mundo for breakfast. When we came in to the dock I first thought we were at the wrong place. Seeming to cling to the rising cliff La Casa Del Mundo looked like a villa out of a Bond movie, a lovely wooden building of arched windows and vine covered verandas overlooking the lake. We walked up the path from the dock through wonderful gardens still glinting with the rain from the previous evening, everything a rich green, yellow or red. Breakfast itself was wonderful and tasty, the food all warm and with that homemade feel. After eating we wandered the paths and relaxed while letting breakfast digest. Matt swam briefly in the cool and deep lake water, the rest of us deciding that it looked a bit too cold really. 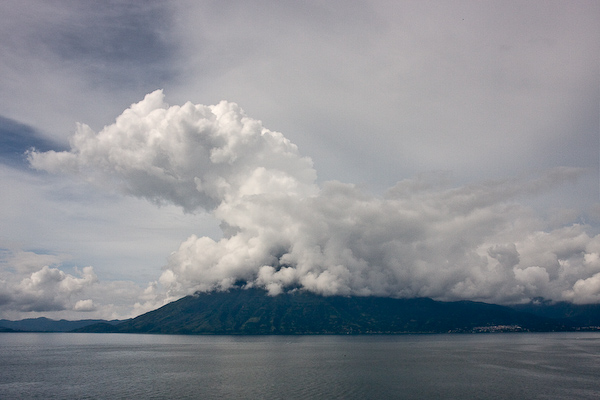 It couldn’t last, we were here for culture, not relaxation. Back to the boat we headed south towards Volcán San Pedro, veering a little east to arrive at the largely traditional village of Santiago Atitlán. Here we would get a little culture and visit the local deity Rilej Mam (so says our Rough Guide, Josh called him Moshe Mun). 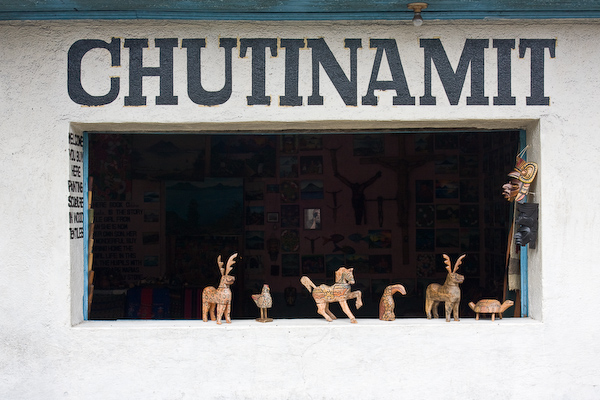 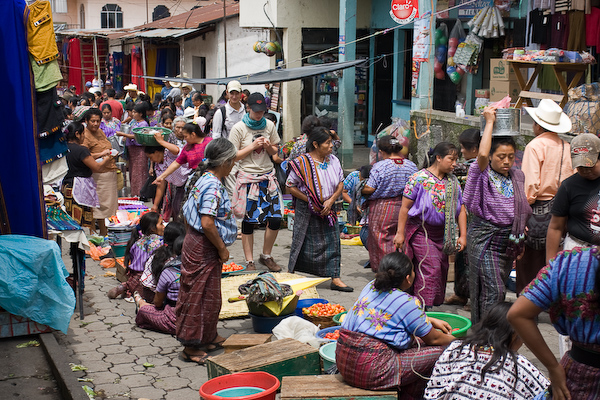 Walking up the cobbled street we passed more craft stores set up for us tourists. We continued up into a market but one quite different to that at Chichicastenango. Here was a market for the locals, we were largely ignored as people bought their clothes and food stuffs. The Tz’utujil speaking Mayan population was out in force, shorter in stature and wearing traditional clothes coloured purple, white and red. It seemed to be avocado day, I’ve never seen so many of the fruit in one place. There were large bags by the hundred, a dozen or so trucks full to the brim and men in groups sorting huge piles on the ground. We were being led by a couple of local kids to the house of Moshe Mun so passed through the market on to the town square and the large church. 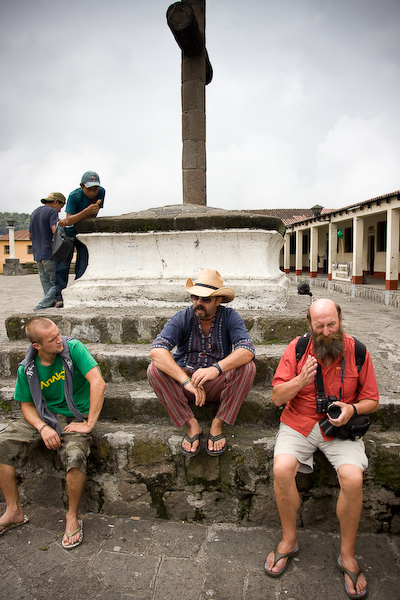 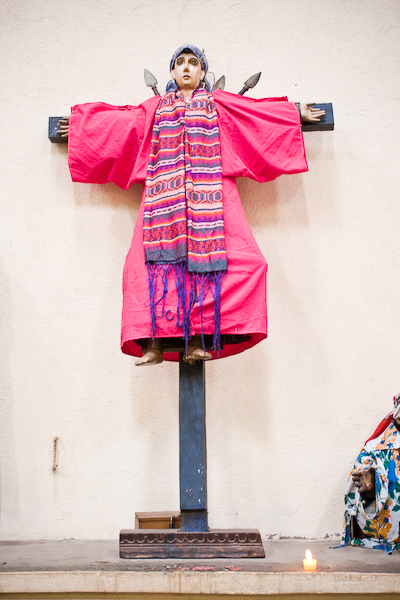 Josh gave us some history on the town and the killings that ultimately led to the militant rulers being forced from the area back in the early 1990’s. Inside the church the strange mix of Catholicism and Mayan religions was again evident, the statues of saints along the walls being heavily decorated and joined by less recognisable personages. Back outside we joined our young guides heading further into the village.

Moshe Mun is the patron of cigarettes and alcohol, deified after his death and venerated by the Mayan of the area. He is housed each year in a different house and to have him in your house is a great privilege. People bring offerings of cigarettes and rum while are in turn smoked and drank by Moshe Mun and with all this smoke and alcohol his clothes start to smell, so every week his clothes are changes in a ritual. The clothes are donated and if your donation is used you get to keep the old set, again a privilege. 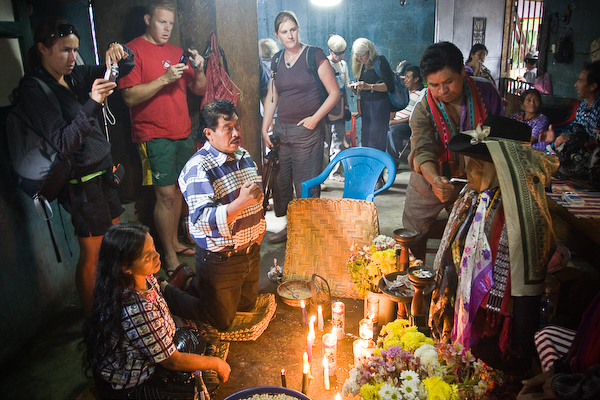 We arrived and Josh purchased offerings for our group. We paid our fee (2 Quetzals each to see him, 10 to take photos) and were then in his presence. Moshe Mun is a wooden statue with scarves and other clothes around his body. He wears a black sombrero and is constantly smoking with a drink in between each cigarette. We arrived while a local man and his wife were appealing for his help, kneeling before him. Our money was placed in a tray before the figure and there were candles and flowers arranged before him. The ceiling was decorated with streamers and hanging fruit and there were local men on the table behind the statue, there as his minders. It was all a little bizarre but those present took it all very seriously. 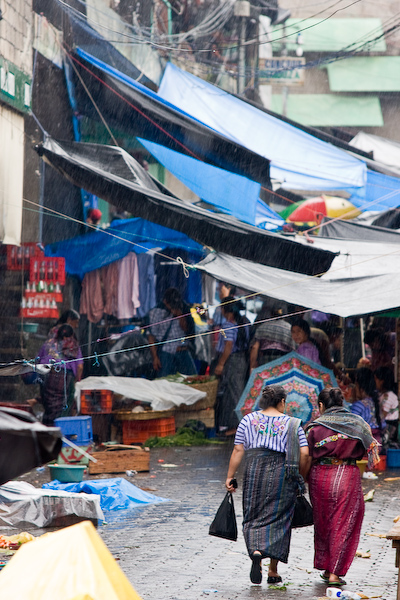 We all got together on the road outside and then it started to rain. We walked back towards the square and market as the rain got heavy, those of us with raincoats putting them on. By the time we were back at the market it was a morning downpour, everyone at the markets hiding underneath tarpaulins or buildings. Walking between the press of people we were getting wetter from the water streaming from the tarps than the rain, Tash in particular moving face first into a bucket sized volume that chose that moment to fall. The wet journey continued until we took refuge in a cafe where we dried off over a few soft drinks.

The wet weather took away any enthusiasm left to further investigate Santiago Atitlán so it was back to the boat, by which time the rain had mostly stopped. Loading up we then headed back out onto the lake and east to San Antonio PalopÃ³.

This town was even less touristy than the last and other than a group of girls selling us small things, bracelets and the like, we were almost alone. Keryn and I walked up a steep path in between houses and the odd shop towards a white church visible on the hill above. Arriving we found it smaller than that at Santiago AtitlÃ¡n but still interesting with an intricately carved wooden fresco behind the altar. Leaving the church we were joined by a local woman who proceeded to try and sell Keryn some clothing and other weavings. Josh came along and translated for the woman. In a friendly but insistent way Keryn led by the hand to her nearby shop and for the second time on this trip she became a model for the local clothing. Josh was also dressed up, the difference being he liked what was offered and bought almost a full outfit. Keryn eventually bought a small tapestry with stitching representing the local pottery and mountains. More tourists arrived, bringing with them more local ladies, so we left and walked back down to the boat. The weather on this side of the lake was much nicer, it was comfortably warm and sunny as we made our way down the hill. 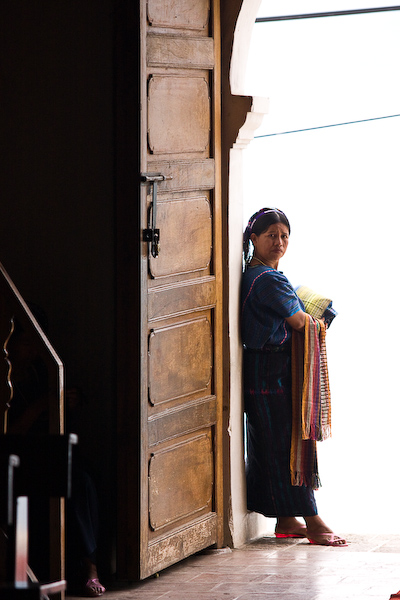 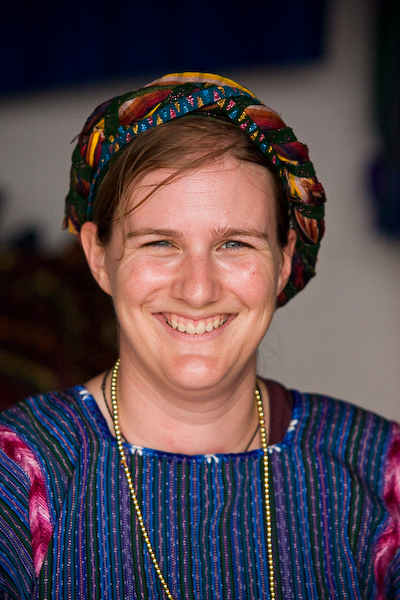 Keryn all dressed up 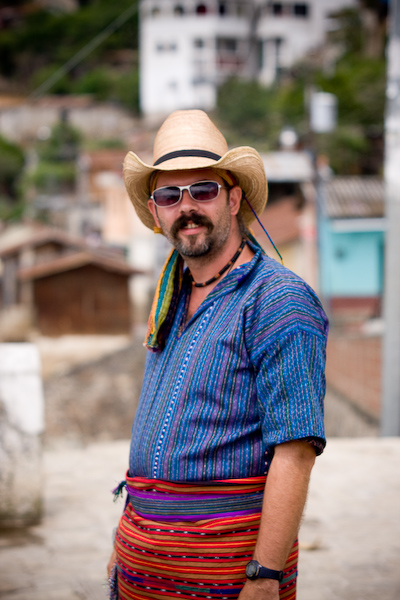 Josh in his new clothes

One more short ride took us north to Santa Catarina Palopó, a small fishing village. We had lunch at a restaurant right in front of the dock we arrived on; Keryn, Tash, Matt, Joe, Angie and I having small meals. Behind the restaurant was a school and the local children were playing ball games; basketball and football while a group in uniform practiced volleyball under direction from a teacher. On the docks repairs were underway and a few children fished, I saw one pull in a small fish on his line. Further out into the lake two men were fishing in their box shaped canoes; more canoes were lined up on the shore. We didn’t get further than the restaurant in this village, our visit fleeting. 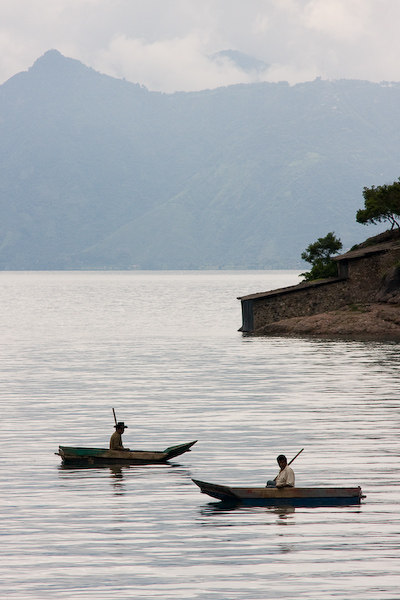 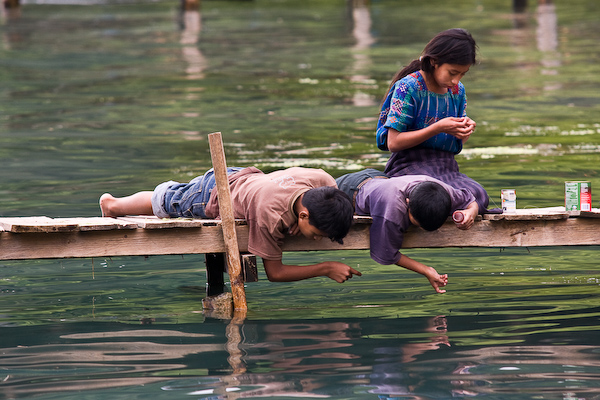 Line fishing off the jetty

We got back to Panajanchel mid afternoon and mooched around until evening. The Sunset Cafe was the venue for dinner and I dragged Keryn out early to see if we could catch the sunset. The rain and approaching storm largely put paid to that but we did see a sort of sunset, the sky between two volcanoes taking a ducky orange tone where the cloud cover wasn’t especially heavy. It was strange to see sunset, rain and lightning all combined in the grey and oppressive sky. The rain grew ever heavier as the sky darkened and we all ate while the skies opened up outside. Keryn and I didn’t stick around, Keryn’s dinner of hot chocolate and chocolate cake being let down by dodgy cake (she was still full after the big meal at the start of the day). Thankfully we didn’t have an early start the next day so got back to the hotel to try and get a full nights rest. 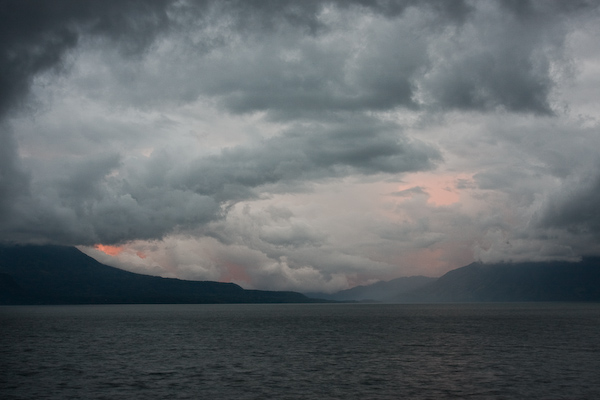