The journey back to Antiqua took a few hours and was notable only for the different road we came back on. The main road was shut so we took a narrow, windy little country road that was never-the-less in much better condition than the main road. We stopped to admire the view, our only real look at Lago de AtitlÃ¡n in the sunshine, and then drove on. We passed through an area of farmland, various crops being grown in the obviously rich soil. The land was neatly divided into plots around the larger plantings of corn. Everything looked vibrant and healthy, a picture postcard farming vista. 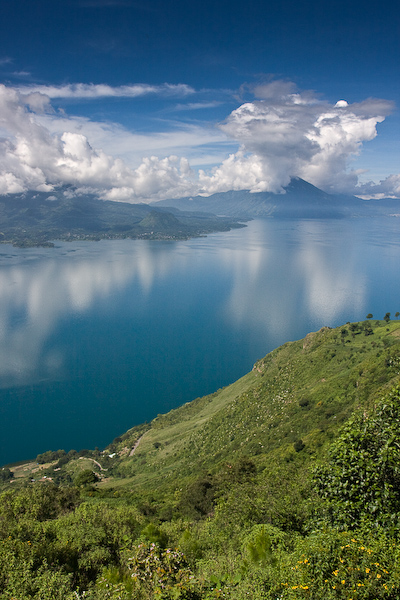 The afternoon passed quickly. Keryn and I headed to the post office with Matt and sent purchases back to New Zealand. Thankfully the post office was not busy as we had less than an hour and the whole time plus a little more was used as people went out to get boxes and money and then everything was wrapped, unwrapped so the staff could see what we were sending, wrapped again, further wrapped in brown paper and then addressed and then finally filling in the paperwork. Hopefully it all arrives in one piece.

The rest of the afternoon was spent typing or relaxing. Josh had arranged dinner at Frida’s, a Mexican restaurant, and only six of us went along (the rest organising their own meals). Along with Josh, Keryn and I there was Angie, all dressed for a night of Salsa later on, and finally two new people; Richard and Cecilya. This part of the trip ends tomorrow and we lose some people and gain eight more. The food at Frida’s was fantastic, very tasty and generous in portion. I had nachos and they were easily the best I had had so far on this trip, almost as good as mine ;).