It rained all night and continued as we got up for the 6am activity this morning. We were heading out to Volcán de Pacaya, an active volcano an hours drive away. The group was taken out to our transport which turned out to be a large yellow bus, the extra room required for the other people being picked up in Antiqua.

The journey was very wet, the rain not easing up and it looked like it would be a wet assent on the volcano. The roads we travelled on were often partially covered by little slips that had come down in the night. As we climbed the volcano road the already poor view was further hidden by the heavy mist and cloud. We pulled up in a car park and exited to discover the mist had also hidden the fact that the rain had pretty much stopped.

Most of the people in the bus purchased a wooden stick, required for the steep walk. It was mildly annoying to find the local kids selling sticks cheaper than those proffered on the bus. As a group we headed up the path which started steep and was a mixture of stones and concrete. As the concrete ended we were offered the option of a horse to carry each of us the rest of the way through the forest and a number of people took up the offer. Moving on the path got much easier…obviously they know what they’re doing by waiting at the end of a steep point.

The path moved up through the forest over the lower slopes of the volcano. It did get steep again a few times but was more than manageable. Coming out of the forest we could see views of the surrounding landscape through the clouds and swirling mists. We passed through an area of small buildings and large antennas, presumably communications and monitoring stations. At a small building the horse riders dismounted and we had a rest, here the scoria started and it wasn’t safe for the horses to continue. 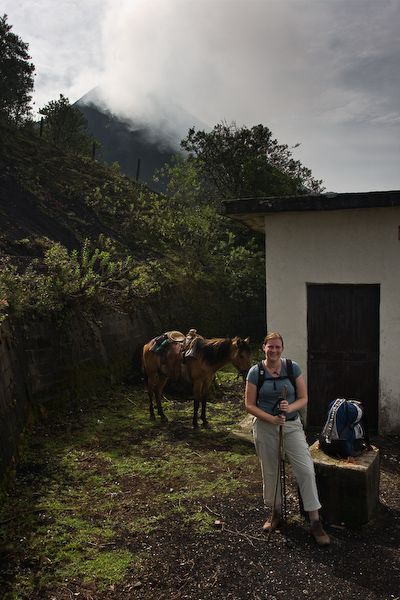 A rest after the climb through the forest 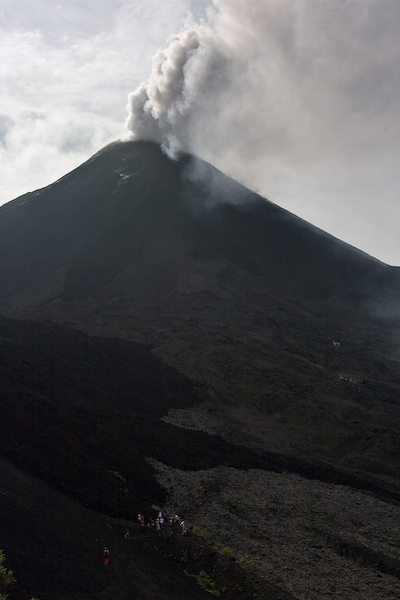 The first view of the peak

In single file we walked down a beaten path, slipping and sliding on the small black volcanic stones. The path took us steadily upwards after this and it took around half an hour of walking, clambering over larger volcanic rocks pitted and rough, to reach our goal. The lava flow started out as slowly cooling rock, warm and in places steaming, cracking into rough pieces from the long still stream of lava it had been. Then we came around a corner to find dozens of people milling around or sitting having a bite to eat. Beyond the people was a slow moving flow of lava, dull red and black as it was pressed up from some hidden river below. 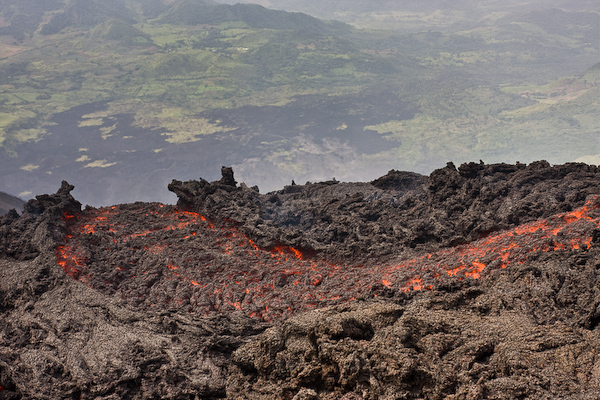 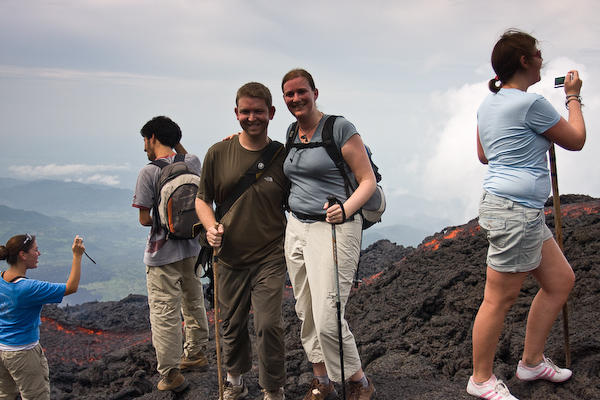 We spent somewhere in the region of thirty minutes getting closer to the lava, taking photographs and in some cases toasting marshmallows. The cooled rock near the active flow was still very warm in places, and there were vents of hot gas at various spots. It was uncomfortably hot within a few metres of the lava and this became even worse when the wind changed and scalding air was blown our way. It was certainly an exciting experience, any aches and pains from the walk soon forgotten. 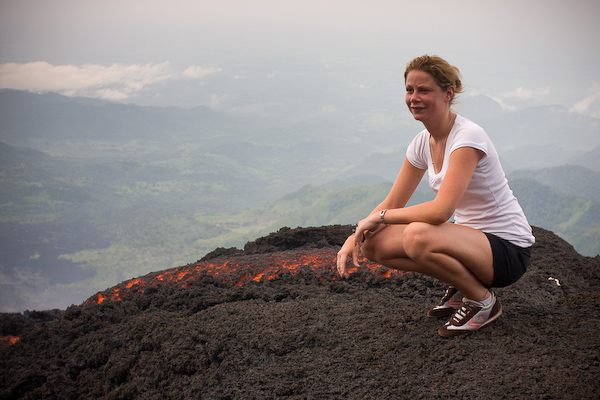 Jenny gets closer to the lava than I would have 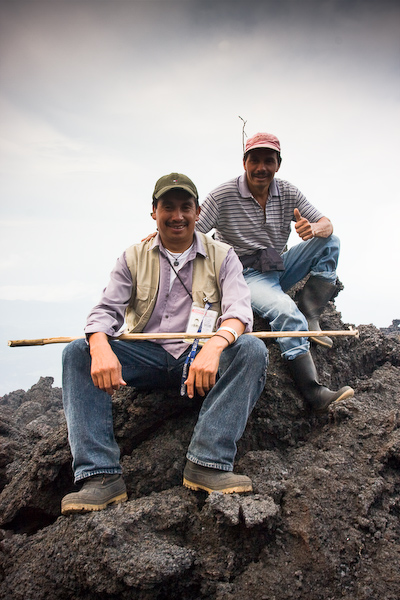 Before long the call came out for our group to descend. It took a while to convince everyone that they should leave but eventually we all started the return walk. Keryn had been worried that her knee wouldn’t be up to the walk but she survived OK. Her knee brace was put on for the trip down and what had looked like a slippery, steep walk up turned out to be not too bad on the descent. Keryn spent a lot of the downward trip talking to a Flemish lady who actually works with volcanoes in Iceland. She was in Guatemala to improve her Spanish and the lava was something she couldn’t miss seeing as there is nothing like the same access in Iceland. Back at the bottom we had a cool drink and a sit down before heading back to the bus. 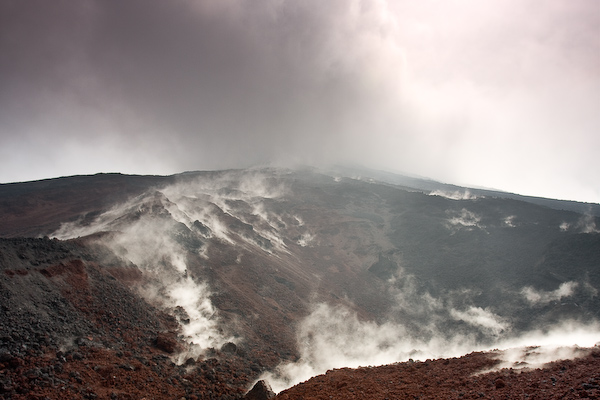 Looking to the peak 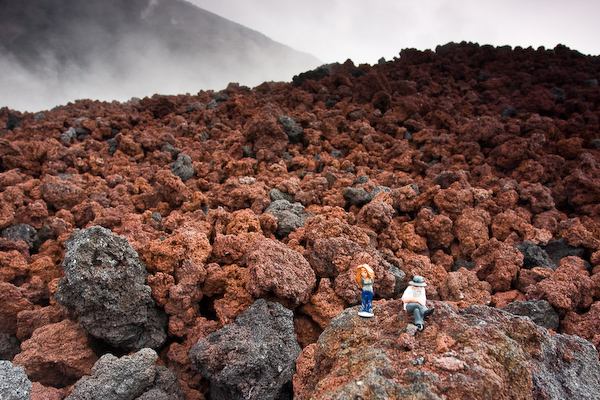 Our little plastic friends get a volcano experience 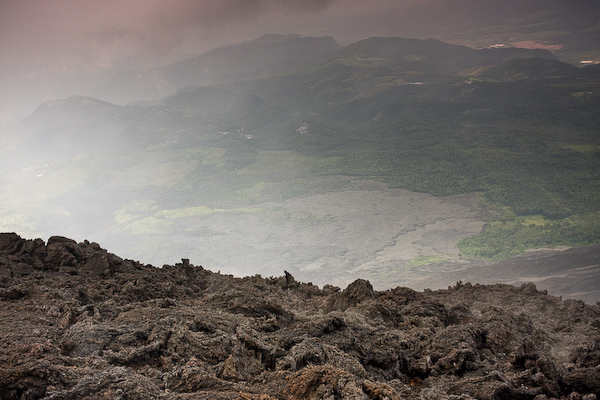 Back in Antiqua it was still raining and the rain continued for most of the day. It did mostly stop for an hour or so and we spent the time wandering the town looking for a t-shirt I had seen in Panajanchel – it had a volcano design on it I quite liked. We found it in the end after entering half a dozen different stores. Then it was back to the hotel to prepare for the combined final/welcome meal and to pack, wouldn’t you know it it’s another early start tomorrow. So that’s this part of the trip over, tomorrow we enter Honduras and start the most difficult part of our Central America journey. It should be fun!