The previous day we hadtried on clothing for our climb and when we arrived at the activity office our gear was ready and waiting for us, our names on the helmets at the top of the pile. There were eight of us from Famoo and a similar amount from Tranquilo. Once everyone had their gear on (consisting of a helmet, waterproof over trousers, a jacket, an ice axe, gators, a bag and a few other bits and pieces) we piled back into the vans that had picked us up from the campsite and headed towards Volcan Villarreca. 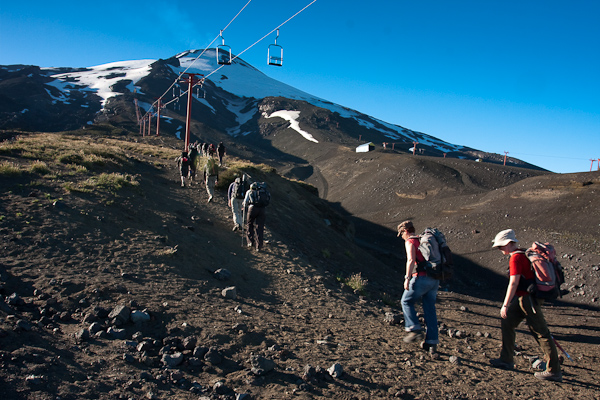 The climb started at the base of a chairlift which unfortunately wasn’t running and we had to climb up a rocky, scree covered slope to reach the snow line. I hung back with Keryn and we were some of the last to get to the snow, the climb not being kind on Keryn’s knee (or both of our fitness levels). Keryn had been joined by Maeve, a passenger from Tranquilo with similar knee issues, so I moved ahead a little bit when after a rest we started in single file to climb again.

It was warm enough and the snow compact enough that we didn’t need to use our crampons. We did however need to use our ice axes for balance and we were told to always hold the axe on the high mountain side, the better to assist in stopping if we slipped or fell. Following in the steps of our guides we walked slowly uphill, angling back and forth across the slope. It was tiring work and at the first proper rest stop (we stopped often for breathers) Keryn and Maeve decided that they couldn’t go any further without aggravating old injuries. There were lots of guides, some further ahead with faster groups and three with us so one of the guides stayed with Keryn and Maeve to see them back to the carpark. The rest of us rested and then set off again. 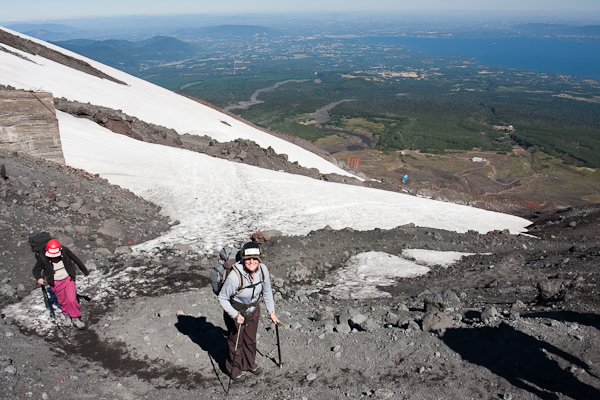 Keryn and Maeve making their way up to a rest point 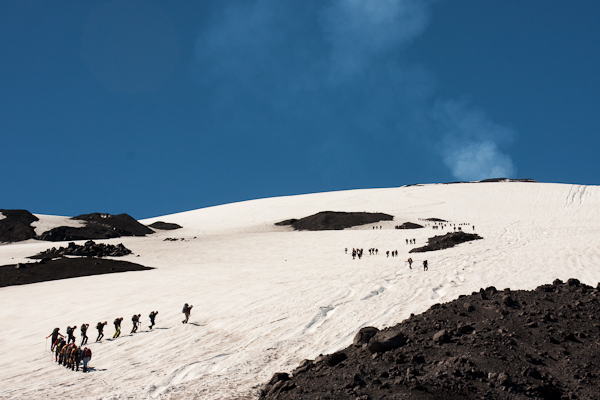 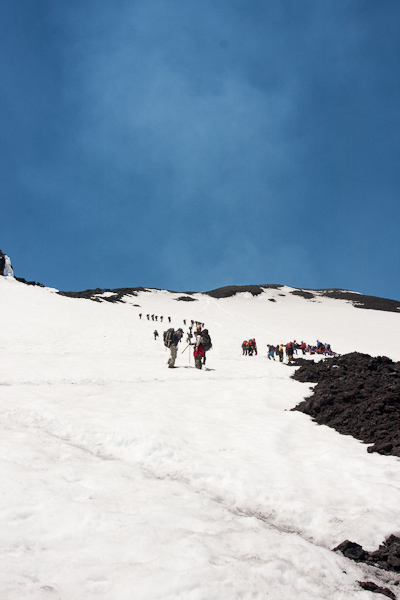 An hour closer to the top, doesn’t look that different to me

We crested a hill that had been obscuring our view of the peak and the vista revealed was not pleasant for those struggling with the walk. Fairly soon afterwards another four people decided to turn back leaving only five people in our now little group. The snow made distances impossible to calculate and we could only base our progress on the ant-like people we could see ahead and behind ourselves. Our guide gave us approximate times to get to the top but I suspect half the time he was just giving us what he thought were numbers that would encourage us. It took another hour and a half to get to the top trudging up the ever steeper slope and clambering over rocks the nearer we got to the goal. It was such a relief to make it to the summit and not have to walk anymore, though I didn’t rest and only stopped to take off most of the over clothes before wandering to check out the crater. 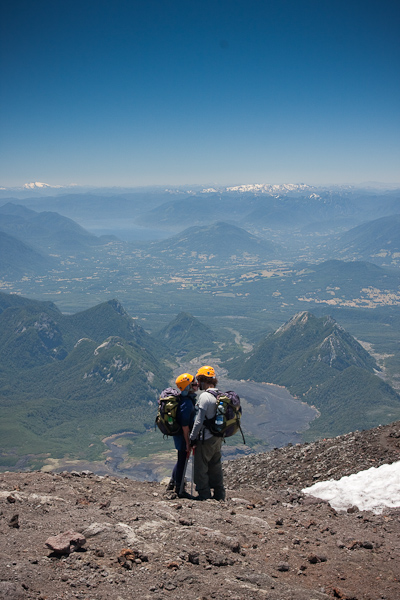 Happy to reach the summit I think 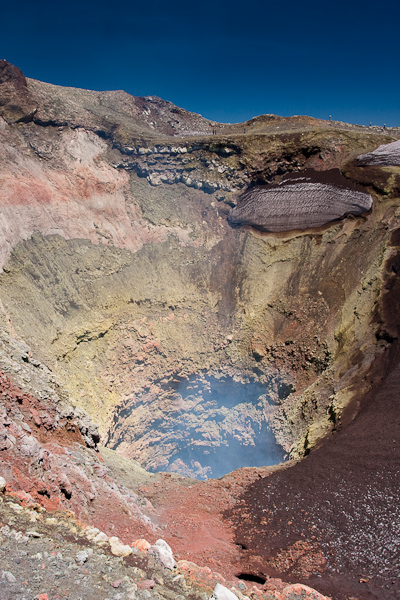 Looking down the crater

The volcano is active and it has been possible to see lava from the crater edge but unfortunately not today. There was gas coming out and I heard a few gas expulsion booms but in terms of photos I had to make do with the multicoloured rock in the crater; sulphurous yellows, iron reds and other minerals also thrown into the mix. A scenic flight plane did a couple of flypasts to provide a bit of interest in the blue sky and the views out to the distant lakes and mountains were spectacular. I had about twenty minutes on the summit before we all began to head back down. 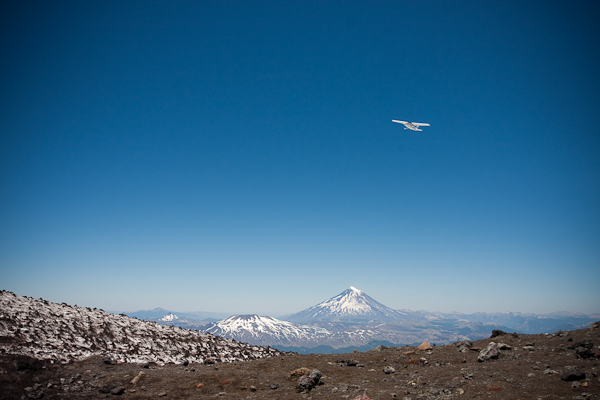 The scenic flight goes by 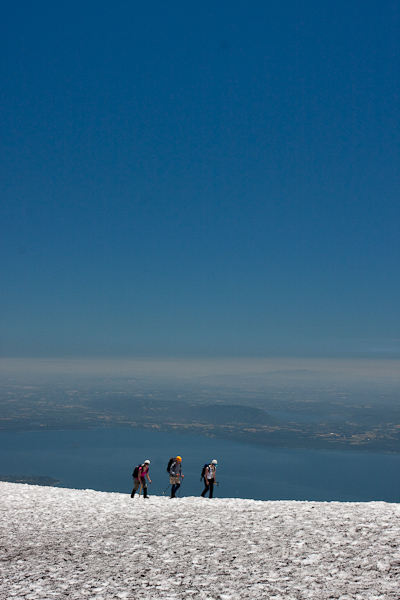 Other people on their way to the highest point 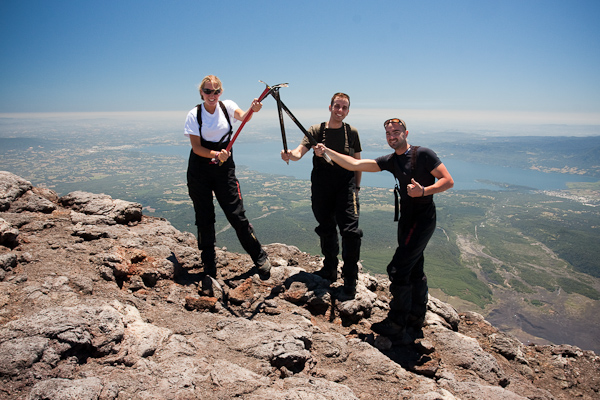 Katie, Antonio and a guy whose name I can’t remember from the other truck 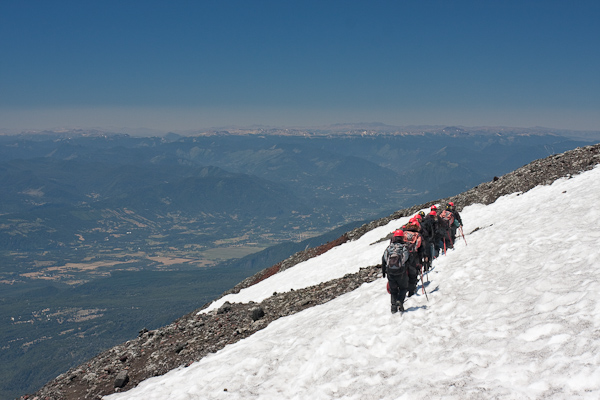 Thankfully we had an alternative means of transport for our return journey; we were to slide down on little plastic seats attached to our harness. This proved to be a fast, fun and very exciting activity, slipping down deep slides carved out by previous travellers. It got better when there were bumps and corners, it becoming increasingly difficult to keep to the correct line. I slid out of the track a couple of times and had to turn myself around using the ice axe and then start again, desperately pushing with the axe to get speed up before the following person crashed into me.

We went down four or five slides and the several hour trudge uphill became a twenty minute descent. We reached the end of the snow wet but in high spirits and had the opportunity to take off the wet weather gear, finding packed snow in various odd places.

We took a different path back to the carpark, walking down a scree slope parallel to the chair lift. Again this was a much faster path and most people were striding with big steps, clouds of dust raised in their wake. We reached the vans and put all our gear into the storage trailer and then waited for everyone to turn up.

We got back to camp and had showers, cleaning up before dinner. The evening was quiet for me and Keryn, our exhaustion sending us to get sleep early on.